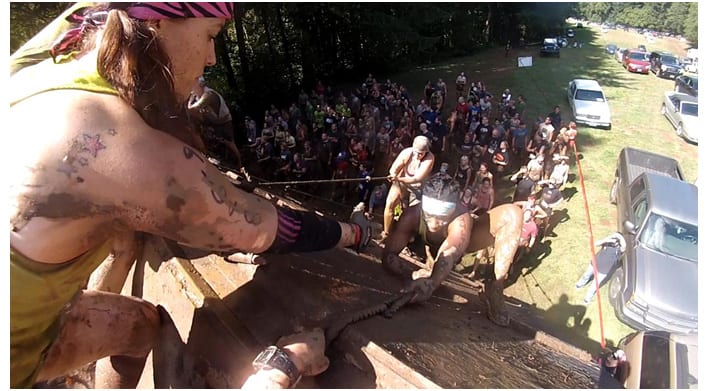 After collecting our intrepid posse of mud-goers and purchasing some last minute snacks and supplies, we wound our way down the hilly parade of cars to Horning’s Hideout in Tualatin, Oregon to run the approximately 5k Warrior Dash. Whilst parking on an absurd sideways angle, making it nearly impossible to open the heavy sedan door on the uphill side, my hubby/camera man yells out to the parking attendant, “Hey Mr. Horning!”, “Oh hey there!” he replies and waves. Fun fact of the day, my husband used to teach Mr. Horning, of Hornings Hideout, ballroom dance. How’s that for a small world. But I digress…

The one and only thing I don’t like about this venue is that the parking lot is so very far away from the race area. It’s quite the trek and it wasn’t well delineated which way to go. We generally assumed we would make like lemmings and follow the masses and we’d probably find our way. It was a bit like swimming upstream while playing Frogger with previously muddied participants making their way back down to the “rinsing pond” and back to their cars to change.

Registration was a breeze, they had the tents separated by men and women for ease of t-shirt distribution. I had failed as intrepid leader and forgotten to print my “I promise not to sue you if I get eaten by a bear” waiver, so we all split up to take care of business and agreed to meet back up “over there by the big blue dumpster”.

Next on the pre-race agenda – take a bunch of silly photos before we get covered in slime. But first, we had to find the porta-potty village. It was not where it was last time and took some searching to discover it was on the far side of the grounds past the finish line and muddy finishers. Insider tip: there are two more rows in the back, go around, don’t bother standing in line! 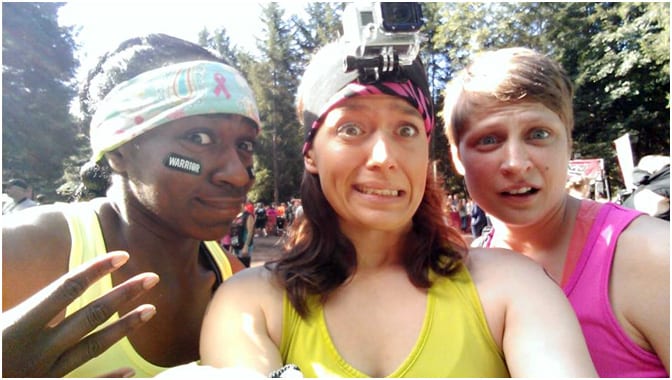 Now that the obligatory clean pics and light calisthenics had been completed we made our way to the starting chute. From experience, we made sure to be in the front of the line. We may not be the fastest, but there is nothing worse than getting stuck behind walkers on a steep hill! Momentum is the name of the game, a comfortable steady pace will get you up the first bump, but if you have to stop in traffic you’re pretty much doomed to walking the rest of it.

Camera activated, secured and adjusted, new line-friends made, emergency hair-tie replacement procured, some hootin’ and hollerin’, and we were off! 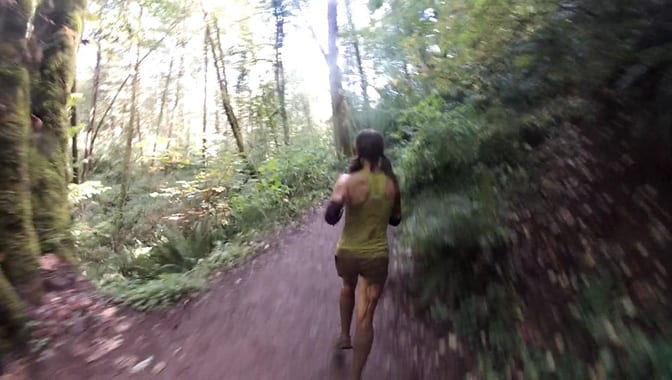 Recent rain, while calming the dust, had made the trails slippery and mildly treacherous. The side-angle foot-hold-technique was quickly implemented to gain maximum traction under our disposable-quality footwear. Par for the OCR-course, the first three-quarters of a mile was running, designed to thin the crowd before the first obstacle. 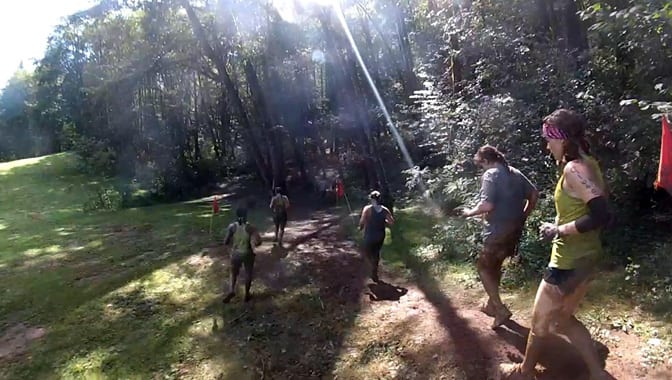 Around the first turn we found a pond containing Alcatraz – a floating barge of lashed-together container jugs covered in cargo nets. The signs warned of 5ft deep water requiring the ability to swim. I’m pretty sure we didn’t encounter anything over four, at the most. Though, there were steep surprise drop-offs. We made a girl-warrior train and waded our way to the “island” where we were “helped” by an overly-friendly stranger who apparently decided that: 1. We needed help and 2. our rear ends were an appropriate leverage point. I call shenanigans on our overly-gratuitous helper. Bringing up the end of our line, I made it quite obvious that I didn’t need a helping grope, er… hand, by launching myself in one pull, far clear of the water. The short jog across the top was surprisingly stable and after a hop and swim/paddle/wade we climbed out the other side. 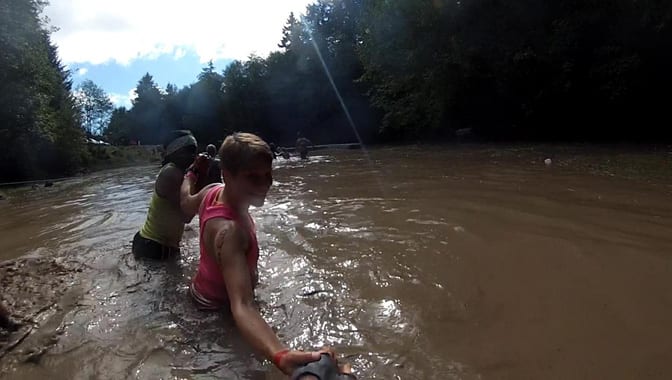 Next stop Mud Mounds – These felt more like mud trenches but, none-the-less, the object was to climb up a series short of hills and slide down into 6 foot pits with knee to thigh-high gooey-thick mud. All were achievable, though the course-sanded clay was a bit abrasive on short-clad heinys on the slide down. The last hill seemed easy, until my first push whence I quickly came to discover the suction from the mud required the assistance of my compadres to overcome. 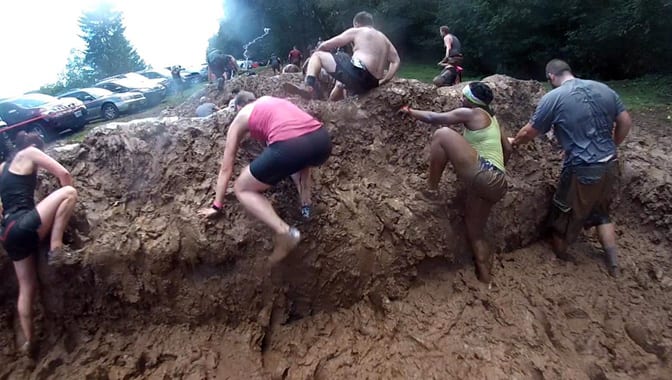 Thoroughly coated, we slid down a hill that I am still not sure was actually an obstacle. If it was, it was poorly planned as most sliders were careening under the path-delineating safety ribbon into parked cars and other out-of-control slidees. This scene did, however, provide much amusement for us when we had later returned to our car to change. We provided helpful commentary such as, “Coming in hot!” and “Look out!” to the smiling, screaming, wave of tushy-sliding Warriors.

At the bottom of this inadvertent slip-n-slide was an inclining and declining balance beam known as Two X Fall. We each executed our own modus operandi on this one. Genessa chose the traditional walking balance technique. I had previously trained this in a practice session at a gym using the bear walk method. Meanwhile, Jaimee decided that sitting and scooting was the safest route. All equally successful as we breezed through unscathed. 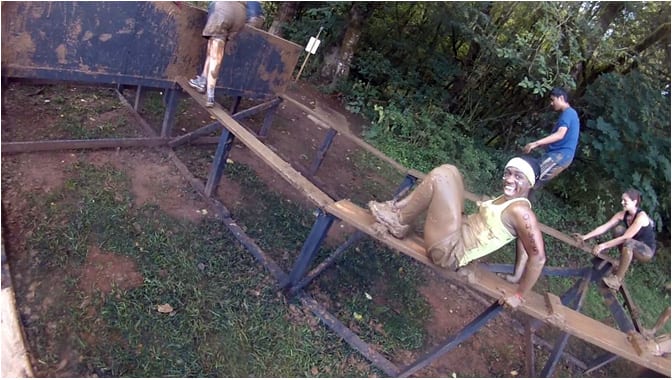 Up and over a steep bridge, we spent our time waiting at the top chatting with folks about the procedure of switching the GoPro without getting mud on the lense.

Next was a short version of the “slippery wall” seen in other OCR races but it did not have a rope. It was tall enough, and slippery enough, however, to require some strategy. In the end, a running start and two large, well-placed steps was the best method. Immediately following this was a series of 4 ft walls. Easy enough for anyone of a moderate fitness level. This was followed directly by what I can only describe as a backwards ramp. We climbed up the bracing to the top of a slick ramp. The challenge here is not so much the climb or descent, but in the landing at the bottom gracefully – a feat not accomplished by all participants. I managed to come out of it in an over-exaggerated hop that I hopefully pulled off as gracefully as my three years of ballerina school could affect. 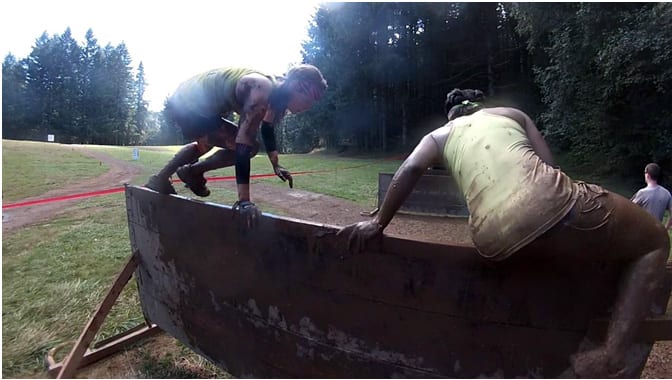 We next ran, crouched under some netting – Storming Normandy. Perhaps the intention was to crawl. I would have rolled. But with things like this it’s sometimes best to go with the status quo. 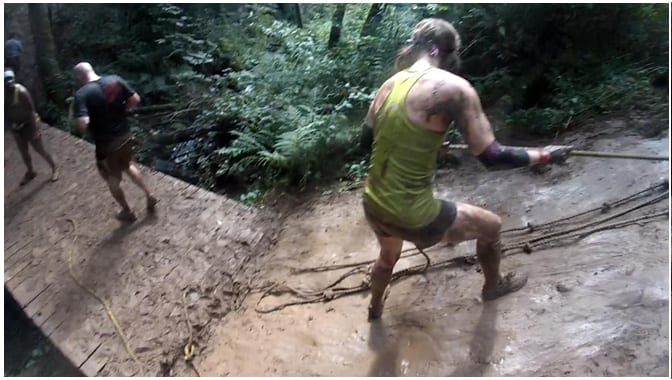 After repelling down a steep slippery hill, we came across the Giant Cliff Hanger – a large angled wall with a rope and intermittent footholds. It’s interesting to see the different techniques implemented to ascend this obstacle which are telling of the experience level of the participant. To easily pass this gatekeeper, though, one must trust in physics over body strength. 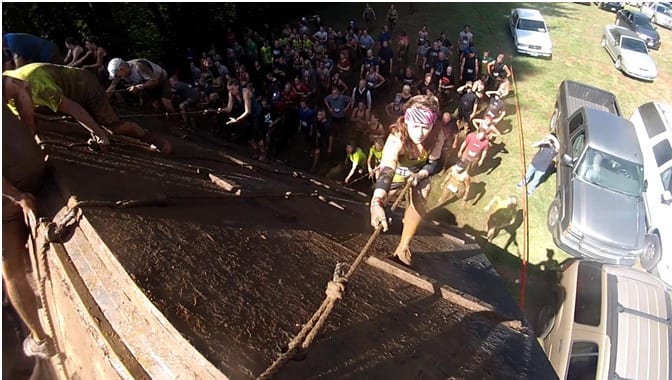 Another variant of an up-and-over wall, a horizontal cargo traverse, and a vertical cargo climb led to another OCR staple, the fire jump. Hand-in-hand we leapt the dual set of Durolog flames, the last step before a dunk in the mud. Just in case you hadn’t yet been thoroughly coated, a quick dip in the hip deep, thiiick clay mud should do the trick. Then it’s just a quick belly slide to the finish line! 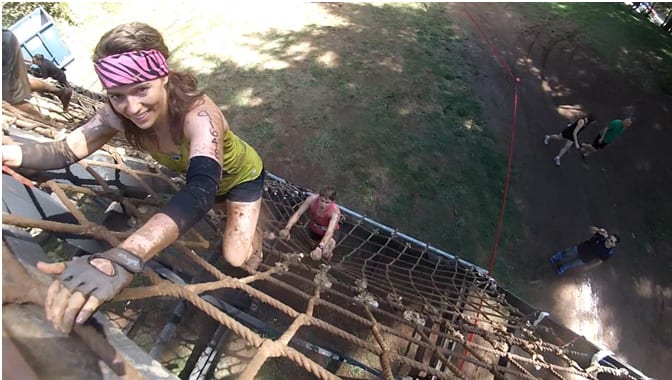 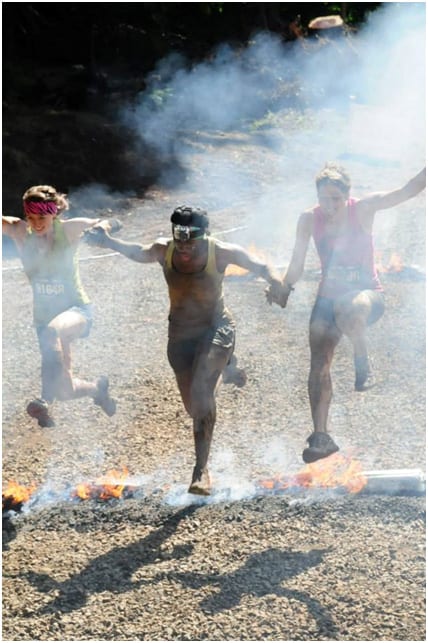 Now that we had completed our muddy adventure we took a quick dip in the pond to rinse off, attempting to ignore the fact that the lukewarm water wasn’t much more clean or sanitary than the mud we were trying to remove. It was, however, much quicker and less painful than spraying down with freezing cold hose water. We then hiked back to the car to change and heckle jestfully the previously mention bottom-sliders.

Returning to the lower festival area we sat on the grassy hillside and proudly mowed down our Turkey legs and rocked out to the live band on the big stage before hitting the swag tent and making our way, proudly, tiredly, and triumphantly back to the car to return home sporting fuzzy horned Warrior helmets and still-muddy finisher medals which conveniently double as bottle openers. 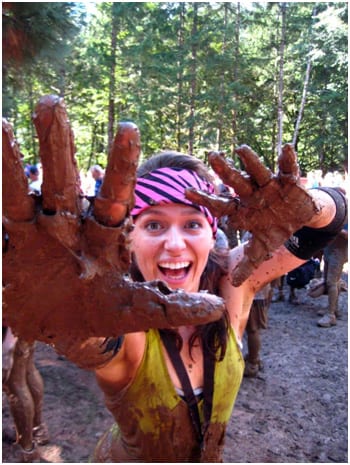 I like this race a lot. The first time I ran it, three years ago, it gave me the OCR bug. It’s a great starter race for those who those who want more challenge than pink inflatable slides and bubbles, but who aren’t quite brave enough or prepared for a Spartan or electrocution. As a seasoned short-OCRer this was a quick and fun race with just enough challenge to keep it interesting. I enjoyed taking my first-timer friends through and seeing them take on the challenges, and the pride and excitement they had for rest of the day after conquering the beast they had been so nervous to face in the weeks leading up to the race. 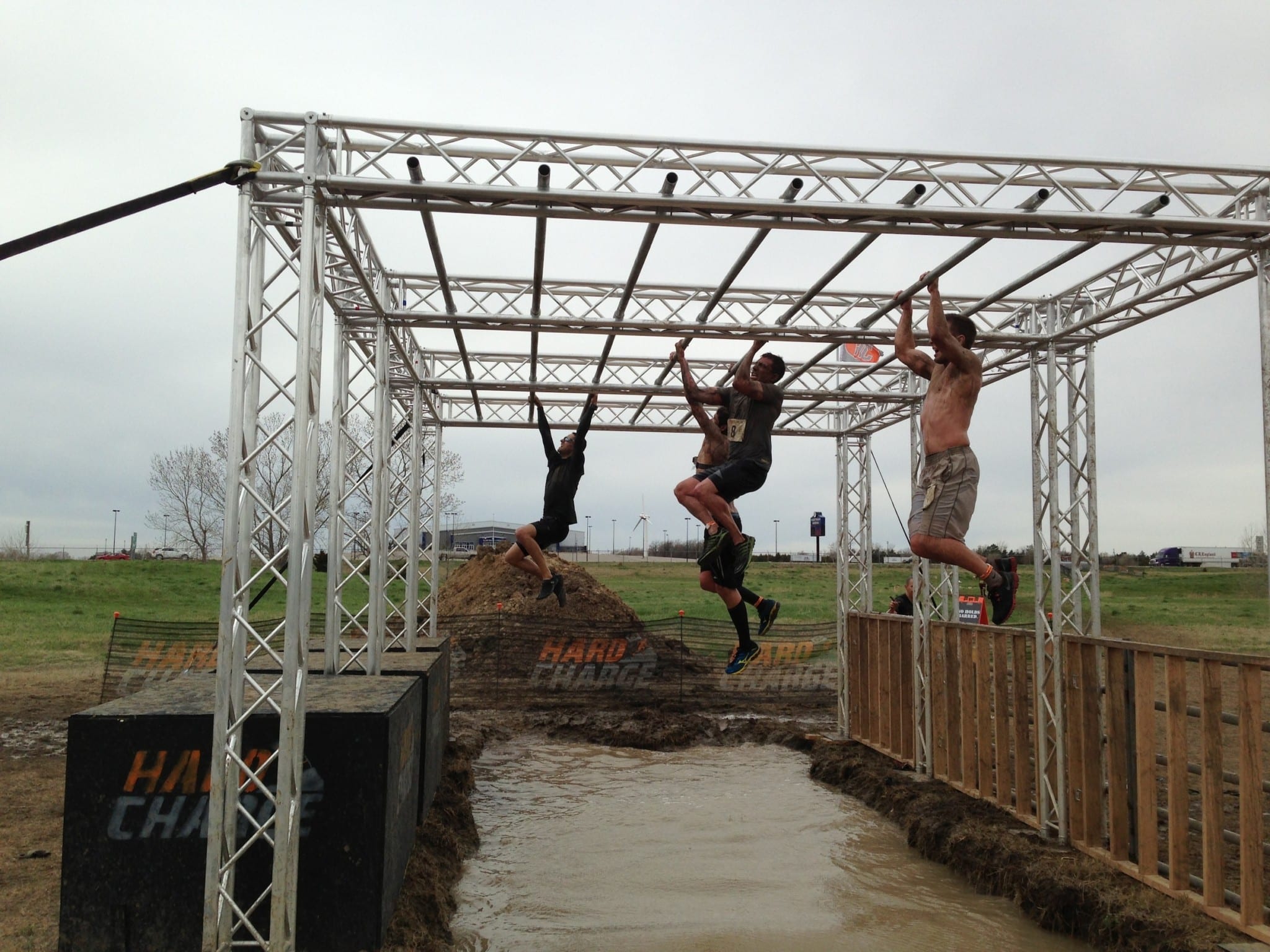 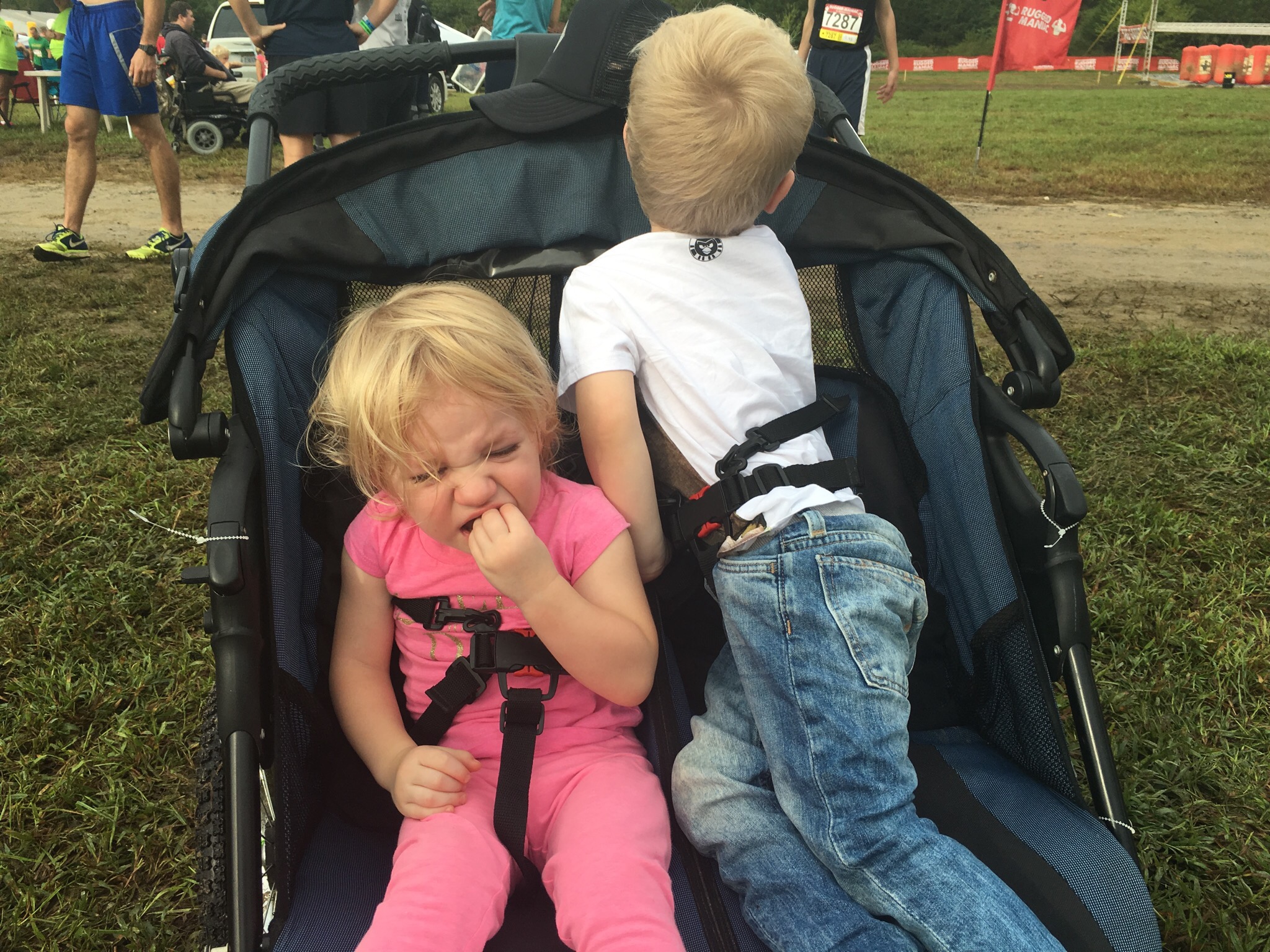 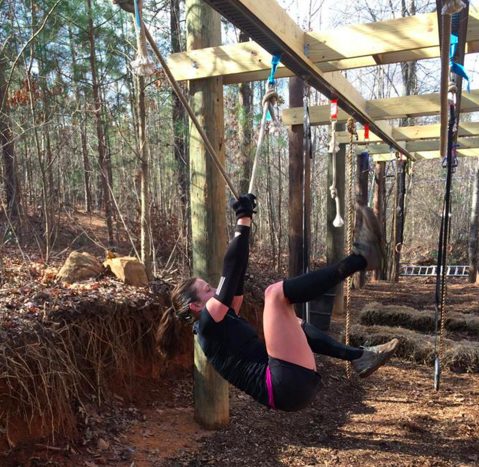 With OCR season officially off to a start, Conquer the King II was a great local Georgia race…