This morning was decidedly atypical. I usually begin a race day by throwing a few Clif bars, a bottle of water, a roll of tape, and other common OCR kit items in an old backpack, then I’m gone as early as possible en route to the event. If I see anyone else in my household those mornings, chances are they are shuffling down the stairs and still half asleep while I’ve got one foot our the door. But, today I walked into the kitchen to find my wife making sandwiches, chilling juice boxes, and packing multiple sets of dry clothing for my kids. It was as if we were headed out for a relaxing day on the lake instead of a mud run. I was already showered and in street clothes to boot. To say this felt odd would be a gross understatement. This was just plain weird.

Why such drastic changes to my pre-race routine?

Earlier today, I headed out to Savage Race for the second time this year, but this time I wasn’t running a single stride. This time, I brought my son to run the Savage Jr giving him his first experience with OCR. Rather than being a racer, I played the part of a coach, tour guide, cameraman, snack dispenser, beverage buyer, umbrella holder, and general supply mule. While it definitely seemed strange to be on the grounds and not run the race, it was every bit as exciting to see him run his race and see the sport through his eyes.

Ever since I came home muddy and bloody from my first obstacle race with that shiny new medal around my neck, my son has been enamored with the idea of racing himself. He regularly asks to watch the promotional and recap videos all of the big races have on their websites, Facebook, and the like. He’s also been watching American Ninja Warrior religiously since he discovered it channel surfing this year. Most kids know the names of the players on their favorite professional sports team. Mine knows the names of the guys who’ve made it to Vegas and subsequently to the top of Mount Midoriyama. He even wants to know if they have trading cards. Knowing this, when I mentioned to him there are obstacle races just for kids, he couldn’t think of anything else. So, I registered him and prepared for the barrage of questions about OCR I was about to receive from that day until this one. 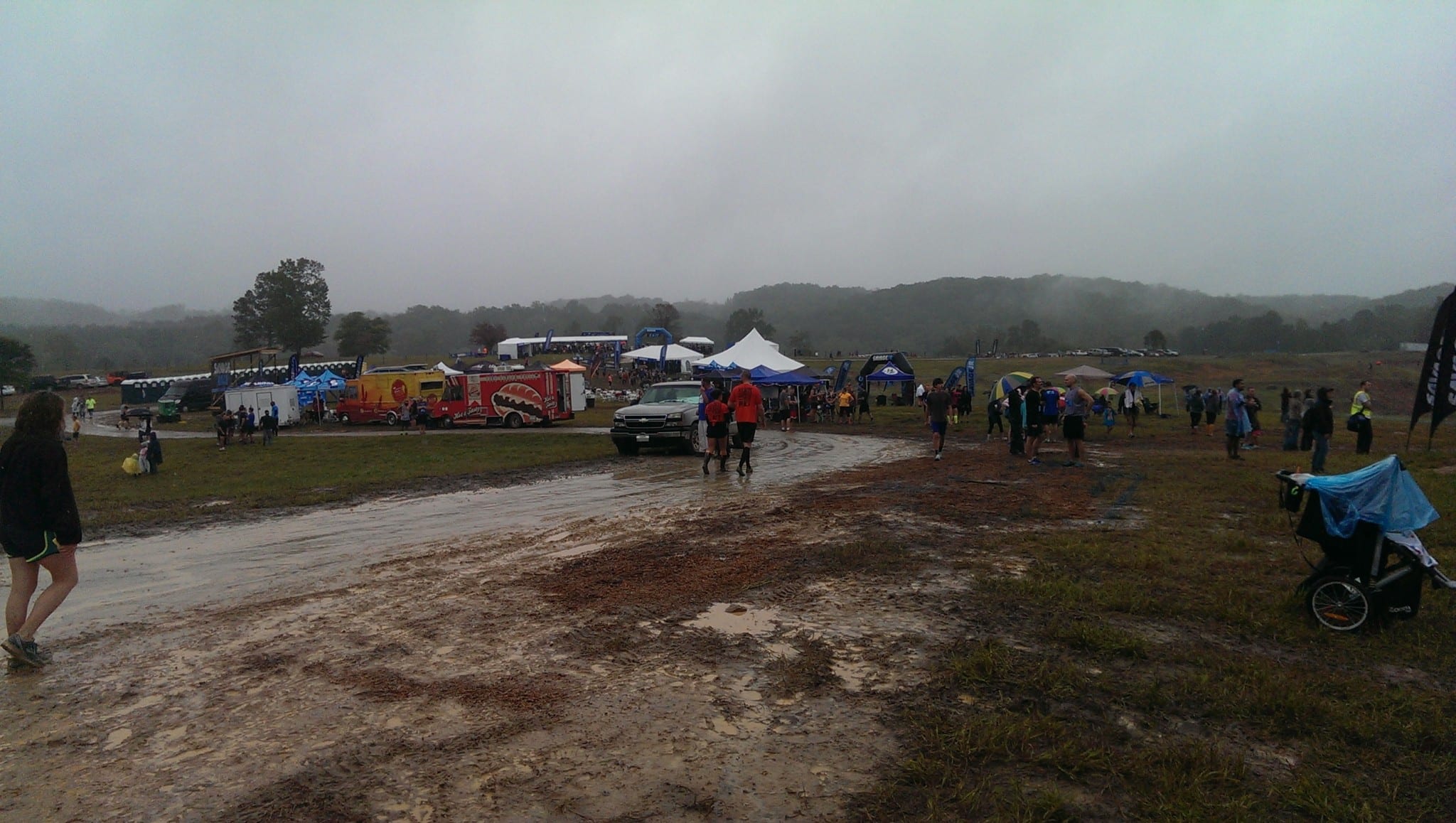 It had been raining across north Georgia non-stop for a few days. It was cold and wet, and I knew the course would be extra muddy for him. Pulling into the venue, through the rain falling and the tall pines, he caught a glimpse of Colossus. His eyes went wide, and he leaned forward in his seat scanning his surroundings for other obstacles he’d only heard about from me or seen on a computer screen up until that point. There are no words I could write to adequately describe the level of excitement that he’d achieved at that moment. We parked, checked in, signed waivers, attached his bib without issue and had plenty of time to wander the festival area, which was my plan from the beginning. I was fairly certain the Savage Jr wouldn’t take too much time, and I knew he’d get a kick out of seeing as much of the adult Savage Race as possible. He got to check out Sawtooth and Blazed nearby. I wandered over toward Wheel World since that contraption was introduced after the spring race in Atlanta, and I had yet to see it in action. Finally, we walked over toward Colossus just in time to see the first finishers from the Savage Pro wave cross the line, which was a big thrill for him. After he contained his excitement, he applauded for the winner, which only made me prouder. As an added bonus, he recognized Neil Craver, from American Ninja Warrior, who took second place, in what was his first OCR as well. 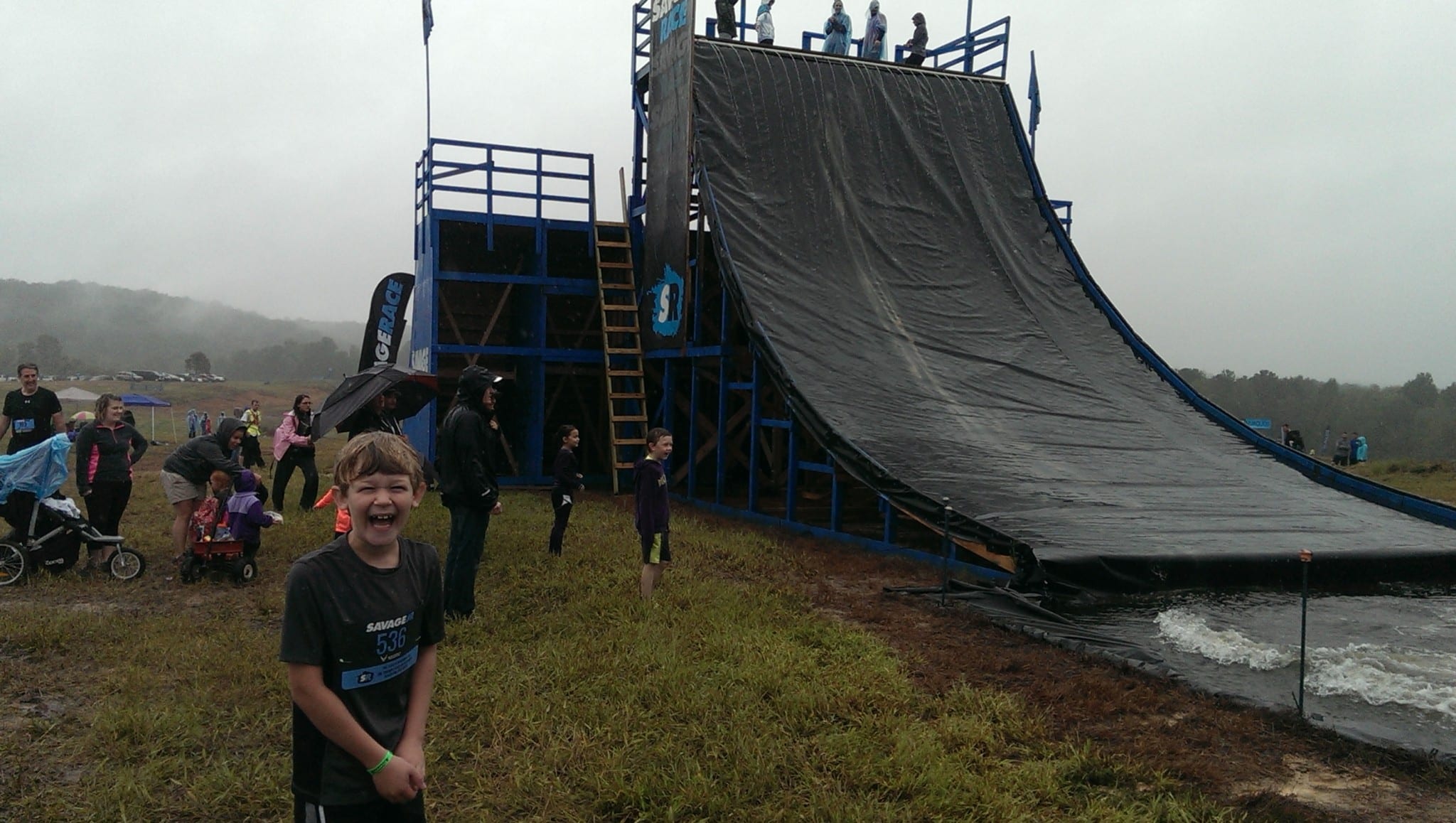 We walked back toward the festival area and checked out the Savage Race merchandise to get a break from the rain and meet up with the rest of the family who had just arrived and made it through the spectator check in. Lots of hugs were given and pictures taken. You couldn’t get this kid to stop smiling if you tried. Despite the poor weather, spirits were high all around. After giving my son one last slurp of Gatorade (and convincing my daughter the mud on her feet was no reason to cry), it was time to queue up for the race. From where I stood, it looked like either the cold or his nerves were getting the better of him as he listened intently to the instructions from the race official. 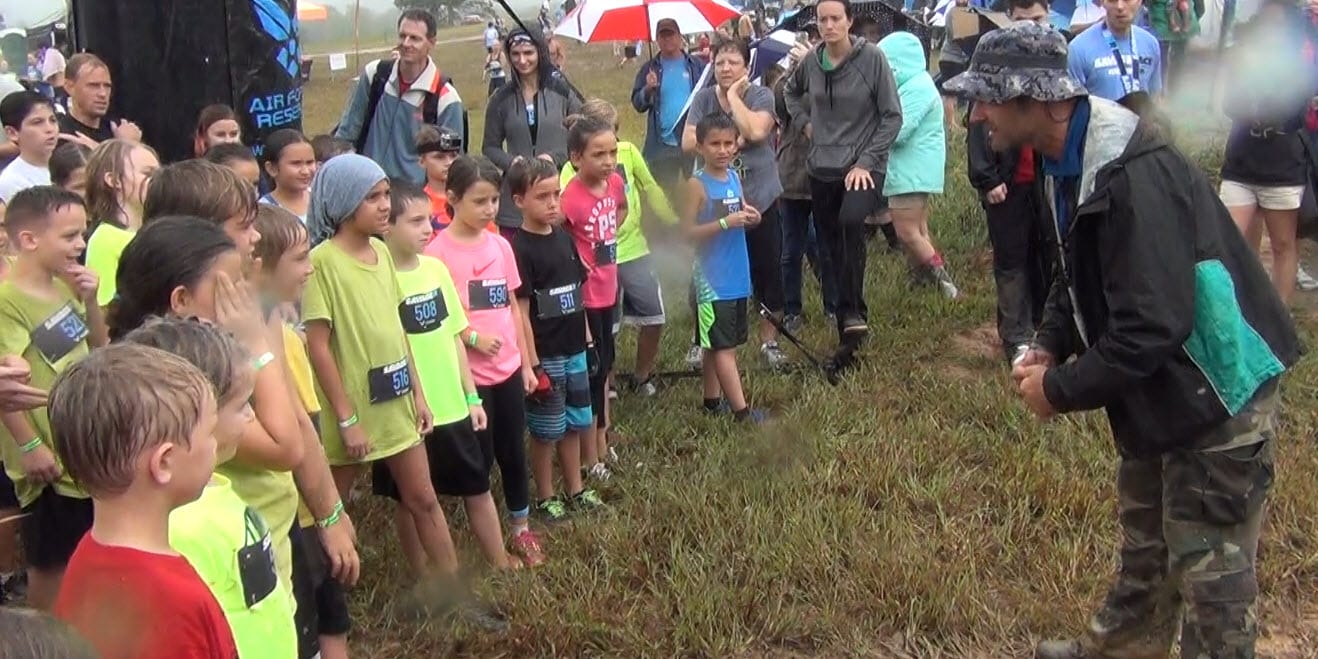 Suddenly, he was instructed to give a “War Cry” – which he did with great enthusiasm. 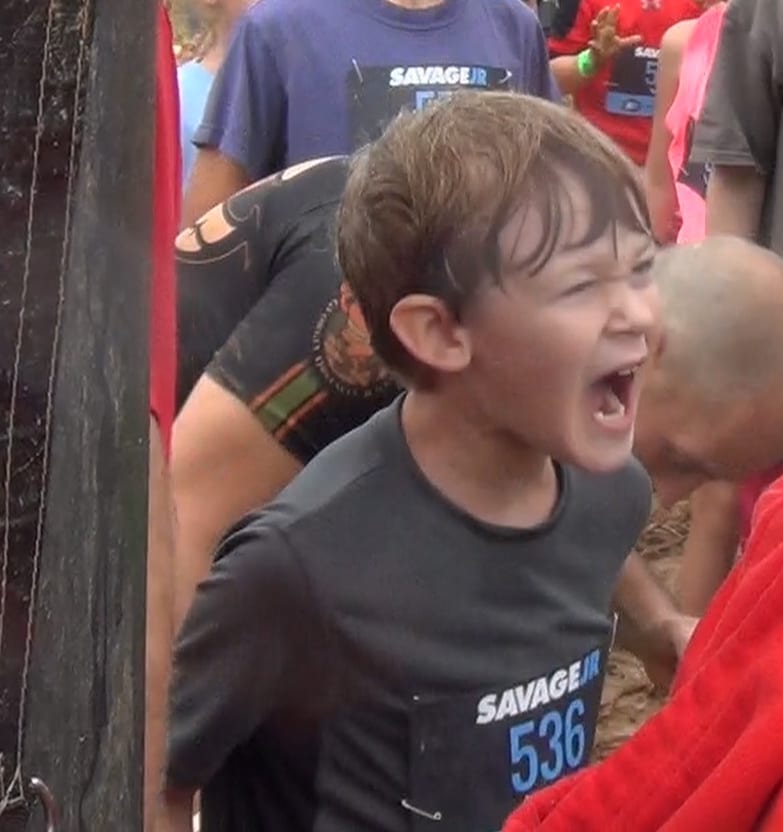 Now, it was a struggle for him to wait for the signal to start running as the War Cries rendered every kid in attendance unable to keep both feet on the ground. And they were off.

I watched and filmed as much as I could slogging through the mud. The race began with a long straight away with a few hurdles evenly spaced along the entire length of the course. Some kids jumped over them and others crawled under. After the last hurdle, the race curved around nearly 180 degrees and turned downhill to a pair of pipes the kids were to slide down though there wasn’t much sliding involved. According to my son, he had to work his way down a bit more of a scoot than a slide.

The kids were then emptied out just before some blue plywood A-frames they all simply referred to as ‘the triangles’. These proved to be quite slick and gave my son the biggest challenge of the day. He worked hard to pull himself up, then threw one leg over, similar to the method a lot of adult racers use to reach the top of Colossus, and finally slid down the back side.

Next, came a steep uphill climb to cargo netting under which he had to army crawl through the mud. Unfortunately, I was unable to see this first hand, but another family member caught video of it, and it was definitely a highlight of the course. This particular obstacle was most similar to one a racer would encounter on the adult race, so it’s likely not a coincidence it was his favorite. Another 180-degree turn and it was downhill again to deep mud where many shoes went missing and many of the smallest racers were stopped in their tracks. My son was briefly detained by the mud here as well but found the setback hilarious. He wasn’t able to stop laughing even falling over a time or two trying to get his shoes free-another highlight to be sure. This was the home stretch. The final highlight wasn’t so much an obstacle as it was a bonus. A mountain of bubbles was formed just before the finish line for the kids to run through. It didn’t do much to slow any of them down or clean the mud off, but the kids were obviously entertained by it. Even kids too young to race who were there cheering on their older siblings had the chance to play in the suds that had spilled over the sides of the course barriers. (This proved to be the perfect distraction and the eventual cure for my daughter’s aversion to muddy feet mentioned previously, so thank you to whoever was responsible for coming up with the bubble idea.) 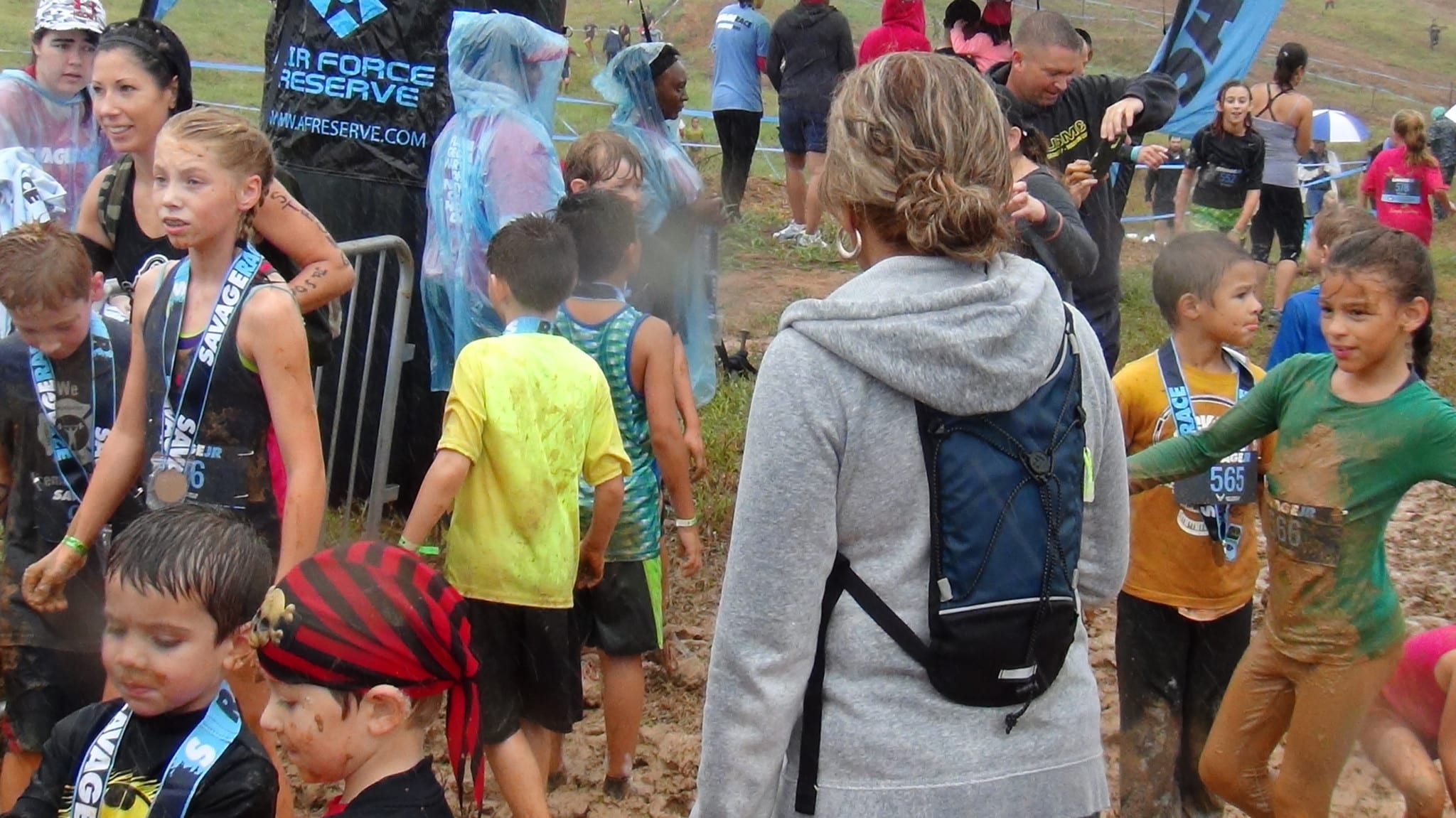 After he crossed the finish line, again nobody in our group could get enough hugs or pictures with him. I couldn’t help but laugh that he was so thrilled to be covered in mud; yet, he wouldn’t touch his medal or his Savage Race Finisher t-shirt for fear of getting them dirty. These were the trophies he’d worked so hard for, and he was going to guard them like gold. I know how he feels. I didn’t have much exposure to sports as a kid, and my OCR medals are my trophies too. There’s nothing like feeling that weight around your neck! Minutes later when things settled down, he told me he felt great because he had fun and finished the race. When asked if there was anything he didn’t like about the race, the answer was a resounding ‘No!’. When asked if he would do it again, he said, “Yes!” and asked what other races had kid versions he could run. He couldn’t have asked me a better question because it was validation for me that I’d found a sport we could participate in together for years to come. I’ve helped coach his soccer teams when needed, and while interactive, it’s just not the same feeling, so this revelation is definitely historic for us personally. I assume if you’re reading this, you already run OCRs or at the bare minimum, are interested in doing so. If you have kids, I highly recommend bringing them with you to these events. Neither you nor they will ever forget it, and you will have an unparalleled bonding experience. I know we did. 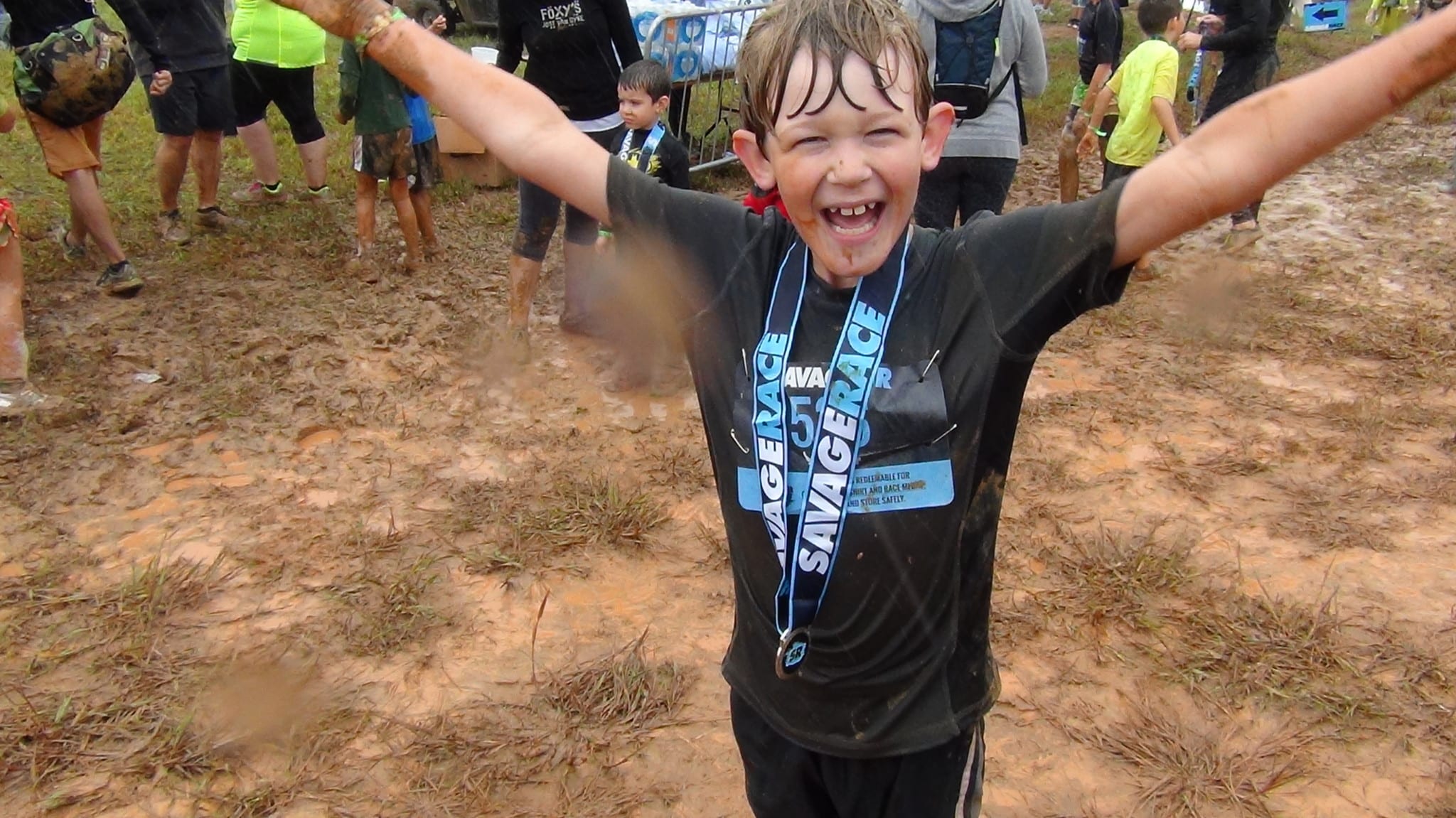 Admittedly, he did say he thought the obstacles would be a little harder. In his words, the race was easy but not too easy. Kids over eight years old run two laps so that definitely tested his endurance, and I did remind him that kids a lot younger than he had to be able to complete the race as well. My biggest concern with him going into Savage Jr was that he’d built up his expectations based on hearing me relay my experiences with the Savage and other OCRs which, of course, involve much larger, more intense obstacles he certainly wouldn’t see in the Jr race. As literal as kids can be, it’s likely he was envisioning a miniature version of the full Savage Race with all the same obstacles simply reduced in scale. I was afraid for a while I’d set him up for disappointment. While he did tell me he wished his obstacles were bigger and more dangerous, for lack of a better term, at the finish line it was quite evident he loved every second of it and it still exhausted him like a good OCR should. My boy raced like a champ today. He ran hard and attacked every obstacle like he was on a mission. I couldn’t be prouder of him than I am now. He’s headed to bed soon and still has his medal around his neck.

We’re starting to wonder if he’ll ever take it off. 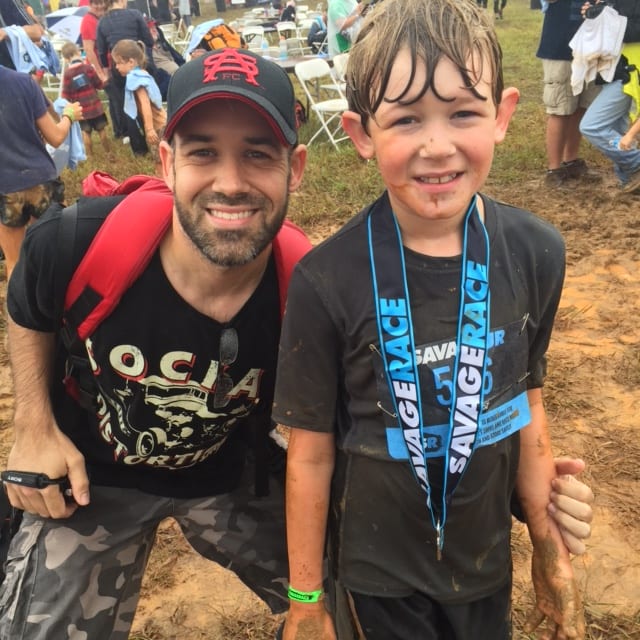 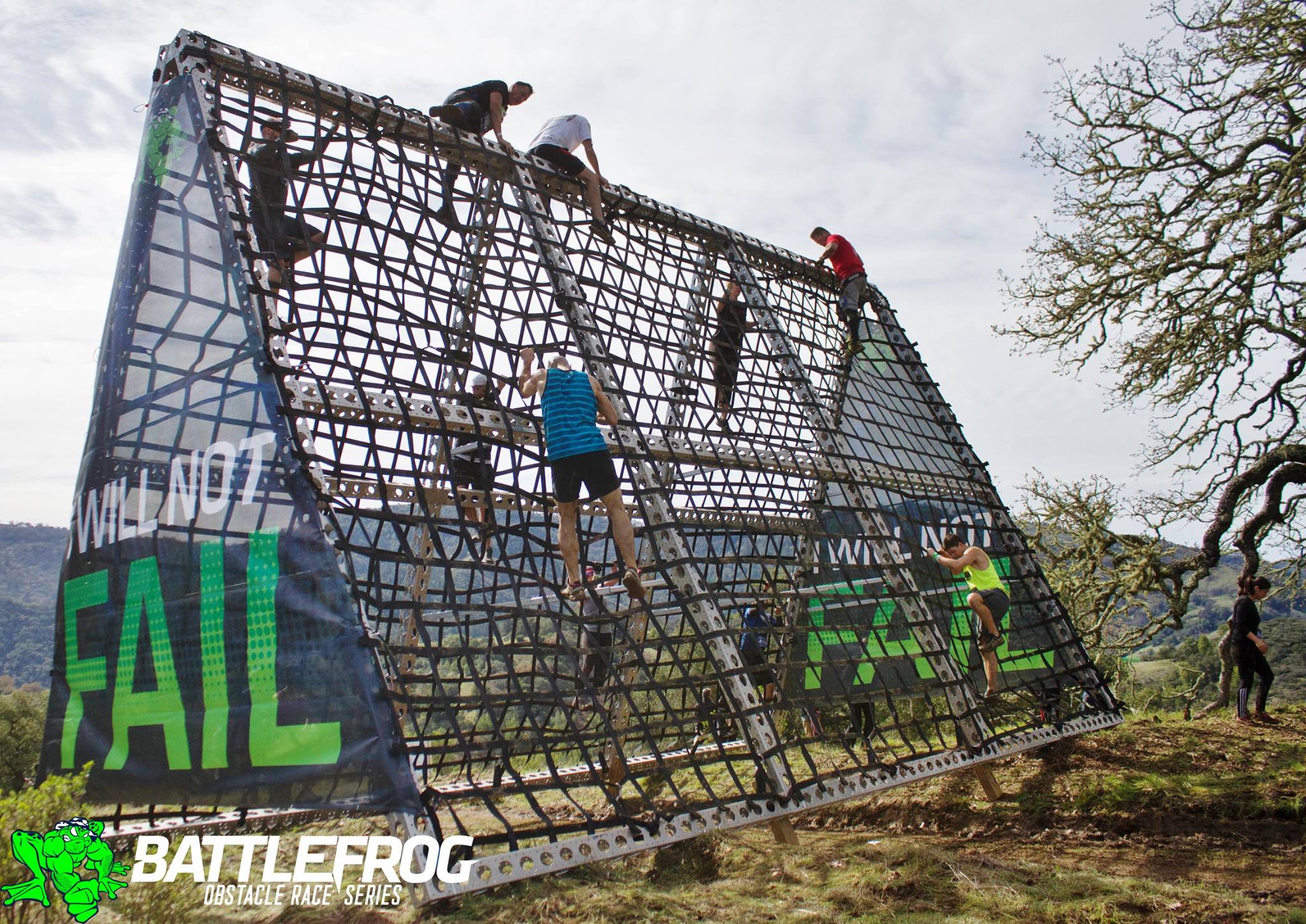 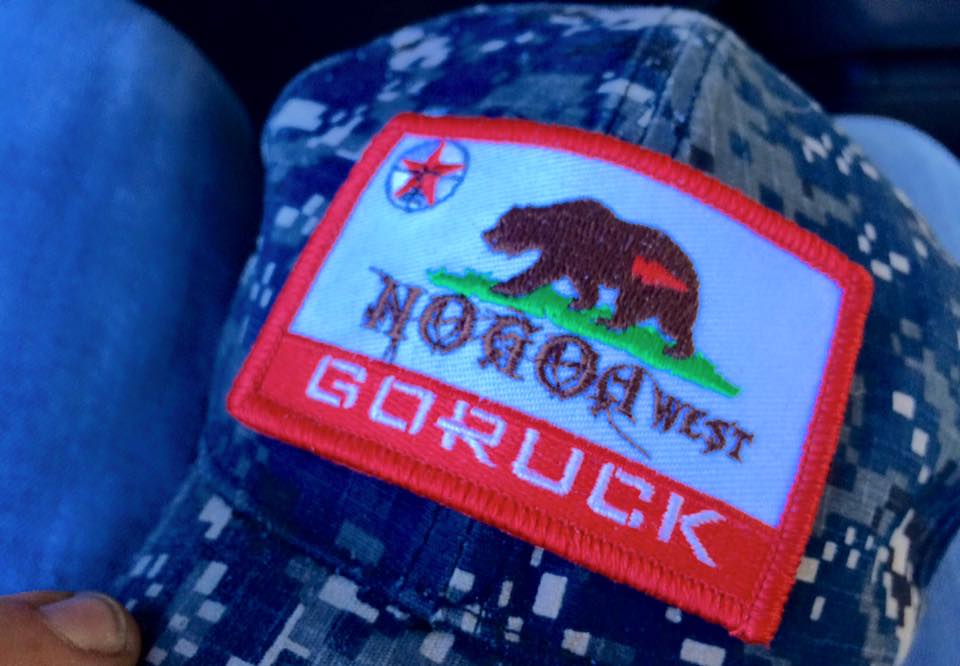 The final GORUCK NOGOA (No One Gets Out Alive): NOGOA West 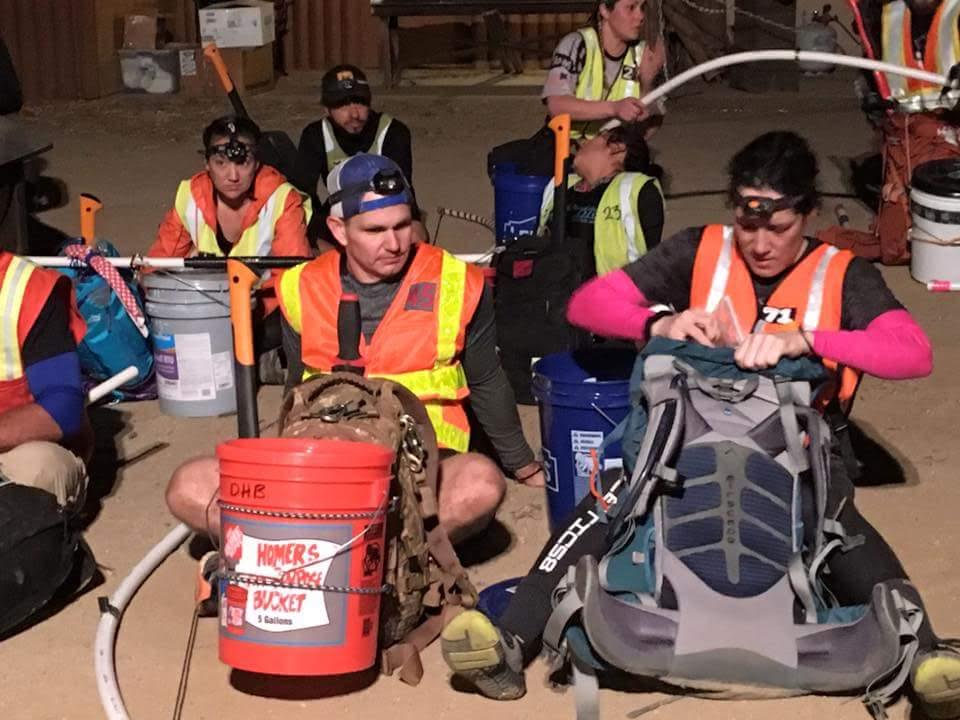 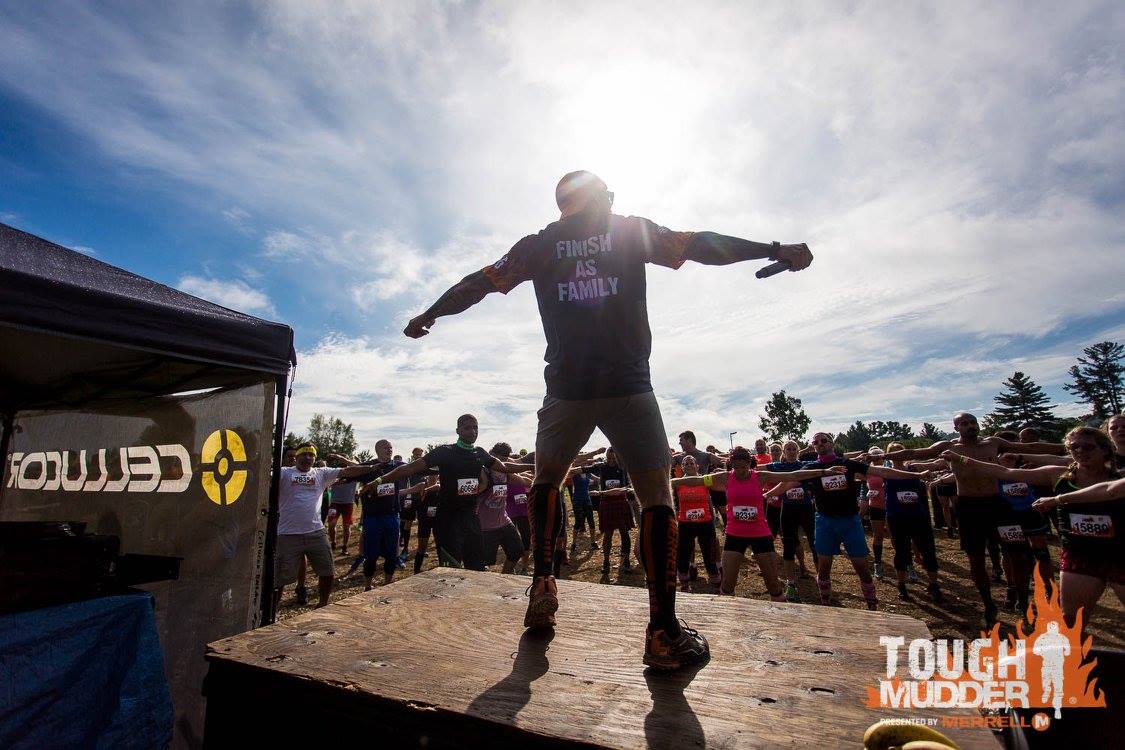