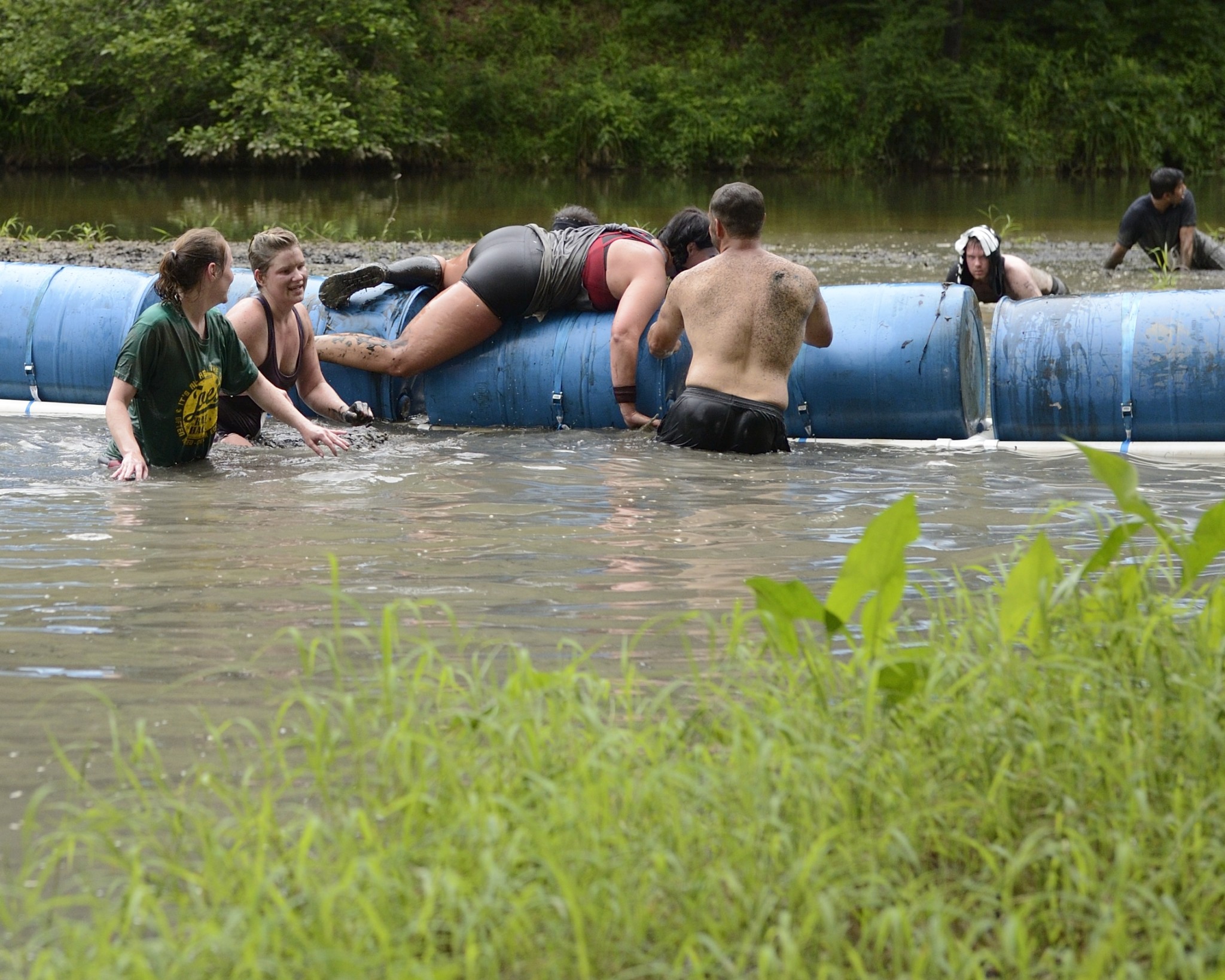 Tell me there’s a new obstacle race being hosted in Alabama and you’ve absolutely piqued my interest (Alabama has put on some amazing grassroots obstacle course races this year as previously raved about on ORM!) Now tell me the race is called “Mud Duck Mudder” and I’m not only beyond intrigued, I’m registered and I MUST GO!!!

And this is how it came to be. Last month, I hit the road again for the promise of another amazing “Alabama race experience,” all the while mulling over as the miles of driving flew by, what unique twist would define this new race on the scene.

What’s in a name?

With a name like Mud Duck Mudder, I just knew there had to be some meaning behind that name. Indeed there is and it’s really, really neat – you’ll get a lump in your throat kind of neat. The Mud Duck Mudder was held on a portion of the 1,200 acres of the Cornerstone Ranch, a faith-based organization that ministers to young people through spiritual guidance and outdoor recreational activities. One of the race directors grew up fishing with his brother, Danny, on Cornerstone’s property and his brother was notorious for getting dirty and muddy playing in a ditch near their house, coining him the nickname “Mud Duck.” Sadly, Danny passed away just over 2 years ago. In the words of his brother, “Danny was always helping other people, had no enemies and is in a better place now leaving nothing but good memories behind.”

In a wonderful tribute to his brother, the Mud Duck Mudder came to fruition with the partnership and support of Cornerstone Ranch and many community-based businesses, honoring “Mud Duck” and his fondness for playing outdoors and getting muddy. As I crossed the finish line, I knew that Danny would have been proud of what his brother and many others had worked hard to create in his remembrance. The race was incredibly challenging, the grassroots VIP feel that I’ve come to love and appreciate at other fundraising/charity-based races was there, and a total sense of racing for the joy of racing was ever present.

Let there be no mistake, the name Mud Duck Mudder might imply some easy, fun splashes through mud pits and call it an obstacle race. This couldn’t be further from the race experience I had! True to form, as advertised on their website, the Mud Duck Mudder was intent on challenging it’s racers by drawing on the natural terrain as the course highlight. They delivered, and then some! 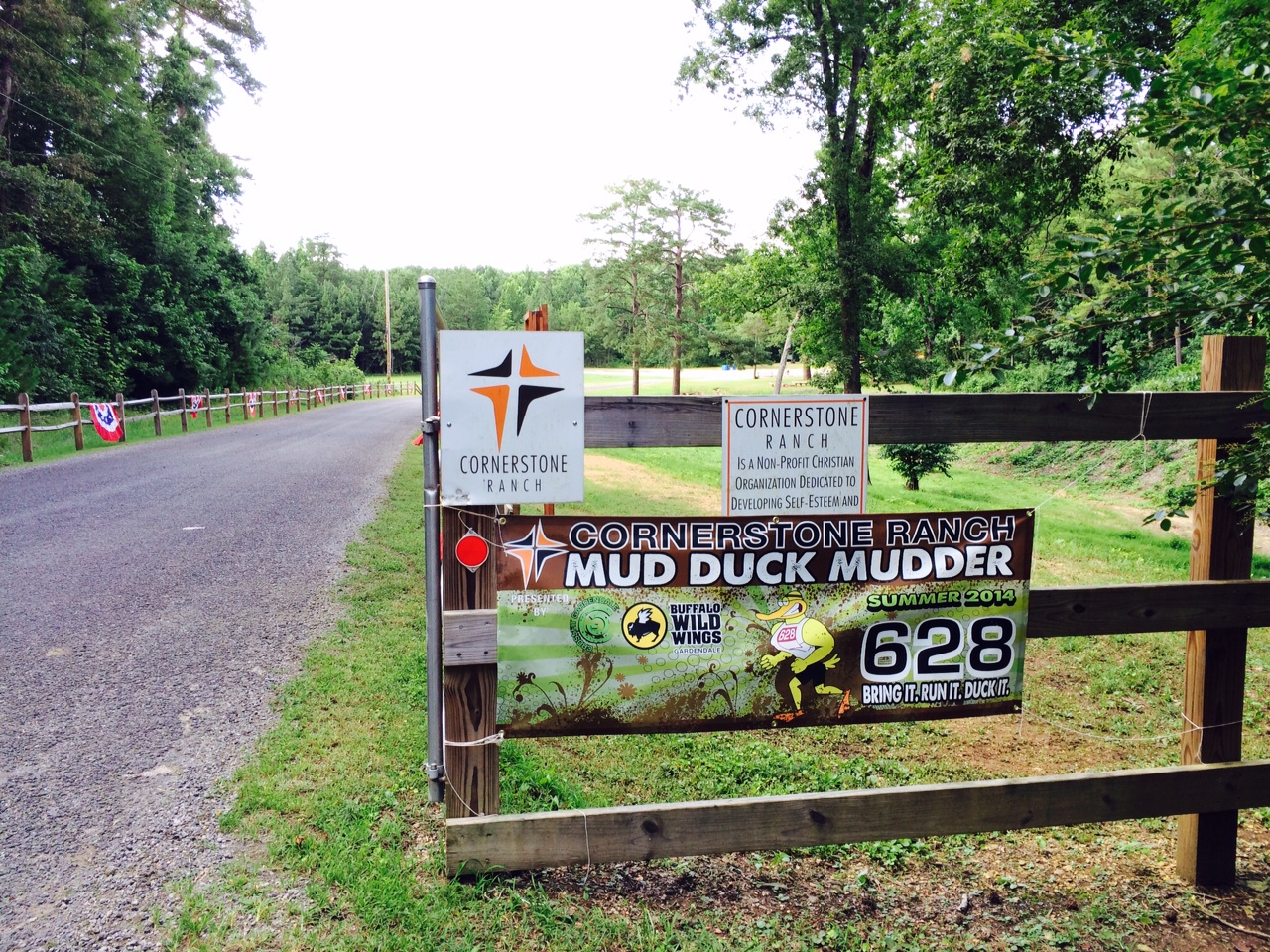 The tranquil grounds of the Cornerstone Ranch beckon you in, with picturesque fencing lining either side of the entrance. Once inside, parking was easy and plentiful (and Free!) with smiling volunteers directing us to park in the open grassy field. The first thing I noticed race-day morning was the participant crowd looked more “serious.” I saw a higher proportion of “cross-fitter, running club” type racers and fewer tutus milling around which gave me my first clue as to what kind of race this might be (in other words: Tough!)

The race course designer gathered us for a “pre-race” meeting and reminded us that proceeds raised from our entry fees & race course pictures for later purchase would be put directly toward furthering the mission and purpose of Cornerstone Ranch – (LOVE that!) After those feel-good announcements, the positive energy was incredible and I couldn’t wait to tackle that course and do my small part!

Natural Terrain and Then Some!

Mud Duck Mudder offered several race categories to choose from: a kid’s “Muddy Ducky” 1-mile fun run, a 5K competitive or non-competitive wave, as well as a 2-person sandbag team option. For those who signed up for the competitive heats there was prize money up for grabs. The fastest 2-person sandbag team, both Male & Female, would each win $350, and fastest Male & Female Individual winners would each take home a cash prize of $150. The men’s team sandbag division would run and finish together with their 20lb sandbag, while the women’s division did the same with a 14lb sandbag. (For those who were brave enough to take on the additional challenge of completing the course lugging a sandbag, I’ve got nothing but respect for you!) 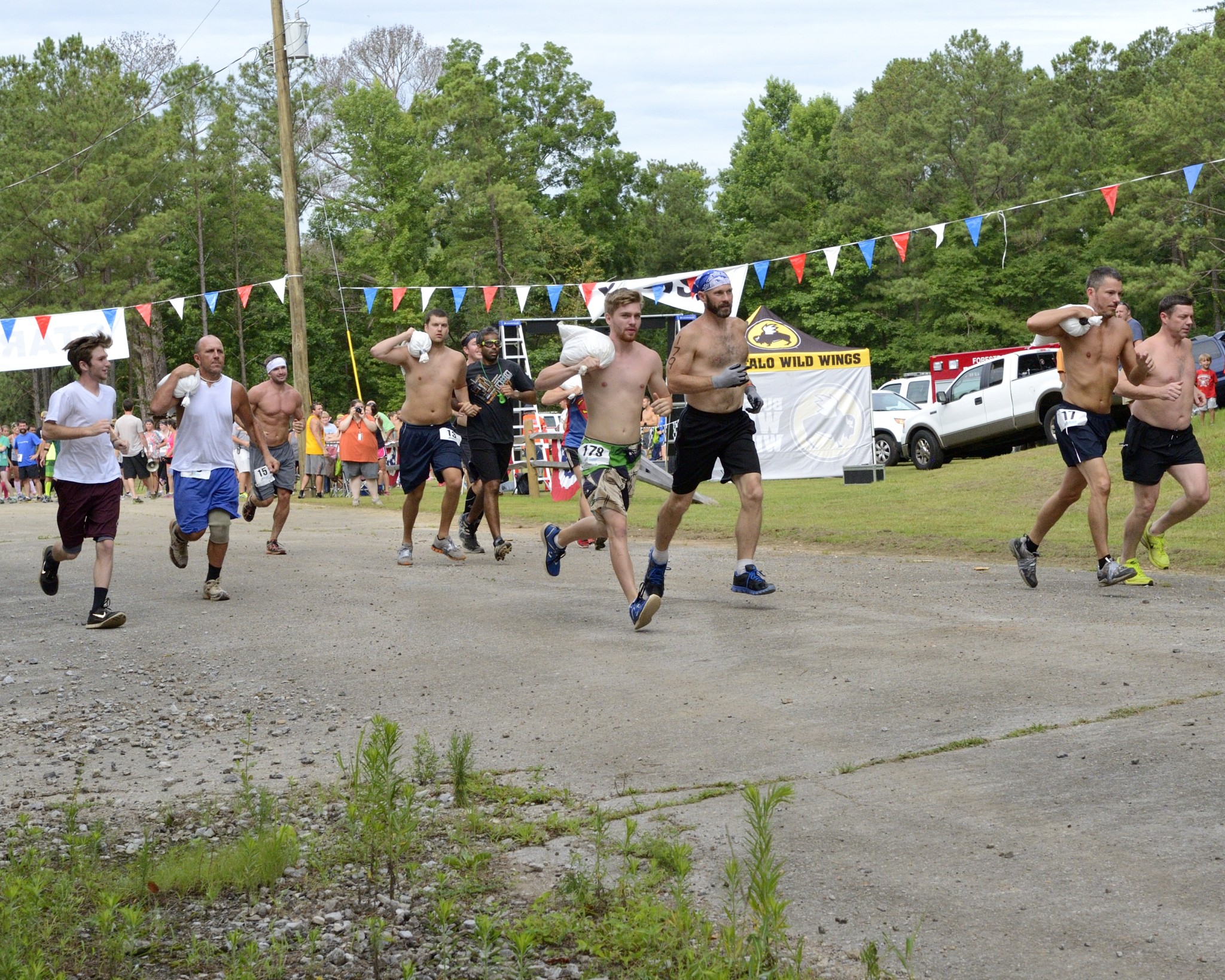 Of the many races I’ve done, it seems to me that each race offers a unique feature that defines them – their own “secret ingredient” shall we say. Mud Duck Mudder did an amazing job using the incredible natural terrain of Cornerstone Ranch’s vast acreage and more than delivered on their promise. To date, their course had the highest proportion and variety of water crossings I’ve encountered thus far, brutal hill climbs that left your quads and calves screaming, and swampy bog mud sections that sucked you in like quicksand! Within the first quarter mile of running, my initial impression of the toughness of the race was realized. We started off on a single-track trail that quickly dissolved into trickier navigating, from hopping over tree roots and fallen logs, scrambling up steep inclines to sliding down muddy slopes grabbing at a tree to help slow you down! For a large portion of the course, there were three of us pacing along together and we inadvertently became our own little tribe navigating the Mud Duck Mudder. No sooner would I get ahead of the two guys, they would pass me! We all traversed the knee-deep creek bed portion (one of many to come!) in something reminiscent of “The Three Musketeers.” Thanks fellas – I really enjoyed racing with you! 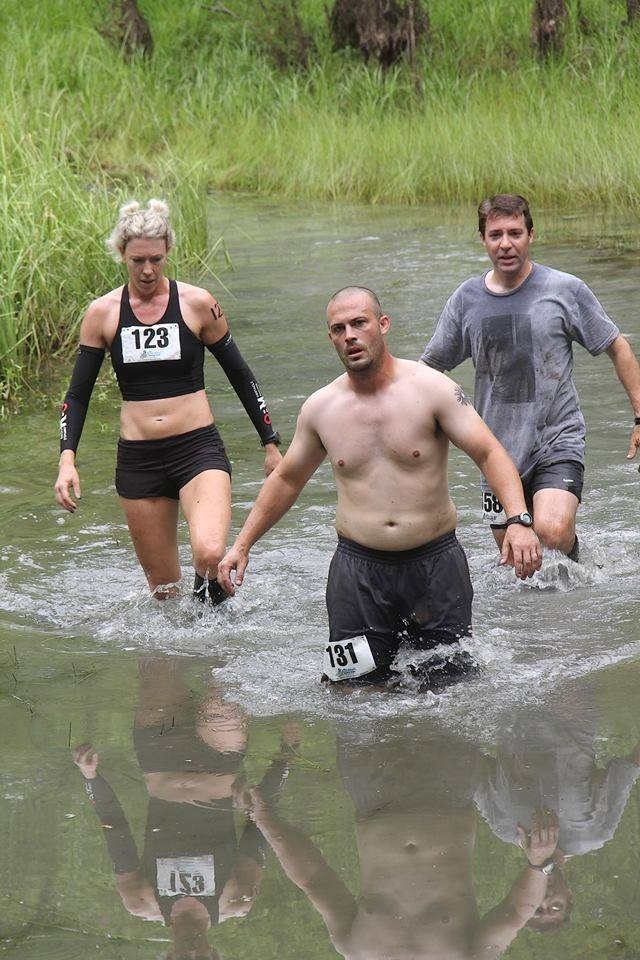 The names of some of the racecourse sections and obstacles are particularly worthy of mention. From the “Big Enchilada, Little Tijuana, Jake’s Rib Cage, and Tunnel of Love’” to my particular favorite, the “Honey Pot” I had no idea what I was in for! In this case, I think a picture is worth a thousands words (more pictures featured at the bottom of this review). 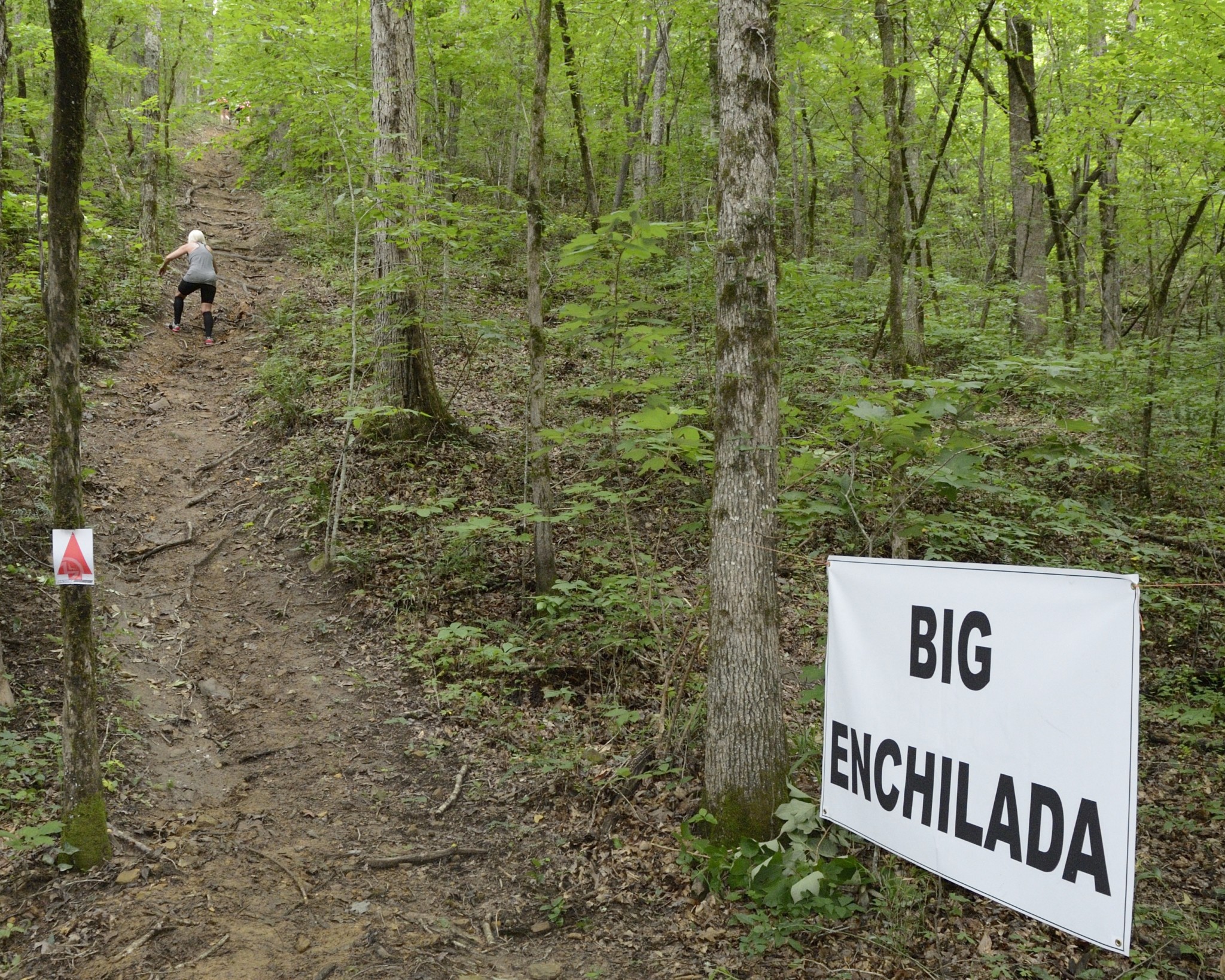 The Mud Duck Mudder was suggested to be around a 4-mile course in length. With such variety of land and water-crossings to draw from, it ended up coming in longer at just over 6 miles. Given some of the brilliant water sections which took us river wading at chest-deep lengths to slippery “whoops-a-daisy” river stone crossings, it seems to me that Mud Duck Mudder gave us more than our money’s worth of race course. And with the standout section called the “Honey Pot,” well, let’s just say, I’ve NEVER experienced anything quite like that! It was a portion of course that took you out into a thick muddy boggy swamp (complete with water skipper bugs & reeds) and suctioned you better than a Hoover vacuum. I’m a big fan of lacing up the shoes extra tight and triple knotting them for obstacle races…..but the Honey Pot tested my triple-knot in a whole new way! Not only that, the silty mud pulled you in like quicksand to the point that I just started laughing so hard as I lay there, chest-deep and horizontal in a swamp pit. It was so immobilizing I actually starting talking out loud and commenced negotiating with the bog. I remember saying, “Ok, I get it, you want to pull me in because you’re a new, improved version of supermud, but I think I have a good 2 miles of course left, and I kind of need my legs, and shoes back to finish it, so can you cut me a break here…?” To the full amusement of the wonderful spectators on the banks who witnessed my negotiation process, I did emerge victorious from the Honey Pot, fully coated in a thick sludge that I had to scrape off me like spackle! Some quick sips of water from the sweet volunteers who didn’t hold it against me that I probably looked and smelled worse than “Swamp Thing,” and I was off to finish out the rest of that course! 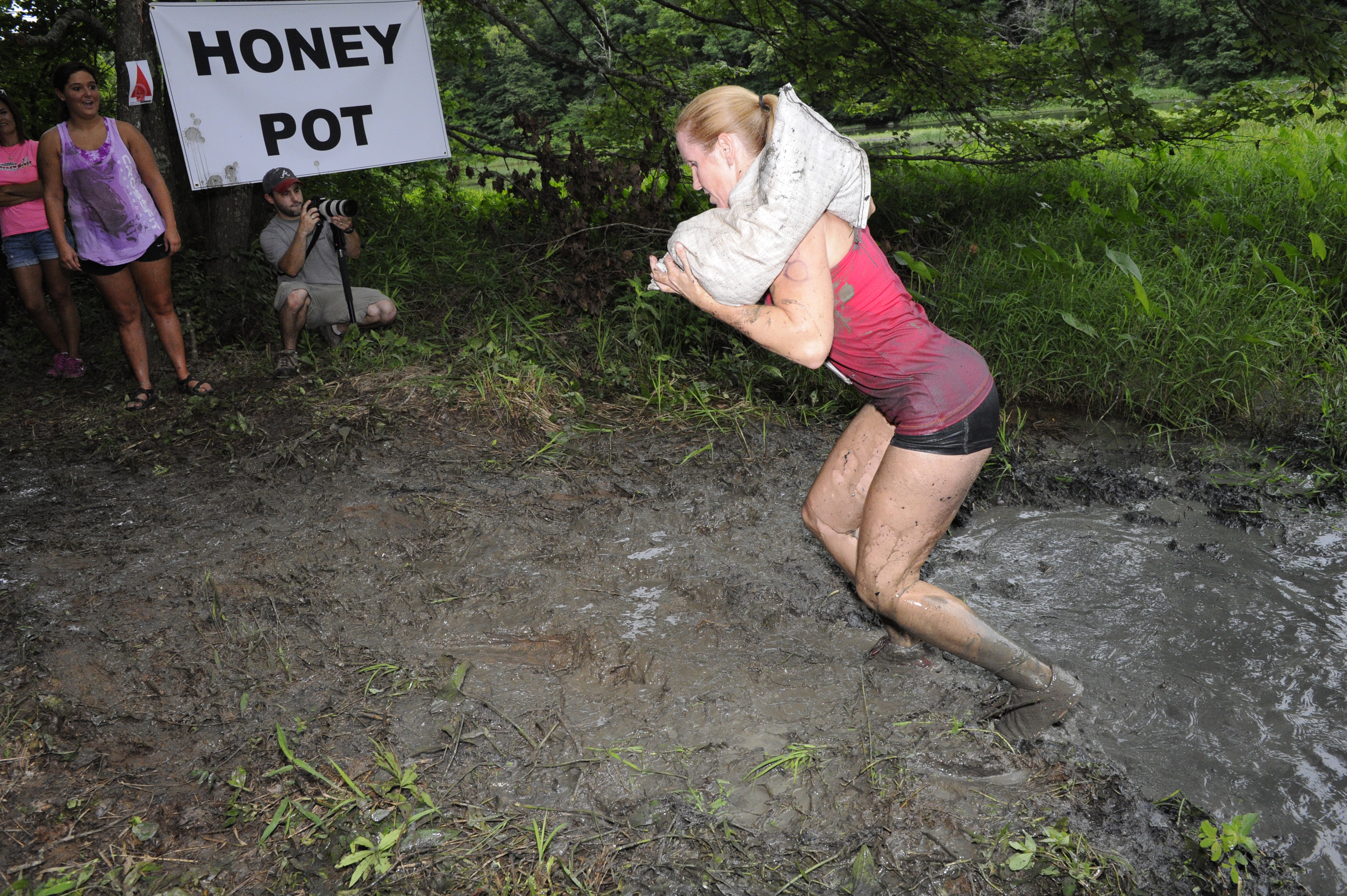 Around mile 5, I was running along an open stretch of ATV track and pulled off my best hurdle move of the day and leaped over an armadillo that was just hanging out in the middle of the trail. So Mud Duck Mudder, you can also advertise for your next race that the course includes not just natural terrain and man-made obstacles, but also armadillo crossings!

Seeing the big white FINISH sign hanging overhead in the distance was a welcome sight and I truly felt I had earned my First Place Female Individual placement on this tough course! Mud Duck Mudder did a fantastic job of putting on a challenging race that tested my racing skill sets. I learned new mud bog navigational techniques, perfected my “slip-on-mossy rocks” maneuvers and how to best leap over an armadillo without breaking pace! I can never thank you enough Mud Duck Mudder for these new talents I proudly add to my obstacle-racing repertoire.

Mud Duck Mudder did such a great job hosting their first obstacle race, they left little to recommend for their next race. Given that the course distance came in longer, they could benefit from adding additional water stations on the course as well as additional volunteers for overall monitoring and safety of race participants.   The race had fewer man-made obstacles than some other obstacle races offer, but the obstacles they made were well constructed and fun and the natural obstacles were so challenging it made little difference. The terrain itself quickly thinned runners right out of the start for both individual racers and sandbag teams so at their next race, they could use fewer staggered starts and set out more racers/wave if they so choose. This could get runners out on the course more quickly.

Mud Duck Mudder hosted a great race and from what I witnessed, there was nothing but smiling faces crossing the finish line, from more-experienced racing participants to the first-time racers alike. Mud Duck Mudder did a great job planning for this new race launch and it was obvious they had done their homework. There was huge presence from local community businesses in the festival area, with plentiful vendor booths and food options on-site. They offered an awesome hose-off section for their muddy racers (big fan of the rinse-off area!), free bag check, free parking, as well as their fun “best decorated rubber ducky” award. The post-race awards ceremony was held nearby at the Buffalo Wild Wings, one of the local business sponsors of the race. Winners were presented big checks to hold proudly for their “photo op.” With so much land to utilize and the growing popularity of their race, it will be exciting to see what new directions the Mud Duck Mudder take for their next race!

*Photos By: Obstacle Racing Media kindly thanks Larry Mayo, of LarryMayo.com and Kim DeLoach of krdphotos.photoreflect.com for their photographs used in this review. All proceeds generated from sale of their race pictures benefit the Cornerstone Ranch and are still available for purchase. 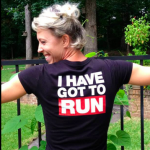 Shenoa Creer, a.k.a. ‘The Wolf’, is an avid OCR enthusiast who embraces all things deemed   challenging. When not representing ORM out on the race course, she might be seen running with one of her beloved weimaraners. Shenoa moves to her own cadence which coined her nickname. She loves the spirit and community uniquely found within obstacle course racing. 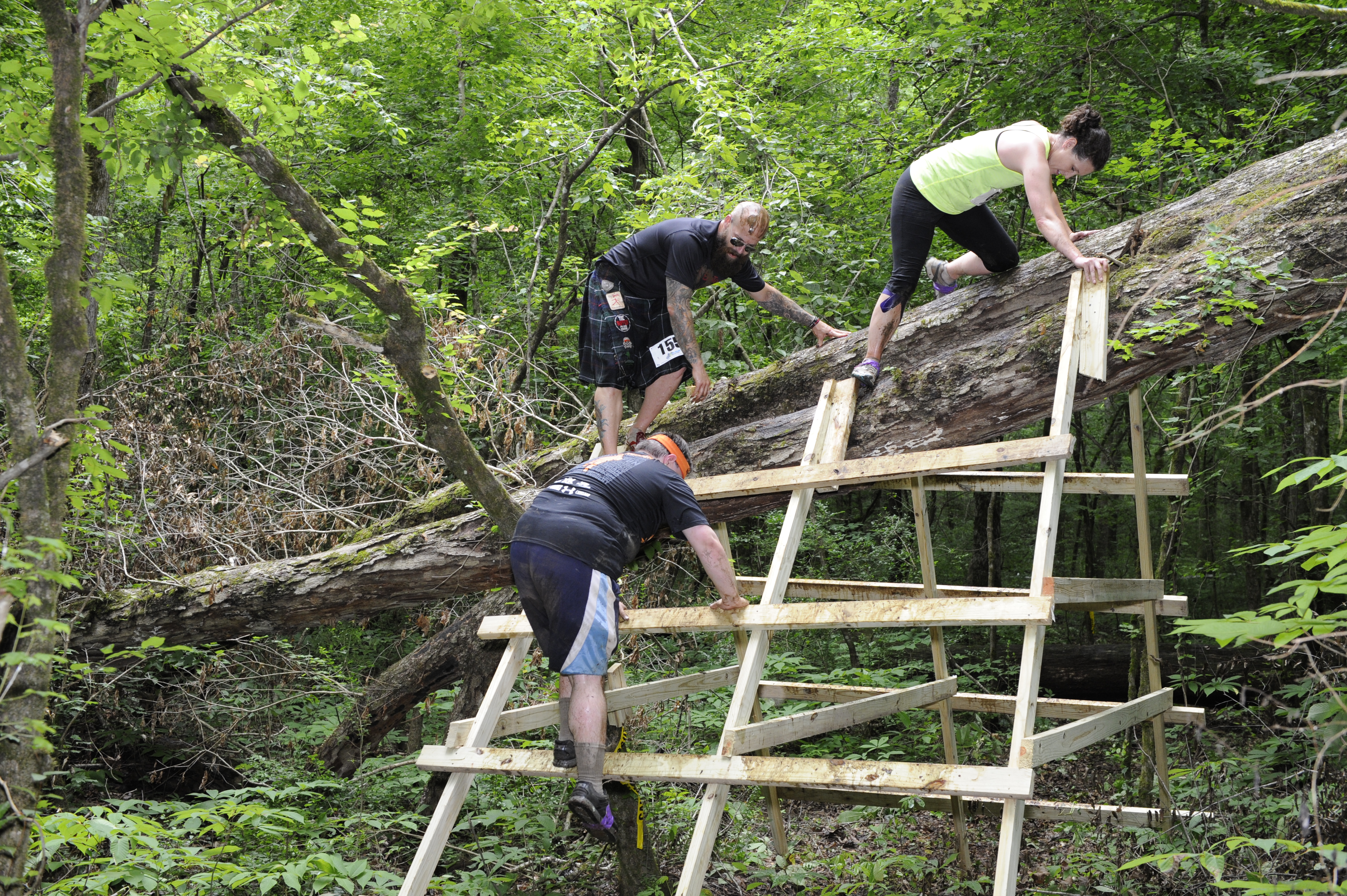 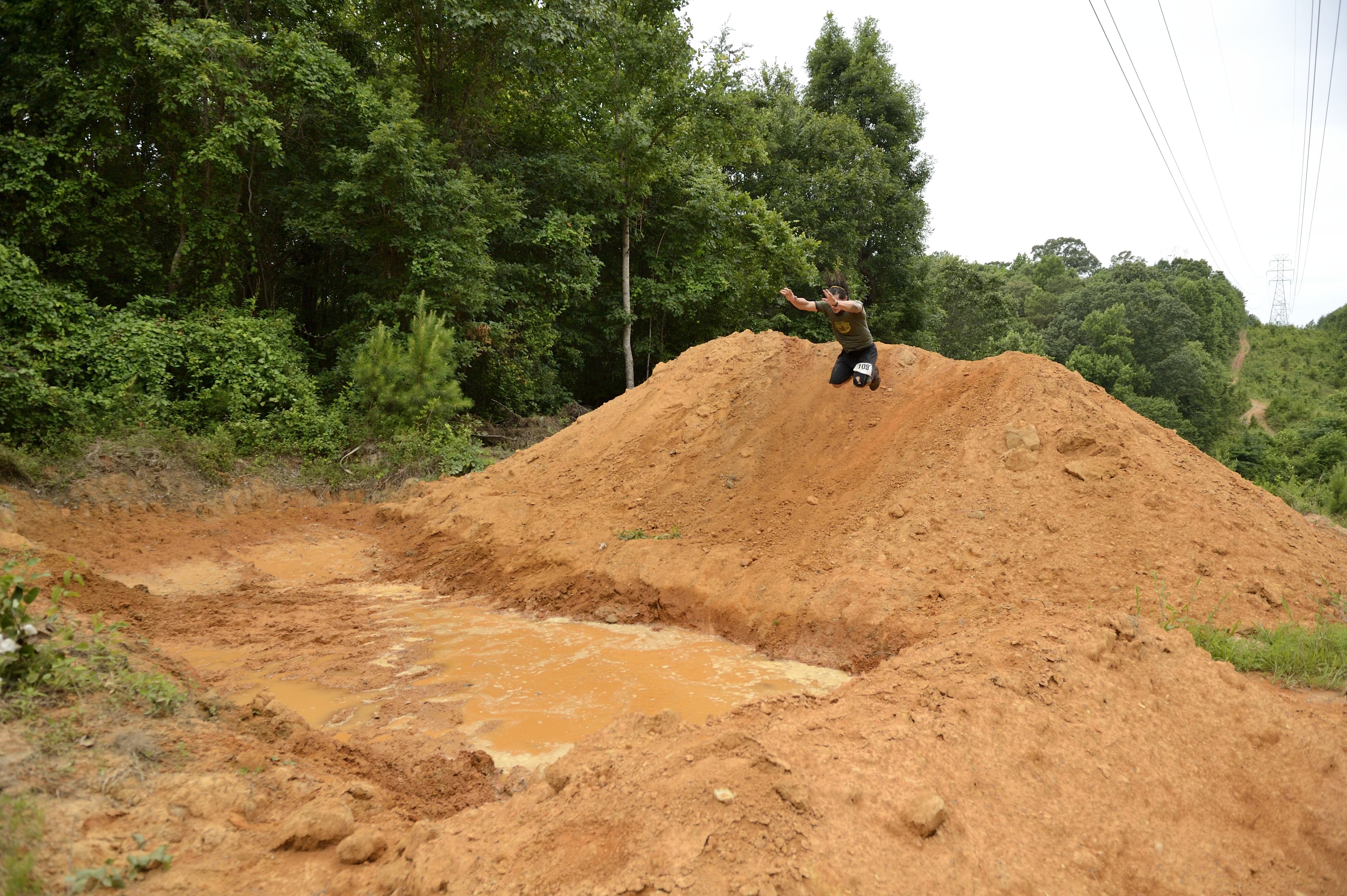 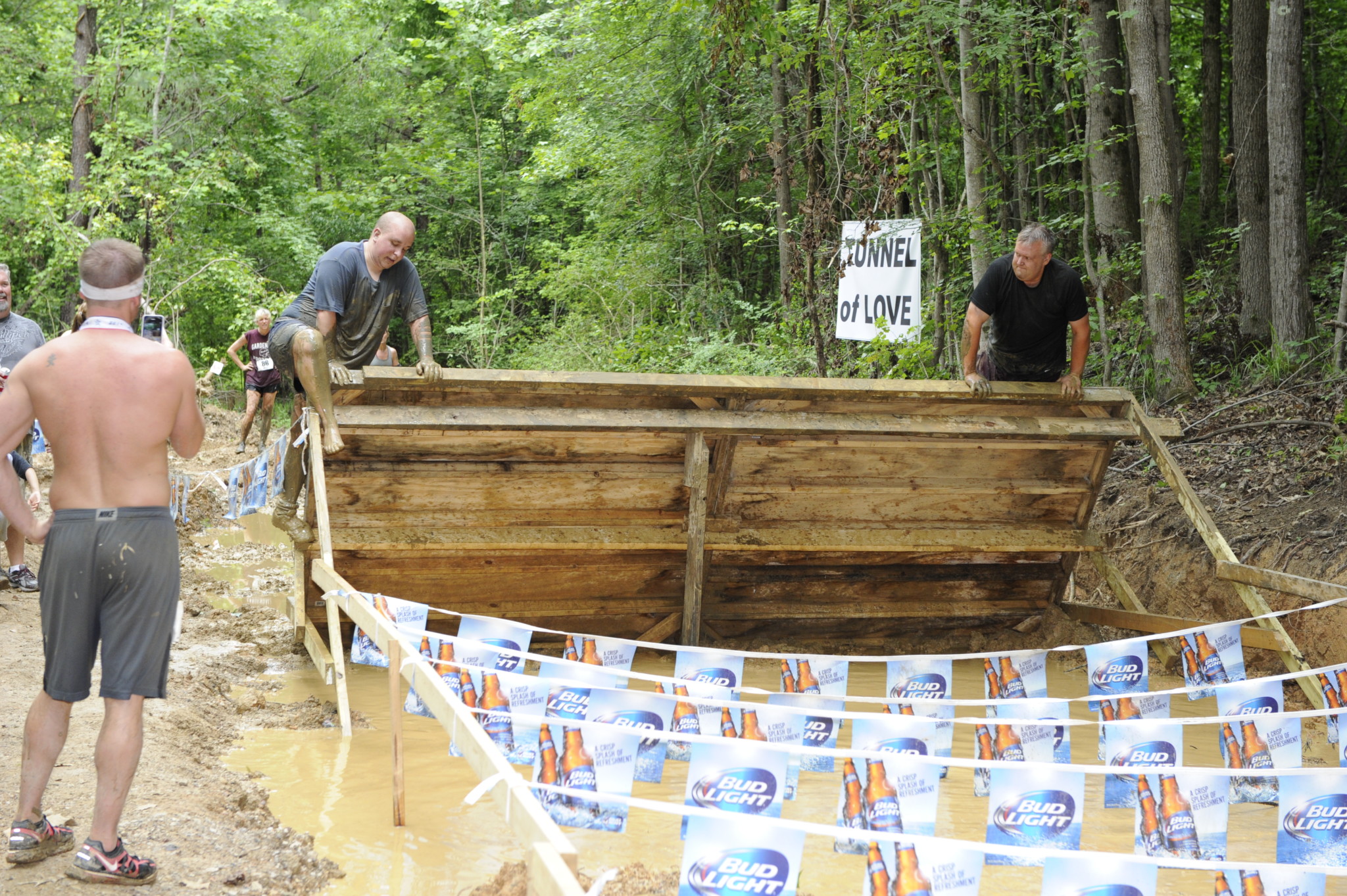 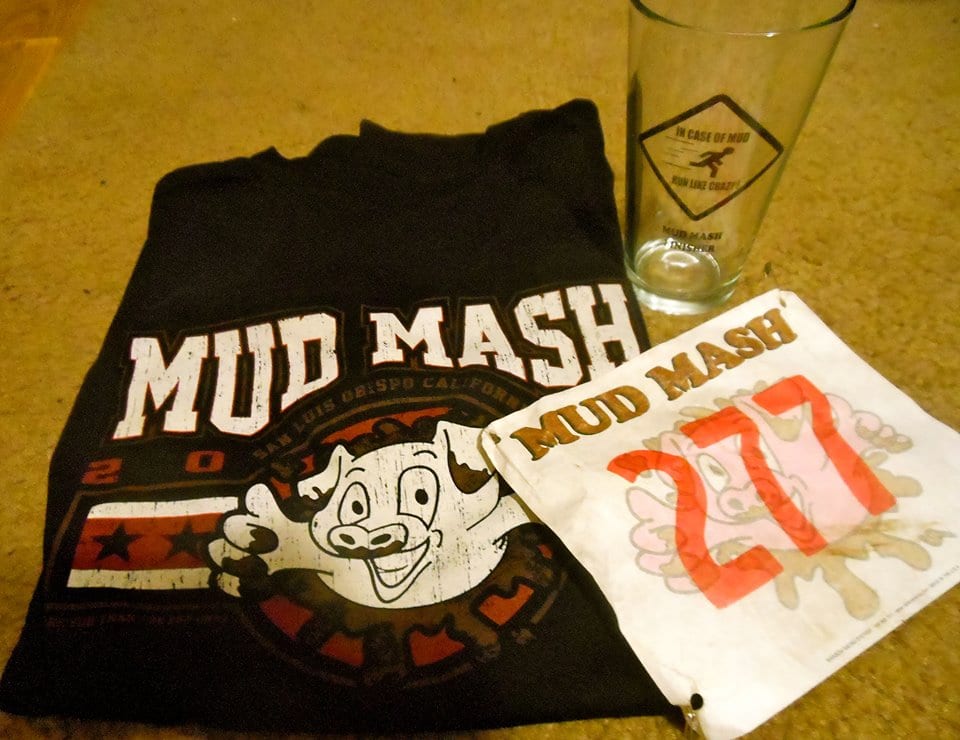 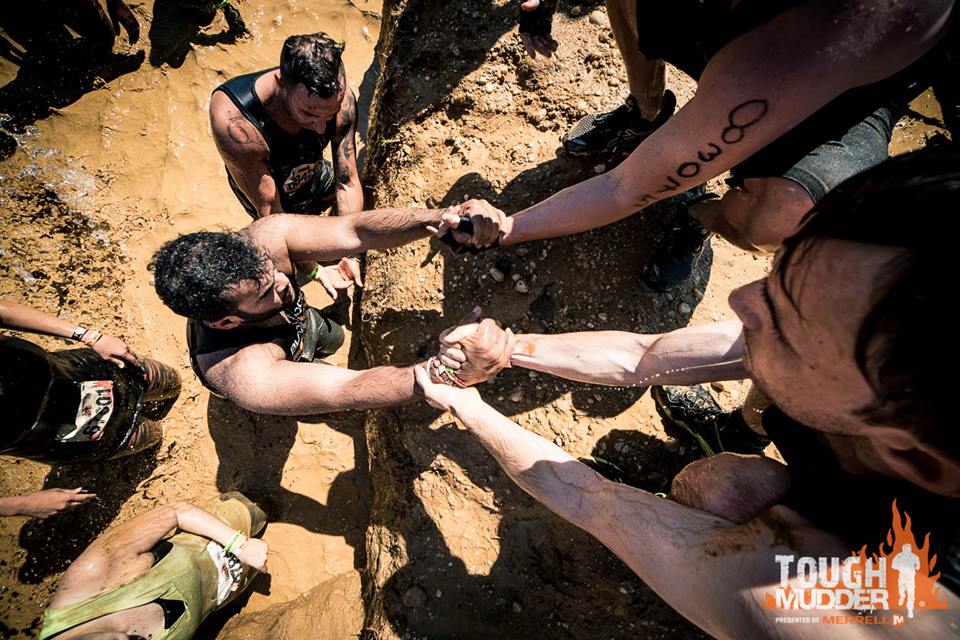 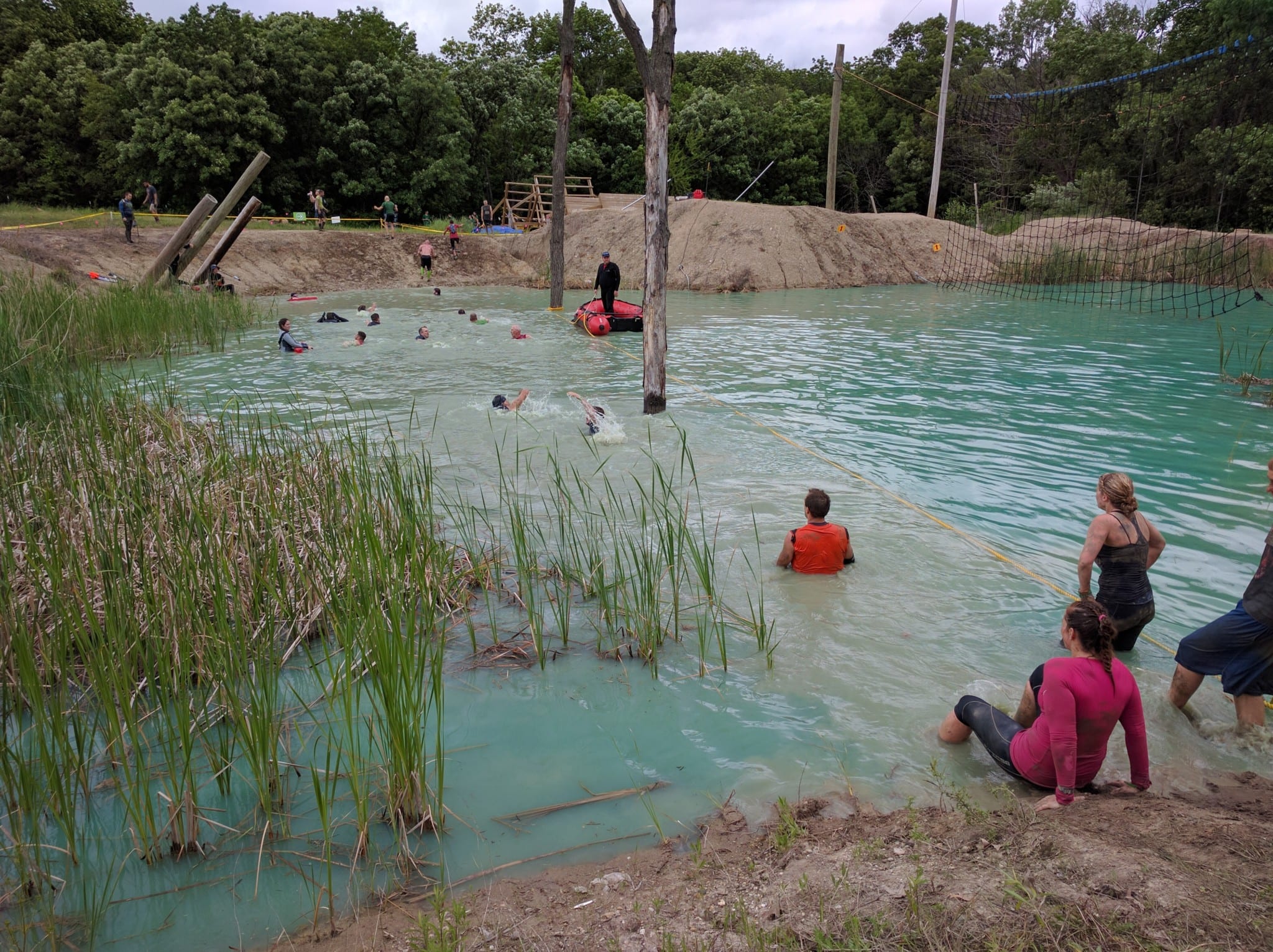