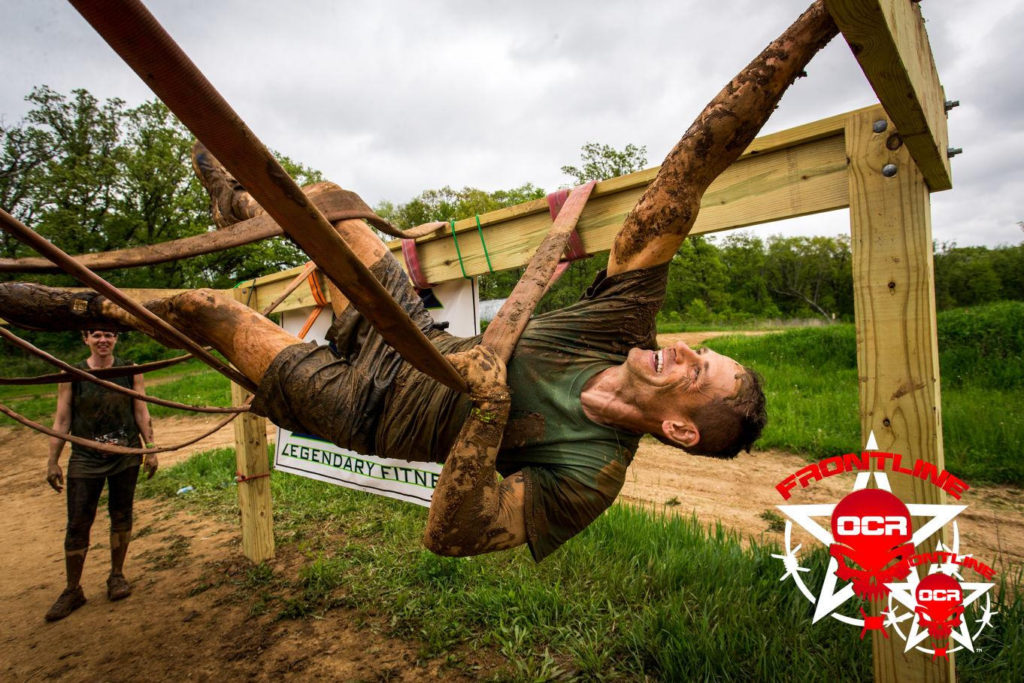 The 2nd iteration of Frontline OCR took place on the damp hills of the Byron Motorsports Park, in Byron Illinois.  The night before had brought rain and there were a few small showers which cleared just before the first wave started, making for some excellent muddy racing conditions.

A different kind of race 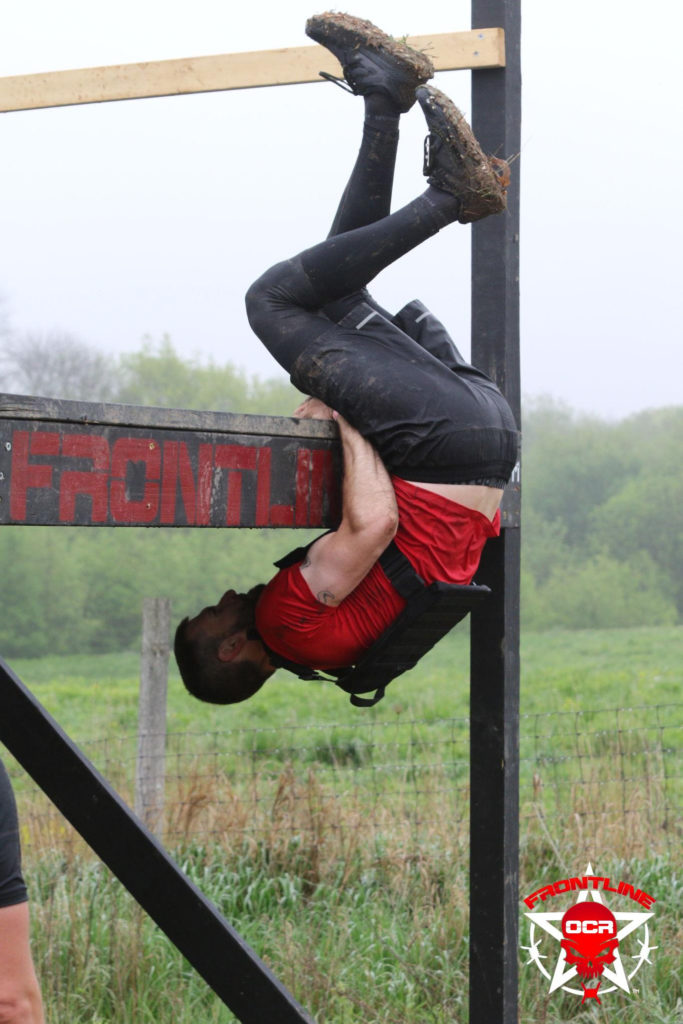 Frontline OCR is a unique event with two competitive race types, an open class, and a special wave just for first responders and military personnel.  The first competitive wave of athletes vying for a spot on the podium and prize money all had to wear a 15 pound weighted vest, in simulation of the body armor and gear that first responders and military personnel must wear and carry when performing their duties.  In addition the obstacles were mandatory completion, you could try as many times as you wanted but if you give up you give up your vest and must complete Twenty Two 9-1-1’s (the Frontline’s version of a burpee) for each obstacle failure.  If you managed to complete the course with your vest you got to keep it, an amazing value.  Not many people were able to complete the entire course with the vest though.  Only 3 of the 13 women who started the race were able to keep their vest. I’m not sure on the men but I would guess only half completed the race with their vest. 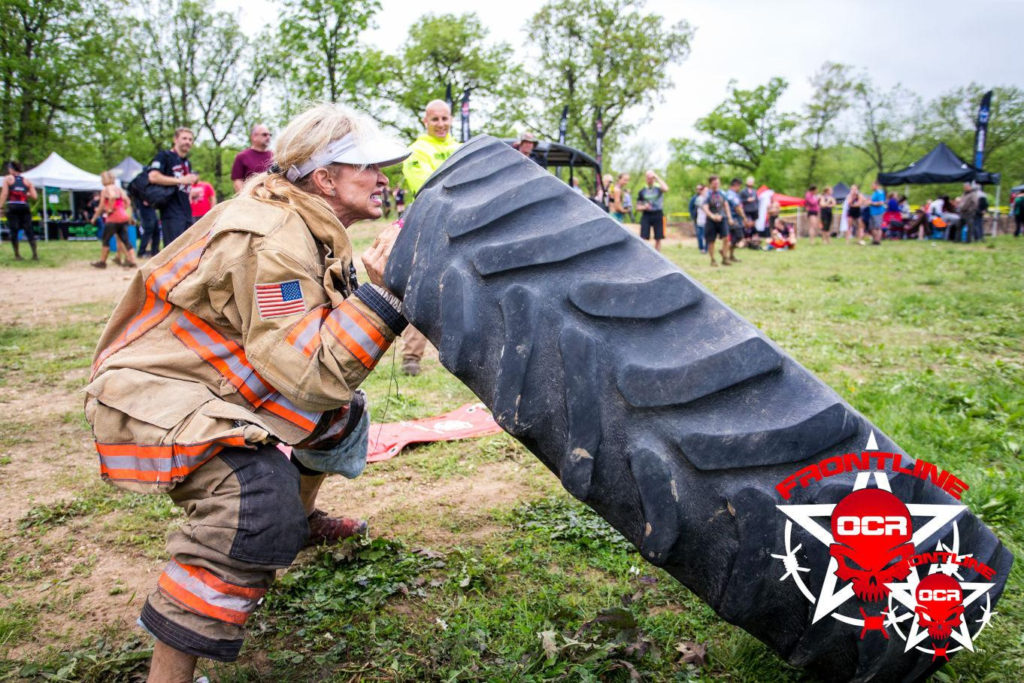 The top two male and female special forces finishers had to put on a firefighter’s suit and compete head to head in “The Blitzkrieg” a series of timed challenges to determine the overall winner.

The 2nd competitive wave was the endurance class – this is the wave I ran in.  This wave was unlimited laps of the 6 mile, 33 obstacle, course with mandatory obstacle completion. (Thank god we didn’t have to wear a weight vest.) There was a strict time limit though.  You had to FINISH your final lap by 2 PM or you would be disqualified.  That’s right, there wasn’t a cut off for when you could start your final lap just for when you had to finish which means you needed to be fast and be able to know if you could make one more lap in time without being DQ’d. 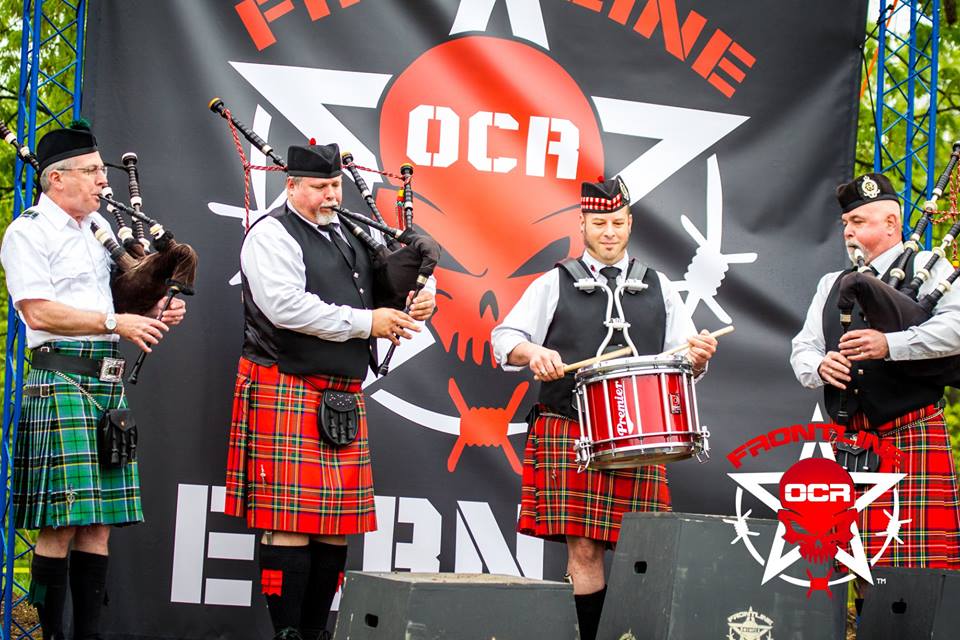 The course was set up at a small motorsports park meaning lots of dirt hills up and down.  It also meant there was a lot packed into a small space.  The small space allowed you to be able to hear all of Coach Pain’s starting line speeches and the music of the bagpipe color guard band which was playing at the festival area.  Running through the damp and slightly misty woods with the sounds of bagpipes in the background brought an ethereal warrior sense into my blood and helped to propel me over the obstacles. 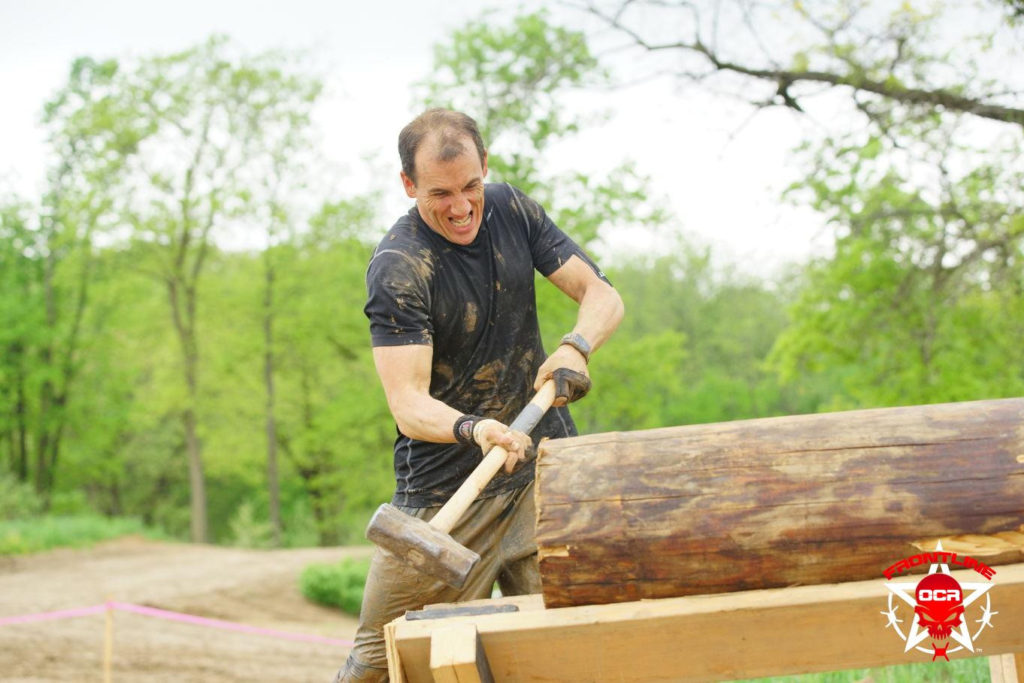 The obstacles were a wonderful mix of OCR classics. Multiple heavy carries from a bucket carry, tire drag, dragging an Atlas stone through mud and water, an ammo can carry over moguls, and finally, a sandbag carry made from old fire hoses.  There was plenty of mud, with mucky watery trenches, crossing through water which was neck deep at times and running through creek beds, some dry and some not so dry.

The best obstacles though were the big ones, and there were a few. What really made this possible and made this event unique and special was that multiple local OCR teams donated obstacles to the race.  Strong as Oak brought out a hang board setup called “A Bridge too far” which for the Special Forces lane consisted of traversing across ascending and descending ledges with gaps in-between using only your hands.  FlatLiners brought an obstacle called Thermopylae- which was an inverted version of Spartan’s Olympus obstacle.  There was a Monkey Bar rig with two parallel lanes, you had to go down one lane, transfer to a set of rings then swing yourself over and up to the parallel set of bars where you had to descend and keep from touching the ground before ascending back up to ring the bell. And of course, there was the Frontline signature 20 ft warped wall. 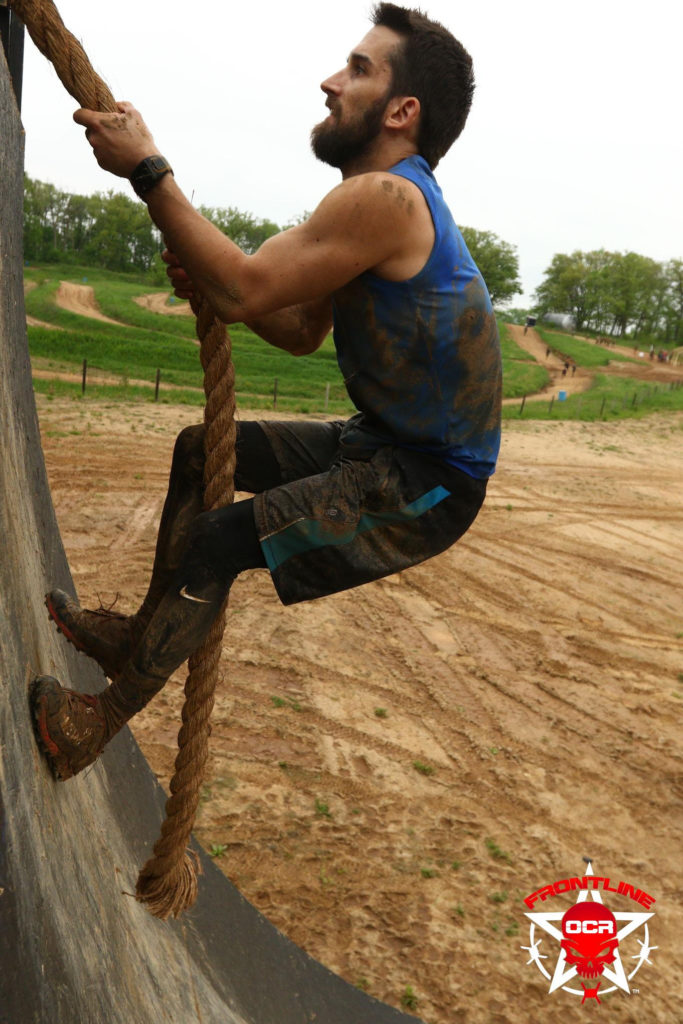 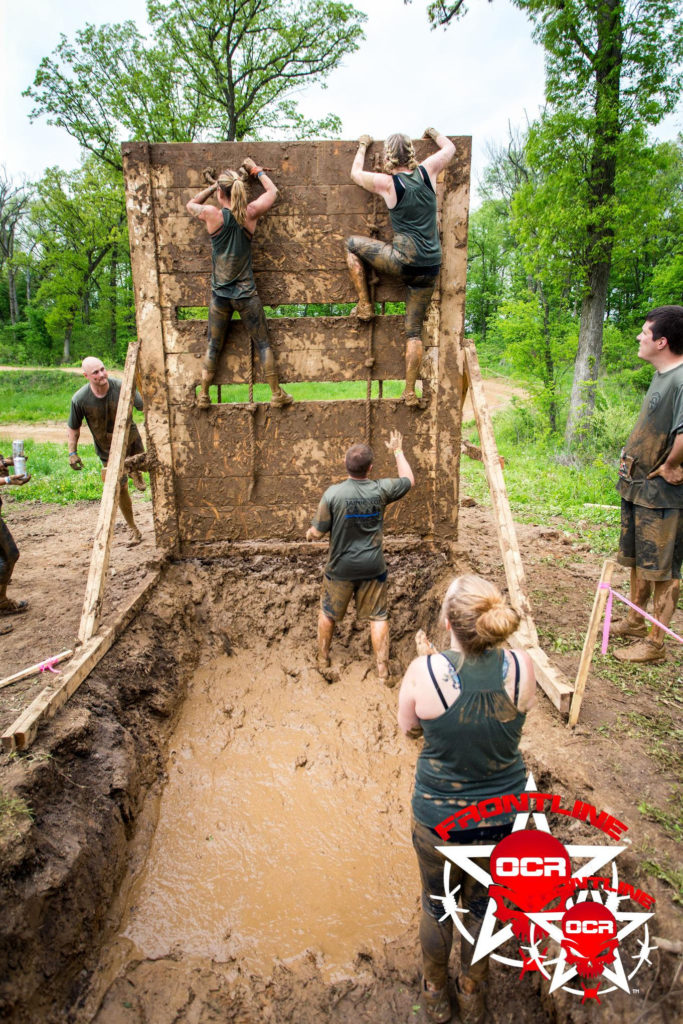 Some of the obstacles proved to be too hard and caused some large backups, so in true military style, the course workers adapted the obstacles.  The first major change happened at the mud pit wall, a 10 ft wall set up in a mud pit.  On my first lap, the rope was straight (and covered in mud) and few people in vests made it over so they knotted the rope.  On my second lap, they had removed 2 boards from the wall so you could get a foothold.  When I had made it back to the monkey bar rig on my 2nd lap there was still a line of Special Forces competitors not willing to give up their vests, trying their best to make it across the setup which had been reduced to one lane and a transfer to the 2nd set to ring the bell. 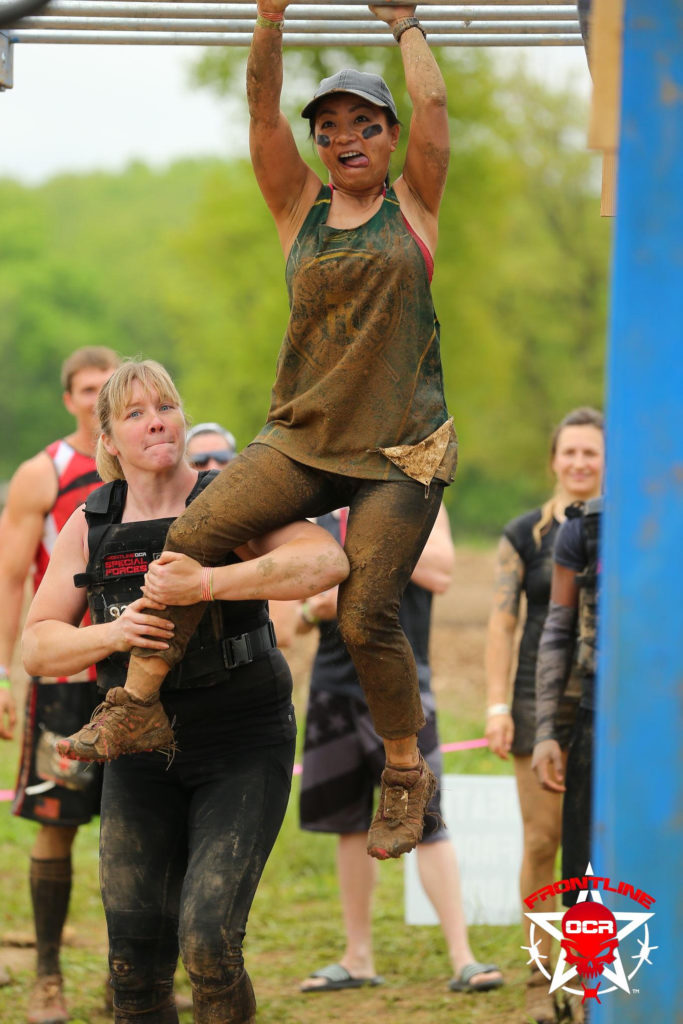 After completing my 2nd lap my heart wanted to continue but my Achilles tendon did not.  There were other athletes who came in behind me who wanted to try for a third lap but knew they wouldn’t make the 2 pm cut off so they called it a day and kept their band.  From talking with my fellow competitors it seemed that they would have liked a last lap start time cut off more than finish time cut off.  One runner who shall remain nameless had already lost his band (on his first lap) and was already disqualified but told not to start a 3rd lap, which he was not happy about, even though the final wave hadn’t left yet and he was already DQ’d. 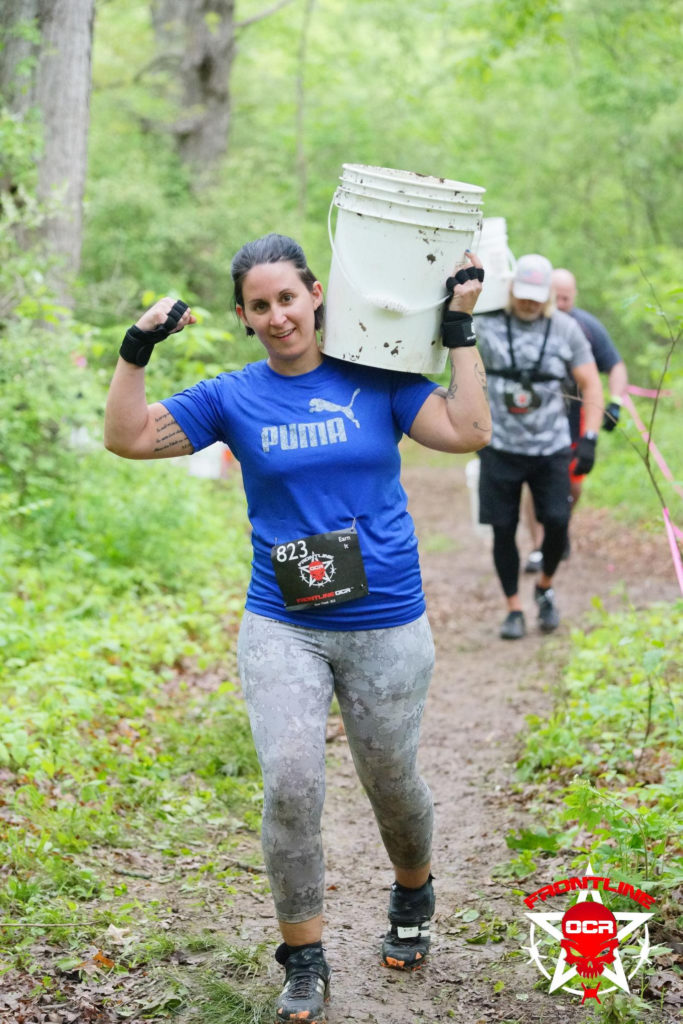 A mix of “Local” feel with “Big Time” quality

Frontline is a small company bolstered by Ed Leon’s love of OCR and the Midwest OCR community.  Being that this is only the 2nd race they were hit by some of the pitfalls of a small local race.  There were very few volunteers but this didn’t bother me as I know how to pour water into a cup and most of the unmanned obstacles were very self-explanatory.  The problems came with only having one or two lanes at obstacles.  Some of the harder obstacles had backups from the Special Forces wave with nobody wanting to give up their vest or band.

As this race grows, which I’m sure it will, I expect more lanes on obstacles will be added.  The only other negative small-time race problem that happened was a lack of showers/hoses, there were only 2 which made for super long wait times (I ended up just opting to stay dirty). What it lacked with “local” race problems it made up for with local race charm.  After you were done racing you could get a toasted coconut porter or any number of other local craft beers from Hairy Cow Brewery. They were also serving up real BBQ and sampling locally roasted coffee.  They even had some tasty vegetarian options for food.

In conclusion, I had a great time.  Tons of variety in obstacles, great atmosphere, great terrain.  The people who put on this event are passionate about OCR and continuing to improve.  I wouldn’t hesitate to do it again or recommend it to anyone.  Totally awesome race!

All Photos courtesy of Conquest Photos

Earlier this summer, I saw a video that Tough Mudder posted of a very special competitor who took on… 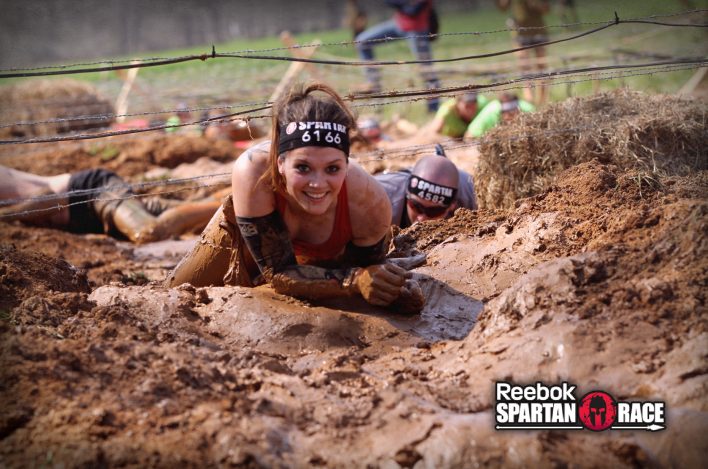 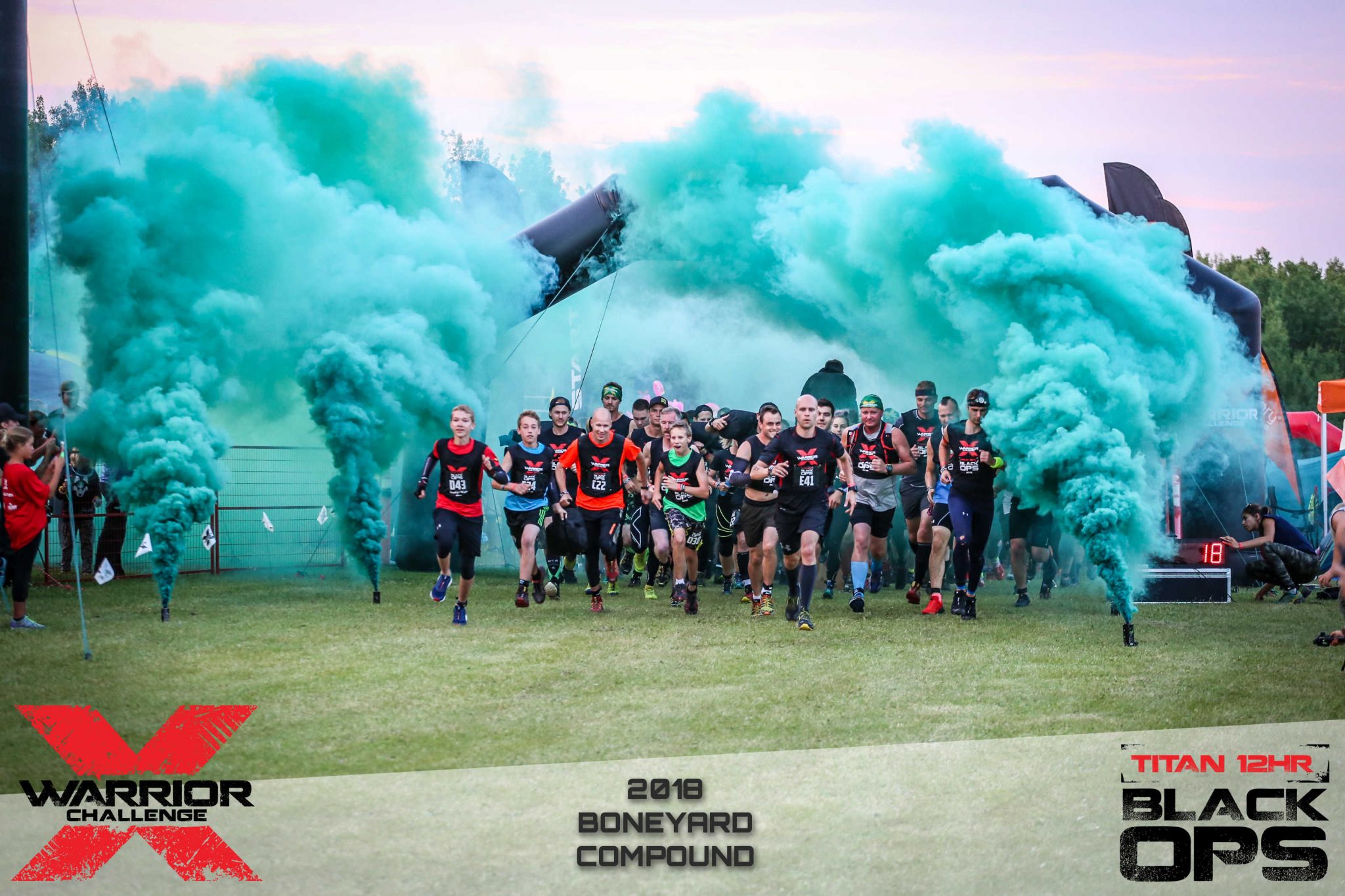