In the beginning of 2013, Hobie Call famously left Spartan Race and began work on a new race called Extreme Nation which was to launch in Michigan. Hobie promised an obstacle heavy, “short course” as opposed to the longer “running heavy” courses we are used to. Shortly thereafter there was a public crash with management publicly fighting, and family tragedy. A few months later, the brand was reborn, a new date and a venue in Zephyrhills, Florida was announced for February 2014. Yesterday, that event happened.

What Extreme Nation Got Right

Pre Race Instructions Before The Race.

There was an 8am mandatory meeting for all teams where the rules were gone over. Spartan and Superhero typically do this at the actual start line of the elite waves. Not all the participants can hear or are even paying attention because they are too focused on the race at that point. Doing it an hour in advance is a much better way to do this. It gave everyone time to get their questions answered prior to the start line. 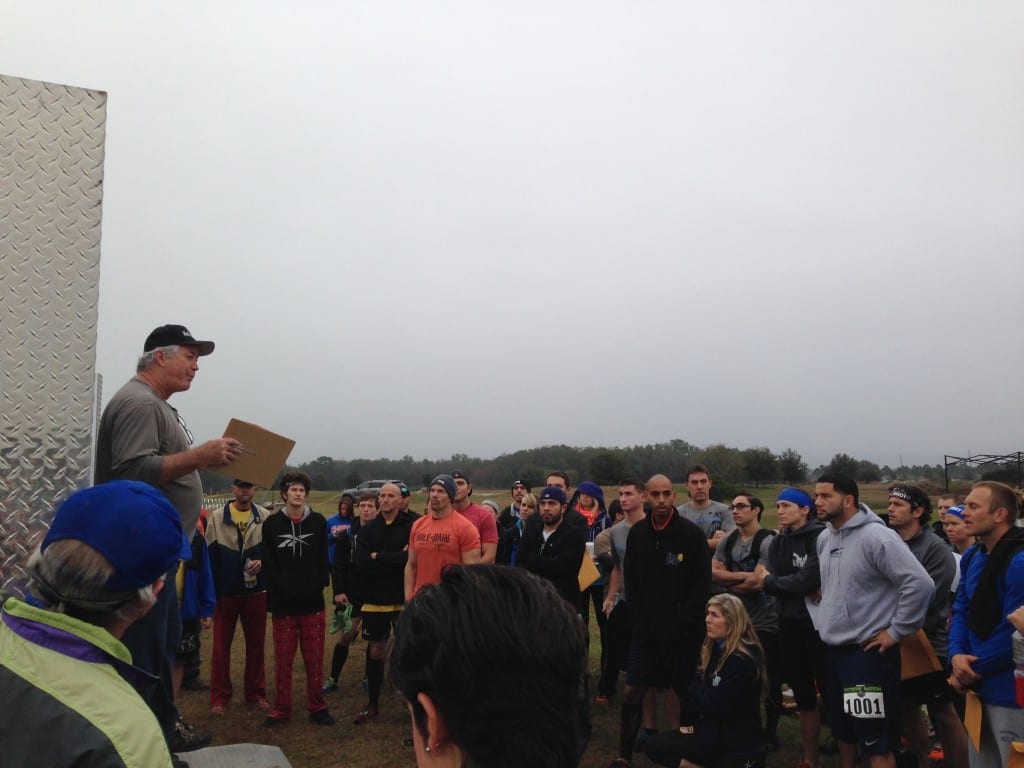 The course itself was about 1.5 miles. Once the race started, spectators could use “lanes” to follow the racers. If you wanted to get a closer look at a particular obstacle, you could walk down and get near that obstacle without interfering. The setup made it so that spectators could watch several obstacles at at once up close. Then, move only a few feet over, and see several more obstacles. Extreme Nation absolutely delivered on “Spectator Friendly” 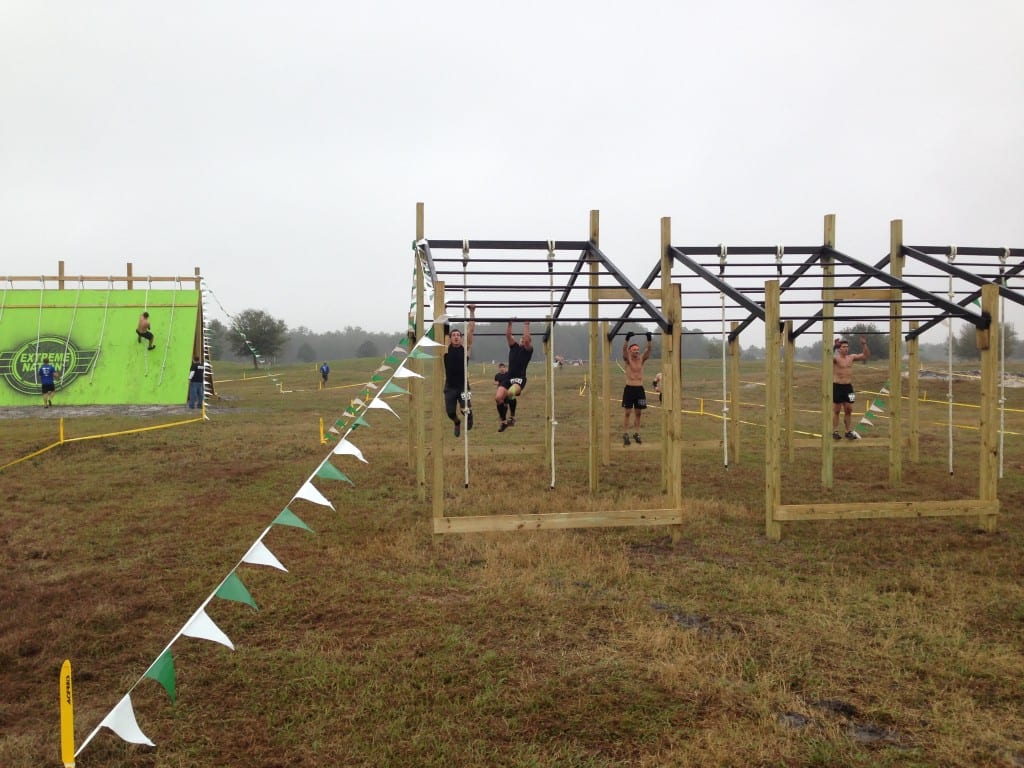 An invitation to ask for time corrections.

The monkey bar/rope/monkey bars was an awesome twist on the standard monkey bars. Also, the sandbag carry was turned into a new challenge by not allowing males to carry the sandbags on their shoulders. You must “carry” using hands only.

Hobie Call was there and as always, talked to everyone who approached him, answered questions, and took pictures. Our first superstar helped put OCR on the map and everyone still loves him. In ORM’s opinion, there will truly never be another Hobie Call.

Being Open to Suggestion

It didn’t take long for participants to see that the monkey bar incline/swinging rope/monkey bar decline was very difficult for most of the women. From a physical standpoint, most women could just not do it as the bars were too far apart. Rather than declaring “we aren’t wrong”, which is the attitude that sometimes comes with such criticism, EN immediately instituted a change. Women would have to attempt the “regular way”. Then, if they failed, they would then attempt from the middle rope. If they failed again, there would be a 20 burpee penalty.

Paying down to 6 places

It’s no fun showing up when you already know who the winners will be. Paying a field that deep, gives hope where there was not previously. Standing on the start line, and looking over at teams led by a Hunter McIntyre or a Karlee Whipple can be intimidating. However, knowing that any given team could take some of the other places, makes the race much more exciting for the racers and the spectators.

Most in the OCR community know that this can be make or break for any event. From parking, to registration, to on course, all staff and volunteers were awesome. They gave everyone a “What can we do to make your day better” kind of attitude.

Extreme Nation promised $40,000 in payouts and came through on that. All money winners, left with a check that day. 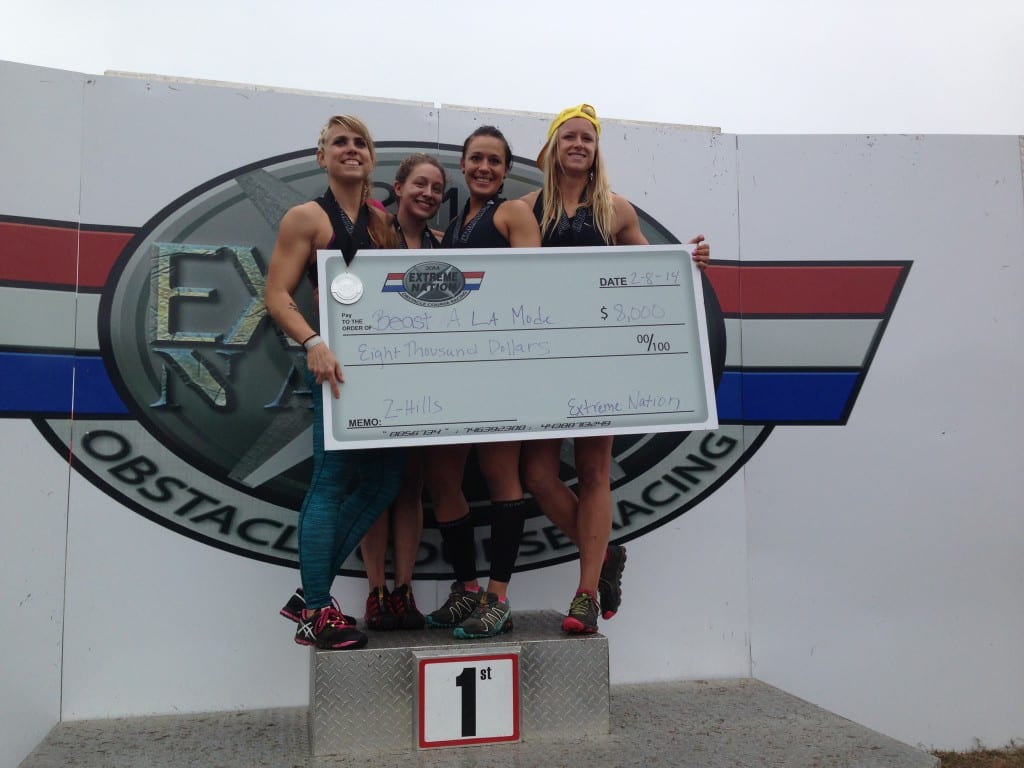 What Needs To Be Improved

Where are the pictures?

There were few if any official race photographers. As of this writing, there is no link to pictures or a promise to post any. Even the EN Facebook page only has a few photos up from yesterday. Elite obstacle racers and the everyday mud runner both love to see photos after the race.

Where is the food?

The only “food” on site was a stand, not unlike at a high school football game, with less selection. Choices were candy, chips, soda, or a hot dog that had been sitting in a crockpot all morning.

Where is the mud?

A staple of any outdoor obstacle course is mud. There was no time on this course that shoes got wet or muddy. Some races have what we call “mud for mud’s sake” with some ridiculous mud crawl at the end. That’s not needed either, but this course had zero water or mud on the course

Where are the officials?

This is a big one. There were really only two obstacles that needed to be heavily officiated. One of them was the monkey bars. For the women’s prelims and finals, many women were doing burpee penalties. We saw one official, standing on the opposite side of the obstacle, talking to spectators, while women did burpees on the other side of the obstacle. We asked if he was watching/counting, he said “yes”.

We didn’t think this was acceptable. There needed to be multiple people at this obstacle counting out loud, making sure chest hit the ground, etc. Other obstacles that required one volunteer had several volunteers so the bodies were there. The focus and training of this position needs to be top priority if Extreme Nation wants to be taken seriously.

An additional question would be “Would the average mud runner, enjoy this course?” ORM found the distance a bit short. The course was between 1.4 and 1.8 miles long and had between 18 and 20 obstacles. If it took an “average” person 30-40 minutes to complete, would they feel they got their money’s worth? Possibly? A way to correct that would be to allow for multiple laps or perhaps an extension of the course that would be optional for the non-elite waves.

Overall, every one we talked to loved the course, loved the format, and had a great time. We guessed there were approximately 200 people at this event. It made for a great time since everyone knew each other or had to chance to meet new people. This also made for great camaraderie as we witnessed an overall cheering for all participants, not just one particular person or team.

That small of a crowd is not going to make a race any money though. Extreme Nation was true to their word and provided a great , spectator friendly event with top payouts on the same day. They won’t stay in business though if they can’t find a way to market the race better and get a larger attendance,

A podcast will be up in a few days with additional interviews from participants and the race directors. In the meantime, Arnel Banawa, created an awesome video. You can see many of the obstacles, and hear what people thought. Check it out here.

Some additional photos can be found on our Facebook Page, using this link.

All In - An Update on Superhero Scramble 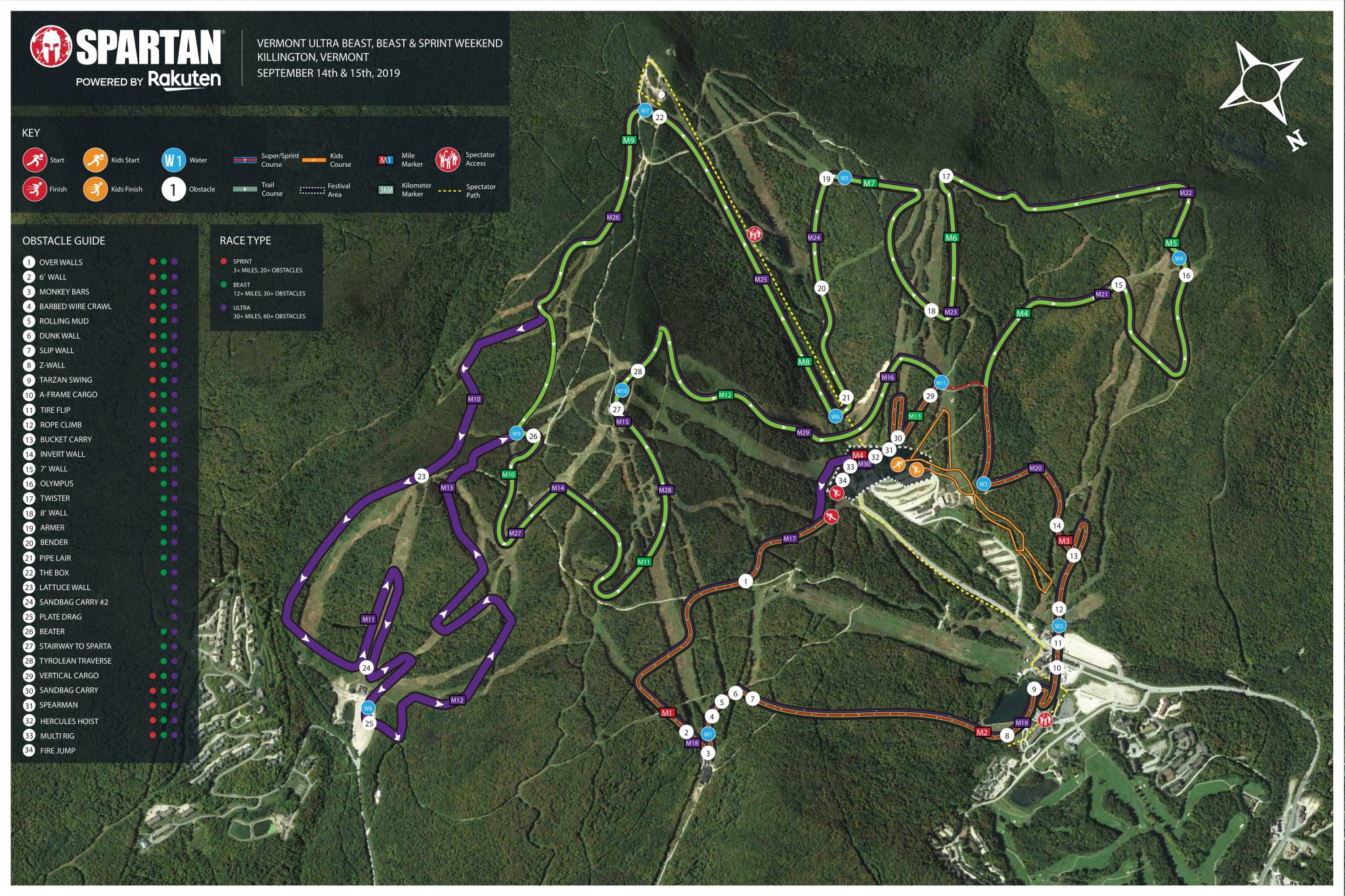 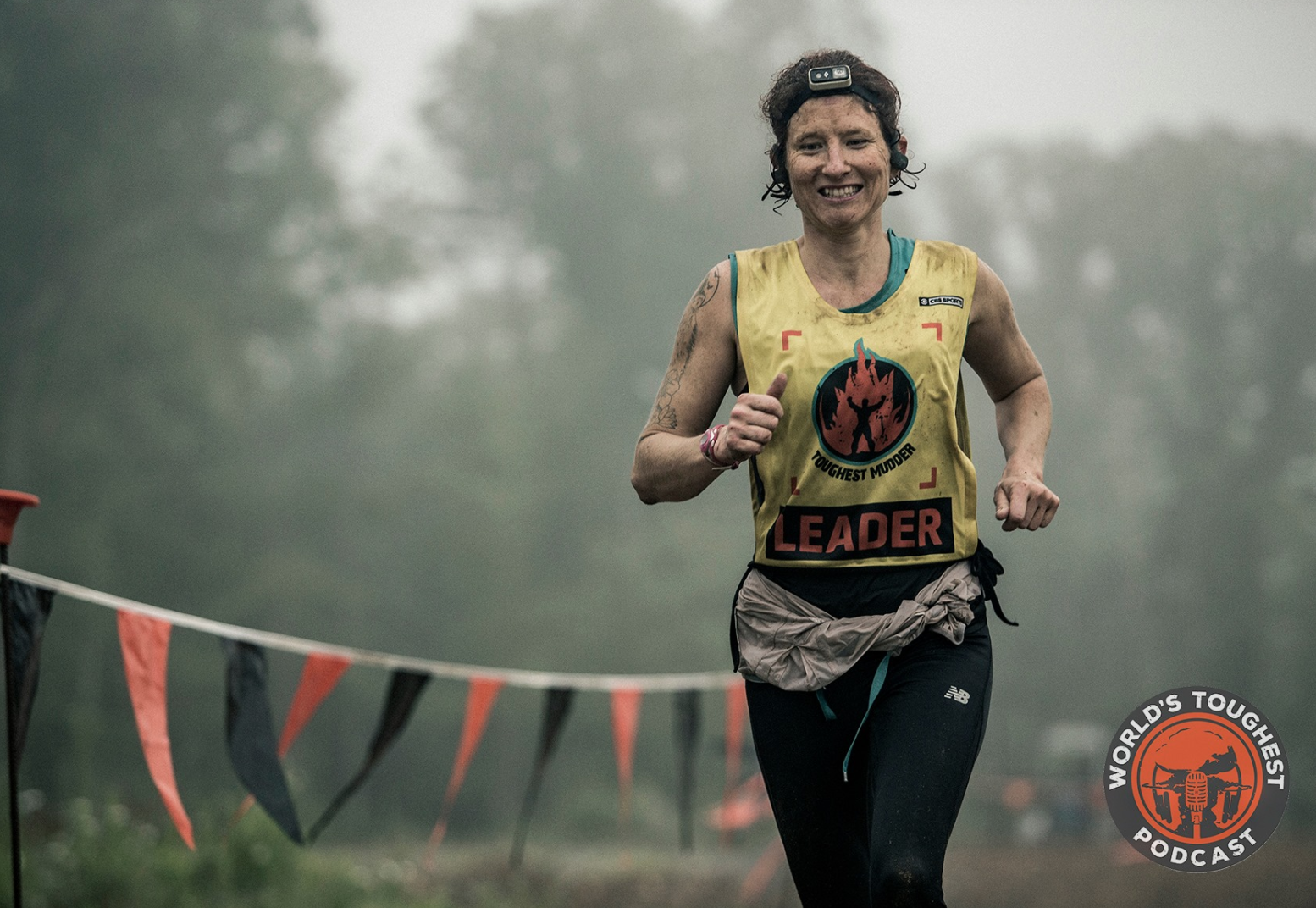 With the Canadian super duo of Ryan and Lindsay taking this one off, there were at least 2… 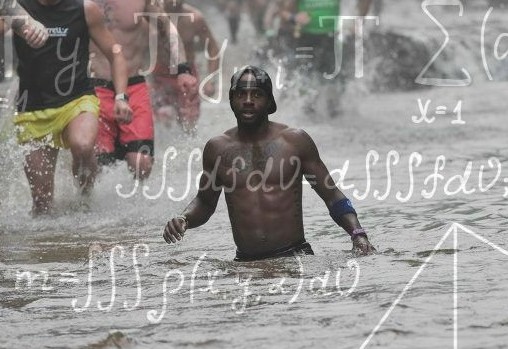 I’ve always been a lover of statistics when it comes to sports. As a child, I collected baseball…