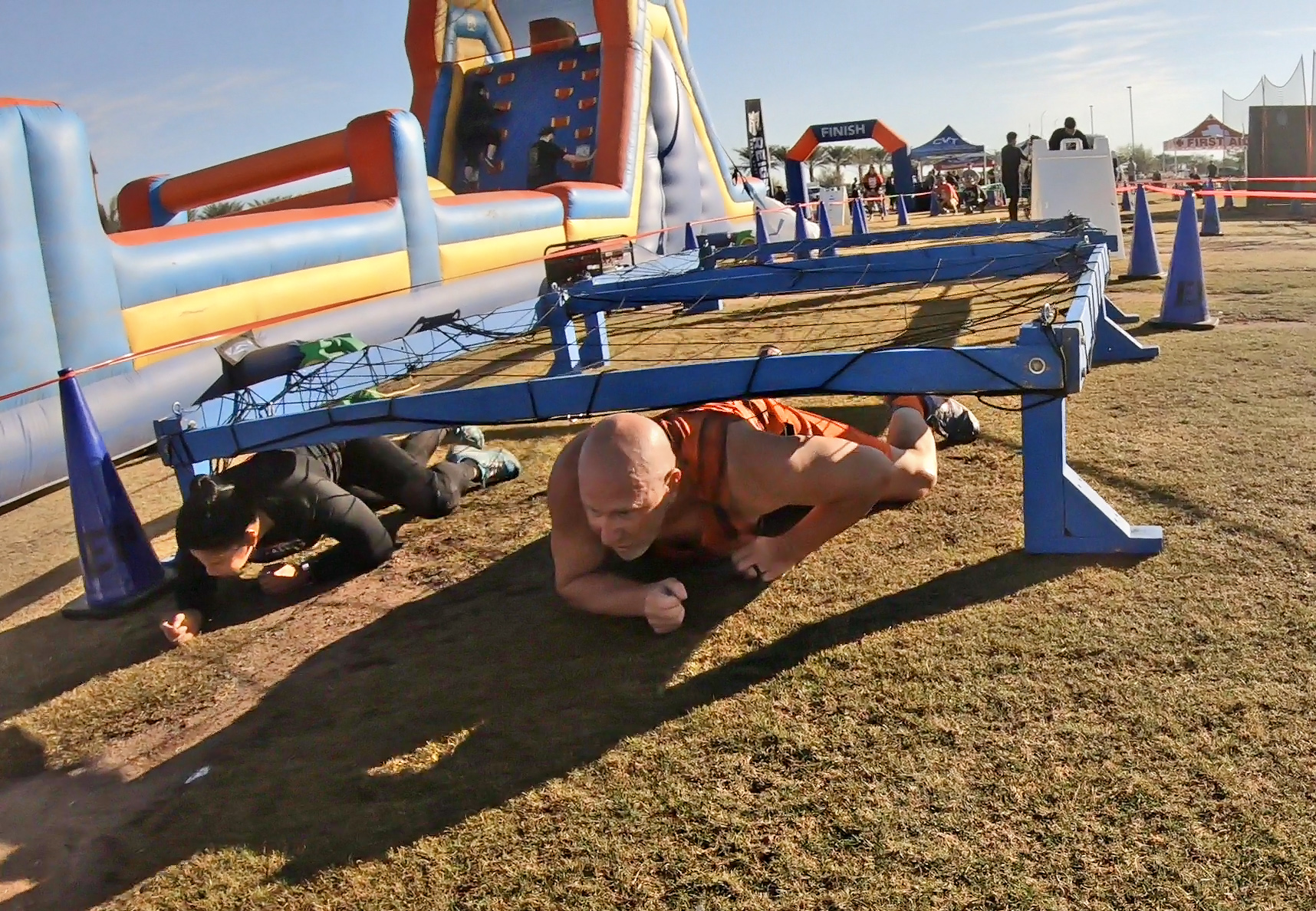 OCR and Crossfit, Crossfit and OCR. The two seem to go hand in hand as many OCR types train in Crossfit gyms and many Crossfitters can be seen running on the obstacle course race circuit. So how does a hybrid event combining the two sound to you? Well, to me it sounds pretty damn interesting and apparently it does to the folks who run Epic Series OCR as well. Now, there are plenty of hybrid events popping up all over the country but Epic is specifically designed for the OCR enthusiast. Based out of Southern California, Epic has recently branched out to states in the North and East. I happened to be lucky enough to compete in their inaugural Phoenix event on December 14th, located on the grounds of the spring training complex of the Chicago Cubs. If you’ve never heard of Epic Series let me briefly break down their course model before I get into the nitty gritty of the actual event. Epic contains their entire course in an area the size of a standard Olympic 400 meter track, so they can set one up virtually anywhere. All of the obstacles\functional movements are set up in a series of rows inside this small area. The only running that takes place is around the rows of obstacles/functional movements when a row is completed, and Epic usually has competitors pick up something awkward to run such laps. In each row there are separate workstations which have 3 separate intensity\weight levels for racers to choose from. Open class, Women’s class Elite, and Men’s class Elite with the movement\weight made harder from Open through Men’s and color coded for easy picking. In the Elite wave athletes must pick the corresponding weight\rep scheme for their division. 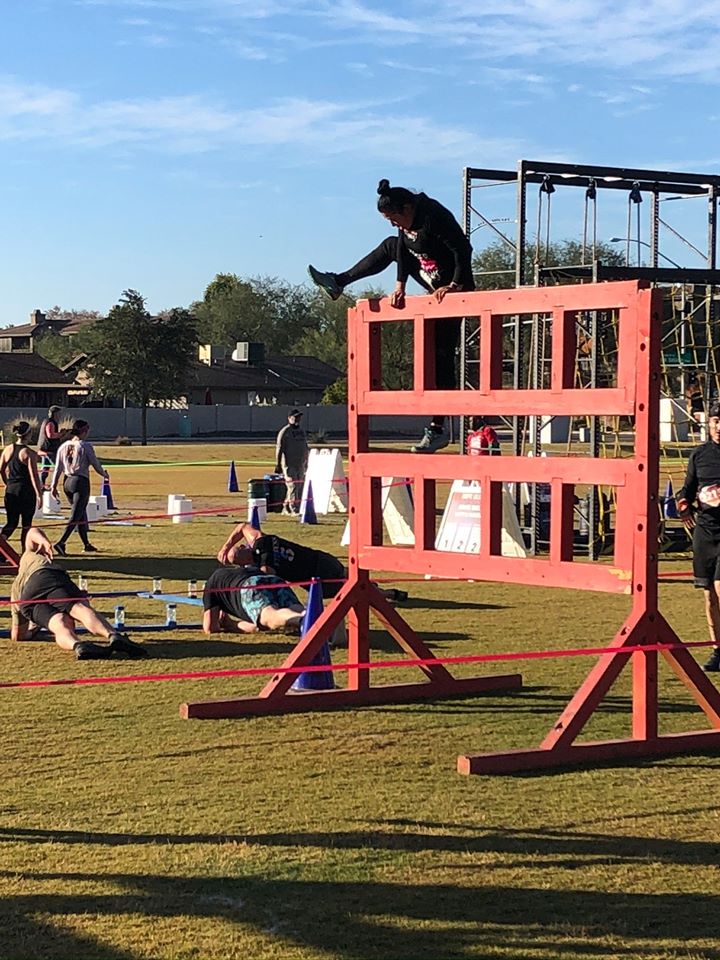 Epic starts every race with their “flag lap.” Contestants grab a large flag with “Epic Series” printed on it and run their first circle around the event area. I believe this mainly serves as a way to spread racers out and keep the first obstacle from becoming jammed with occupants. The first actual obstacle along the Phoenix course was called the over\under. Epic set up a metal pole suspended horizontally about 18 inches off the ground. 20 repetitions were required here, dropping to the ground, rolling under the bar, then standing back up and hopping over the bar was considered one rep. Once complete an athlete then picked up a slosh pipe for their second lap around the work area. The next two obstacles in lane 1 consisted of jumping over a few low hurdles and picking your way through a spider web of ropes intertwined together. Epic then sent racers out for another lap; this time farmer carry style with a set of jerry cans that weighed approximately 10-20 pounds. Your grip then got a quick reprieve, but not your legs so much as burpee box jumps for reps was next up followed by overhead squats. The weight for the overhead squats wasn’t much more than a broomstick, but after the burpee box jumps the movement was still quite taxing. Did your grip recover? Hope so, because one more lap around the event area was now required, this time carrying a beer keg. The keg varied in weight as some were empty and others were full making the full lap taxing.  I witnessed many competitors lugging the keg in front of them or setting it down to rest midway. The last movement performed in Lane 1 was the Russian twist with a medicine ball for 20 reps. 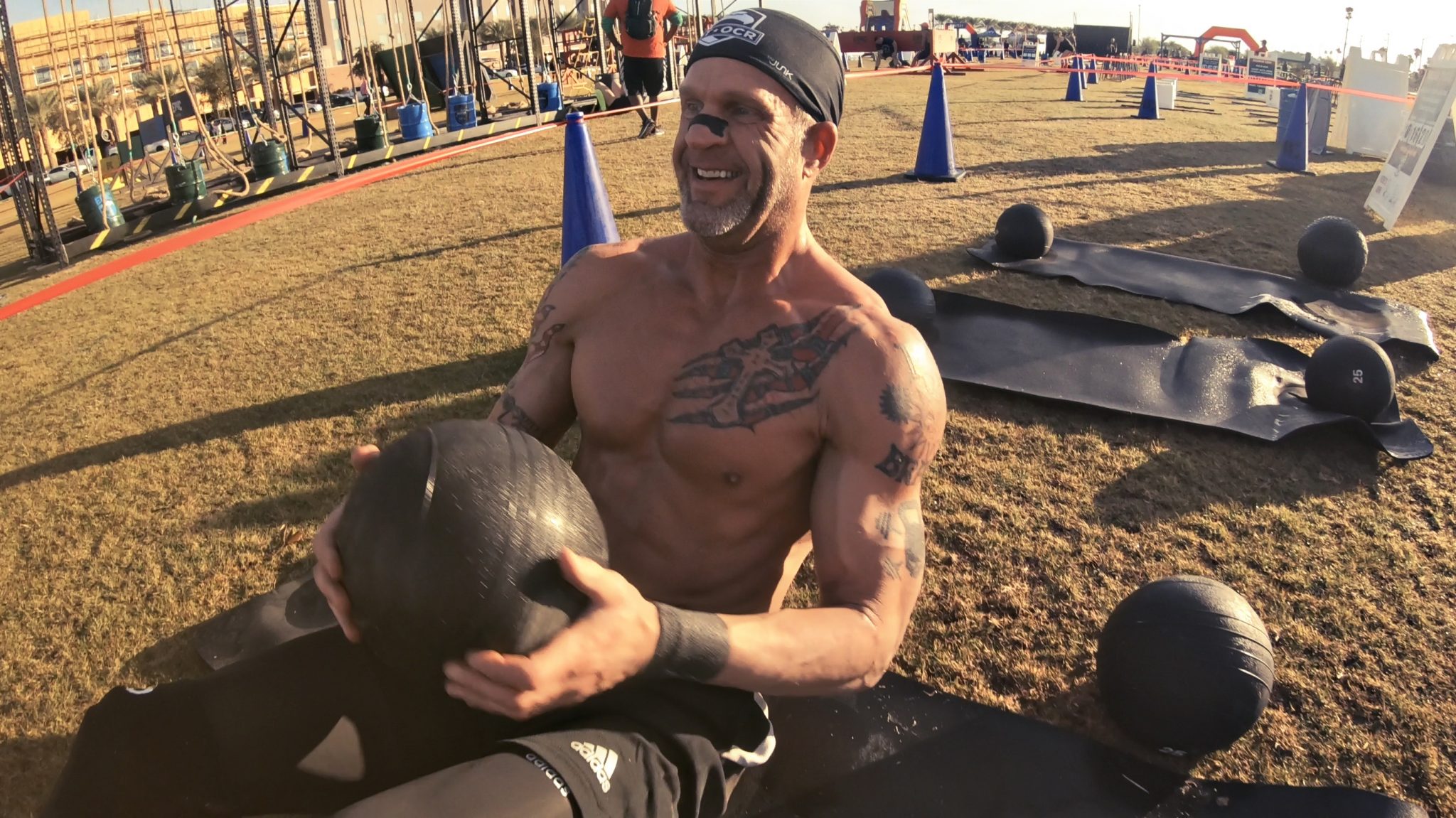 After completion of each of the three lanes Epic required a pass through their “obstacle lane”. This lane consisted of having racers climb over a series of walls. A 6 foot wall, ladder wall, and inverted wall all needed to be scaled before climbing through a bouncy house and continuing to the next lane. Yes, I said bouncy house. At first, I thought it was kind of a joke, but after climbing through and over it numerous times during the day I found it to be no joke as you just never seemed to be able to stand up in the damn thing! The bounce house also seemed to tear off racing bibs as competitors dove through it, but it was a fun addition with the slide. 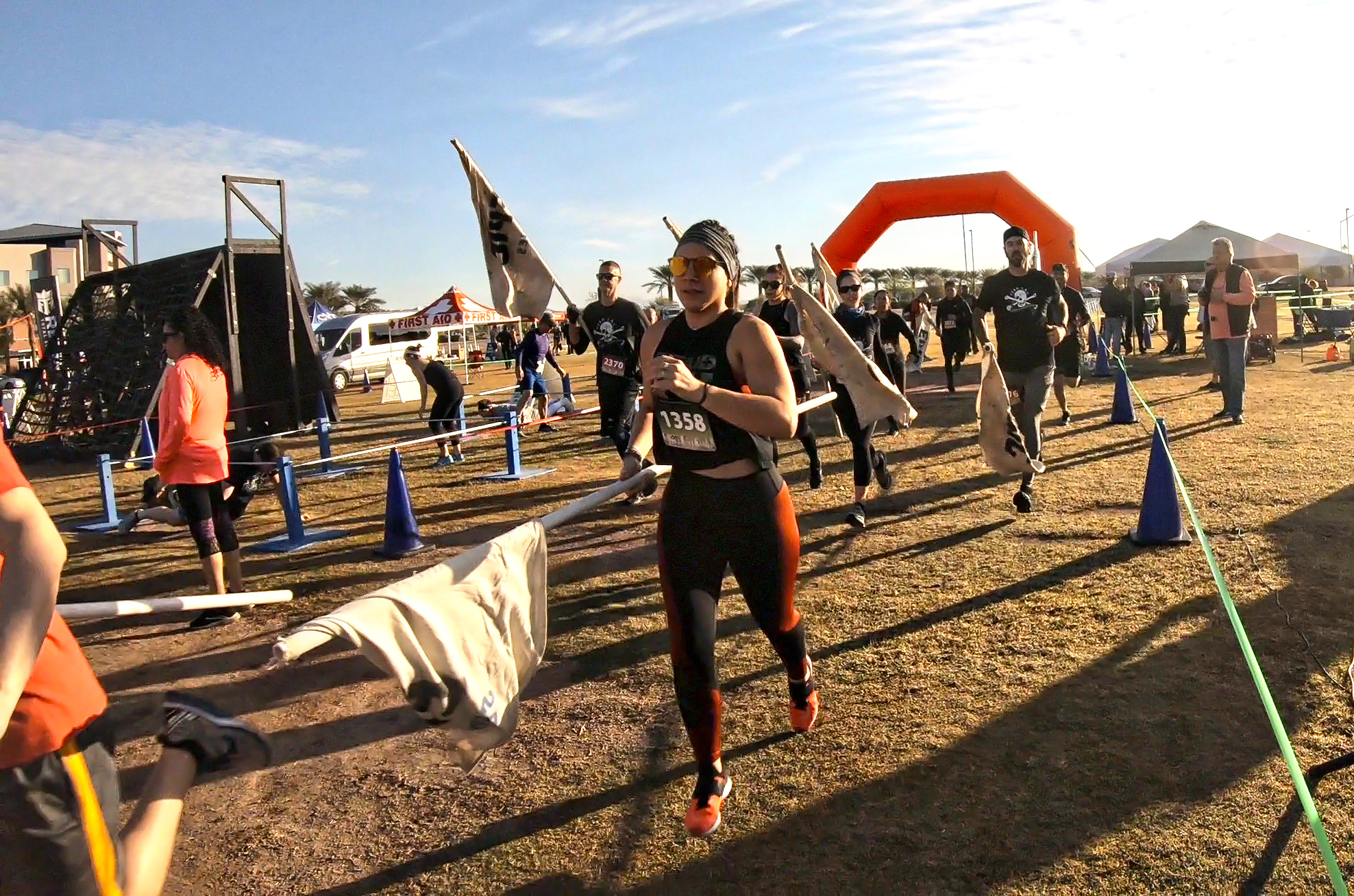 Lane 2 started by having athletes climb up and over a wall using only small rock climbing holds. This was followed up by my nemesis, the Epic balance beam. These balance beams are made up of 5 sections of horizontal planks, each topped with a series of pegs spaced a couple of feet apart. This thing gets me at least once every time I try it. It wobbles all over, the pegs are small, and it’s long. Any time I see someone fly across them I silently curse them. Once you finally got across the beams a set of battle ropes awaited you for a quick 15 reps. The Atlas Stone over the shoulder for 10 reps really got your blood pumping before moving on to the squat wall. What’s a squat wall you might ask? Well, wall sit is another name for it, and at Epic they’re timed by having the athlete hold an hourglass filled with sand out in front of them while sitting in the squat position against the wall. Male competitive time, which is the longest, is 3 minutes and not many racers make it through the entire time unbroken.  Blah and double yuck. From here you duck walked over to the last obstacle in lane 2, the keg hoist, which was like the Spartan Herc Hoist, only Epic used a beer keg. You had to hoist the keg up twice to complete Lane 2 and move onward with a second pass through the obstacle lane. 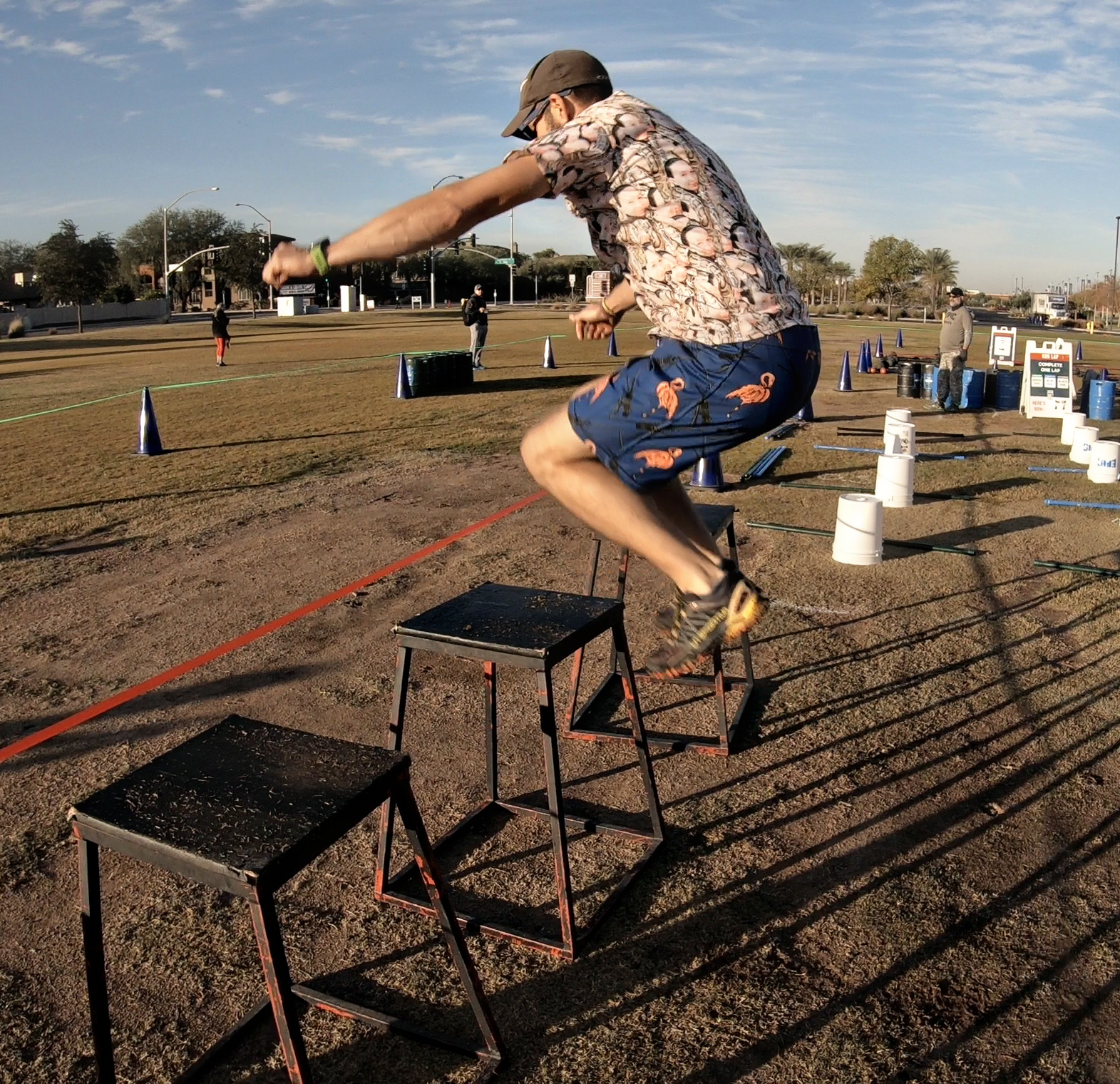 Are you into archery? Ever wanted to give the bow and arrow a try? Because the first obstacle in Lane 3 required an athlete to shoot a rubber tipped arrow at a target hung in netting. Striking the target was required before strapping an elastic band around your ankles for a short bunny hop. Kick off that annoying elastic band and you were almost finished! A quick duck and roll under one incredibly low cargo net, a plank hold for time, and last but not least, a rope climb. One last pass over the walls in the obstacle lane, through the bounce house, and a slide into the finish was all that separated you from that unique and very “Epic” medal!  The medal even has a nifty bottle opener on the back so it’s functional! 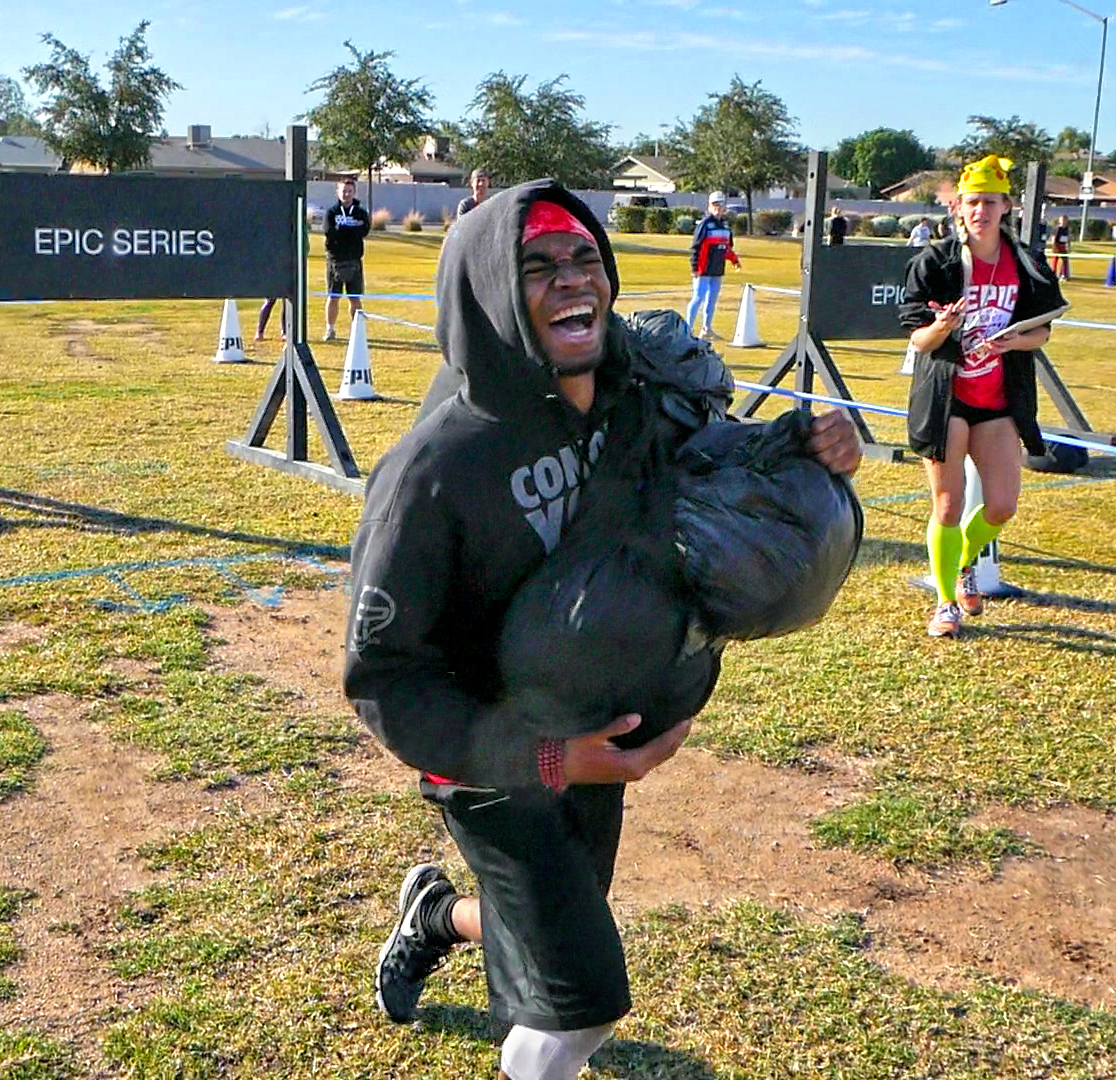 Now, you remember back at the beginning of my article when I talked about OCR and Crossfit going hand in hand? Well, if you signed up for the competitive waves you also got a chance to try your hand at the Epic WOD, where the female and male winners received a WWE style winners’ belt! Normally Epic offers an Endurance Elite option and a Strength Elite option with winners both getting belts. But due to the fact that they shipped everything from So Cal to Phoenix they just offered one hybrid course and I’ll now explain the setup. First off, all the exercises and reps were the same for male and female, only the weights were changed and there was a judge who followed you through the whole course. The WOD started off by strapping an athlete into a harness for a Nissan Titan truck pull. This was followed by picking up a long sandbag and tossing it over a 5-foot wall. The racer then followed the sandbag by jumping over the wall themselves, this was done for 5 reps. The same sandbag was then picked up and carried for a lunge for distance. The bag was then ditched in favor of a barbell for 10 reps of a clean and press. Kettlebells were then utilized for a 10 rep step up walking between 2 boxes. Your next movement again required a sandbag, this time heavier, circular version, for 10 reps of an over the shoulder toss. A true outdoor WOD wouldn’t be complete without a tire flip, right? You got it! 10 flips of the tire got you moving on to last movement, the deadlift. All it took you was 10 more reps here before crossing one more balance beam which led to the finish. 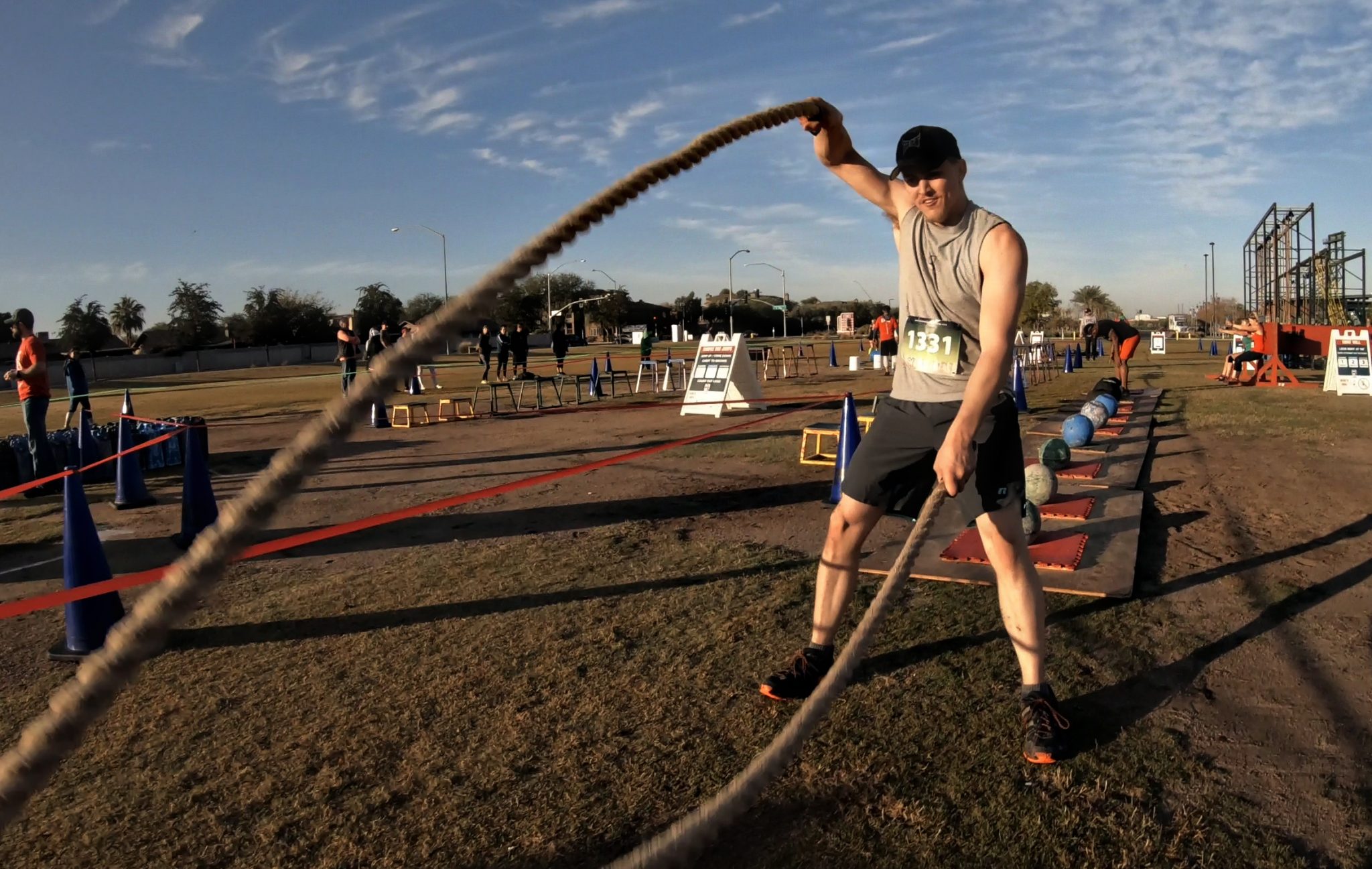 To add to the enjoyment of the day, Coach Pain lent his iconic voice as the emcee reminding everyone to Conduct Your Business! I’ve always found the Epic Series to be extremely challenging, yet fun. If you’re a Crossfitter curious about OCR, or an OCR racer who’s tired of the endless running then this series is for you! I’d also like to give a shout out to local resident Jamie Hines for bringing his supreme photography skills to the event. Jamie, it’s always so nice to see you and your lovely wife filming while I’m on the course!  Now get out there an BE EPIC! 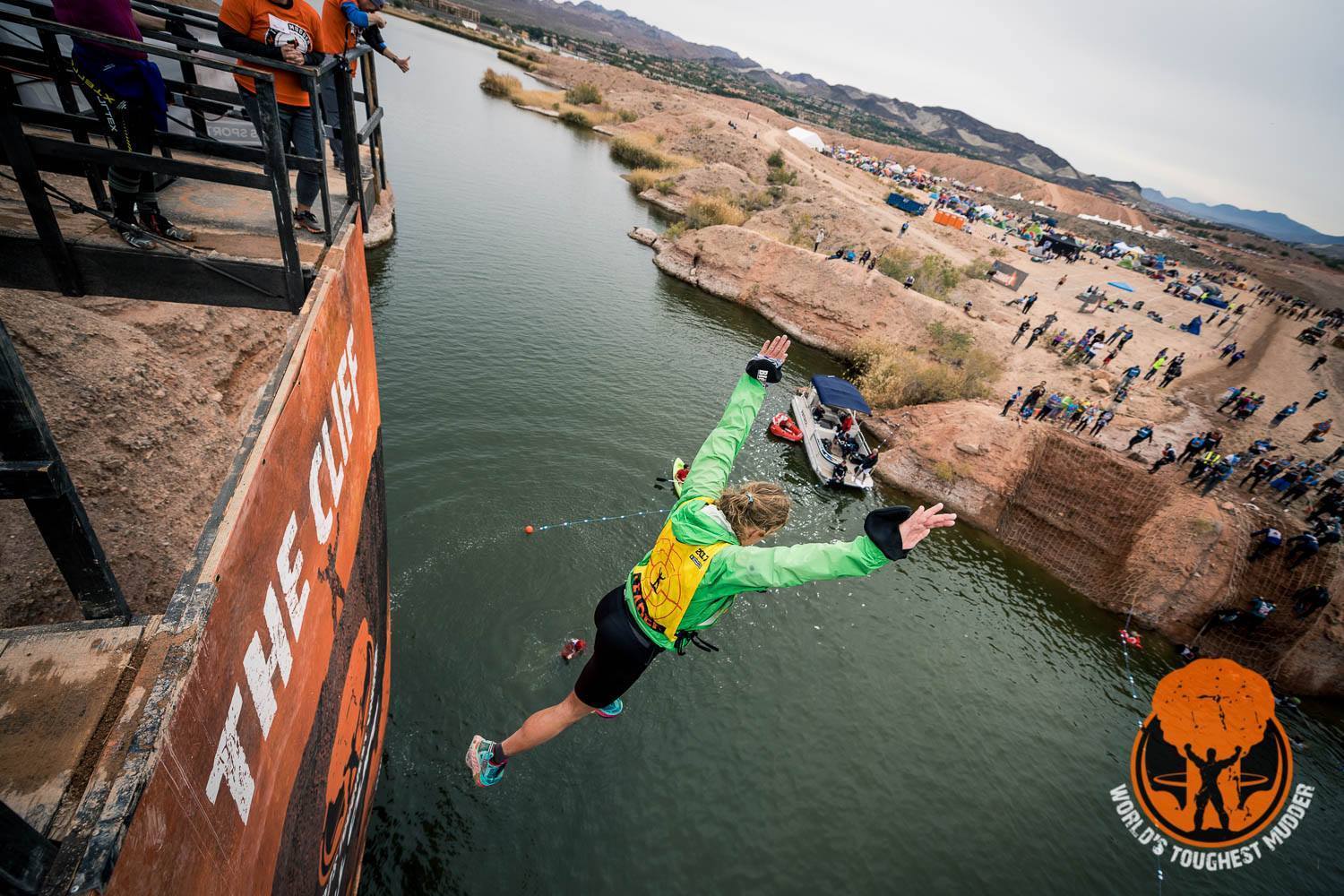 A word of warning – this race review is LONG! But so was the race and no matter… 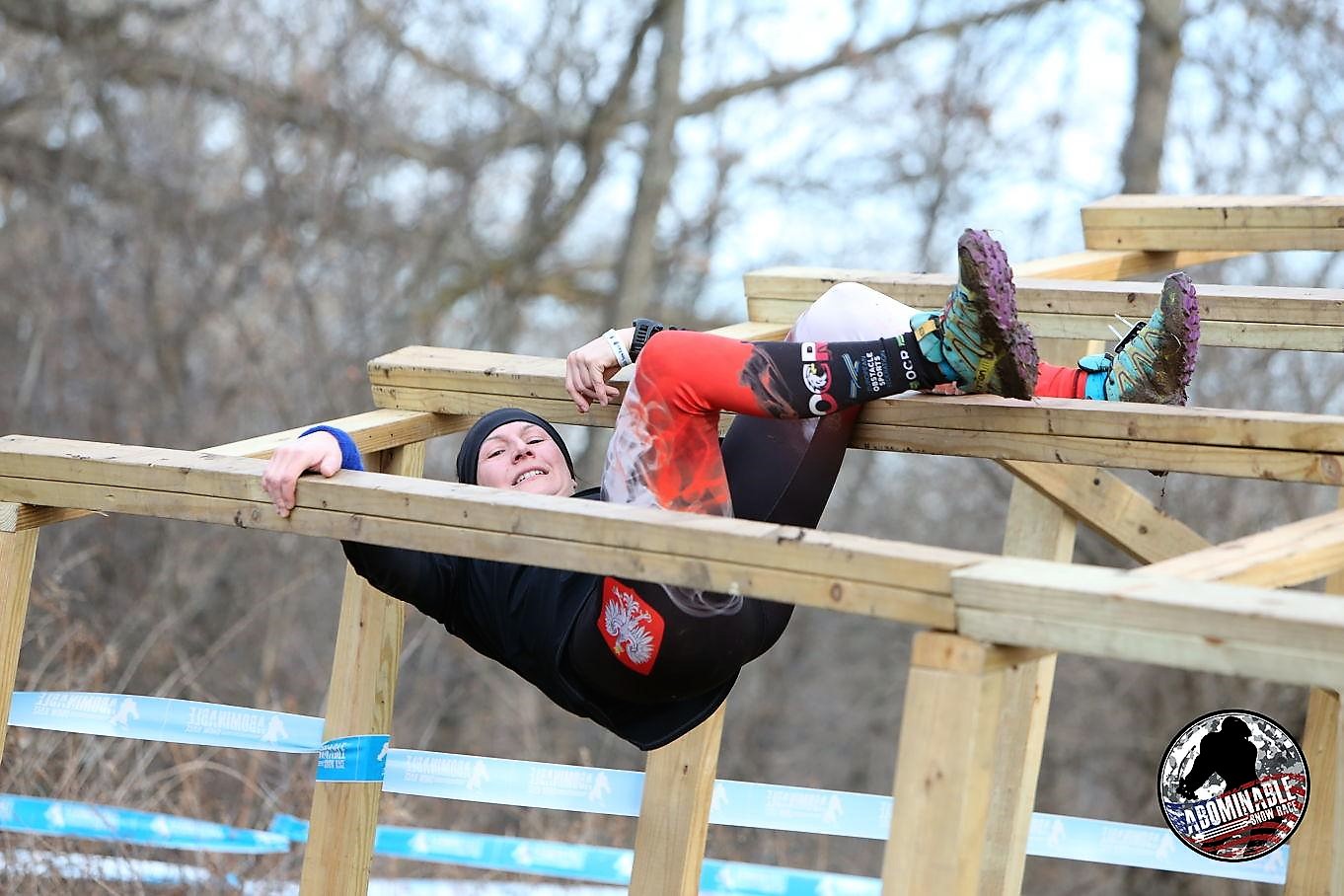