After coming out swinging in Temecula with their Trifecta weekend filled with four races, three distances and a host of new obstacles, Spartan arrived in Arizona prepared to land that sneaky left hook. They delivered a resounding shot. There were 26 obstacles presented this year in comparison to the 15 from the year before and course distance was increased from 3.5 miles to 4.9 miles at the Ft. McDowell Rodeo grounds; the same venue as 2014. This location is right off of a State highway, easy access with a hotel/casino three miles down the road, and had on-site parking.

The first two thirds of the race was your standard, flat-ish type of Spartan Race. There were rolling hills and trail runs but with plenty of room between cactus to get around congestion. Several new obstacles made their way on to the course; however, with a downhill start for Bucket Brigade and Sandbag Carry, those two normally tough obstacles were the easiest to date. The five-foot sheer mud wall at the Rolling Mud forced Spartan employees to include climbing ropes so that racers could climb out and escape the sucking mud. Otherwise, there was no escape and no climbing out of it. Which was awesome. 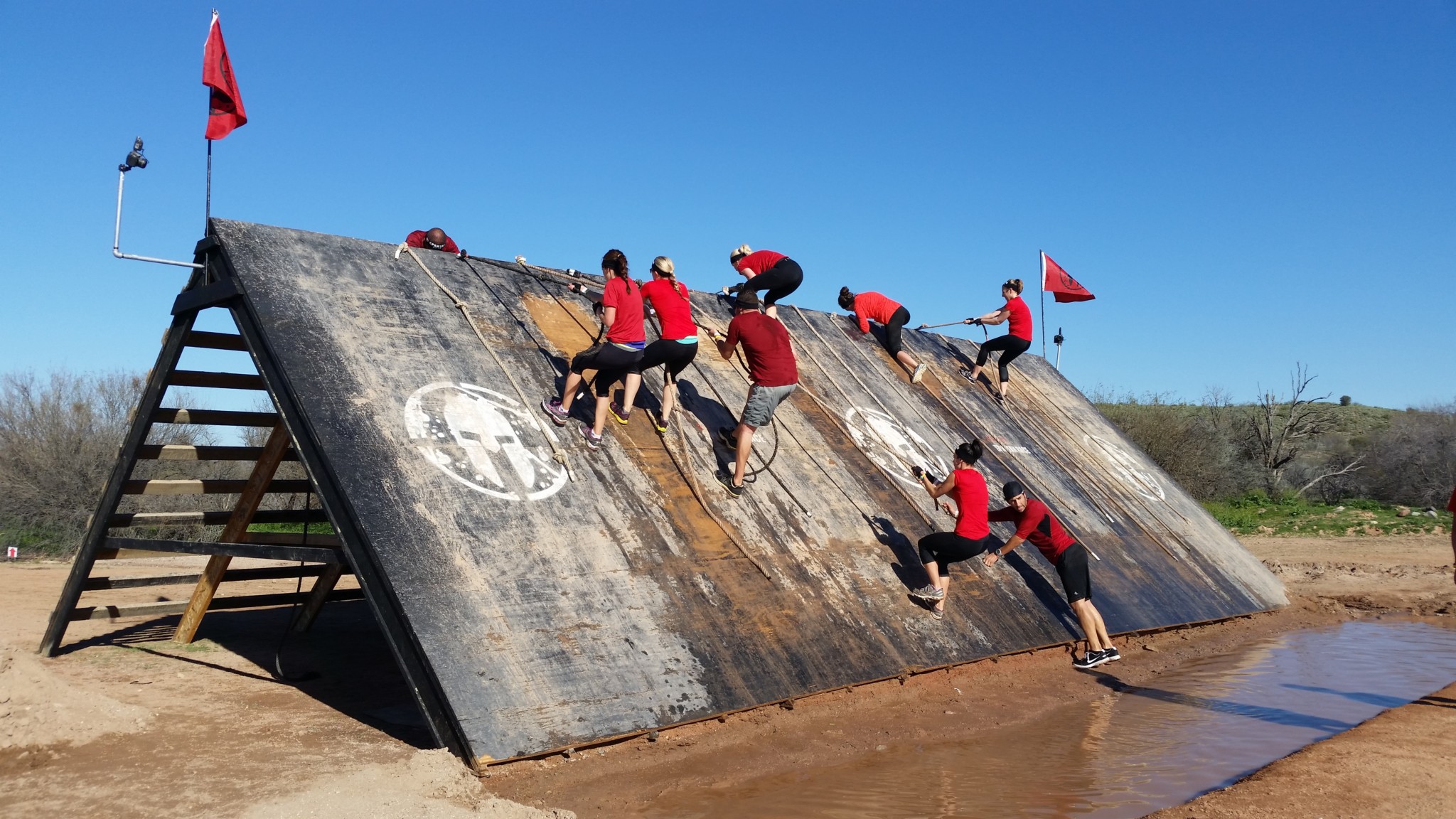 Where it really shined was the final mile and the main punch was the “gauntlet” of seven obstacles at the end; MultiBar, Hercules Hoist, Spear Throw, Double Up, Rope Swing, Barbed Wire Crawl, and new Fire Jump. If you look at the first three obstacles in this gauntlet, you can see how this could create a 90-burpee journey in the span of 100 feet, and very few racers escaped without having to do burpees here. 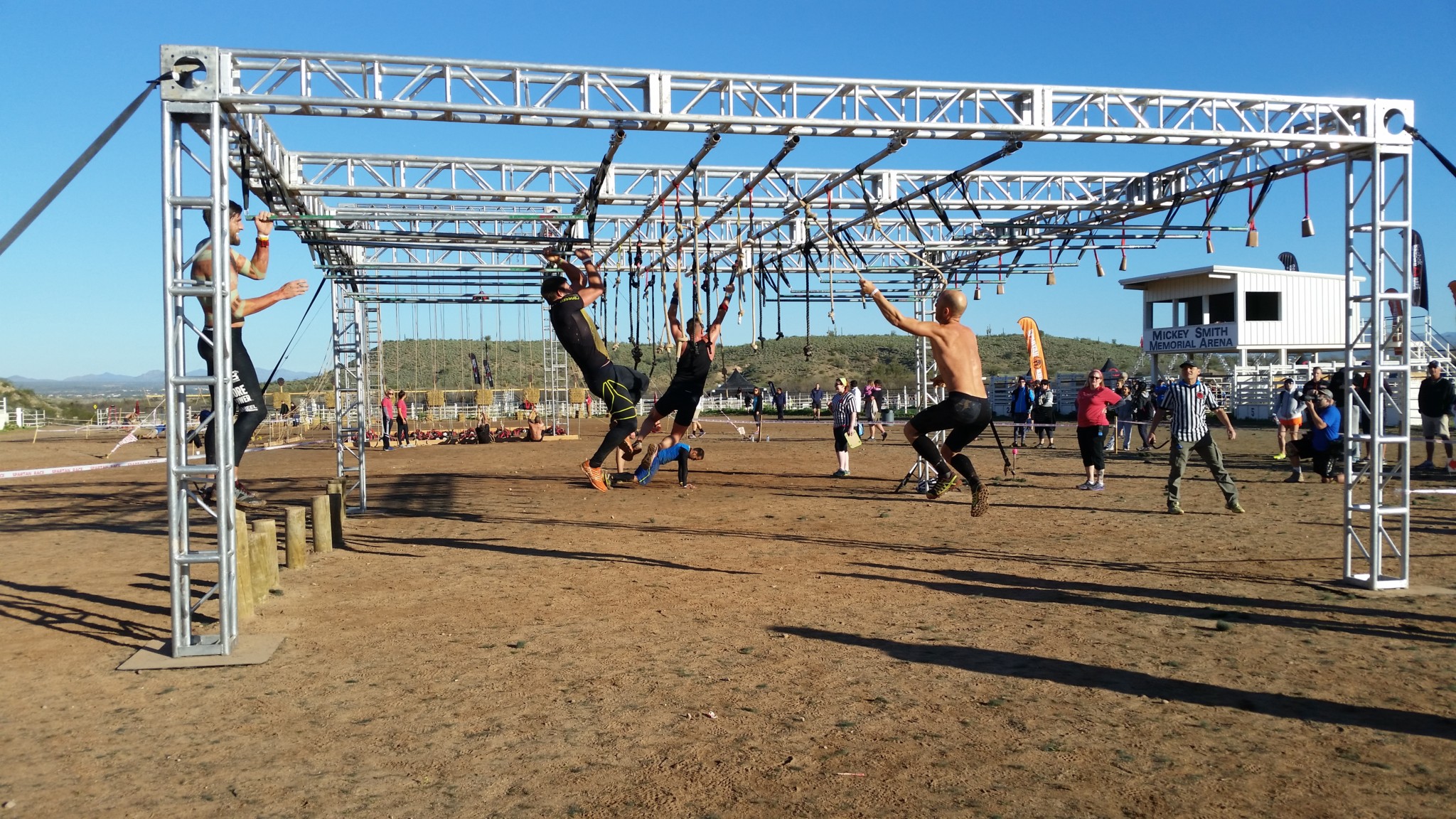 The MultiBar starts with a horizontal hanging metal pipe that you shimmy across using only your hands, then transfer to a set of three vertical hanging ropes that are spaced about a foot and a half apart, followed by another horizontal handing metal pipe that you transfer to so you can shimmy across it and ring a suspended bell. 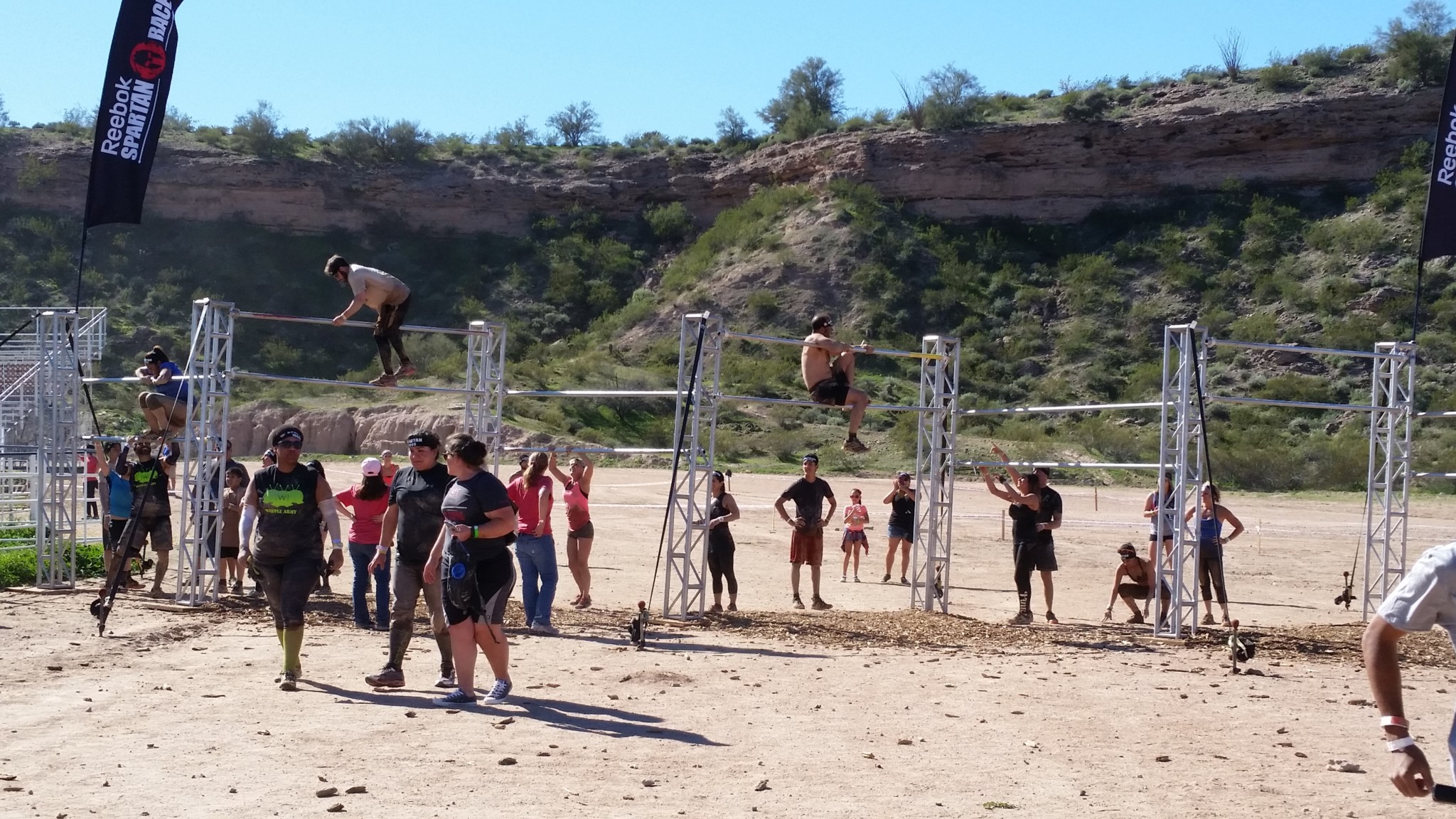 This was followed by a Hercules Hoist. Spartan has increased the difficulty of this obstacle not by increasing the weight, but by removing the ever-present fencing in front of the hoist that racers used to brace their body and feet on. It has been replaced with a string and a long 2×4 secured to the ground, which does not allow you to put your feet under and pull. The men’s hoist is 135lbs dry. However, if there is moisture that hoist weight can and will increase as the bags take on that moisture. 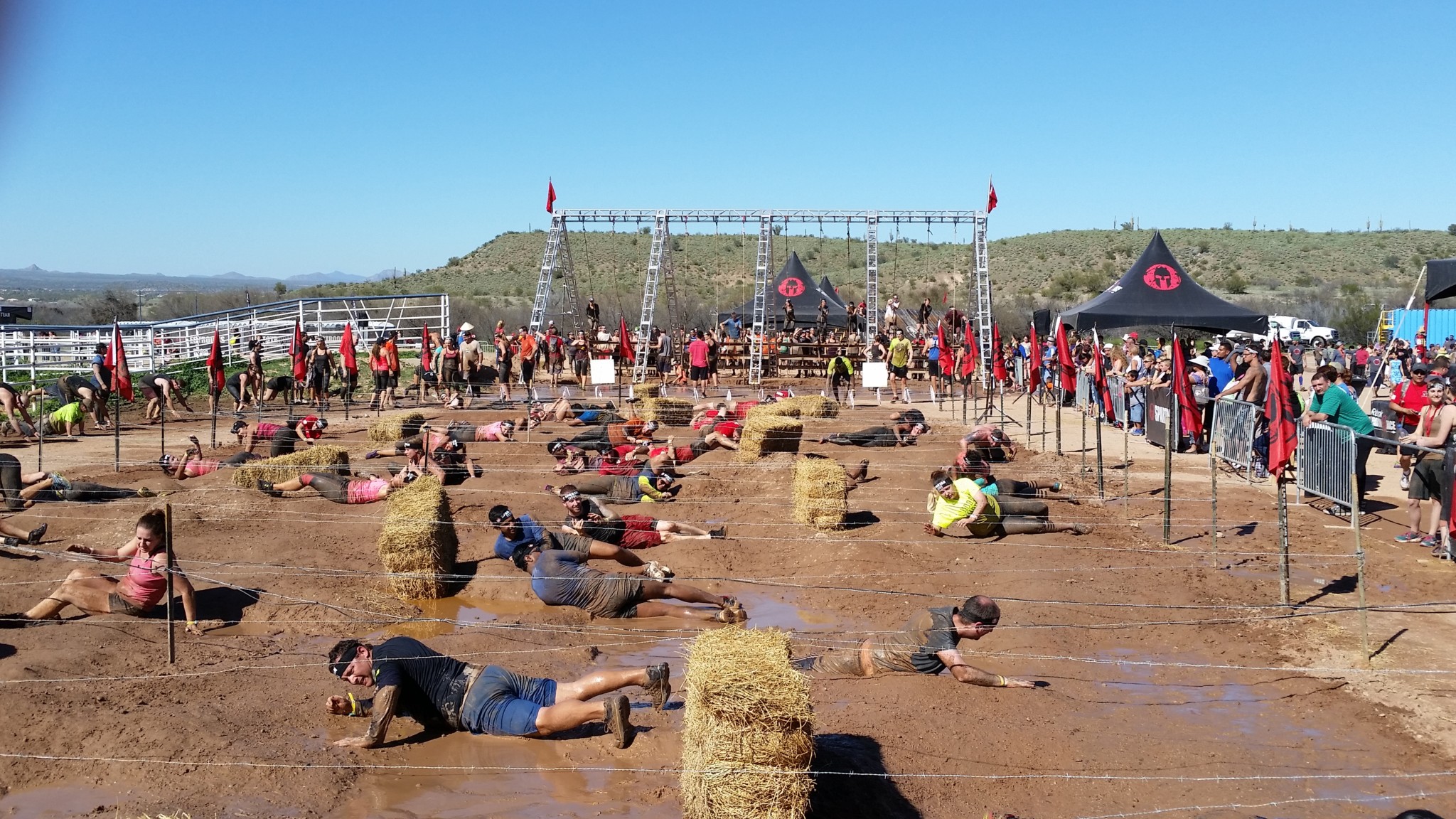 Hands hurting from the hoist, it was on to the spear throw with the tethers on the back of the spear so that each racer can pull it back and with a successful throw. I was off to the Double Up, a simple looking obstacle that looks like two chin up bars, one on top of another, where you are to climb up and over the top bar and back down. So muscle up, grab the top bar, slide over it and back down to face the Rope Swing. Interestingly enough, when I encountered this contraption in Temecula, I found success before Spartan made some necessary safety changes such as adding a higher third step and increasing trench depth so falling into is safer. Since those changes, I have found failure and 30 burpees every time. By this time, Spartan has done what it could to deplete your grip strength. I pulled on the tether connected to the rope, grabbed the knot, made sure that the rope and tether was not between my legs, made a jump up as I reached higher up the rope to try and ensure that I was high enough to miss the water. My grip strength was gone and I landed face first in the water and found another 30 burpees. 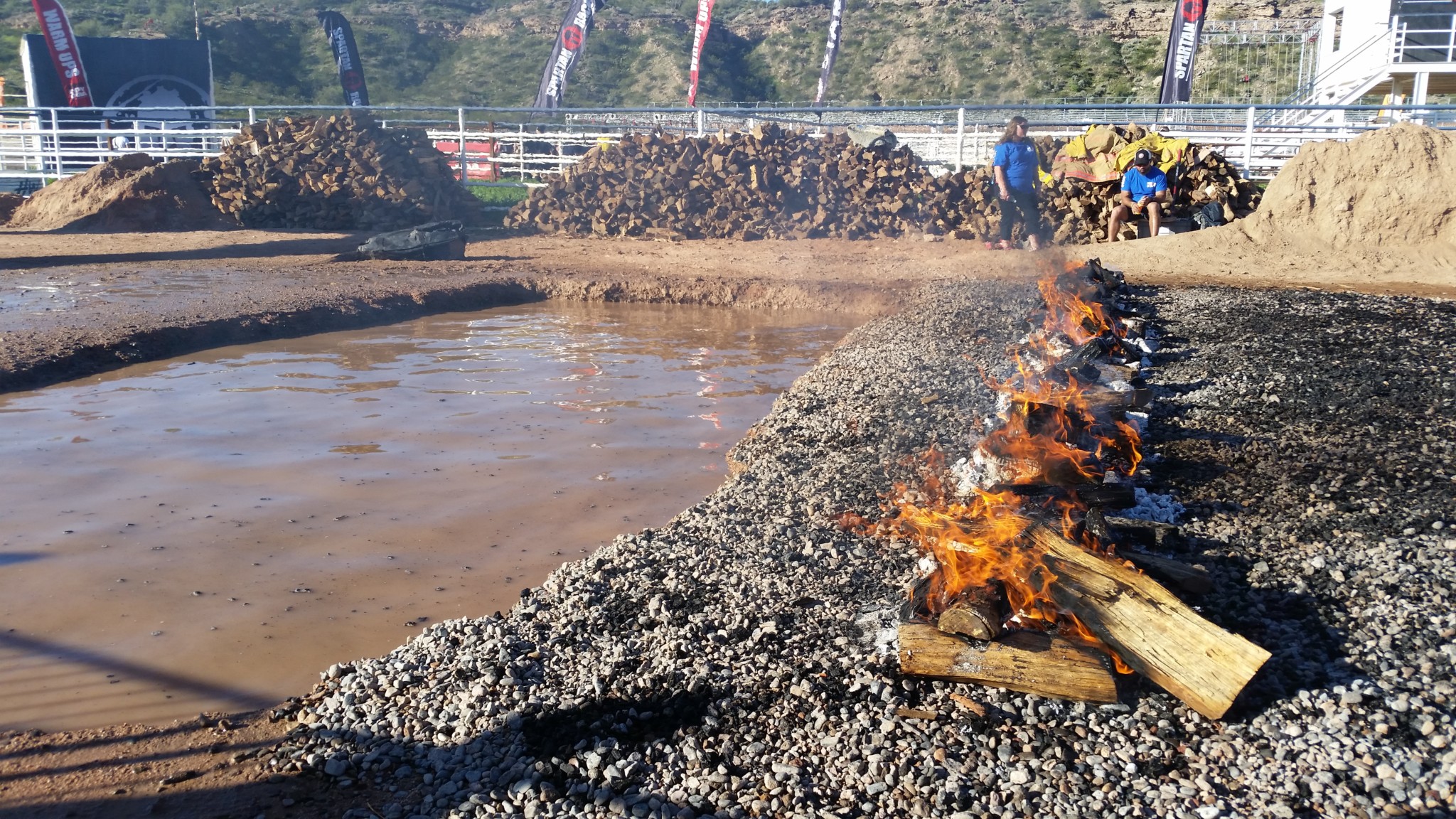 After that epic fail was a 100yd barbed wire crawl with moguls and hay bales throughout. Crossing under the bridge that was near the end of the crawl, I scurried my way through and stared at the new fire jump. It seems that ever since Spartan discarded their gladiators, they’ve been constantly trying to retool the fire jump area. This time around, the fire jump was a short 12-15 feet away from the end of the barbed wire crawl and the course designers dug out a four-foot deep, seven-foot wide trench and filled it with water. Naturally, I cannonballed into it, backstroked to the other side and crossed the finish line. A very satisfying event this year with combination of the new obstacles, more obstacles and final gauntlet making this event one of the more difficult, but fun Spartan Sprints that I have raced on. 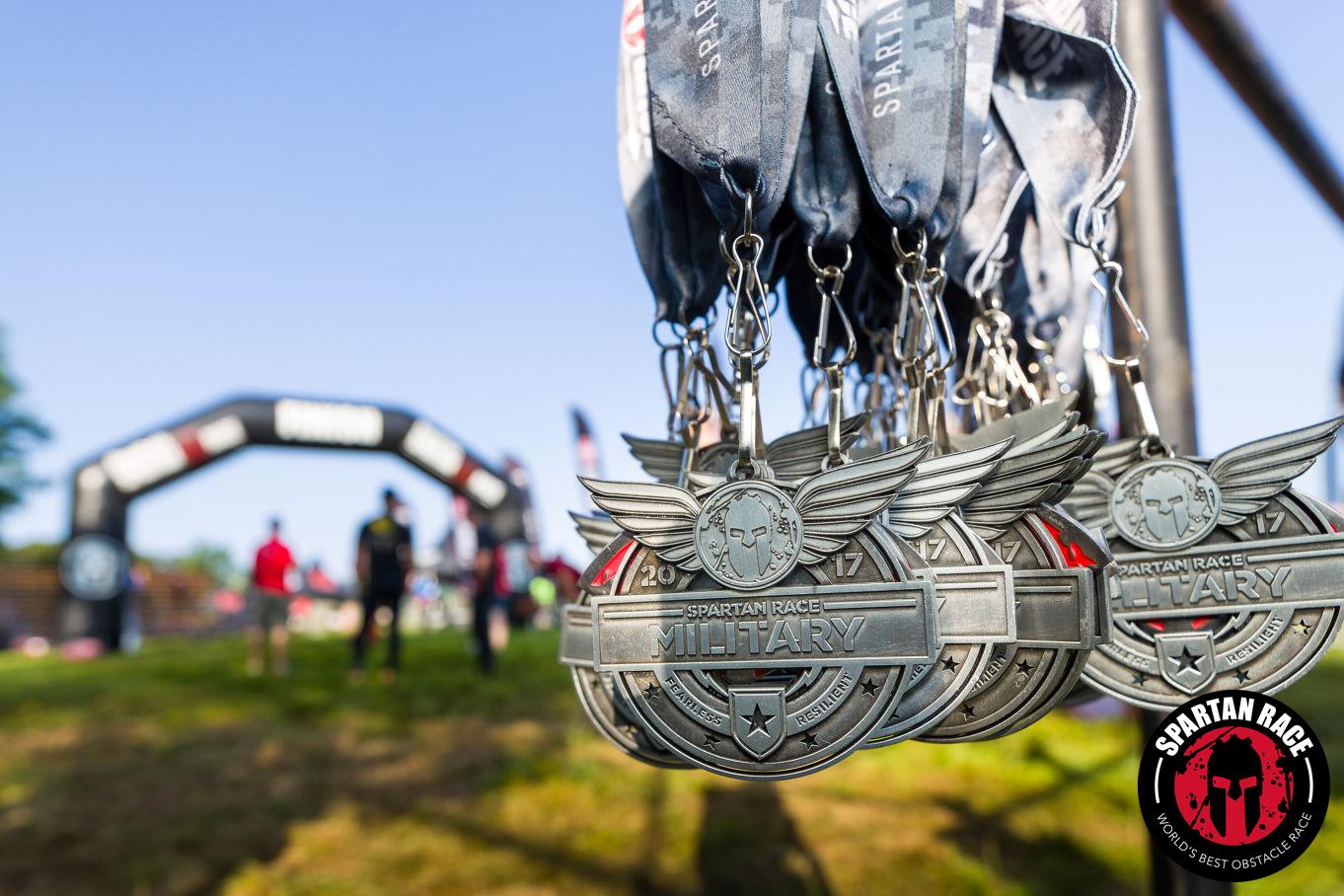 I usually need a few days to gather my thoughts of the Killington Beast, and I was hoping… 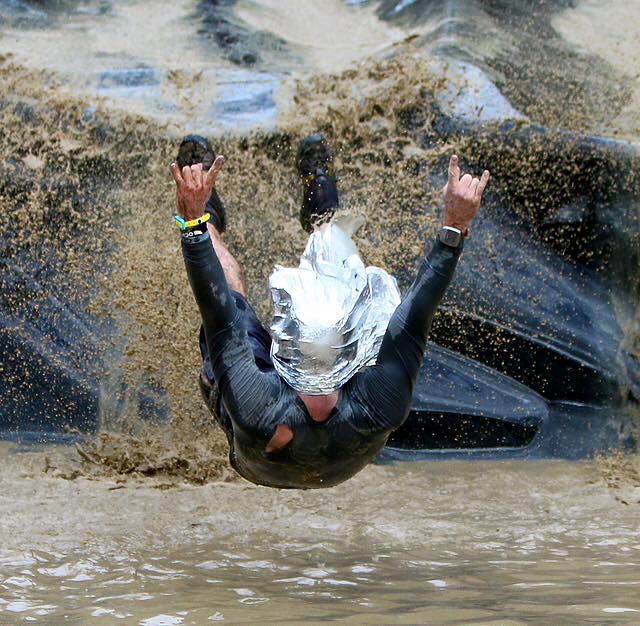 Prologue-2015 OCRWC 7:05 AM, Lebanon, OH – We walk the two blocks down Main Street towards the breakfast…