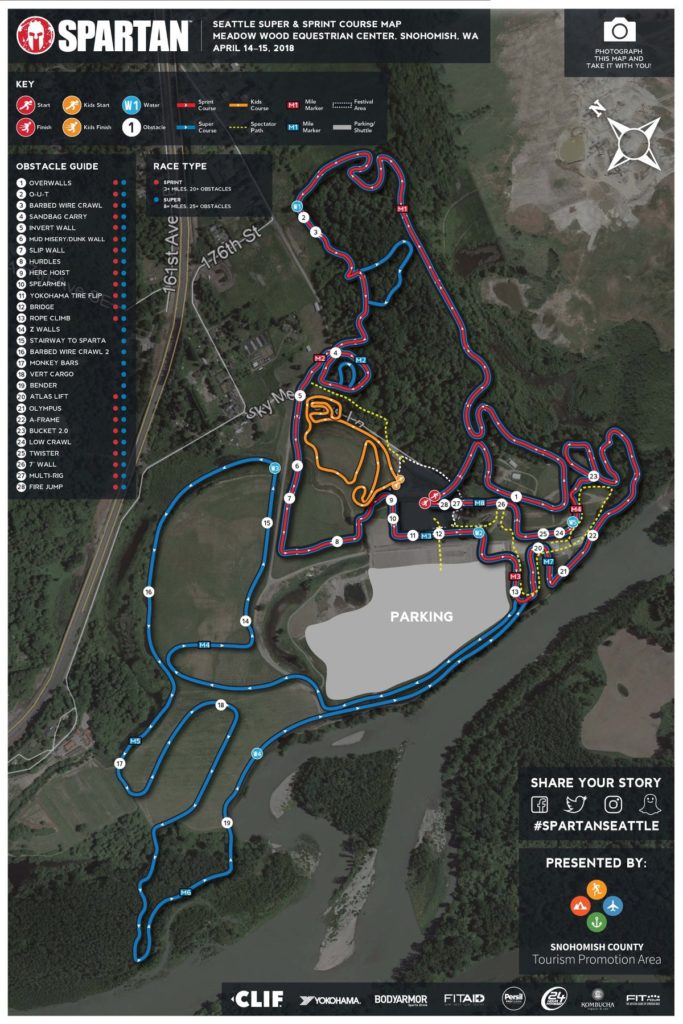 Prelude:
Yeah, I know that “Just do it!” is the Nike slogan, but that’s how I felt about writing this Race Recap. “Git `er Done” would be another quote I could use… I was really on the fence about writing it, but I knew I really just needed to sit down & suck it up & bash away at the keys for a bit & get this out. I apologize if this race recap doesn’t hold up to most of those that I have done in the past but it was a rather in & out experience this year. Just a heads up right now, this is more of an account of my experience up to & during the race than a race recap.

Day Trippin’:
It all started Friday, my buddy Troy & I headed out the door midday on our 2-hour drive to Seattle. The border crossing was quick & easy but the whole drive into Seattle was just horrendous due to the sheer amount of rain that was coming down. It was so thick it was almost like a fog. We arrived in Seattle in the early afternoon & decided we would wait a bit longer to head to the Open House at the site to see if the rain would subside. The rain never did subside & even though the site was only a 25-minute drive away we decided to skip going as we didn’t want to get soaked & miserable the night before the event. In the end, we regretted not going so we decided we might just as well take a stab at it. The rain let up a bit finally around 5 pm. When I checked Google Maps the traffic looked rather bad as the trip time was now at 1:30 so we decided to just stay where we were & not fight the traffic & bad weather. 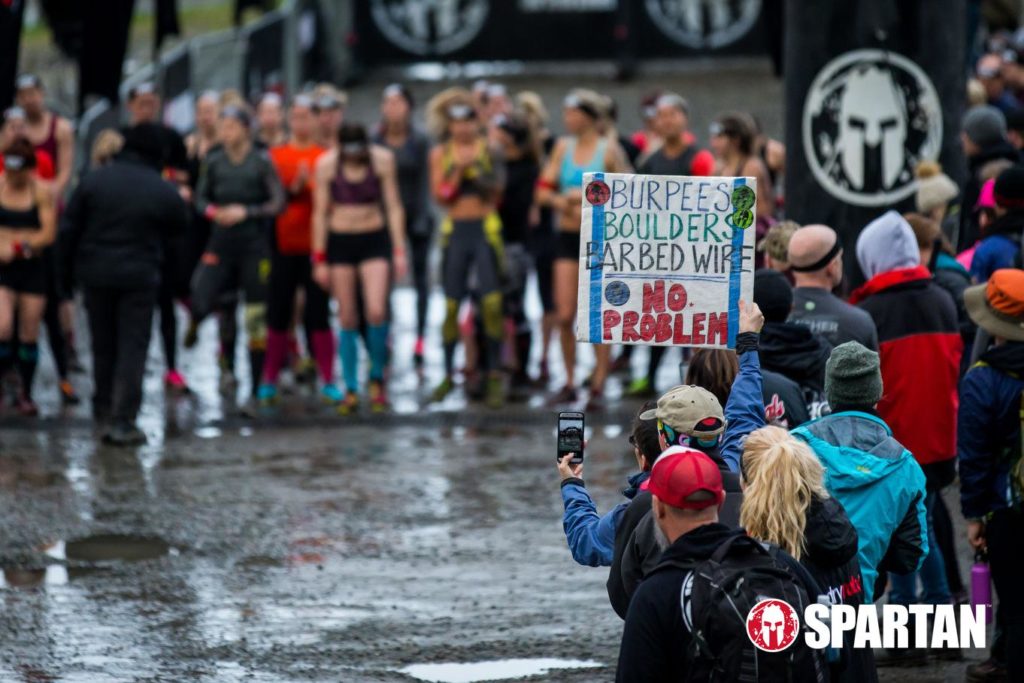 Getting to the Event:
Our wave time was at 9:30 am so we decided to head out at 7:30 am. Well, it looks like everyone else decided to do the same thing as Google Maps stated it would take just over 2 hours to get to the site. We grabbed our stuff & headed out. The weather was a bit better on Saturday, it was now only raining slightly & in spurts so I was optimistic that the day would go well. Our drive to the event site was pretty easy going & we were making good time so I was unsure what Google Maps was talking about & then we saw it… We were driving along the two-lane highway & we saw the Event Site off to our right just within grasping distance. I also, however, saw in the distance what looked like a line of cars parked in the shoulder on the Highway. I figured it was just a bunch of desperate people parking on the side of the Highway then walking to the site & then realized, nope, that’s a lineup of cars trying to get to the exit! We were still 4.5 Km (2.8Mi) away from the entrance to the site. We still had an hour & a half to make it to the site & it looked bleak. The line moved quite slowly & luckily didn’t seem to stop much. We didn’t end up getting to registration until nearly 10:30 am! It ended up taking us 3 hours to get to the site when it should have only taken 25 minutes in total! 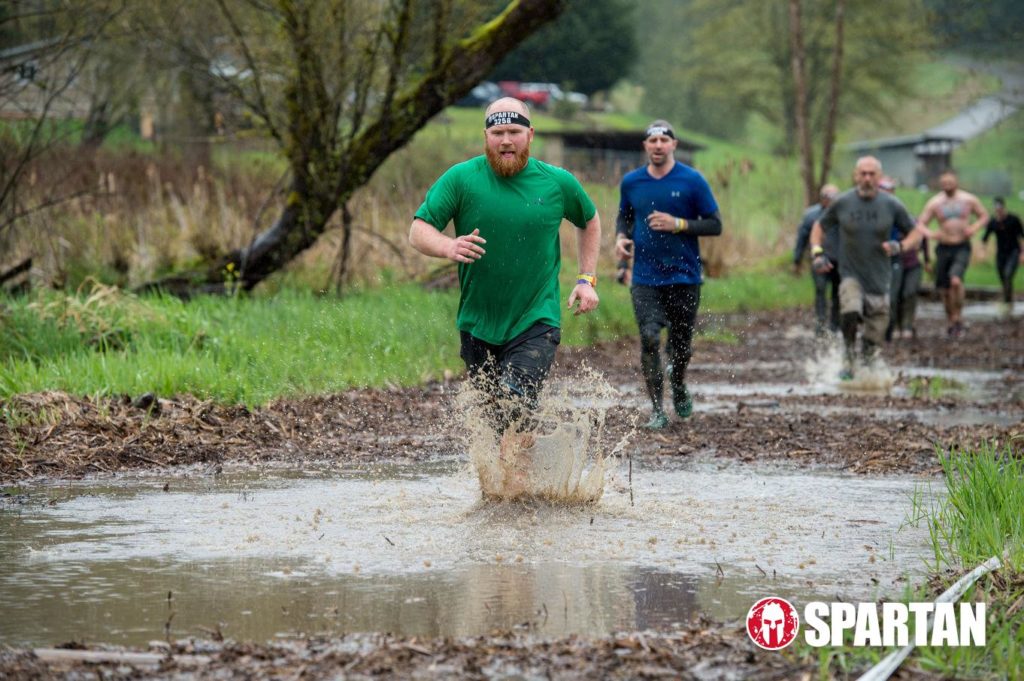 The Event:
Despite all of the rain, this year seemed to be less muddy than last year minus the parking lot. I read posts from others stating they thought it was worse, but I don’t think they recall the sheer amount of goopy shoe & leg stealing mud that there was last year. Yes, I can say now, it was muddy, but I still think last year was worse. The parking lot seemed worse than last year as we saw several people stuck just entering the site & getting towed out of their ruts. Registration & bag check went quickly. We set off in the 10:45 wave & headed straight up the first hill. It wasn’t all that slippery yet & it wasn’t very long. The released map had the course @ 13 Km (8 Mi) & was strangely accurate as my Garmin clocked it in at just over 13.75 Km (8.5 Mi). For me, the rest of the event was a bit of a blur. Head down & determined to finish. It rained lightly most of the time I was on course, at one time there was about a 15-minute downpour. I wasn’t in my normal happy go lucky talk to everyone & splash people with mud head space during this event. Probably due to missing the Open House & all the darned rain. 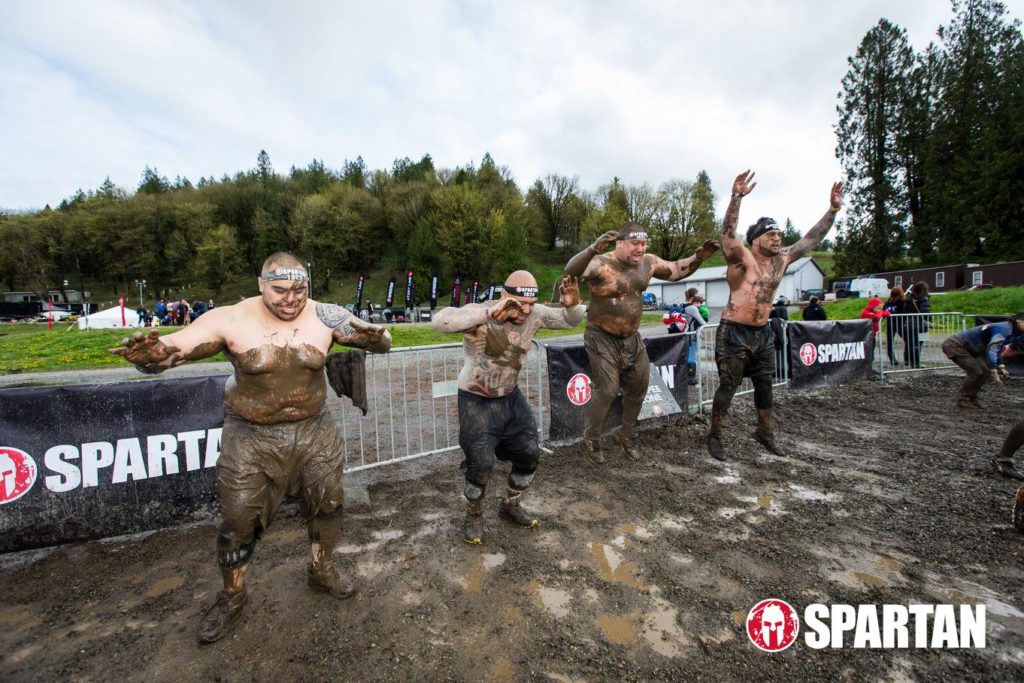 Luckily I put on multiple layers. There were many that were wearing WAY less, but I am glad I wore those layers as I was relatively warmer than I was last year. Towards the end of the race, we came across a young girl that we had seen earlier on course, she was only wearing a shirt & shorts & was shivering & delirious. I gave her & her dad one of my Mylar blankets & a pack of hand warmers to help her. Volunteers had called medical & I saw them coming so I left them to it & kept on. I got ahead of myself there, sorry… 28 Obstacles, they didn’t seem as hard as last year. I was able to get the Herc Hoist without much trouble where I barely moved it last year & needed a second person to help get it done. 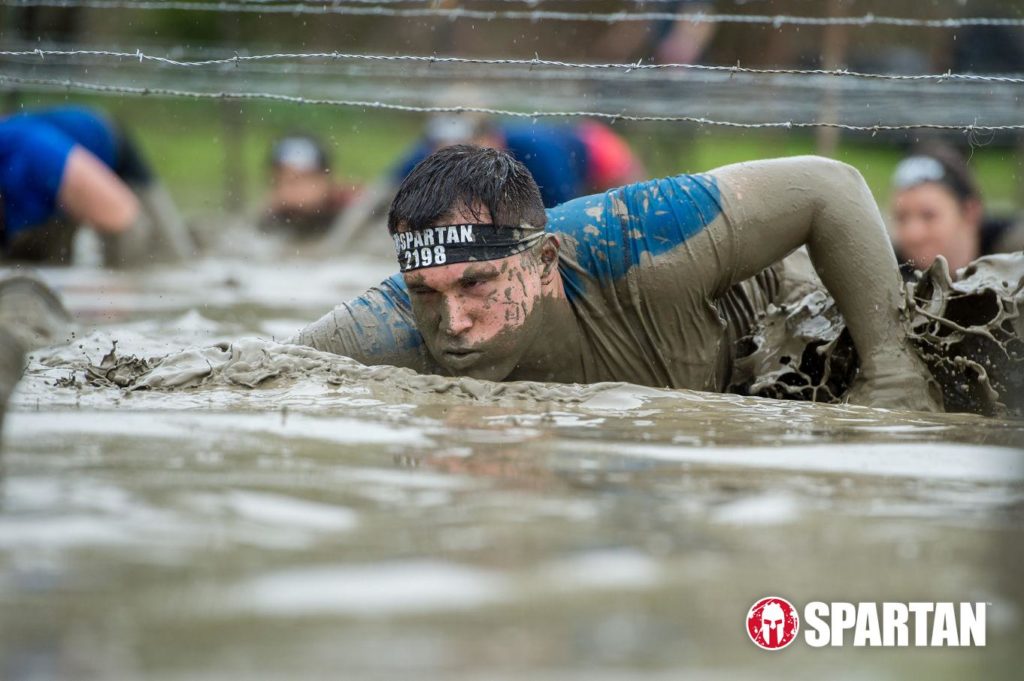 The Barbed wire crawl was quite long & broken up into three sections. I remember people finishing one and then gasping that there was another & yet another as they were all quite long. I would have had a solid hit on the Spearman if it wasn’t for the large knot in the rope. Everyone around me agreed it was still a viable throw so I tied the rope up so no one else would use it & moved on. 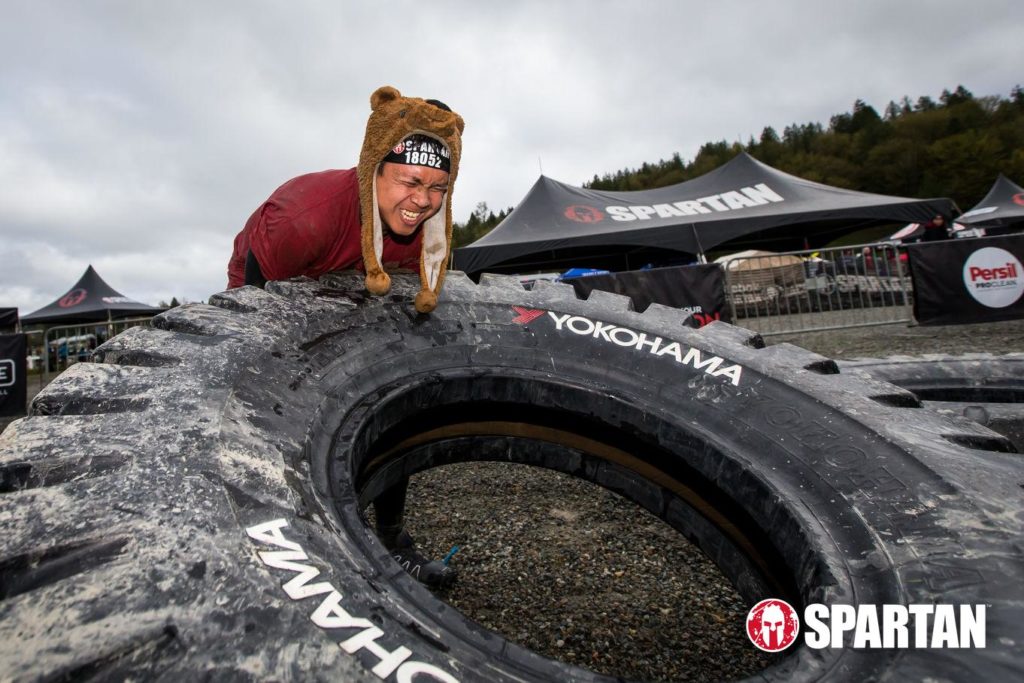 The Yokohama Tire Flip was next. Those tires were freakin’ heavy & I ended up having to get help with flipping it so I did half the normal amount of Burpees. 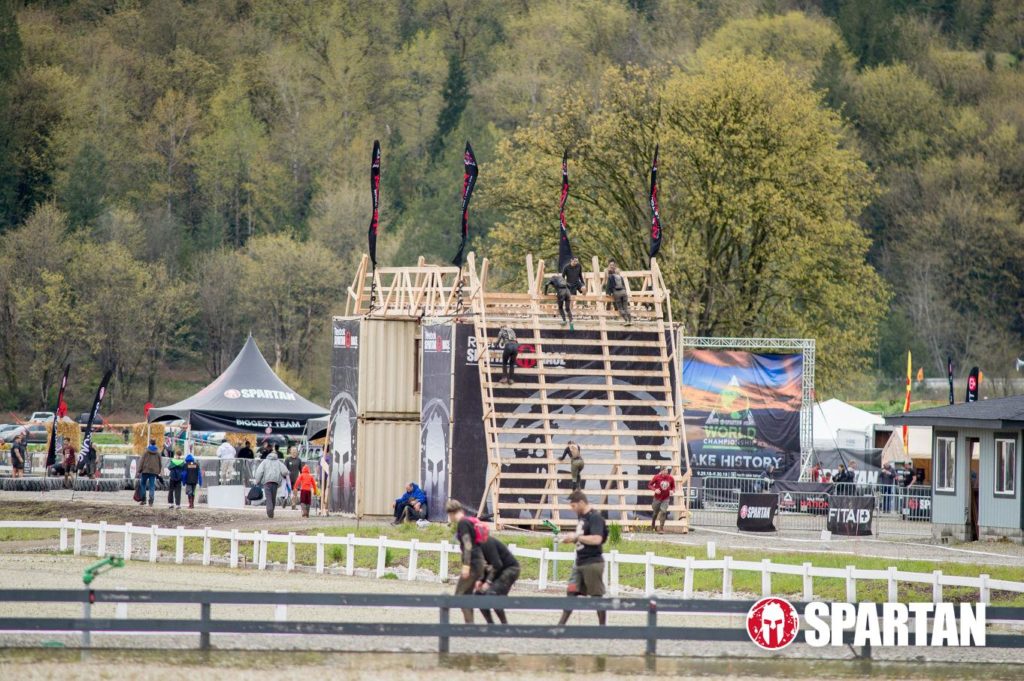 The Bridge they built out of Storage Containers over the entrance was pretty awesome. I recall them trying to do this last year at Mt. Seymour but they ran out of time to get it done which is too bad as it was fun to climb up & over those waiting to come into the event area. After the Bridge came the Rope Climb. Only recently at my local gym had I gotten about halfway up a rope & it’s something I’ve always struggled with. Well, today was a new day! I actually got all the way up that freakin’ rope climb hung on like hell with one hand & rang that bell! If there was one take away from this race, it’s that I finally got to that darn bell! Sure, I’ve gotten most of the way up with knots in the past, but I’ve never gotten up one without help before. Yay me! It looks like the training & techniques are finally rubbing off! The second Barbed wire crawl was broken up into sections again but the whole thing was more like a swim as it was totally submerged under water & it looked like some were struggling to even keep their heads above water at times. 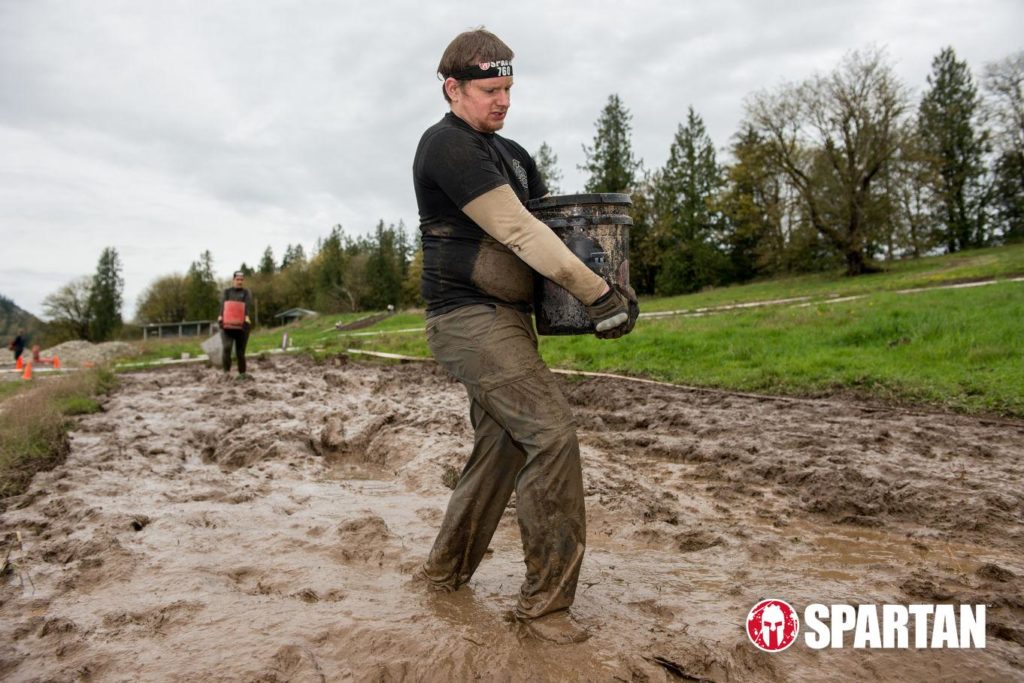 The newly sealed Bucket Carry was also pretty brutal as I’ll admit I typically leave about an inch or so of space when I fill it up just because I’m a wuss. But, not this time! It started to rain a little heavier & that sure didn’t help me with my normally non-existent grip. But, I remembered what someone else wrote & also saw others doing, flip the bucket upside down & use the edge of the top to hold onto. Genius! I ended up carrying it like that until about 3/4’s of the way through where I started to hold it sideways & ended up having to put it down more than I’d hoped. I got through it though, even though they had us go up, down & back up & down the hill again. Hello, lower back & forearms!

Seeing the Fire Jump as we came down the last hill was a great feeling. I knew that I would actually finish my first of three Spartan Races this year to get my first pie piece for my Trifecta. The fire wasn’t exactly roaring, but I could smell the smoke & feel the heat right as soon as I got to the Multi-Rig. In the end, seeing we would have finished together if I hadn’t decided we should get individual Fire Jump photos, I am stealing my Buddy Troy’s time as I let him go & jump across the fire first & he crossed the finish at 2:29:59. Just UNDER 2 & a half hours! I was quite happy with that! We managed to shave just over an hour off of our 4:40 time from last year which was a 16 Km (10 Mi) 21 obstacle course. 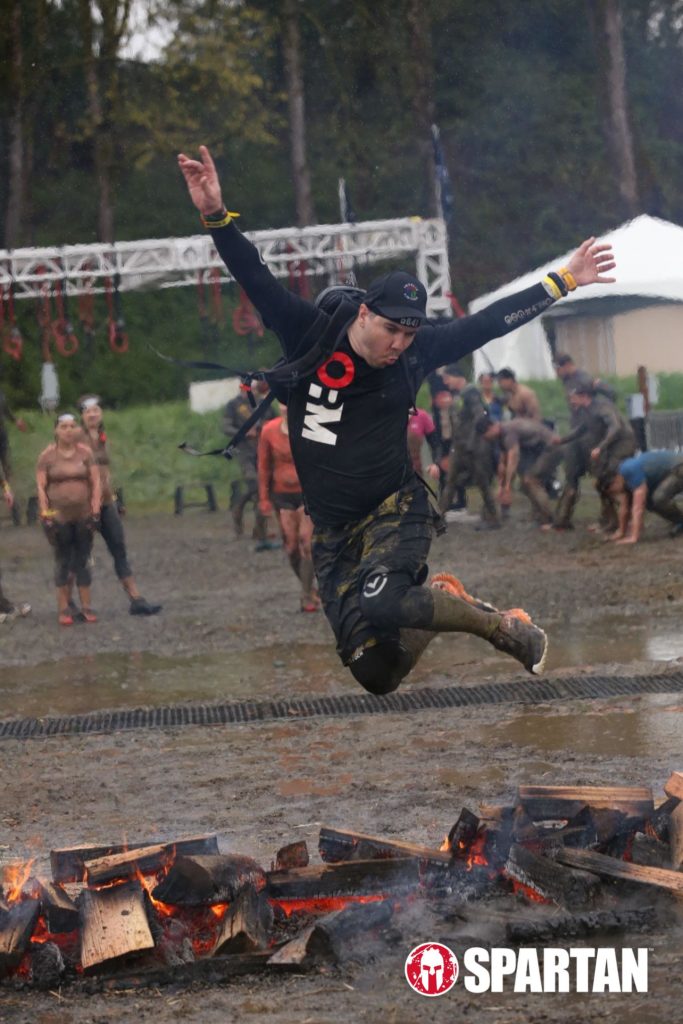 In Conclusion:
They can’t all be fun in the sun races, & this one left me wondering why I do this at the start. As I was walking up to the entrance I ended up bumping into someone that had recognized us from the Sun Peaks race last year. (http://obstacleracingmedia.com/race/spartan-review/spartan-beast-sun-peaks-2017/) He told me that he loved my Recap & forwarded it to others to read as a form of training for any others that may come. With that, getting up that darned Rope Climb & jumping that finishers fire, I remembered why I do this! To test & push myself. I may not be my own biggest fan, but having people cheering out on the course REALLY helps! Next time you’re out there, scream, holler, & shout encouragements to the racers because it DOES make a difference.

Wrap Up:
The Race was great after you got over all of the rain & the mud. The Festival area was quite well organized. Even though I was in & out quite quickly. I remember there being sufficient restrooms outside & inside the festival area. There was also a lot of vendors that I just didn’t end up paying much attention to. If I do come back next year, I really hope the rain lets us be for once.

PS:
I’ve mentioned last years race quite a bit in this article. Feel free to go check it out here http://obstacleracingmedia.com/race/spartan-seattle-super-emerald-city-open-2017/

All photos are credited to Spartan 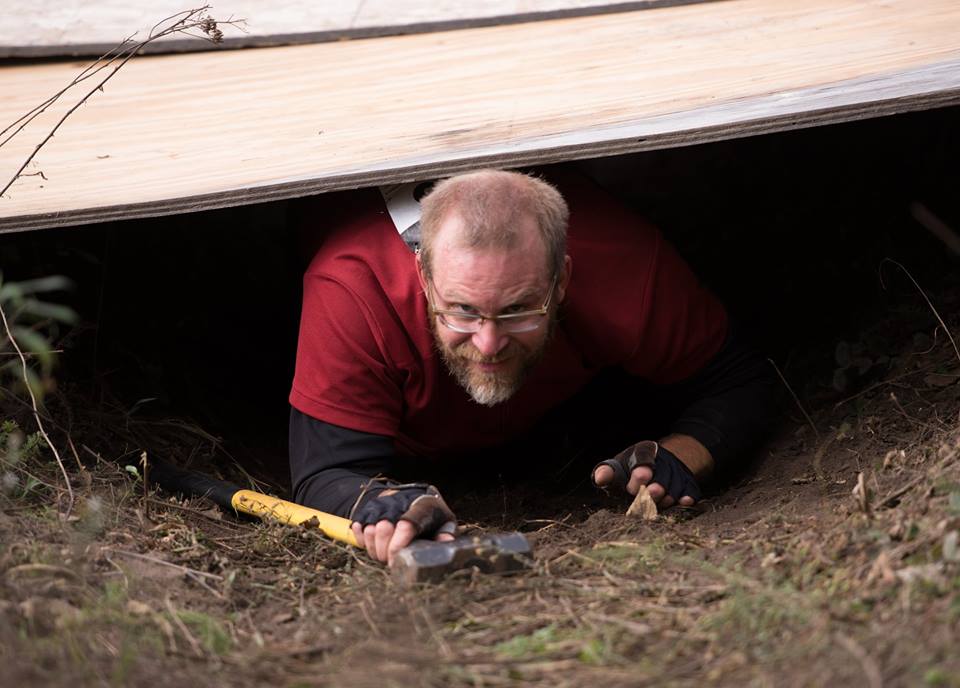 Have you ever wanted a break from the normal OCR thing of monkey bars and fire jumping? If… 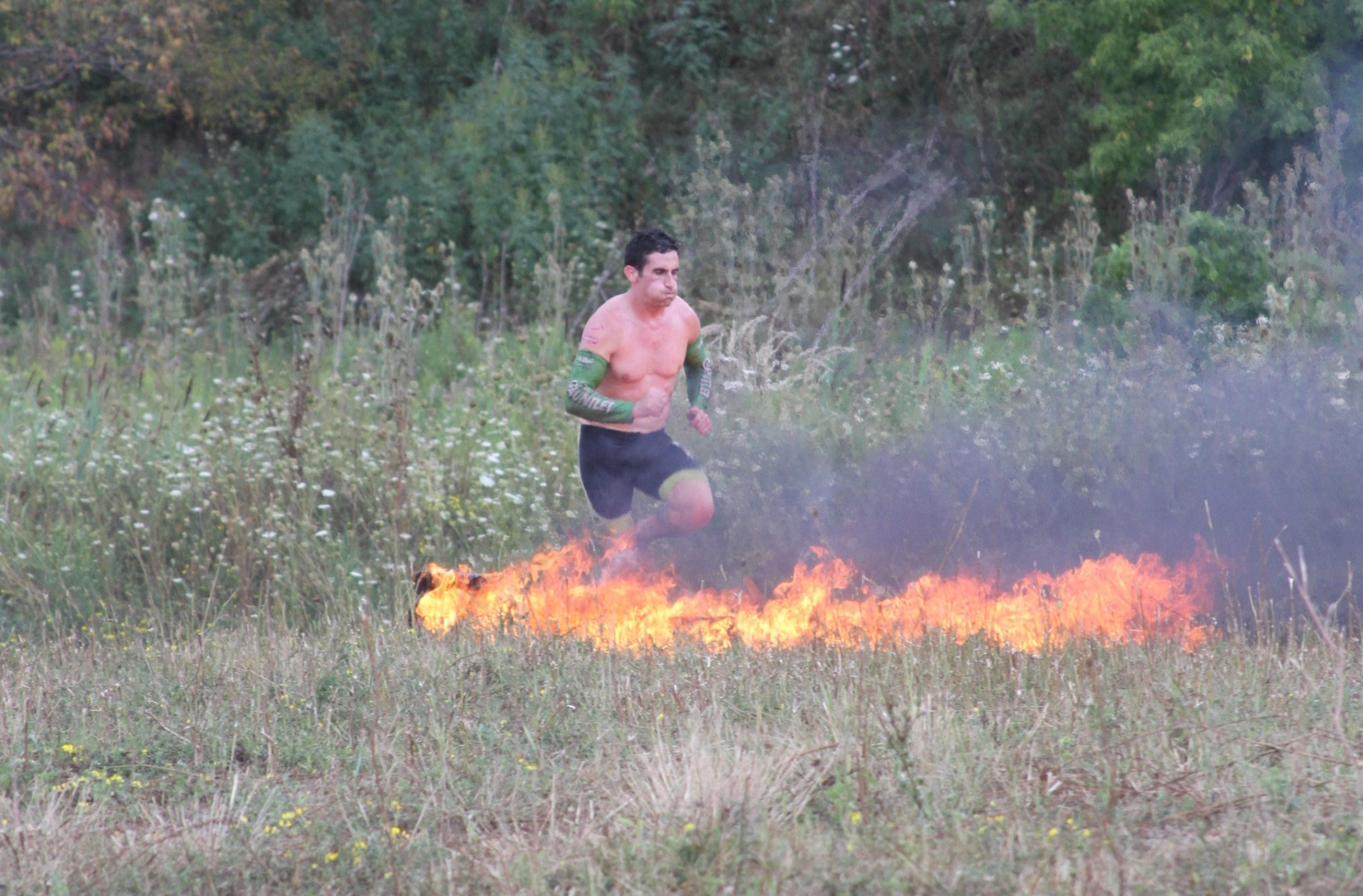 I personally specialize in ultra-Obstacle Course Racing (OCR), things like the ~8 hour BattleFrog Xtreme or the 24… 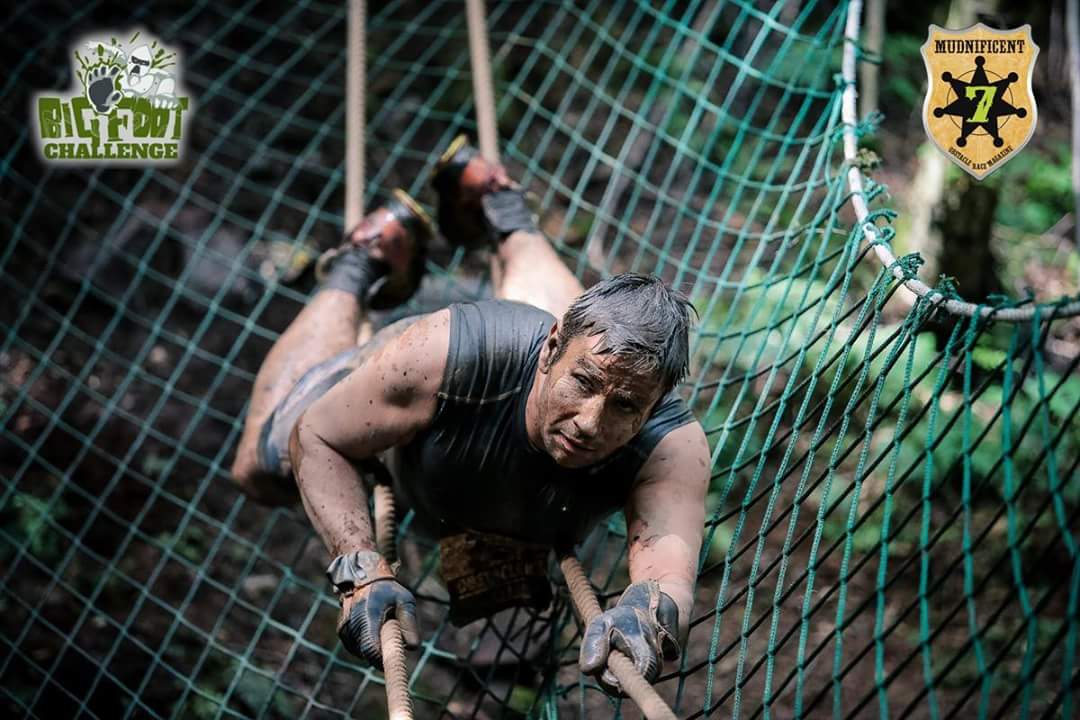 Within the OCR community there are a few rare things, as rare as a real life Jurassic Park… 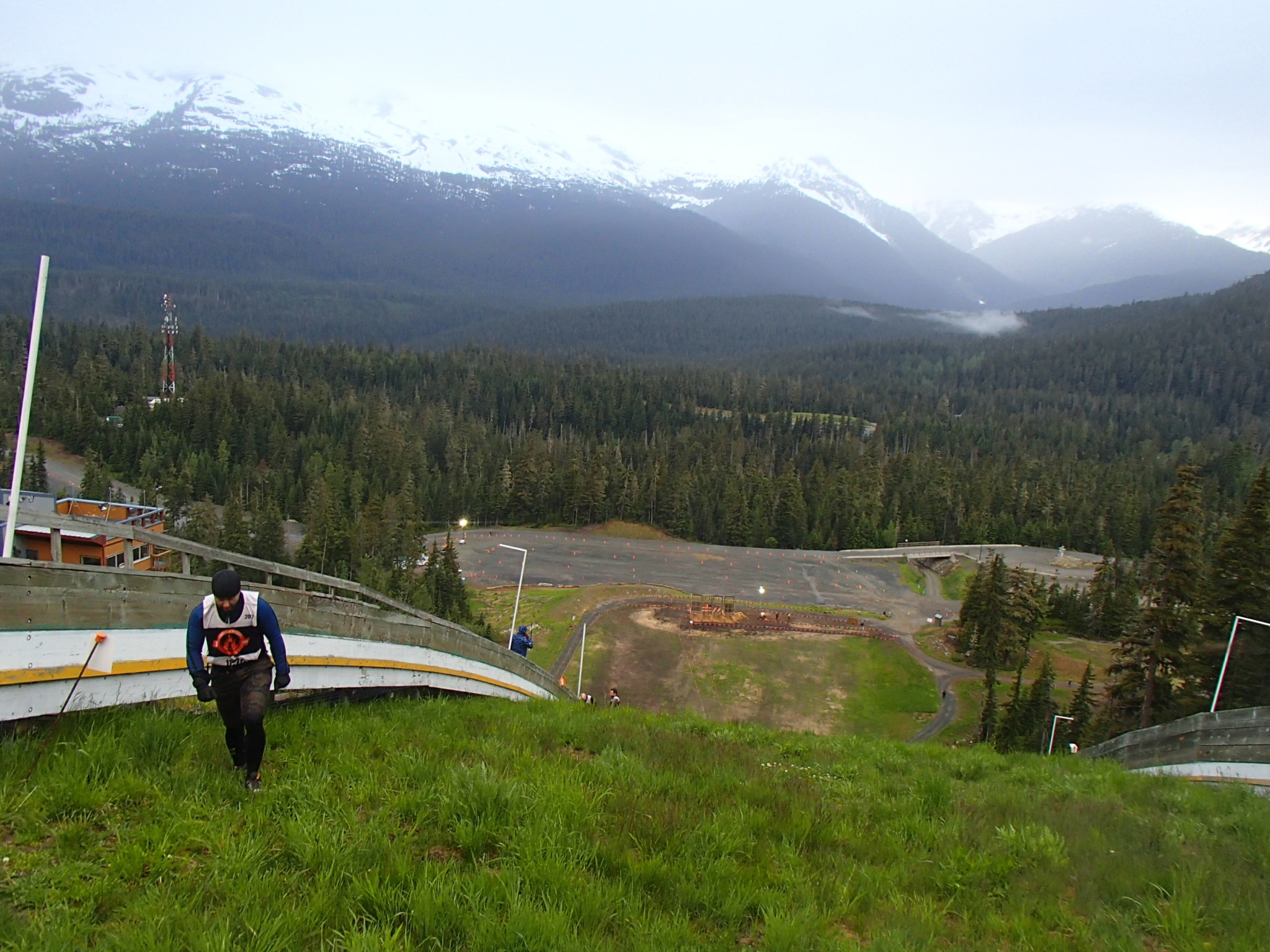