The Spartan Race Beast Seattle (Snohomish) was held at Meadow Wood Equestrian Center, in Monroe, WA. It rained non-stop for several days before the race, making the mud a “beast” of an obstacle all on its own.  The course is relatively flat, with some rolling hills and a couple of pretty steep ones thrown in for good measure.  I arrived at 6:30am and it was still dark. You entered the festival area under the A-frame cargo net which made me smile and get excited for the adventure that was ahead. when the sun rose it revealed this beautiful fall landscape: 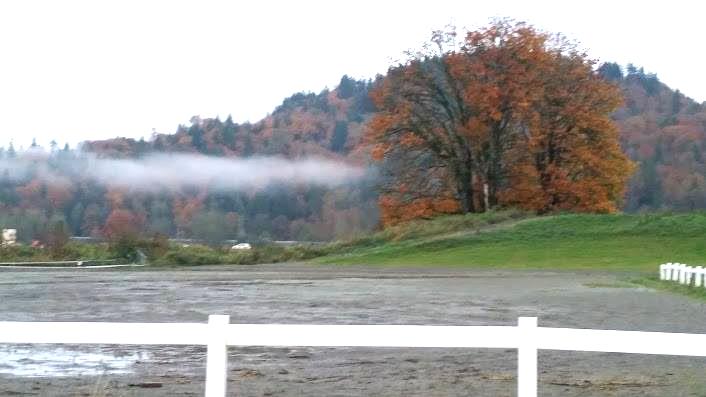 Me and my “mud buddy”, Chris, ran the 9:30am open heat with our team “Beasts OCR”. The team’s battle cry is “HOW DEEP”. We could hear it throughout the course all day long.  Just love it! The requisite battle cry reponse?…….. “BALLS DEEP”, as loud as you can.  It’s fun and it’s great knowing your friends are all around you. 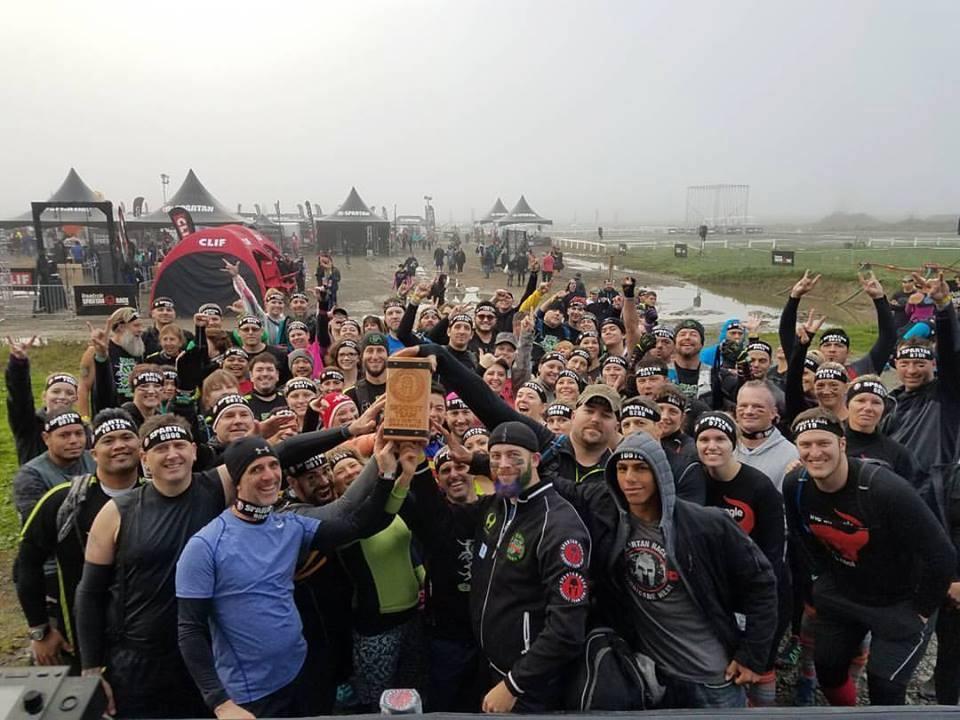 The course began with a very muddy hill through the forest. A low crawl was the first obstacle we reached. Under and through and we continued until we reached the first sandbag carry. The races always seem to have a “specialty” or theme. I think this one was two of everything! Two sandbag carries, two bucket carries, two+ barbed wire crawls.

The first bucket carry was a fairly short loop with a bit of a hill but a good obstacle to make some time on. 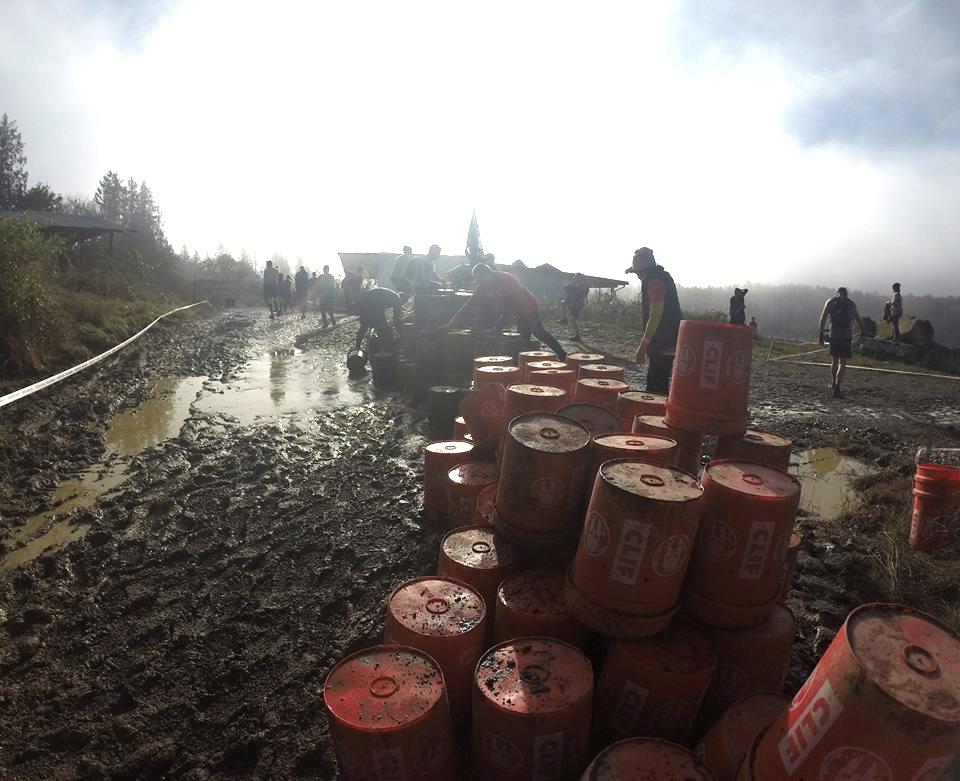 We wound our way down the rest of the trail and came to the rope climb. It was so slick and muddy that it was really difficult to get a grip on the rope. Hardest one I’ve done. I held on like a vice grip and made it to the top! 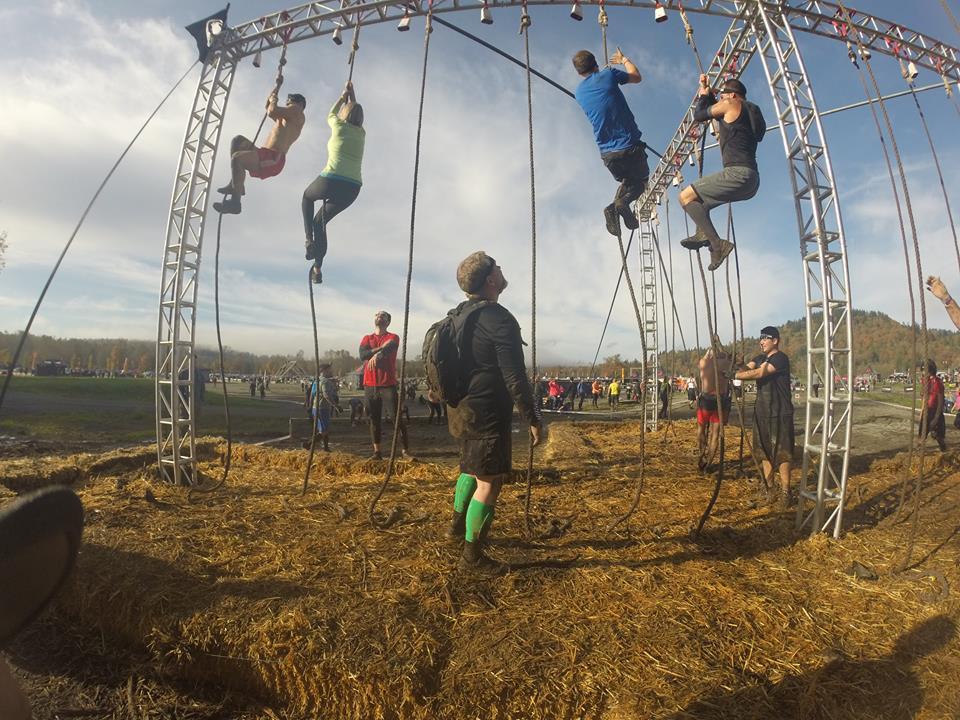 Just when you think you have a breather….the Multi Rig shows up! Our very own “Beast Elite”, Steven P. Hammond crossed it fast, making it cleanly to the other side. The Olympus followed (shown in the background). It was the first time I’ve seen this obstacle and it was definitely a challenge that I enjoyed. I watched, as people used different methods to traverse it. The wall was angled and had chains, rock climbing holds, and holes. You weren’t allowed to touch your feet to the ground or put them on the holds. I saw a few people make it by wedging their knees on the wall and making their way across. The mud made it very slippery if you tried to use your feet. 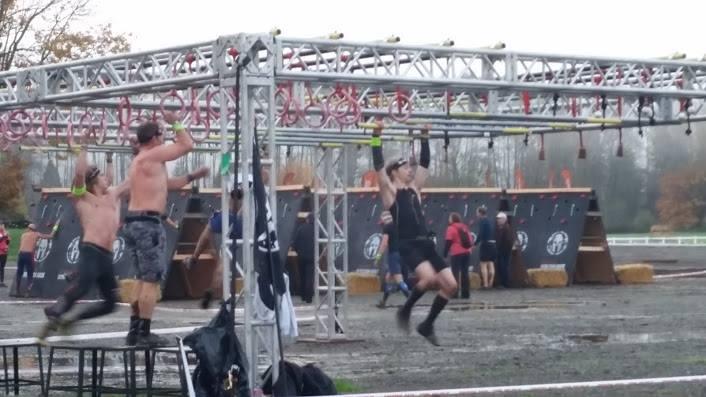 The spear throw came and went with a pile of burpees. Next, came the monkey bars. It’s so wet in Seattle that they set it up in a barn. Brilliant! Made it across and continued to the back of the course. 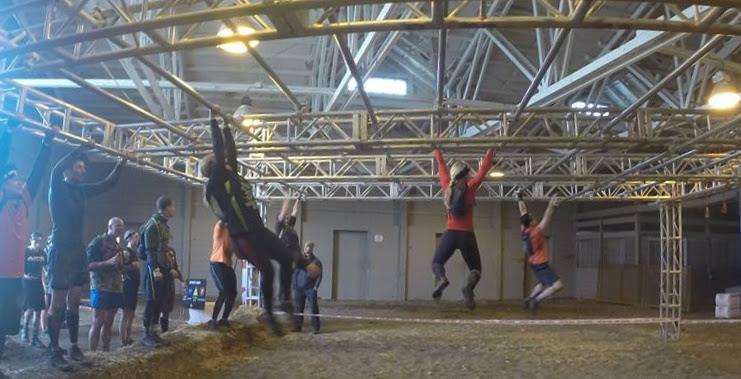 The next portion of the course consisted of mud, mud, water bogs, and more mud and continued for about a mile. It felt more like 5 miles as it was very slow going. The mud wanted to take your shoe off with every step and the water bogs had logs, holes, and vegetation, making it quite the challenge. I came out with a tail, AKA blackberry vine attached to my pants! 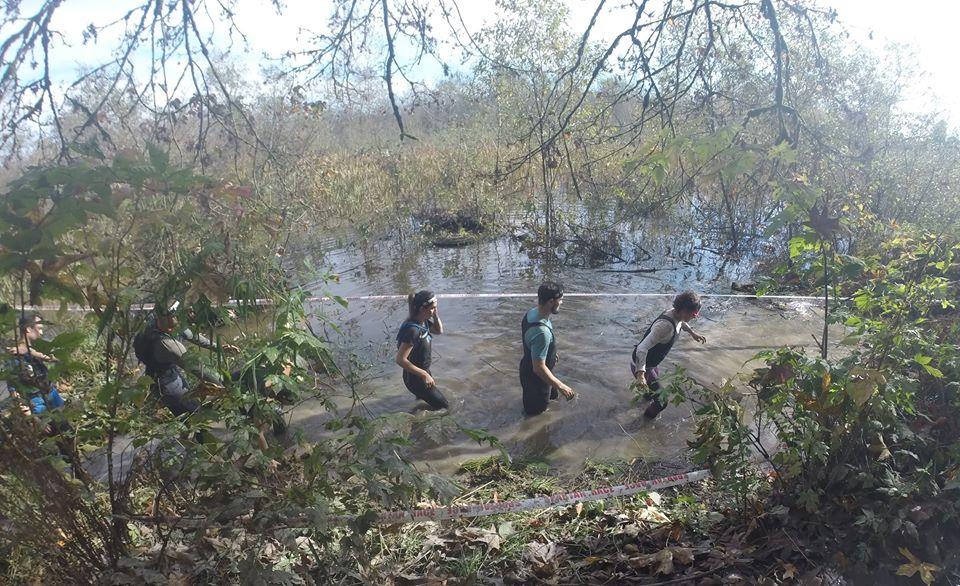 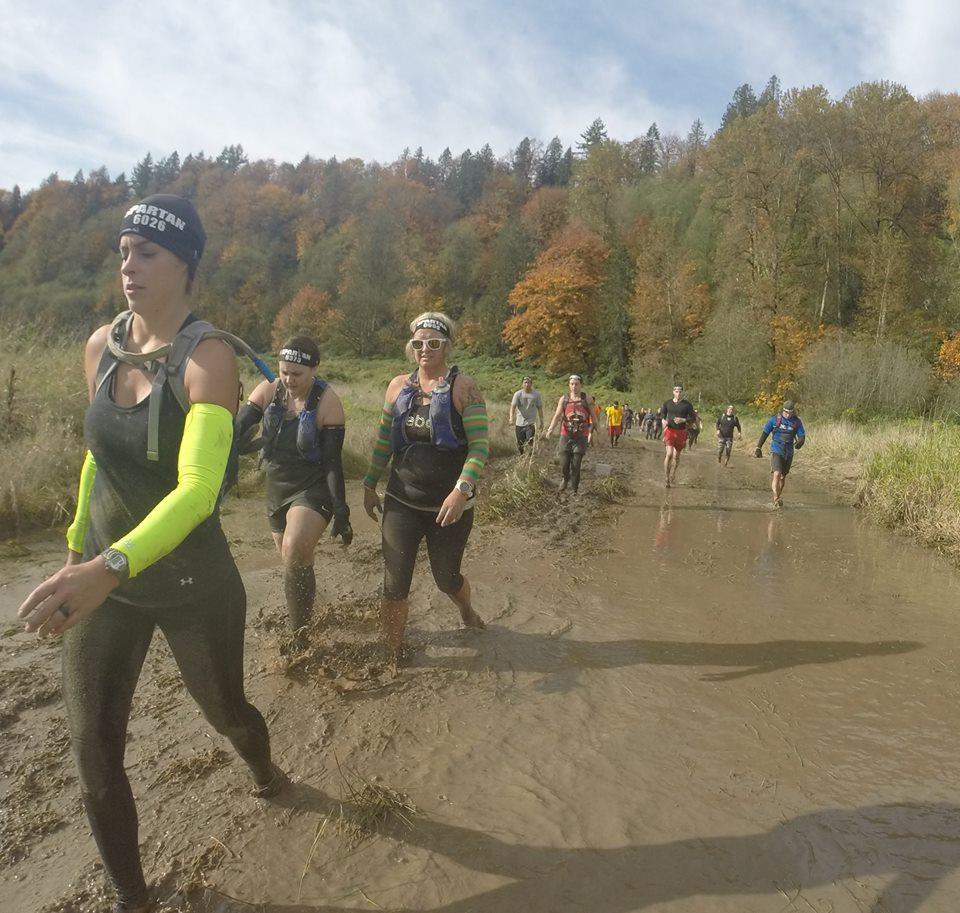 Next, came several obstacles in a row including the 7’ wall, plate drag, stairway, and the second bucket brigade, which was quite forgiving. It was a larger loop than the first, but flat. 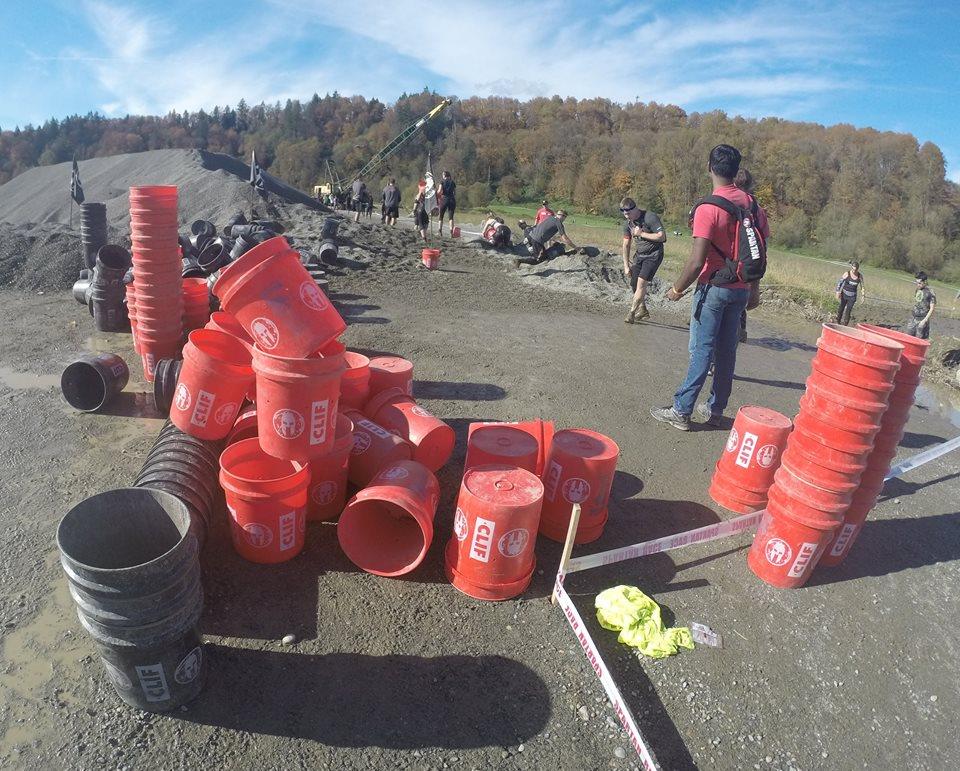 We crossed the field and reached the Tyro. Love this one!  It was interesting that the bell looked so close when I started but it seemed like it was getting further away as I was making my way towards it. Finally got there and rang the heck out of it!

Made our way back through the mud and water bogs and followed the river for a nice jog to the farmer’s carry. It was really muddy so it was hard to get a foothold while carrying the heavy logs. Made it without incident and continued through the corn fields to the O-U-T.

The inverted wall felt so much harder this time. I was starting to get tired at this point and just couldn’t get my hand up and over the top. Got a little help from my friends and we all moved on to the 6’ wall. 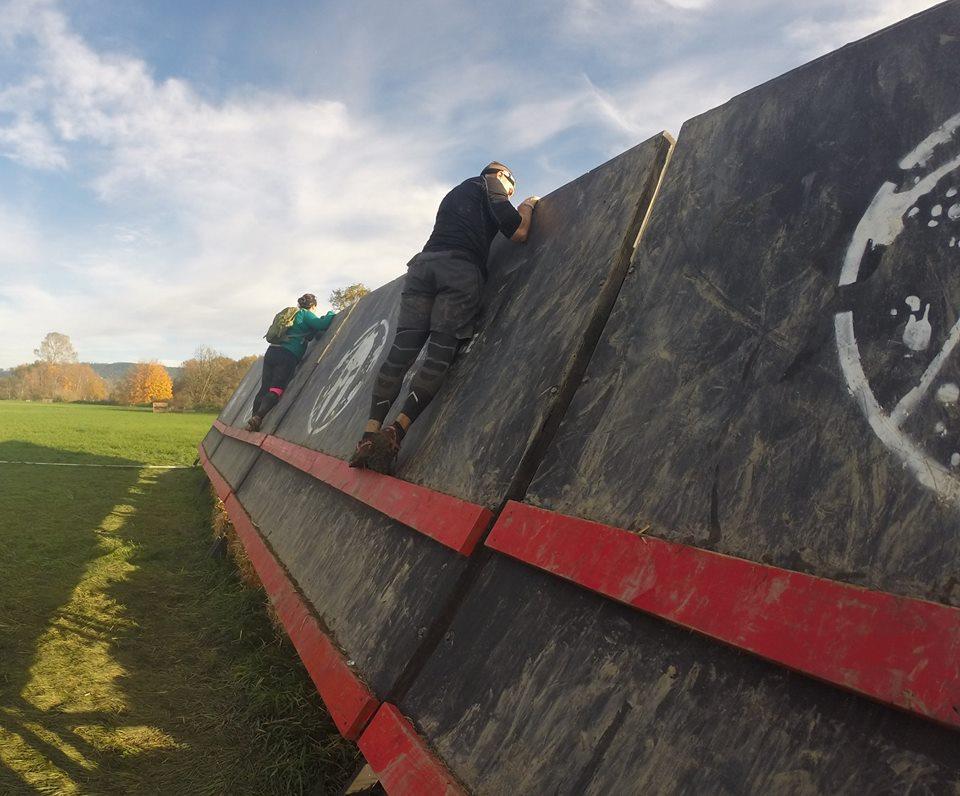 Next, we went over the A frame cargo net. Some of my friends have a fear of heights which has to be very difficult as this is no small net. I’m always so impressed when they get up and over and conquer that fear.  That’s a huge part of what Spartan Races are about to me. Putting yourself out there and doing something that you would never do in your regular life. You become stronger because of it and learn that you can do more than you ever imagined you could.

The Herc Hoist was next. Most of the bags were sitting in puddles, making them very heavy. The ropes dripped water as you hoisted them up. It was a struggle, but I got it up there, as did my Beast OCR friends. It would be getting dark soon, so we moved on to the last remaining obstacles. 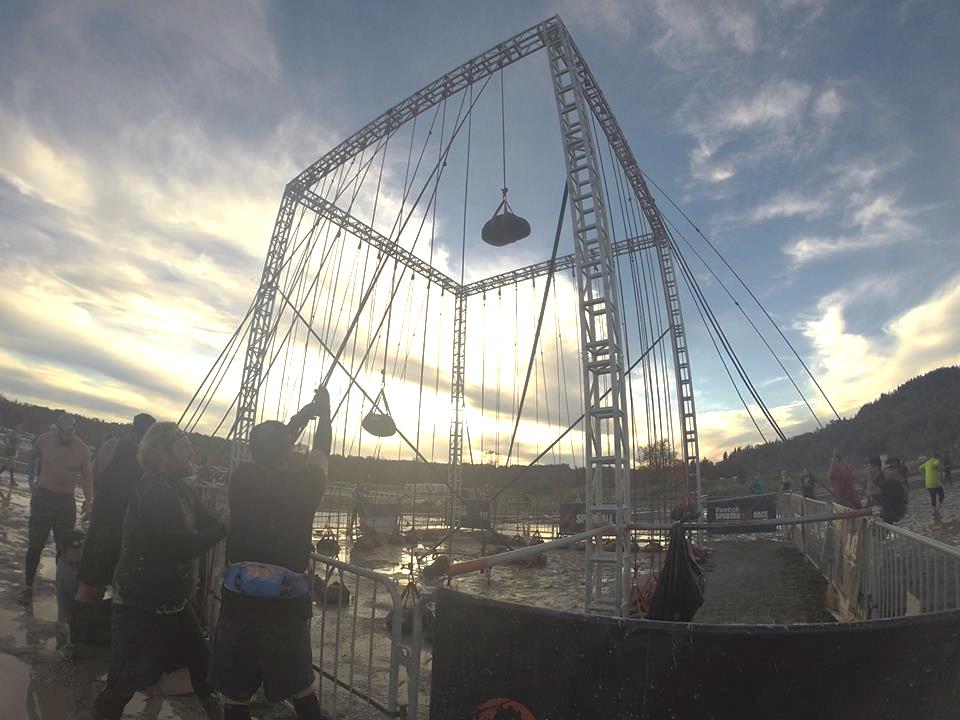 There was a fairly high barbed wire crawl with an over wall in the middle. Then, an Atlas carry which had a twist. Instead of the Atlas stones, we carried beefy logs to the flag, did five burpees, and returned them to their starting position. While this post is about the Beast, I felt I had to mention an amazing man, named Chuck who dominated this obstacle during the Sprint on Sunday. Pretty darn impressive considering he is 83 years young! I wondered if there might be reason for concern. After hearing he was a marathon runner, ran 80 miles on his 80th birthday (in under 25 hours), and performs in Masters track and field events, including pole vaulting, it seemed pretty obvious that the only concern would be keeping up with him! He took on the challenge and completed it like a true Spartan! Aroo! Aroo! Aroo! 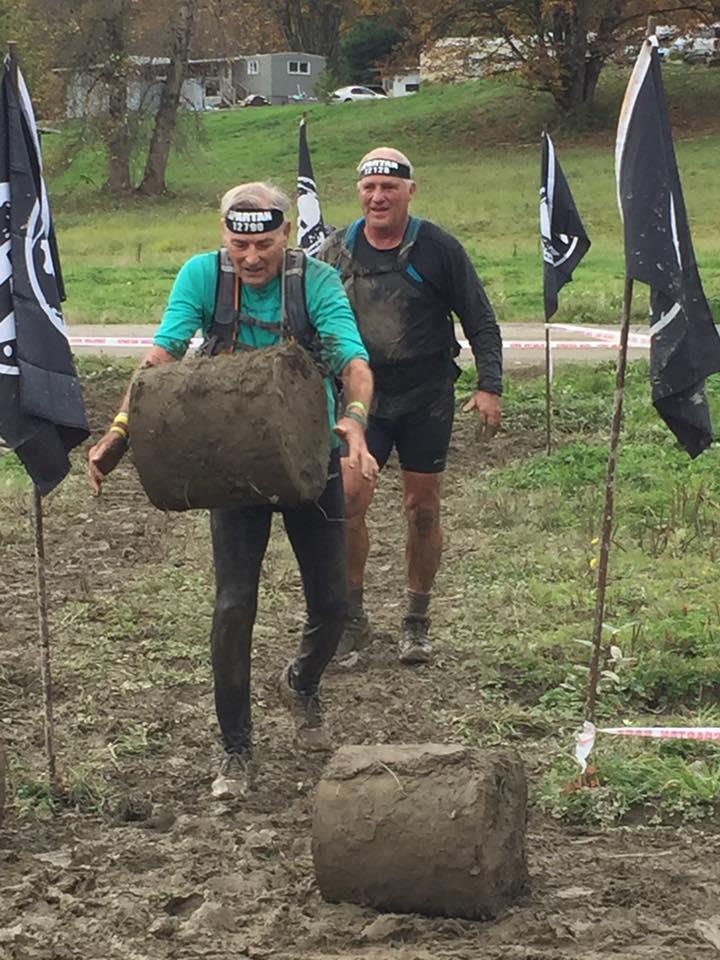 There was one last mud/water bog and then, instead of a dunk wall, we had a floating barbed wire crawl. It had a couple of feet of water with some holes to throw you off. Once you got to the wire it was too low to crawl so you had to get in the freezing cold water and float. The easiest way was to pull yourself along with your hands on the bottom. There were a couple of times I couldn’t touch the bottom so I used my momentum to float through, channeling my inner alligator, until I could reach the bottom again. There was a lot of grass and it felt very swampy. At the end, I came up looking like a lagoon creature with vegetation hanging from my clothes and hair. 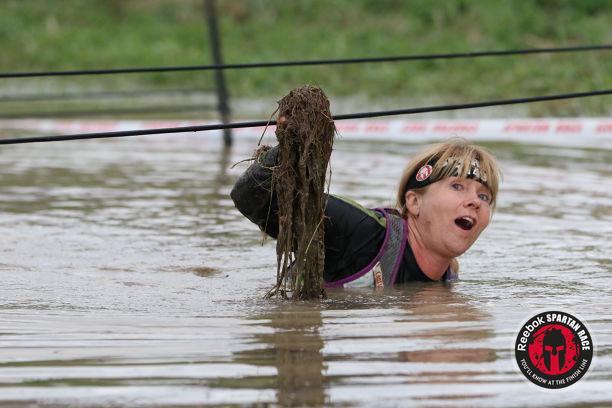 The slip wall was the only thing standing between us and the finish! We didn’t know if we were too tired to make it, but soon we were up, over, and on the other side. We were running for the fire jump when we saw the big patch of mud in front of it.  I had visions of slipping and going face first into the ashes… ”Do not fall in the fire…do not fall in the fire”. We reached the flames, jumped high and made it without incident. 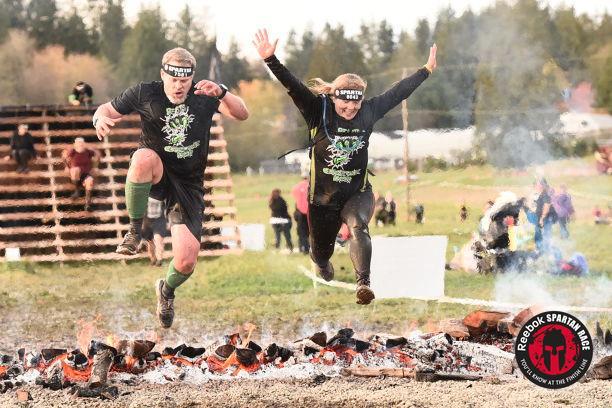 They put the medals around our necks and it was time to celebrate! We conquered the Beast!! 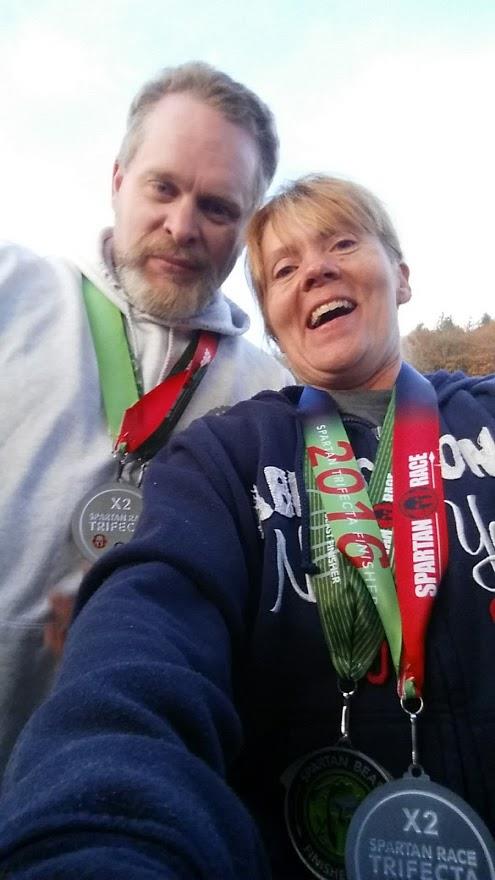 I’m really excited that Spartan has provided all three races in Washington state and it looks as though it’s on track for next year as well. Look out Beast 2017! 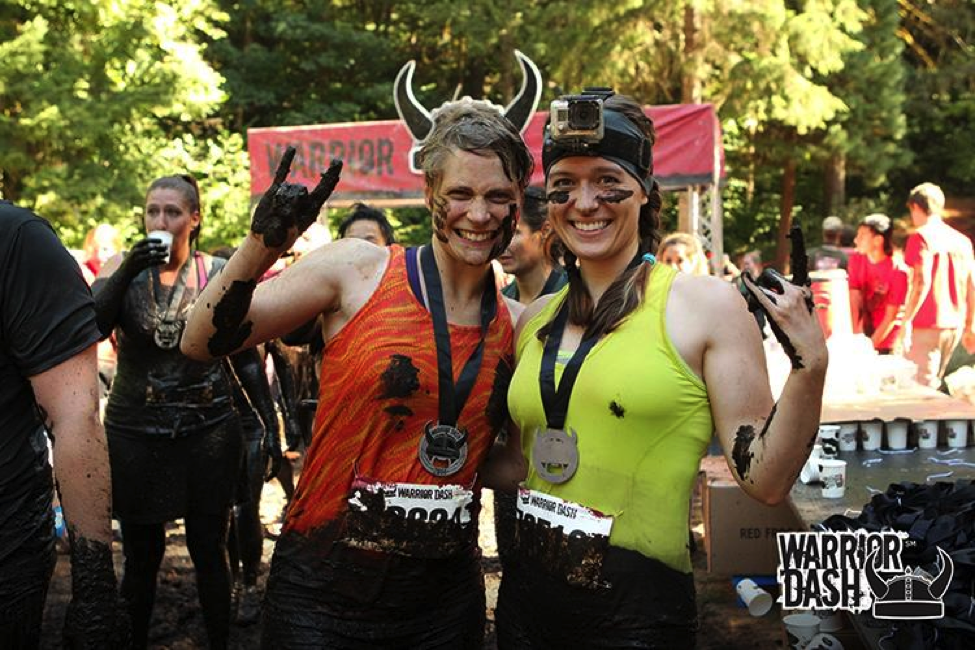 Warrior Dash is an easier mid-level mud run that is a staple in the OCR circuit. I put… 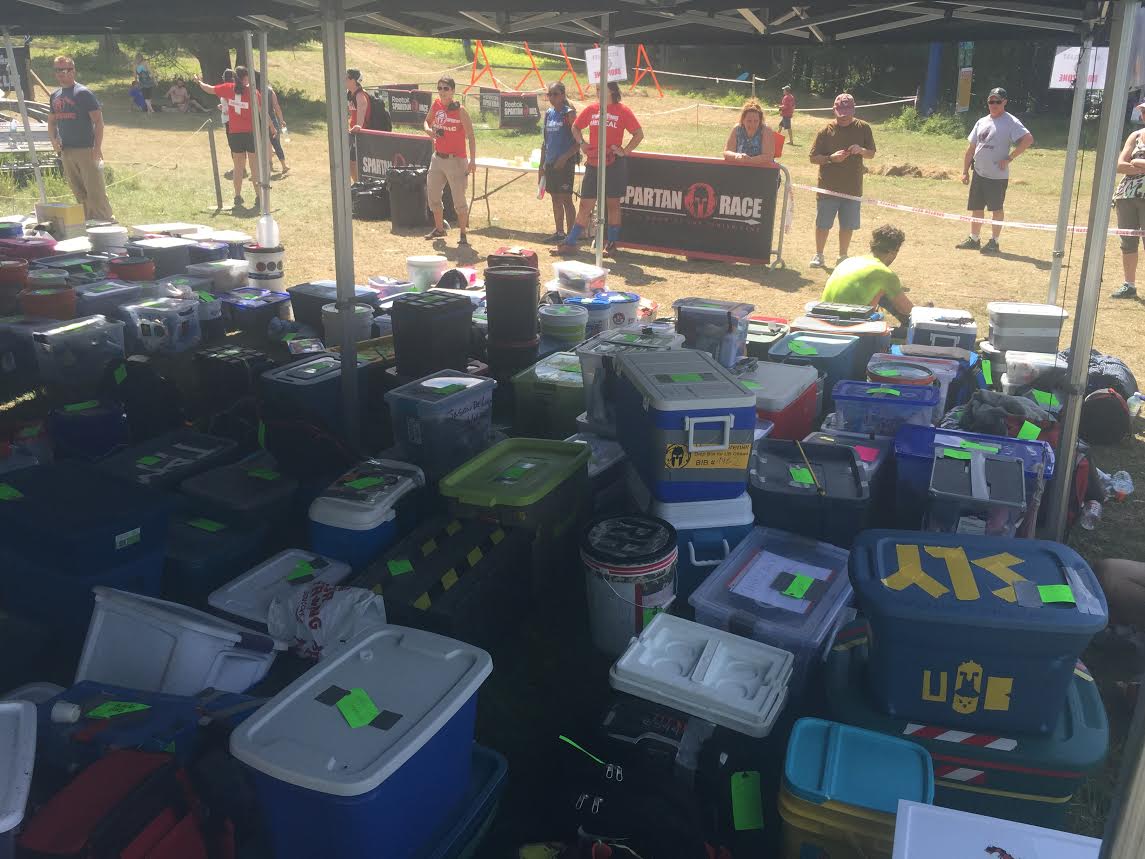 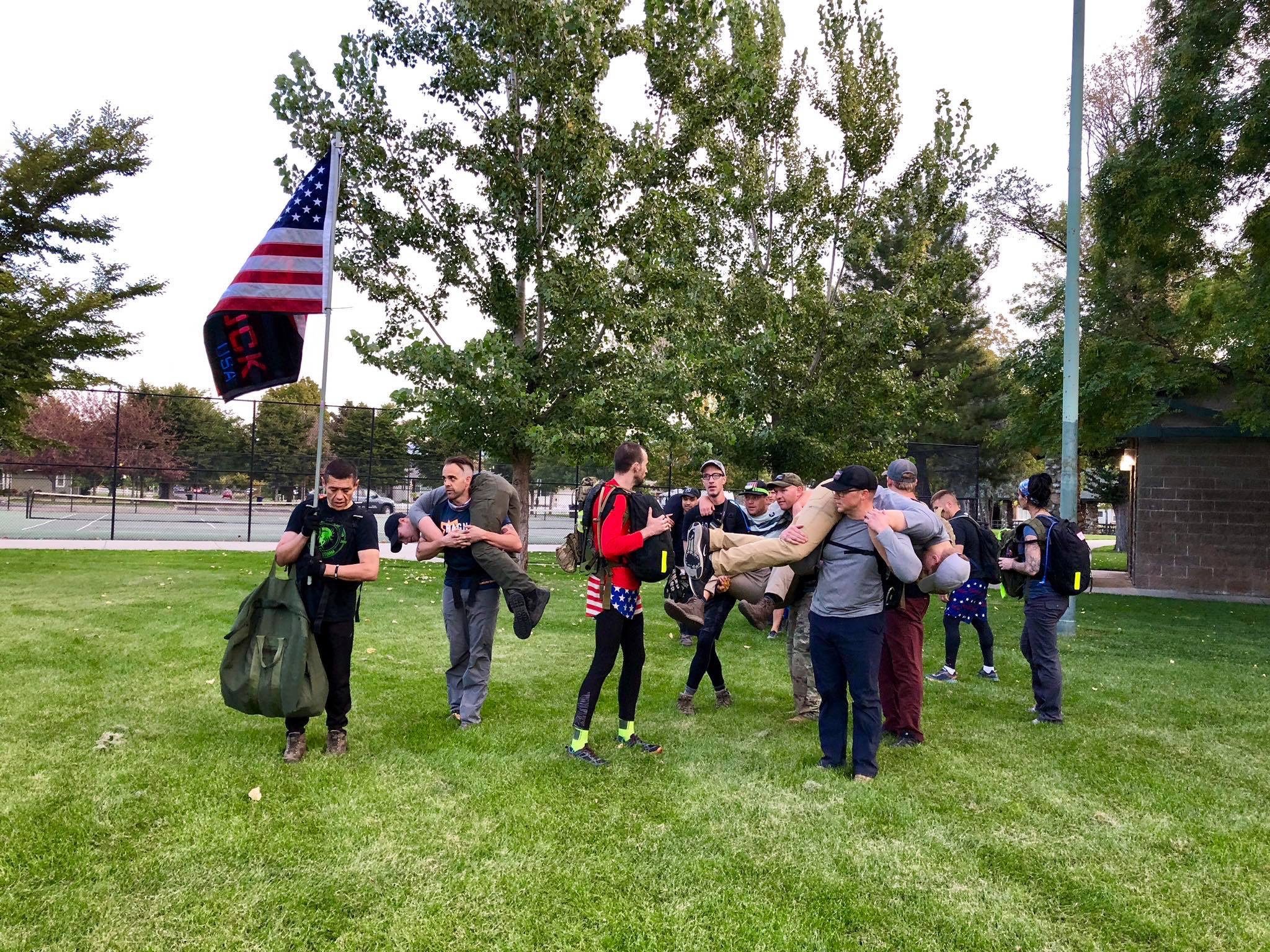