Following the departure last year of the Canadian Spartan franchise holders, the western Canadian Spartan Race series is now back in the hands of Spartan, Inc. Expectations were high that fresh ideas and fresh obstacles might make their way into the first Spartan Race event in Alberta this year. A new race director. The new build team. A new lease of life for Spartan in Canada it seems.

Almost equidistant between Calgary and Edmonton, Red Deer is in a perfect place for an event to draw obstacle racers from both major cities in Alberta, Canada.

Heritage Ranch itself is a venue with many different environments and surfaces. Mile after mile of forest singletrack means there is both the opportunity for fast paced trail running or an enjoyable adventure through the woods (whatever your style of participation is).

The winding forest climbs offer a moderately tough challenge – this is no ski hill by any stretch, but despite being touted as a race without much elevation gain, we tracked about 450 meters of elevation gain and loss on the course of the Super course, which is substantial given the topography. Bushwhacking and off trail running was featured heavily on both days, so caution was required to protect yourself from low hanging branches and less than obvious tripping hazards. Caution was also required to stay on course in the more forested areas (more on this later). The trail included some incredibly steep, rooty descents into the forest which sent some racers tumbling into each other – or possibly even holding hands for support. It was not for the faint of heart at times but offered plenty of technical challenge for racers who attacked it at speed. It was crazy in the best possible way.

While both races followed a similar set of obstacles, the Super on the Sunday took in a more expansive area of the park, including some extra trails to the north, which followed the river and crossing some wide open pasture (which seemed to be mainly populated by thistles – so bring long socks if that happens again). A small amount of the course was on paved surfaces and well-maintained unpaved trails. There was a water crossing, which involved a swim or racers could pull themselves along a rope barrier, and a few boggy areas along the northernmost edge of the park where the Super course crossed small ponds and gullies created by the river. The sandbag carry also took place near water, with participants carrying a sandbag down a steep riverbank and across a short section of the riverbed and under a bridge, before climbing a dodgy but fun stack of boulders at the base of the bridge and back up to the start of the sandbag loop. There was little in the way of mud on either course, but as ever, specialist OCR or trail running shoes are essential for this race and all other obstacle course races. Drainage is essential. Take your pick.

Pro-tip. Save some gas in the tank for the steep wooden staircase near the final obstacle run. I’ve asked a few members of Team Rampage Racing for their thoughts on the course.

On the spectator experience… “It was epic coming to the cargo net and hear people going nuts in the spectator area, I even heard a couple of people screaming my name. I was pretty sad with Spartan before this weekend, but Ven Hodges helped make this an epic course!”

The wide festival area and expansive viewing area was a huge win for Spartan Canada. It made it much easier than ever before to actually see the thrilling battles taking place on the elite and competitive heats as racers sped across a vertical climb, rolling mud, and the Hercules Hoist before disappearing into the forest again. Minutes later they would re-emerge back into the arena area so spectators could easily see and cheer on racers tackling the Z-Wall, the Platinum Rig, and the Spear Throw.

There were extended sections of pure running in this race. Some people found that they might have preferred the obstacles to be more equally spaced.

“Overall it was something new to western Canada. But I would have preferred to have less of a runner’s course.” Others felt a similar way about the balance between running and obstacles, particularly on the Super course. It seemed that obstacles only seemed to happen in clusters. “I really enjoyed it. I’m glad they used the terrain better. It felt like they really took advantage of the trails out here, although it was a little frustrating how long it took to get to the next cluster of obstacles. Granted that’s a selfish frustration because it’s just not as good for my own strengths. I loved the use of the river again, the sandbag through the river and up the rocks felt gritty like a battle-frog race, and the Tyrolean Traverse was cool. However, the strength based obstacles like the Herc Hoist, bucket carry, sandbag and baby tires were either way too light or too short. The obstacle clusters were fun having a few gooders in a row, and this was a much better spectator experience this time with high profile obstacles near the festival area and a clean, dry festival area! Overall I really enjoyed it!”

Others were quite happy with the setup. “I found the race to be a great balance between a runners/strength course. It was rare to see any obstacle that was stand alone (they were often stacked together) so it forced the runners to step up their obstacle game, but the long stretches of flat running balanced that out. The mad dash to the single track at the start was a blast! And coming near the festival area for obstacles was a great motivator.”

Indeed, the first 400m of the race really determined the first 2 kilometers of the outcome of the race for the competitive heats. After starting on a wide field, the course quickly turned into a single track trail where it was impossible to pass slower runners ahead. This encouraged competitive and elite racers to find the right position quickly. “Getting to the trees first (or among the first) definitely dictated how the next 1/4 of the race would go and if you got caught behind anyone that didn’t have the same objective as you… It was frustrating…but I think it was great. Made you fight for it. I loved the clusters of obstacles. as much as I hated that rig on Sprint day… That set up of Rig/Spear changed who was where in the race. Both days. That was cool.”

For the open heats, bottlenecking on these trails became a bit of an issue in this area and at obstacles like the Tyrolean Traverse. However, the strategic placement of obstacles definitely made a difference for those who are more strength based athletes to shine. While less competitive runners would find a great challenge in facing obstacles in sequence. It was really a great setup for all. The Sprint course turned out to be about 6.8 kilometers in distance (longer than a typical Canadian 5K Sprint). The Super clocked in at about 11.2K which is shorter than the typical 13-kilometer course we have seen at Red Deer before.

Important note: Course marking…. More than one competitor in the Elite Sprint Heat found themselves running the wrong direction, missing a critical turn down a steep hill. They ended up finishing way too early or otherwise confused and lost. this might be due to the speed at which competition is taking place, but also partly due to the winding, off-trail nature of the course. The course organizers took note of this and re-marked some areas of the course. All athletes conducted themselves in a professional and fair manner regarding the course marking debacle. Oh, and the volunteers were awesome! 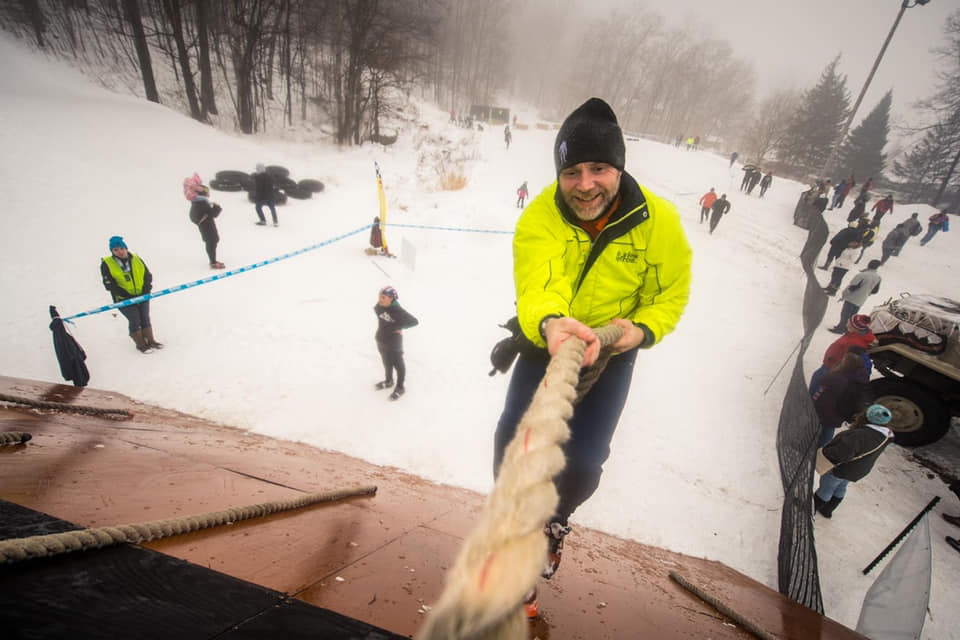 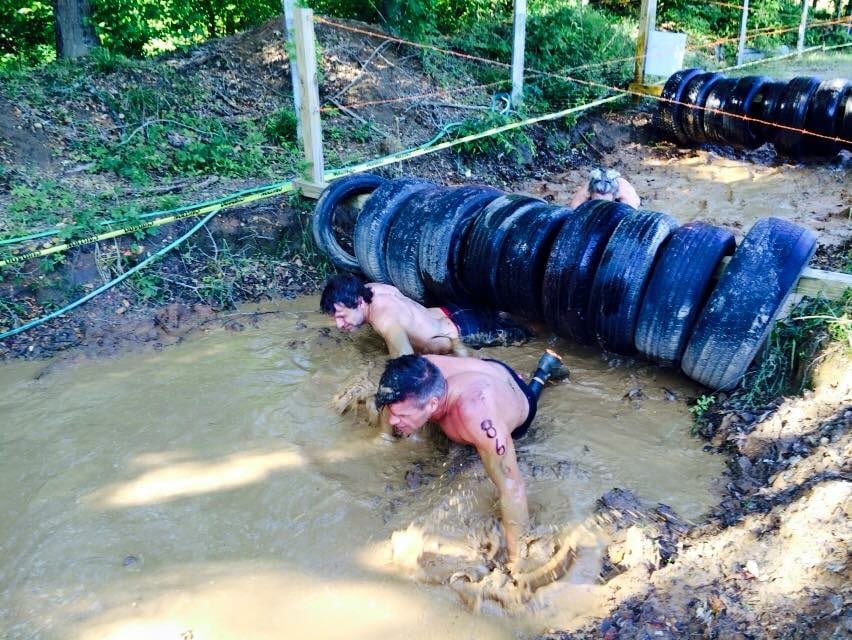 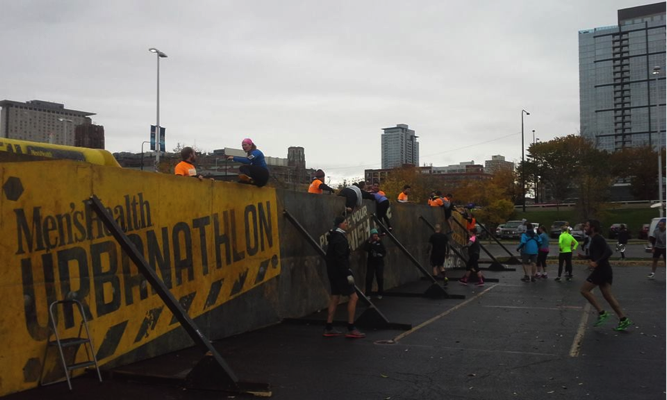 In 2006, before many races we see on the scene today existed, Men’s Health started the Men’s Health…