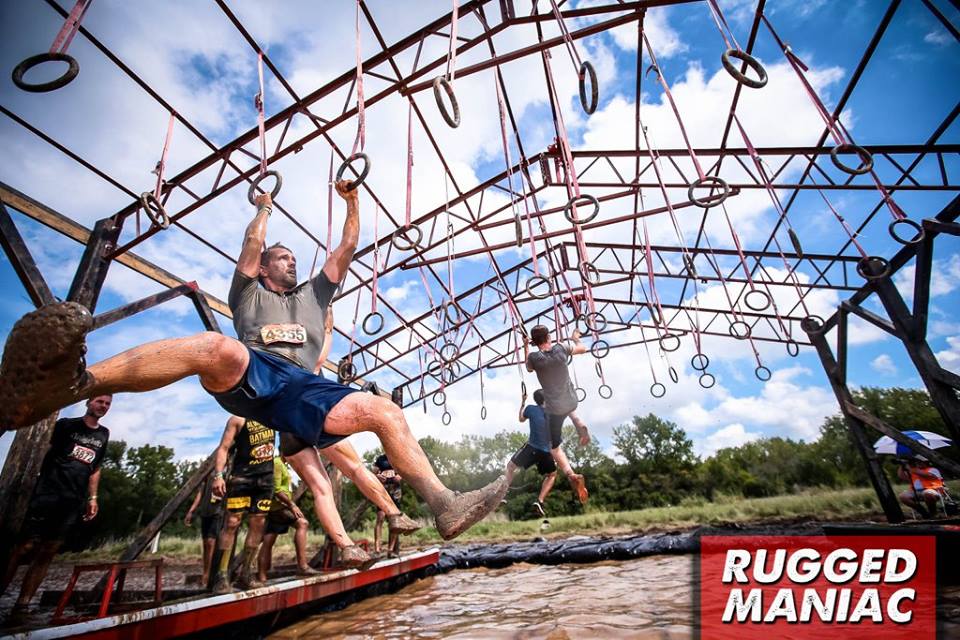 The 2016 Chicago/Milwaukee Rugged Maniac was held August 27th at CPX Sports near Joliet Illinois. The venue was a change up from the old location of Wilmot Mountain Ski resort in Wisconsin. Yes, gone were the steep hill climbs as they were now replaced by trails set between different paintball areas of CPX. Advertised as a 5k course, the distance came up as 2.82 miles with almost no elevation change by my GPS watch. The event was a tad bit hard to find and brutal to get out of with long lines of traffic. Once there, 10 bucks got you onsite parking right next to the event. The first wave, and only timed heat, started at 9:45 and the volunteers checking you in were very strict about not signing anyone in until 9 am. This was super frustrating to those of us waiting in the rain. The volunteers were ready by 8:45 but just sat there for the next 15 minutes. Once checked in, timed runners were given a take home timing chip, and after reviewing the results they might want to use a different timing system. At least half of the racers times were either wrong or not listed causing great frustration. 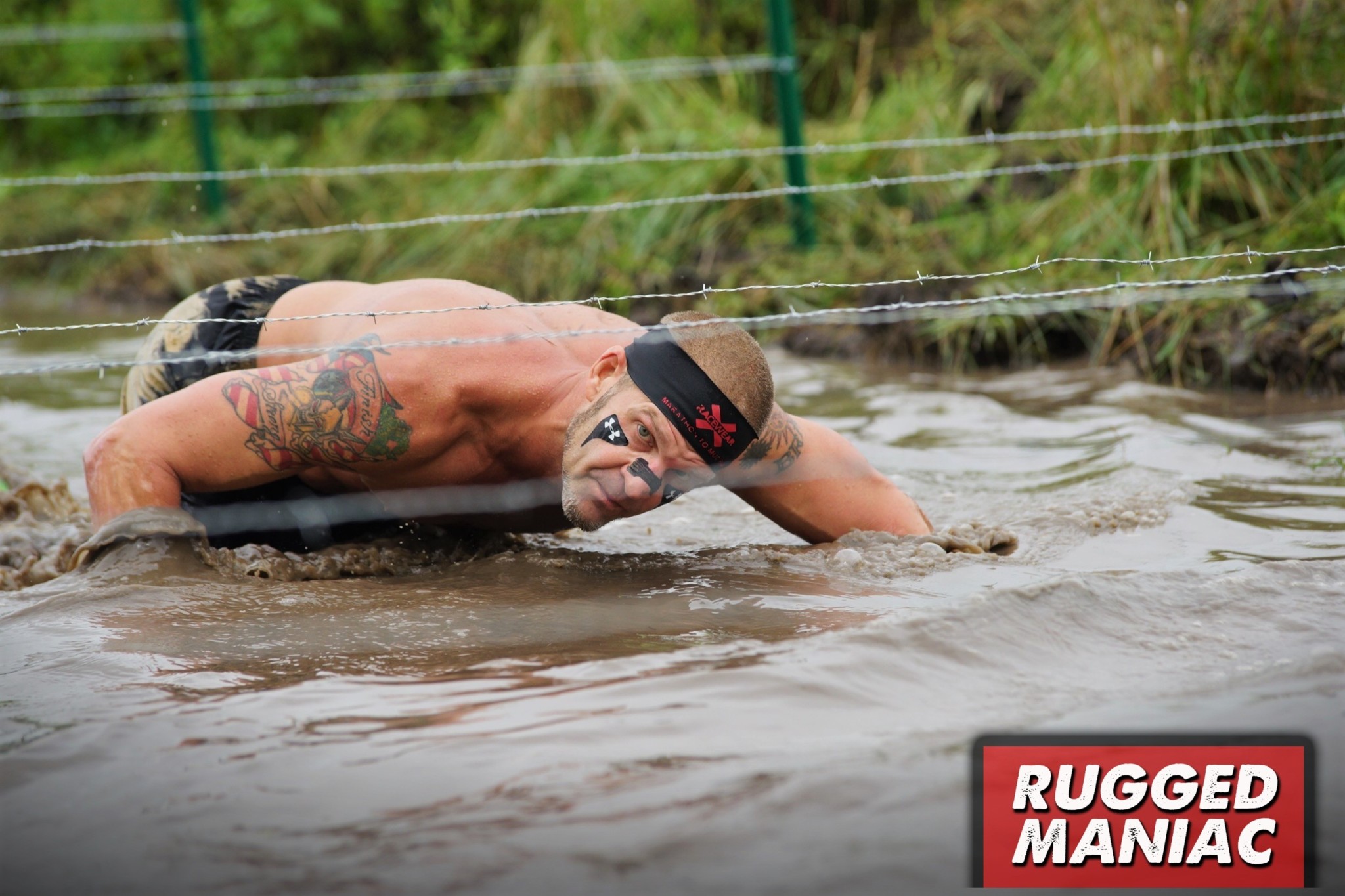 So on to the actual race. The rain leading up to, and during the race made for a sloppy run around the cleared trails. Rugged had us start out with a half mile run through the slop leading us up to a wall to climb over with a padded bar on top called the Barricades before throwing us back on the muddy path towards the shoe catcher {muddy pond) and the trenches. These required an athlete to jump over dug out areas in the ground, one slip and down you went. After a short jog, Beam Me Up was the next obstacle. This was just your basic large wooden ladder you see at a lot of events. Next up were the quad burners, muddy pits with a mountain of dirt to climb out of. I found that Rugged liked to put one of these after a lot of obstacles to kind of ramp up the difficulty. Bang the Gong was the next unique obstacle up for runners. An athlete had to jump into a water pit and smack a metal plate suspended over the pit before moving on to Claustrophobia. This obstacle was a series of covered tunnels that required you to navigate your way through and out of. 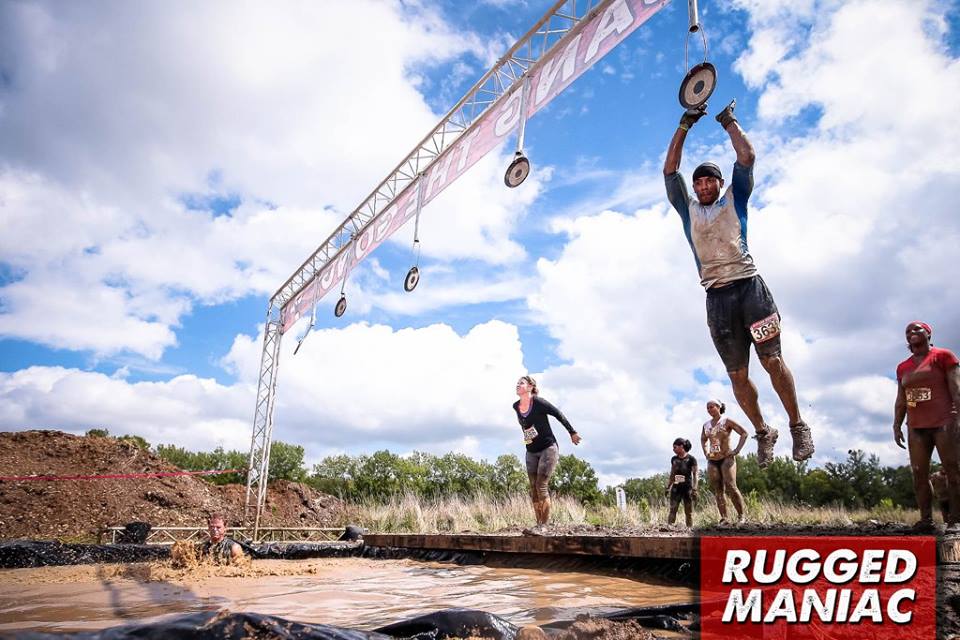 Now onto the back part of the course; the obstacles came so quickly you could see the next one up in front of you right after you finished one. We started this section with the Pack Mule, a short jog with a wreck bag on your shoulder and over another wooden ladder. The Ninja Escape was next up and the obstacle consisted of a set of teeter totter boards one had to traverse followed up by a set of angled boards called the tipping point where one had to run through very much like the beginning “floating steps” of American Ninja Warrior. Following that obstacle was a very cool set of rings suspended over water and Rugged was smart enough to place a photographer there which sure made for some outstanding shots! After crossing over another large mud mound and rounding a bend sending us back to the festival area, we had to climb up an over the inflatable Blobscicle and jump over the ever popular fire pit. Anti-gravity was a Rugged unique obstacle where an athlete had to use a trampoline to vault oneself up to a cargo net strapped onto an inflatable and was a total blast to complete.

With the end in sight, Rugged threw some of their more popular obstacles at us. The Frog Hop was a series of large jugs tied together over another water pit. One slip and in the drink you went! Another water obstacle, the Gauntlet, placed you over a pit of water on a series of foam mats while you dodged large padded balls that were seriously bent on knocking you off stride. The warped wall led athletes up and onto a cargo ladder called Mount Maniac! Let me tell you, if you missed that warped wall, the slide down tore up whatever skin you had exposed. The Accelerator, a large slide into a water pit was the last obstacle we encountered with a short jog to the finish line right after. 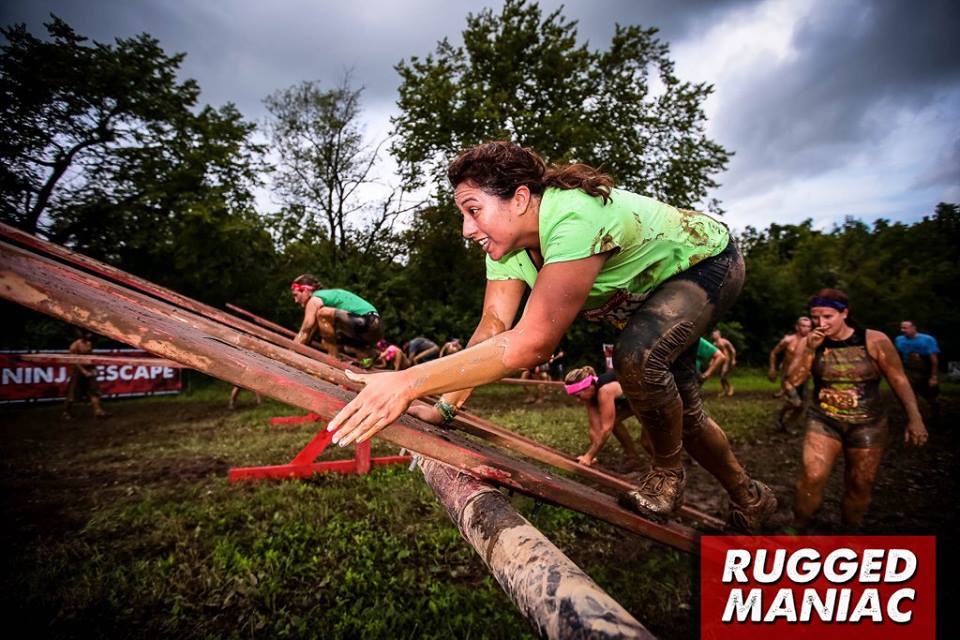 I found the Chicago Rugged Maniac to really be a lot of fun. It’s certainly a race most anyone could do, lots of mud and the obstacles were not super difficult. The short distance was ideal for first time racers. Maybe a multi-lap option would be a good thing for Rugged to start offering. As previously stated, their registration process could use some fixing. Most events let you register an hour before the race starts and if your volunteers are ready, let them sign people in. The timing issue is kind of a joke; if they want to draw more competitive athletes they need a more reliable system. The addition of a master’s class might also be an improvement. But overall I’d totally run another one first chance I get!

Return Of The UberNerd - Dustin Dorough 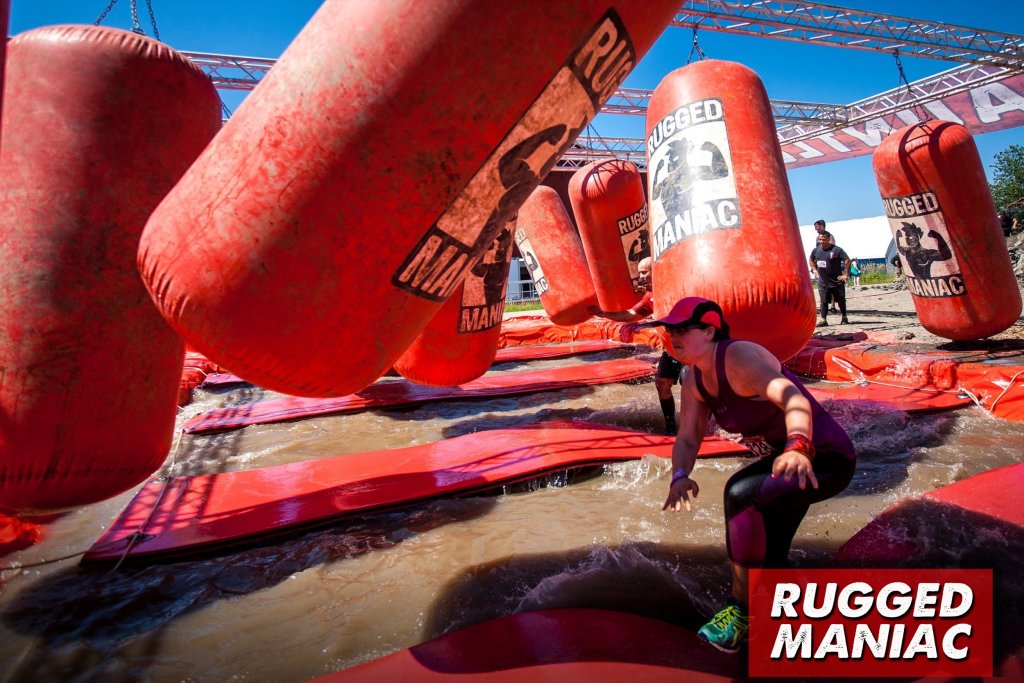 Rugged Maniac Vancouver 2017 was Love At First Run! I’ve run a few OCRs over the past few… 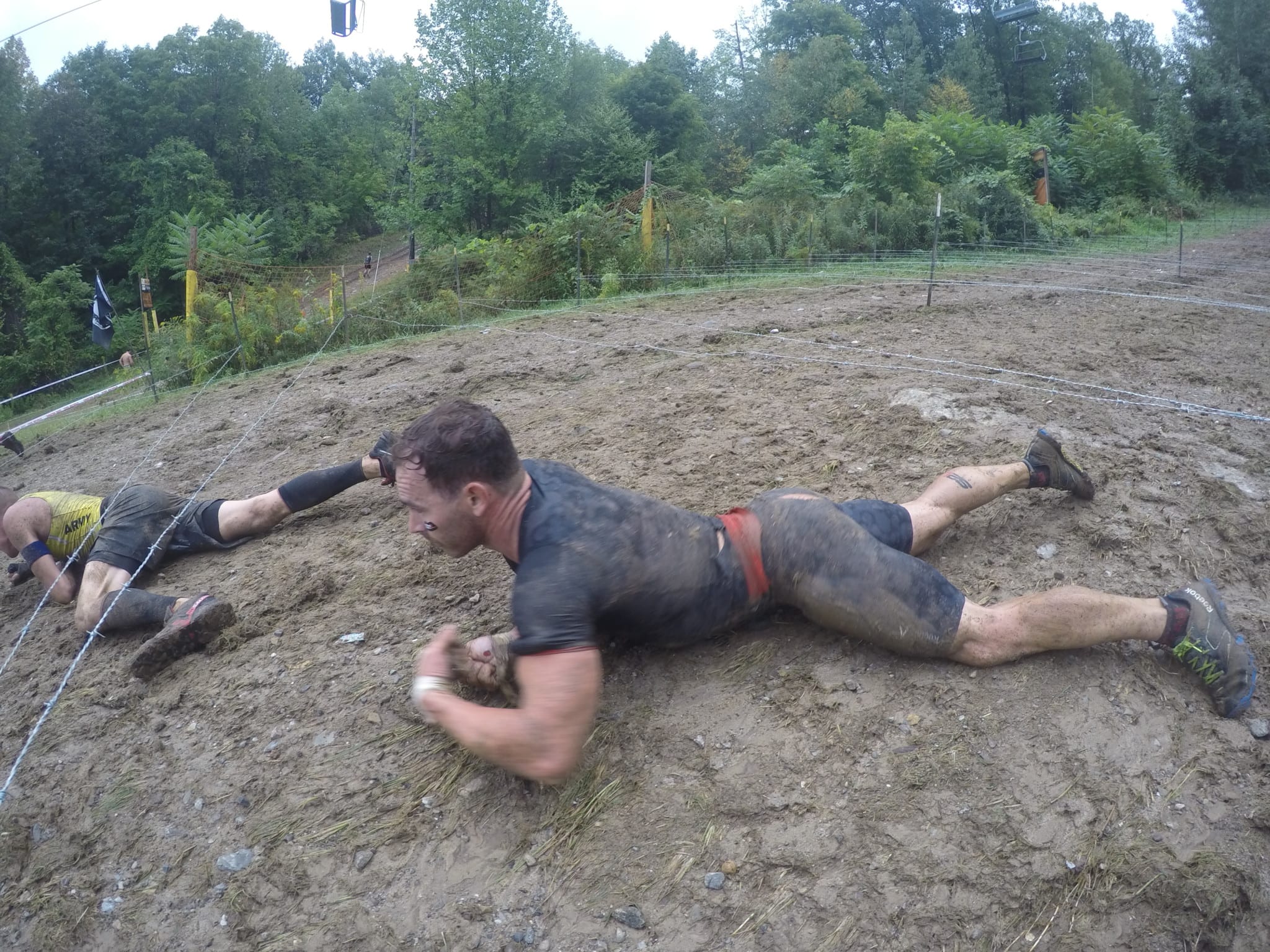 How a Clydesdale reached 75 miles at World’s Toughest Mudder