By Kody O’Brien and Nancy Loranger 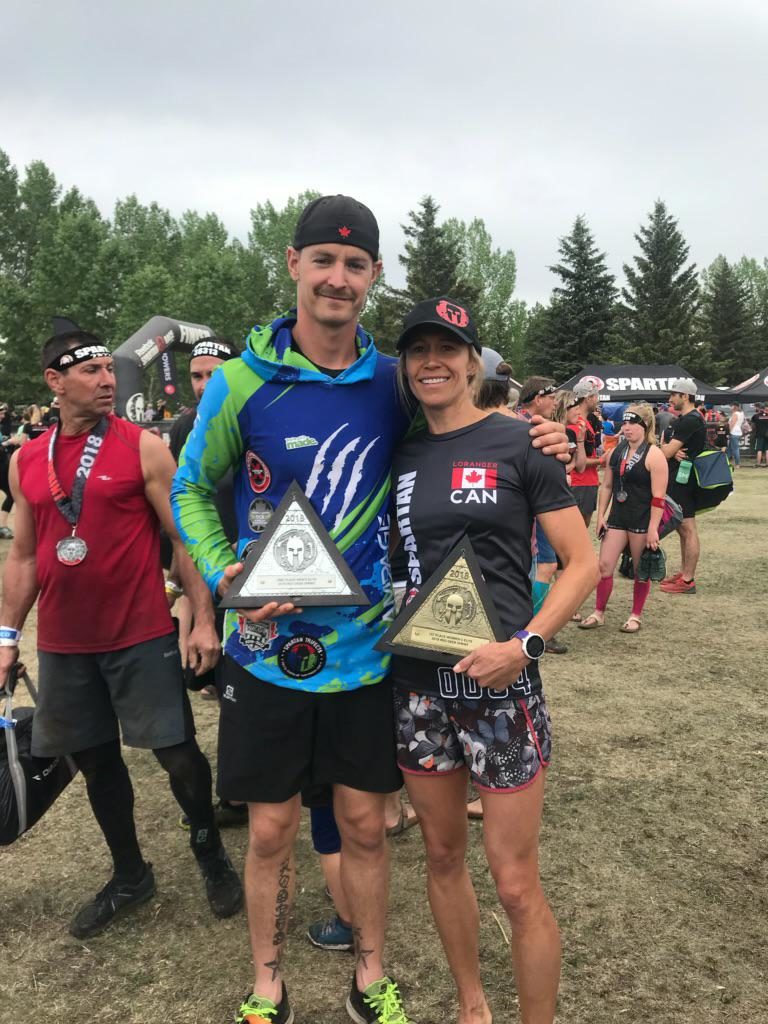 On Saturday June 9th the obstacle course racers from Edmonton and Calgary met in the middle of Alberta once again at Heritage Ranch in Red Deer anticipating the start of the 2018 Spartan season. This venue is located centrally along a highway between two major cities making it a short venture from either city, and also allowing most Racers to travel home for a good night’s rest and saving money on accommodations.

The first day would be the Spartan sprint with a posted distance of 8km and 25 obstacles (actual 7.7km) this is longer than most Sprint distance races held here by a few kilometers and much more like the USA sprint distance of 5 miles. This had racers a bit anxious (usually Sprints in Canada are about 5K/3miles) and rethinking possible game plans and strategies, wondering if they should be bringing fuel and reanalyzing pace.

The weather was perfect with overcast skies and temperatures around 19 degrees C as the elite men started to jump the wall and into the starting gate. As I looked around I saw many new and familiar faces, but everyone looked pumped up! I realized that this was going to be a very fast race. Seasoned racers knew it would be important to get out quick and secure a spot out front knowing that once the single-track approached it would be next to impossible to pass other racers. 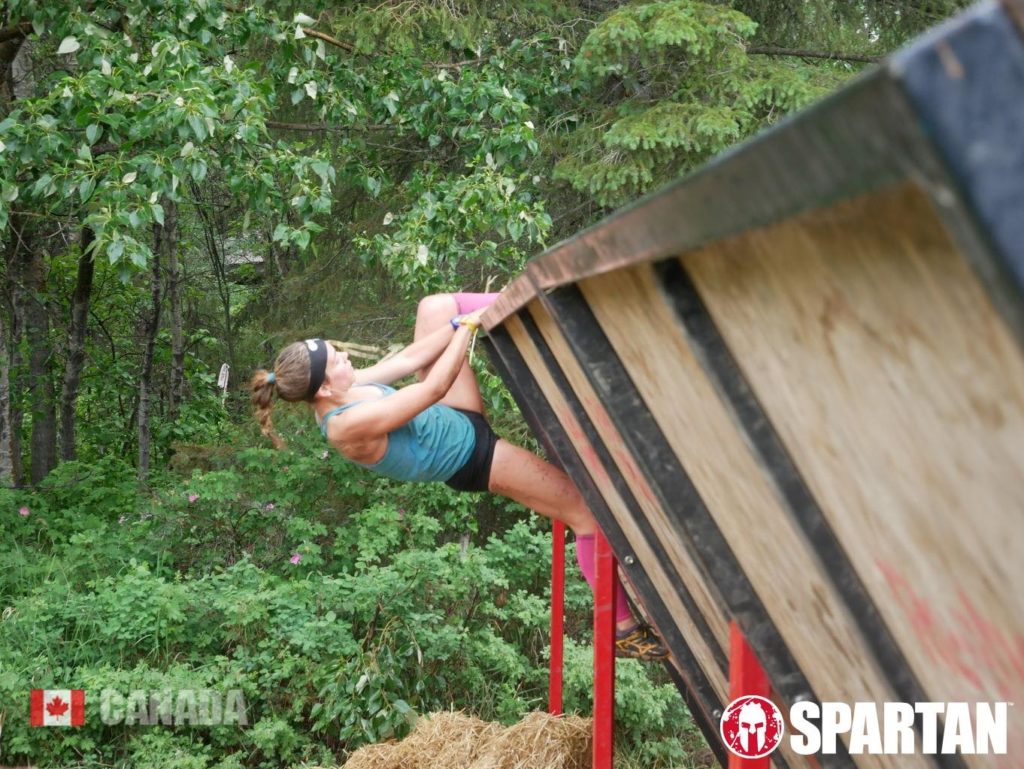 The first kilometer was a blistering 3 min/km pace down the paved Road and into some single track then headed back towards the festival area. This is where Spectators got their first chance to witness the carnage, where the vertical cargo, the barbed wire, Hercules hoist, 4 foot wall, rolling mud, dunk wall and A-frame were all stacked together. Note to course designers: It’s really awesome not just for spectators but as a racer to run through the festival area hearing people yelling and screaming, it fires you up! There wouldn’t be another chance to come to the festival area again until the end of the race, missing the exciting obstacles such as the rig and Olympus. 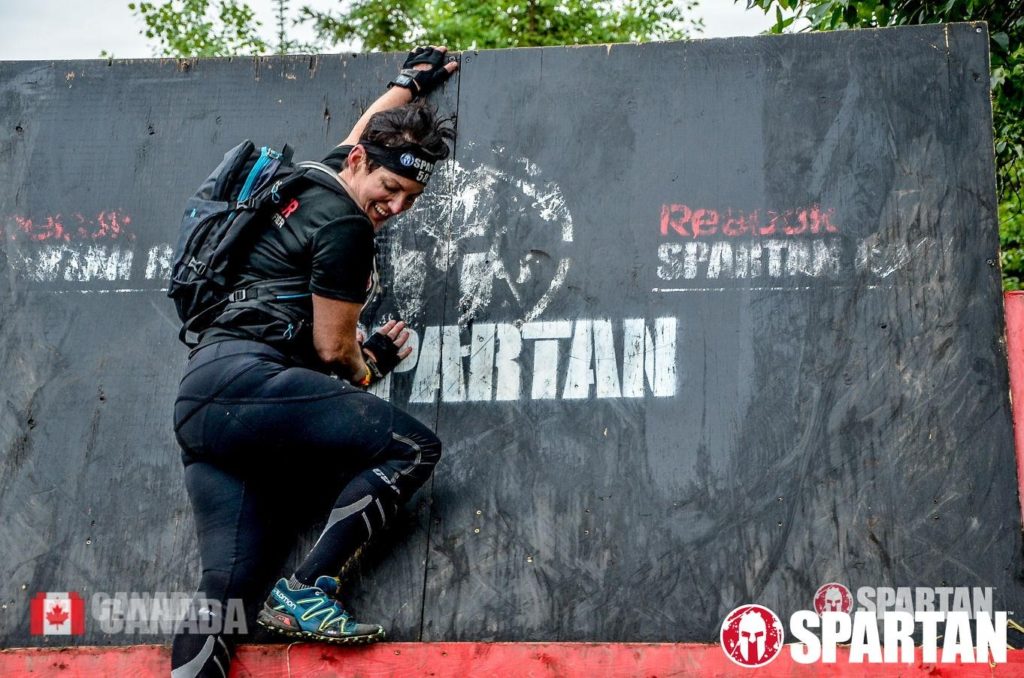 Once leaving the festival area the course turned back into the single-track trail for about 800 m in order to to get us to the next cluster of obstacles in the field, this is where grip would be tested. Obstacles here were 7′ wall, multi rig, Olympus, and tractor pull. The rig was fairly easy if you knew how to work your way through, skipping every other distraction hold (rope, t-bar, low ring, nunchuck) and using only rings, easier said than done, this obstacle left many racers stranded in the burpee pen. 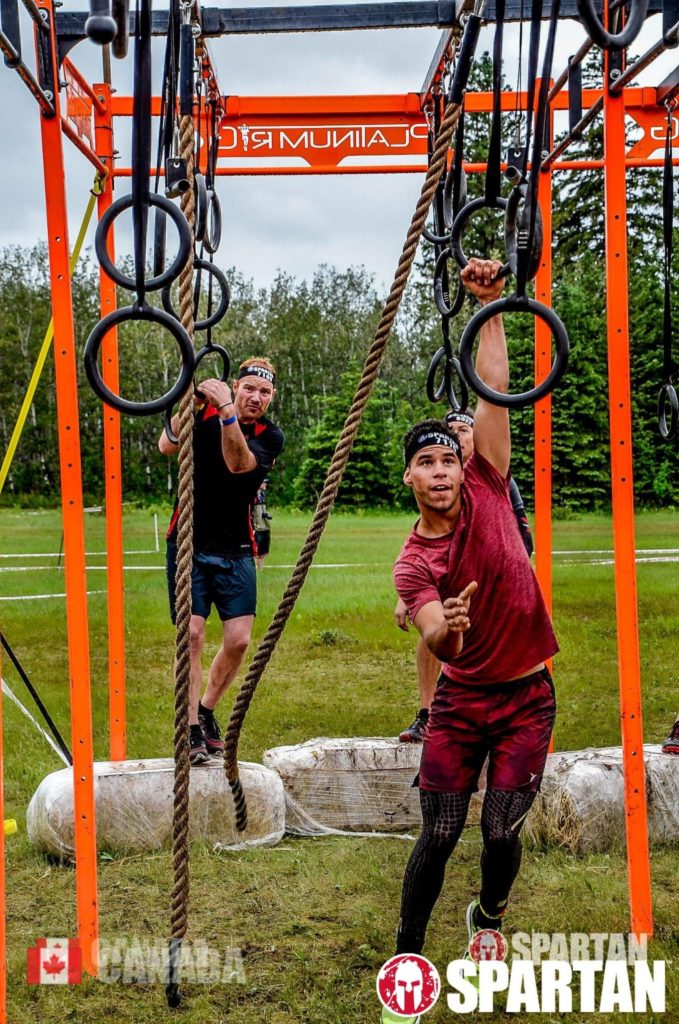 A quick hop over the inverted wall and the next 4-5 km had only 3 obstacles spaced out in between (6′ wall, water crossing (swim) and the Atlas carry. This proved to play well into the hands of strong runners, spanning across a variety of single track and paved/gravel roads allowing racers to push the pace, but this section split opinions at about 50/50, with strong runners loving it and obstacles junkies wishing it would end already.

As the kilometers passed, eventually we reached a sign that we were getting close to the end of the course: The base of the dreaded heritage ranch stairs unveils itself. It’s about a meter 80 climb to the top these stairs, and they will leave even the best of athletes with heavy legs at the top. 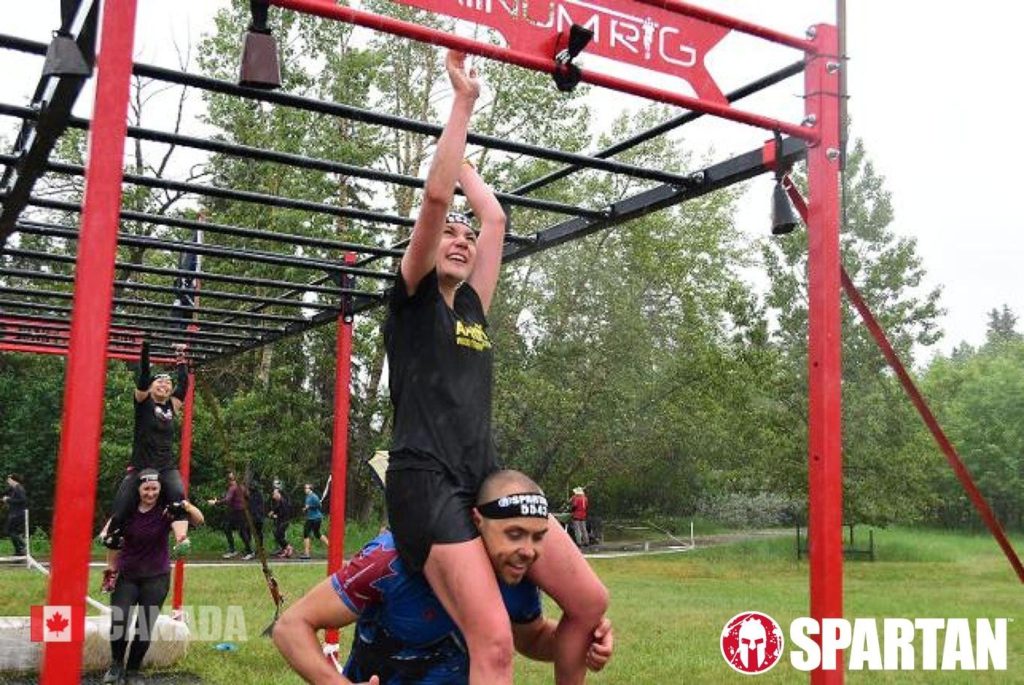 Now in the heart of the ranch, the rope climb and plate drag are piled together among other piles of horse patties… (No shortage here). Once through these obstacles and over a couple fences and the course dives back into the single track, headed towards the sandbag carry. The previous year’s sandbag carry brought many great memories and photos, heading down the river bank along wet slippery rocks, through the river and back up the other side. Many racers were disappointed with this year’s carry, saying it was too easy and that they were anticipating the river trek again. Once we dropped the sandbag off and we were on the final stretch, which was a zip through another 500 m of single track and back towards the festival area for the finale. 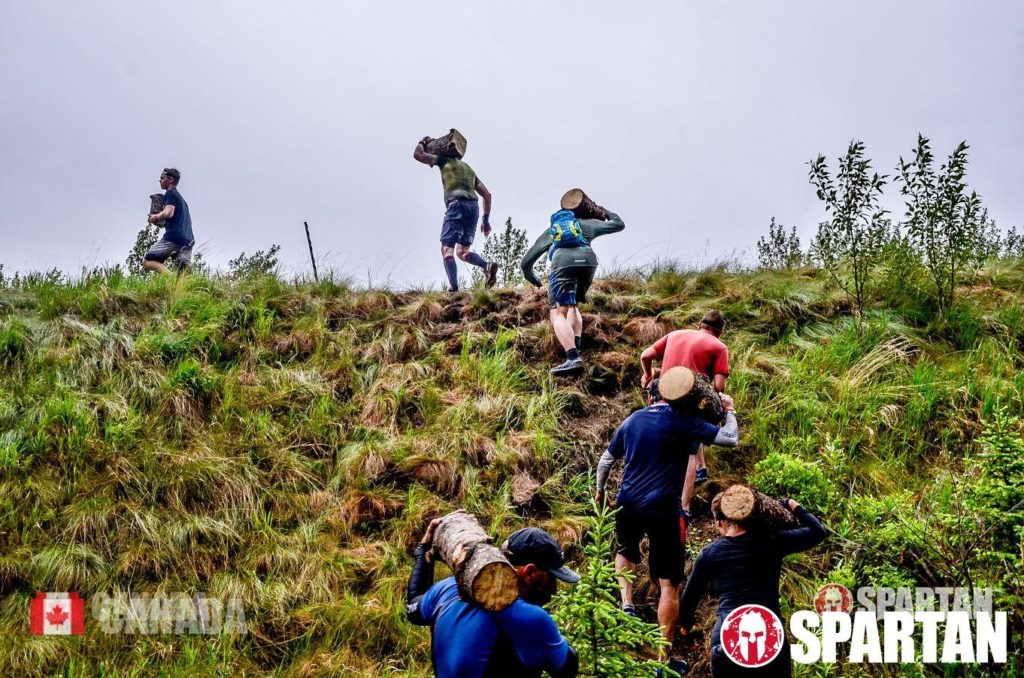 If you had saved gas in the tank for a final push, now is the time to let ’er rip!

The final four obstacles, Monkey bars, Spear throw, slip wall, and fire jump crammed together are all that stands between you and the finish. Having the spear at the finish always makes a close race very interesting, as proved by the men’s elite finale when Josh Stryde and I showed up at the same time battling for 2nd, one stuck it while the other missed, securing the top 3 finishers.

A few notes from the Spartan Sprint race: The course was marked very well and 3 water stations were distributed evenly. Racers didn’t get a chance to see obstacles such as (bucket brigade, Tyrolean traverse, tire flip, z wall, stairway to Sparta and the twister which is still yet to be seen in Canada)

A live feed was provided by fellow elite racers Stefan Wieclawek and Linzee Knowles through the @spartanracecanada Facebook page, providing an exciting and highly entertaining bonus for all interested in following along. I also have to add that I recognize the hard work went into this race by Spartan Canada and it is much appreciated by all. 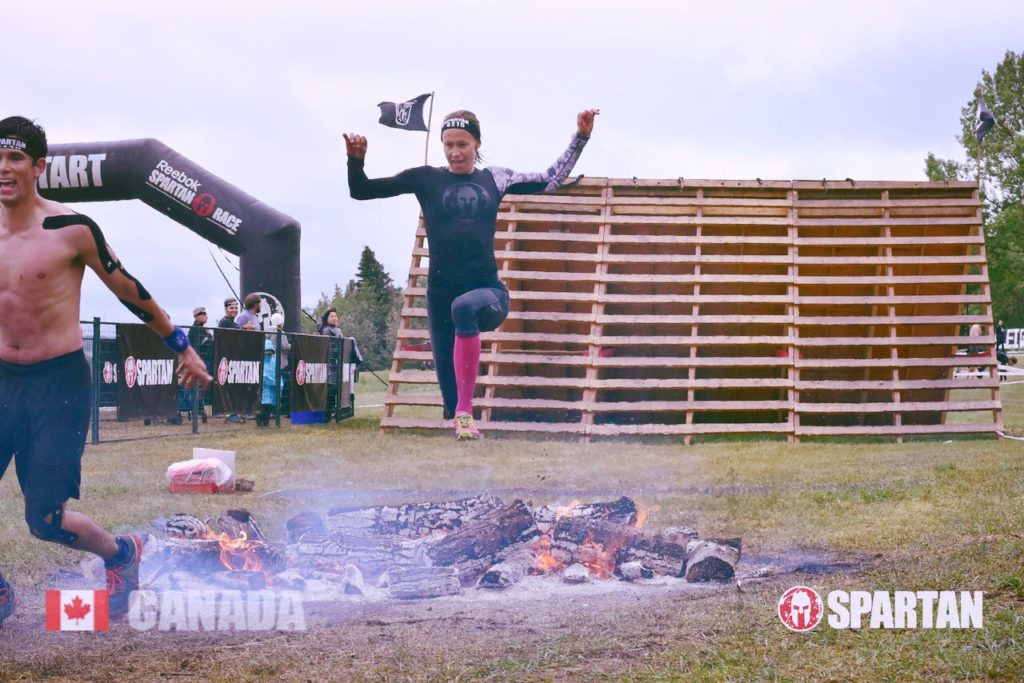 Rise and shine….hmm…more like Rise and Rain on Sunday for the 14km Spartan Super in Red Deer. After a full night of heavy rain, the skies remained gloomy and the wind picked up as racers and spectators huddled under coats and tents waiting for the Men’s Elite heat call to the start line. 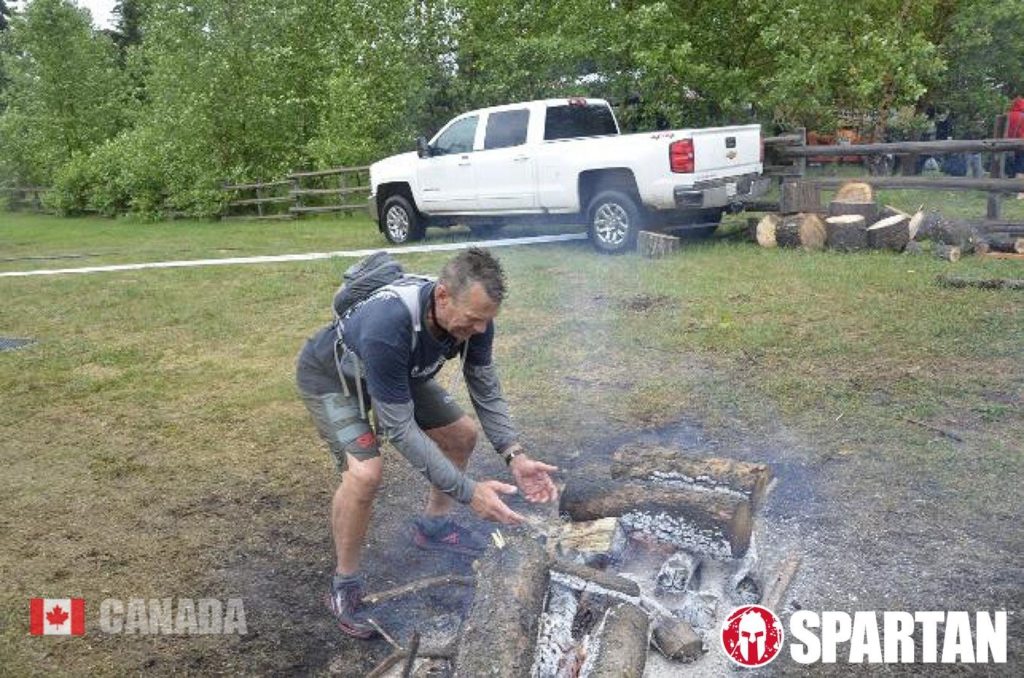 Thirty minutes before the men were scheduled to start, the announcer came out with an alarming statement to notify us that the previous night some assholes had vandalized the entire course! Course markings were torn down, water stations on the course were speared, smashed and thrown in a nearby creek, Olympus was overturned; the course was left in a state of disaster. The announcer specified that the @spartanbuildcrew had all hands on deck and were working feverishly to rebuild the course. Despite being warned that start times could be bumped upwards of 30 minutes or more, Spartan Race was ready to go for the original start time! Aroo!

I and every other person I talked with was very impressed and super grateful (no pun intended) for the hard work the crew had put into getting it back to race ready! 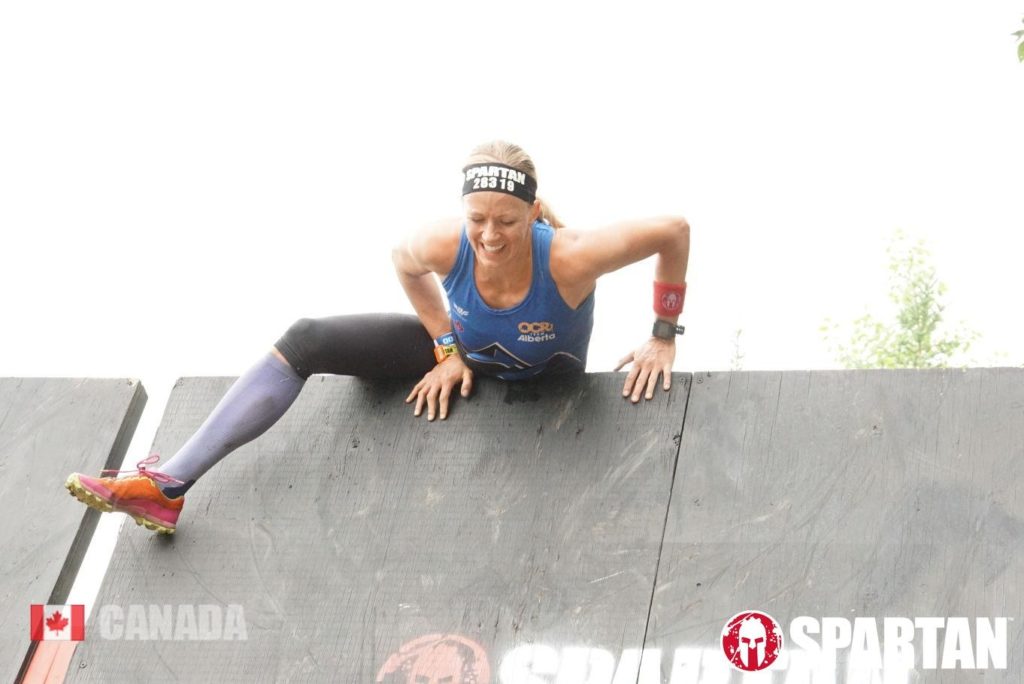 The Spartan Race Super course followed the same first 2 Kilometers as the Sprint course, passing through the Festival area and its gauntlet of obstacles. Racers were already cold and wet from the rain and wind but then had to brave the frigid waters of the dunk wall before hitting the A-frame cargo and back into the forest on twisty single track.

This is where we ventured onto new trails not seen in the previous day’s Sprint course, heading north along the sandy banks of the Red Deer River. Heritage Ranch boasts some gorgeous, tight, technical trails, full of roots, downed trees, and sharp turns. It’s obvious why Spartan Race Canada choose to come back year after year. Racers were forced to look up and pay close attention to course markings or risk the chance of heading off course on a trail less traveled.

This section demanded a fair bit of running before the next obstacle, the log carry. This was a quick but very steep climb up a grassy embankment and down through a muddy swamp before returning to lighten your load and pick up the pace again. We headed back into the single track for another 2 km until the trees divided to reveal a football-sized grassy field and the Stairway to Sparta towering in the near distance. 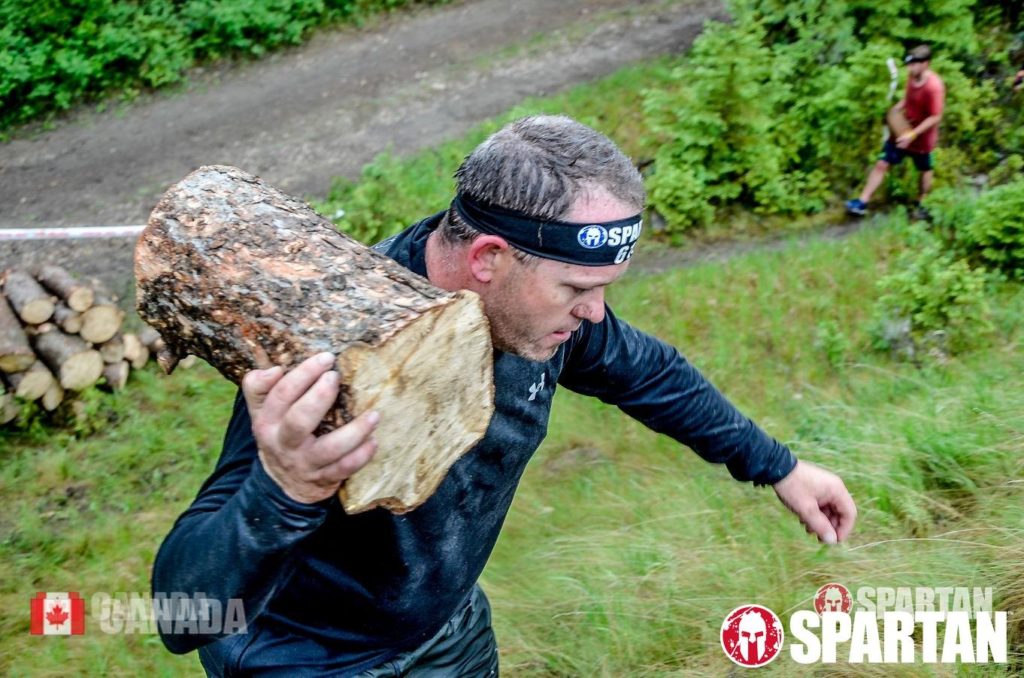 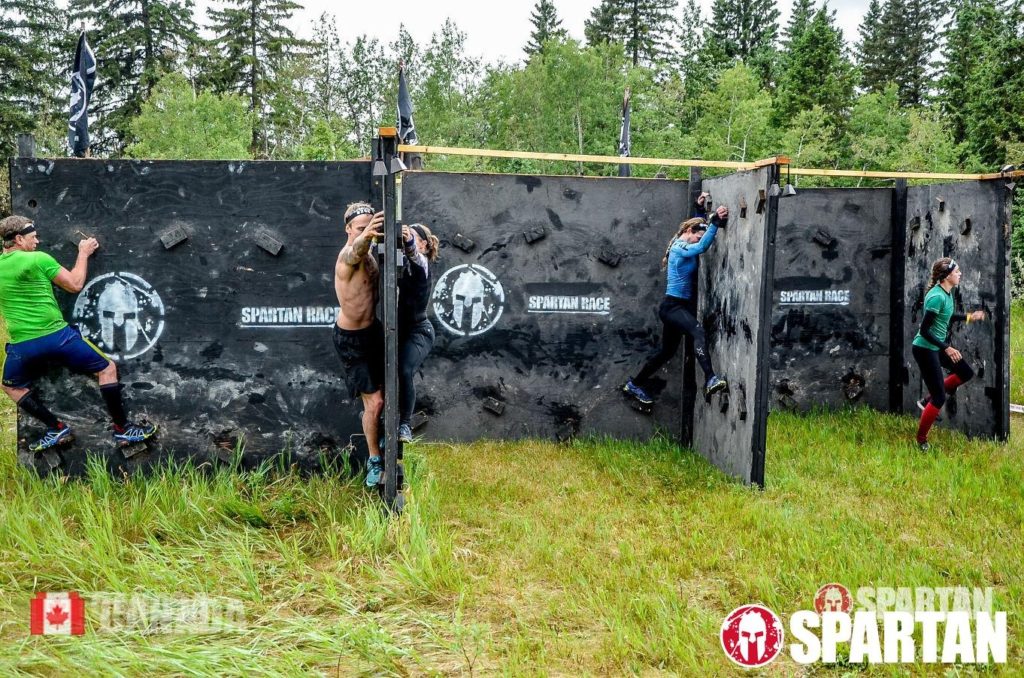 This field, scattered with the likes of Z-wall, Tire Flip, The Platinum Rig, Olympus and Tractor Pull, requires the racer to run lengths of the field while completing these grip-intensive obstacles. I think it would be appropriate to call this section “The Field of Burpees”. It was a challenge for everyone in that field to complete all obstacles without penalty burpees and only a handful of racers likely walked away with a ‘clean’ race. Spartan race tends to get a lot tougher in the wet! 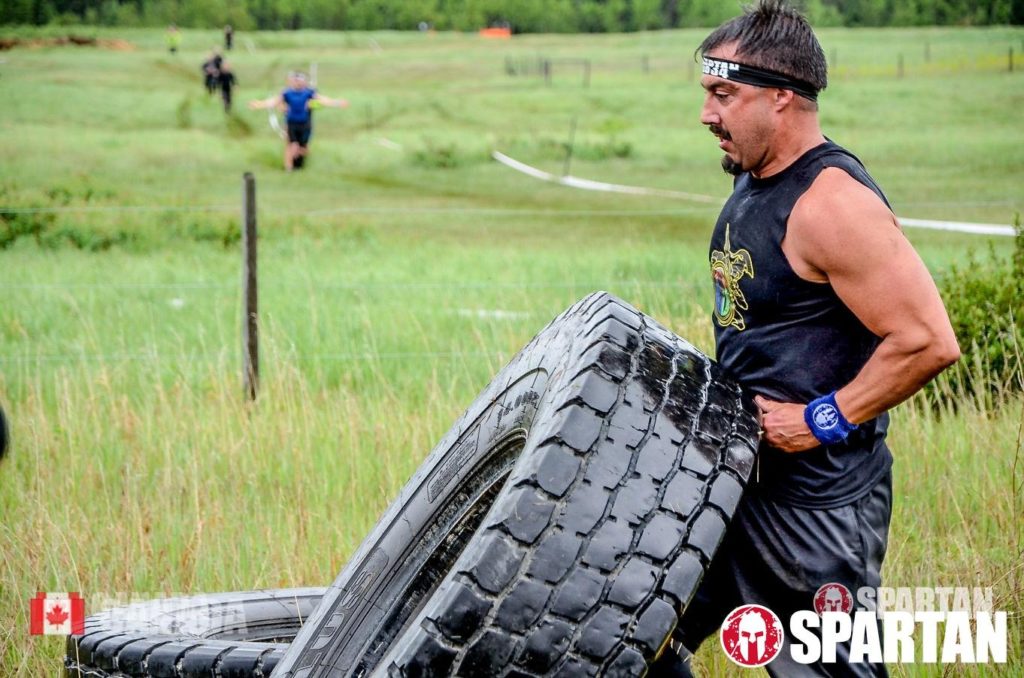 The last section of the Red Deer Spartan race super mirrored that of the day before allowing racers to play with the familiar ground and dig deep to push the pace for a strong finish. This was perhaps the most exciting segment of the race for both spectators and athletes. The last 200m was stacked with an uphill pavement slog to slippery Monkey Bars followed by good ol’ Spear Throw. The burpee pit was an active hang out place at both obstacles before hitting the extra slick Slip Wall and finally Fire Jump to the finish.

Overall, the Spartan race Super delivered a challenging, fast-paced course that brought most athletes to their knees upon crossing the finish line! 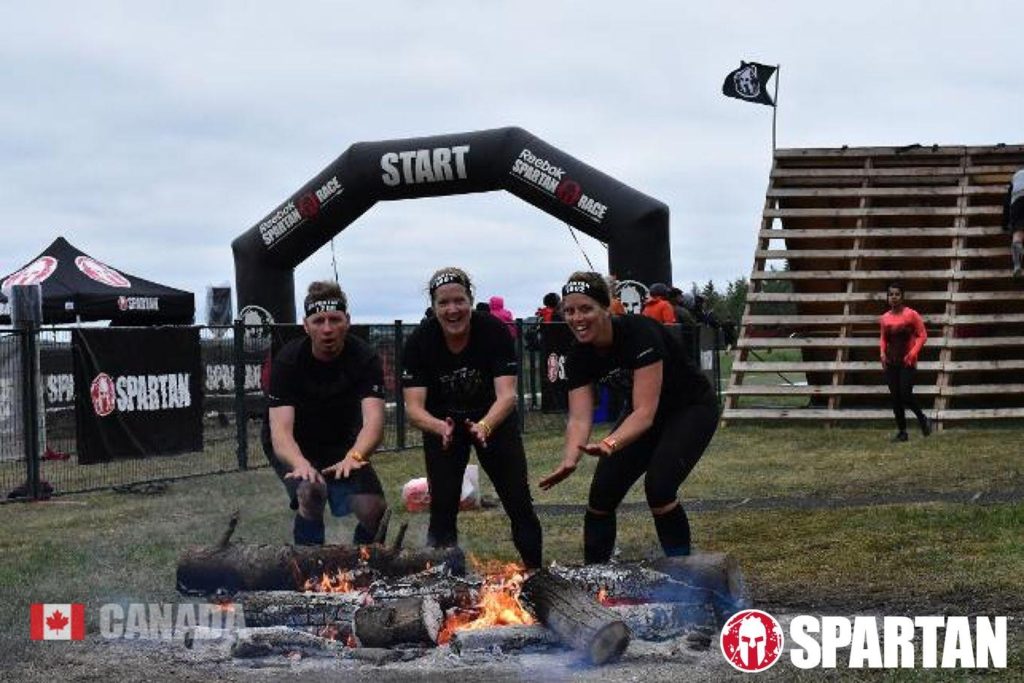 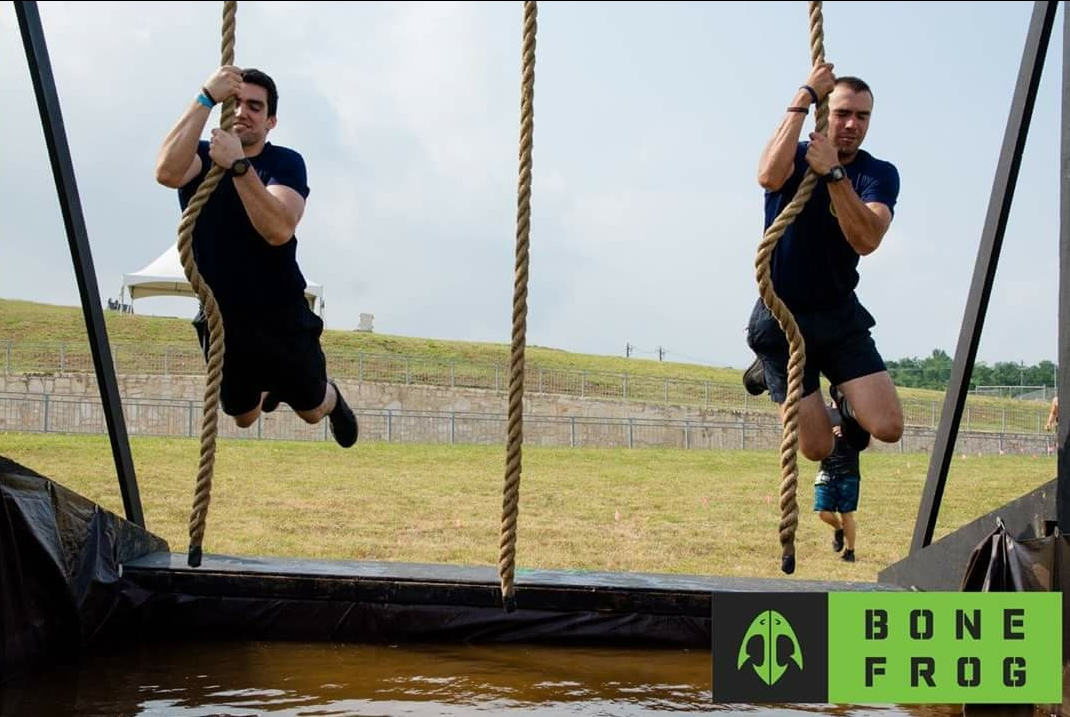 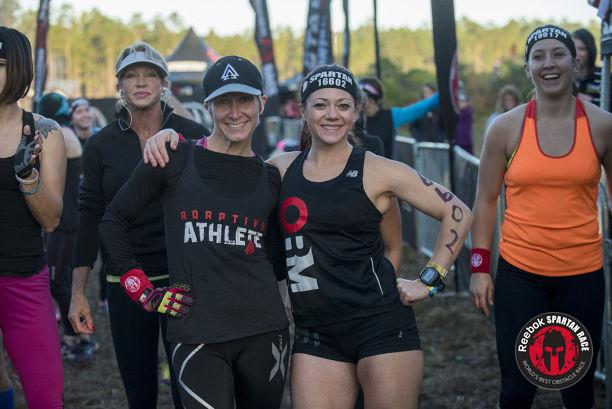 Jacksonville Super/Sprint weekend finished off the 2016 Spartan season this year in Bunnell, Florida outside of Jacksonville.  A…