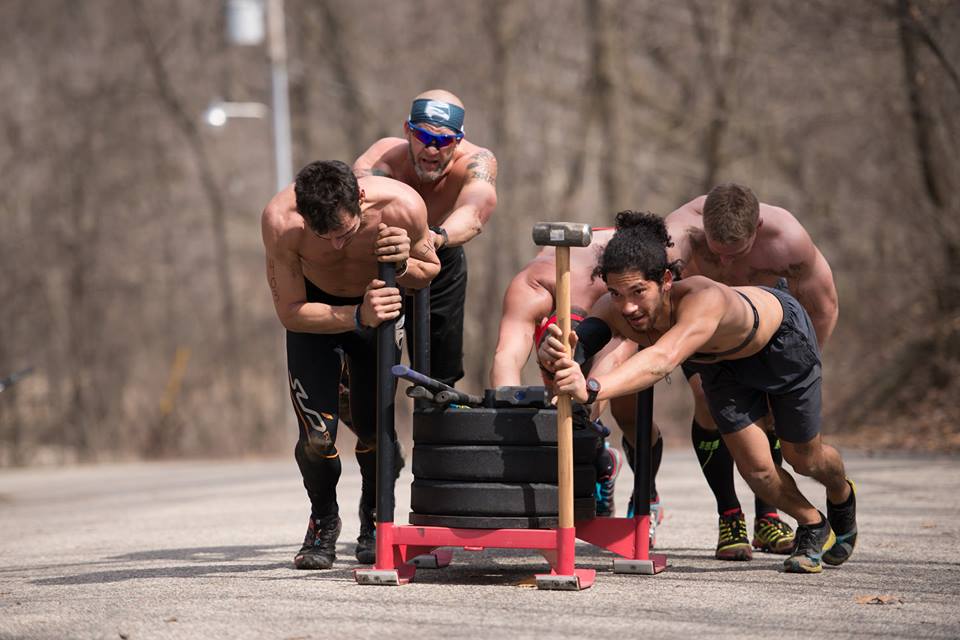 The sixth edition of The Hammer Race was held April 8th at Bluff Valley Campgrounds near Zumbro, Minnesota. For those of you looking for a different type of OCR challenge this race series might be it. Why? You get to take a buddy with you the entire race! Now it’s not the type of buddy who will talk to you or let you share their gel packs. No, your buddy for the 5.6-mile race is an 8-pound sledgehammer! That’s right, as you could probably have guessed from the race title this event is centered around completing obstacles involving your sledgehammer. Plus, you get the bonus of having to carry your sledgehammer with you up and down the steep back country hills that ended up being around 700 feet of elevation gain, but certainly felt more like twice that! 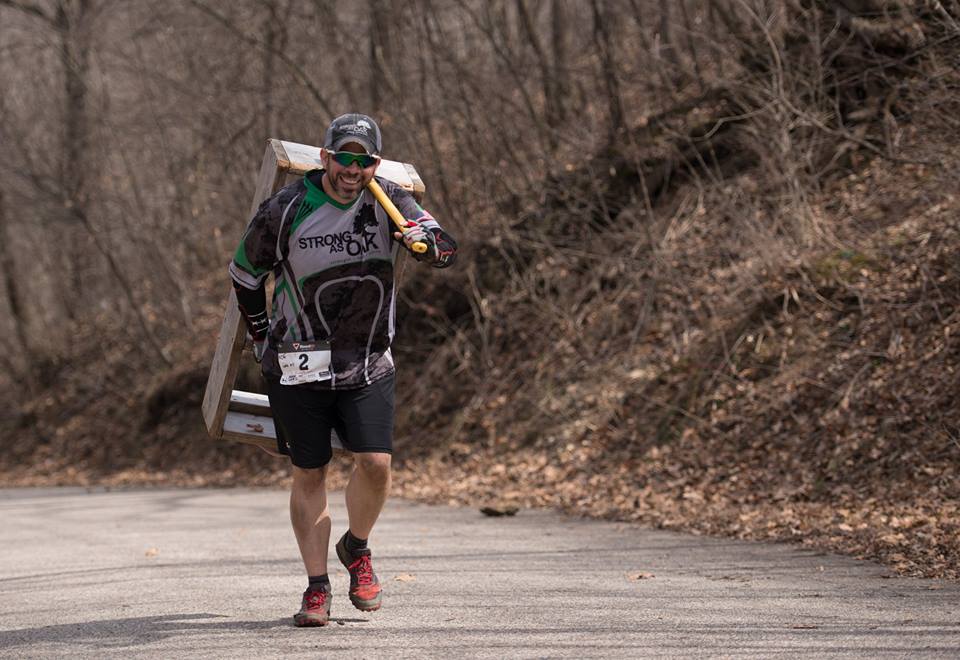 The Hammer Race starts their events around noon with elite individual and teams starting off first with the open class following up soon after. This noon start time is an excellent idea for smaller race series because it allows racers to make a long-distance drive without having to spend money on a hotel the night before. The start/finish area and festival area is located inside the campground and once the race starts athletes are led for a short distance away from the grounds where a series of walls awaits. One doesn’t have to carry your sledgehammer with you over the walls, simply setting your hammer to the side for retrieval after the wall is negotiated is the rule here. Once the walls are complete racers are led along an easy section of trail to a tire flip. There were decent sized tires of the individual flips and enormous tires for the teams to flip. This obstacle also was to be completed without your sledgehammer, but it was the last time you could complete an obstacle without using it. After the tire flip athletes were led into the wooded hills for our first taste of trying to negotiate the technical trails while trying not to catch the handle of your hammer on everything. Up and down we went till we came to a dug out low crawl which had about enough room to squeeze a small child through and was quite difficult to get through with a sledgehammer. Now racers were led up another hill back to the campground area where a series of low crawl nets installed over stadium seating type benches shaped in a semi-circle. If you thought a standard low crawl was tough try doing it on a curve with a sledgehammer! Now moving across a road towards a sandy section of terrain Hammer placed a series of saw horse type barriers that required being navigated under. 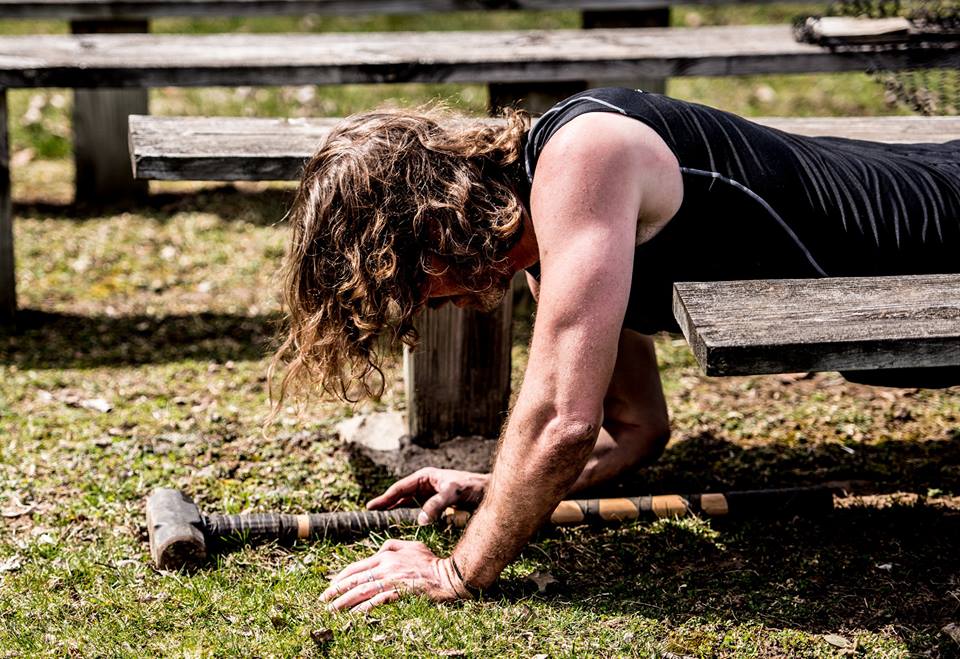 Now back on the trail athletes were led to a series of tall dirt mounds and along a river where another set of walls were waiting for us to traverse. This led to the first “buck” for athletes which required use of the sledgehammer to knock a log from one side of the “buck” to the other before proceeding on a trail which led to the back side of the grounds. After a nasty climb up a section of hilly terrain made from sand athletes were confronted with a tire drag. Now this wasn’t your normal tire drag, this one was done Hammer Race style. Two car tires were linked together with a hole cut into one end for a racer to slide the handle of their sledge through. Athletes were required to drag this tire setup around a circular section of pavement and back to where they started their drag. One more log on a buck was a short jog away and that led down a steep wooded slope to a section of flat trail. This was one of the very few flat sections of the course but it was the calm before the storm because waiting for racers a short distance away was a unique carry up a paved section of road. Individuals were now required to carry or drag a section of shelves along with their sledge up and back down the road. Now the teams had it much worse here. They were required to push a Prowler-type sled loaded with weighted plates and up and down the road. My team of 5 well-conditioned athletes had to take multiple breaks during this task and we all agreed this was the toughest part of the course. 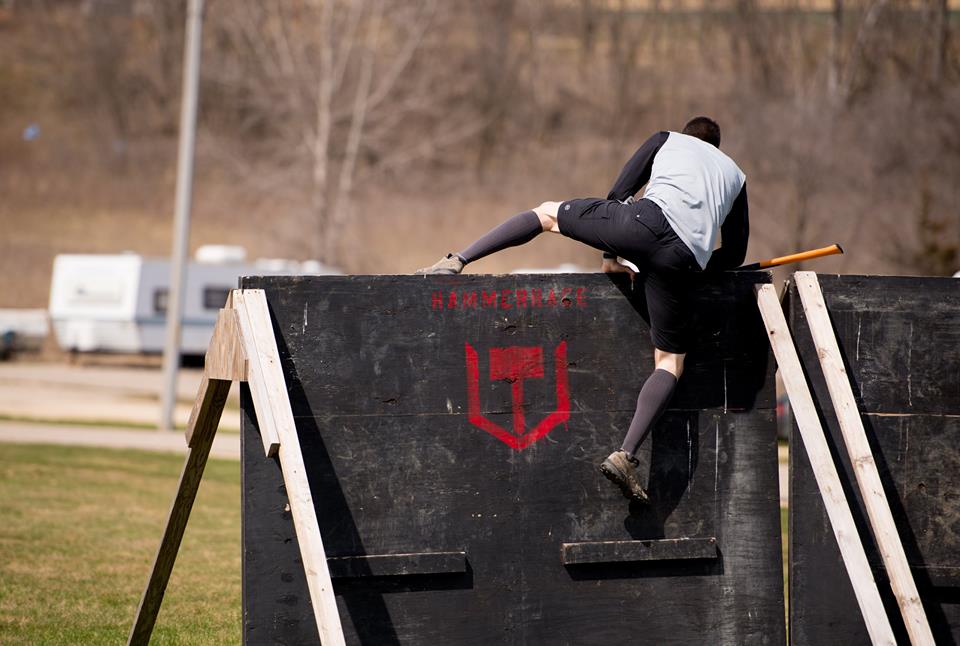 Hammer Race placed a much-needed water station right after completion of this obstacle and then it was back on the road and over another wall before being led along a grassy trail that ended up with racers getting their feet wet in ankle deep mud along the river. After having our shoes caked in mud Hammer led us up one of the larger and steeper hills thoroughly gassing us as the trail turned into a series of switchbacks up and down some nasty terrain. I lost count of the number of times my sledgehammer handle got caught up on tree branches at this point and my frustration level was mounting. The back third of the Hammer Race was mostly about the terrain and not the obstacles. There were a few walls, another log on a buck, and one tapped off section of forest which required athletes to find their way out through an actual door. But steep hills and valleys mixed with awful footing was the norm here. Add to that the difficulty of negotiating this treacherous terrain with your sledgehammer in tow made this section extremely exhausting. 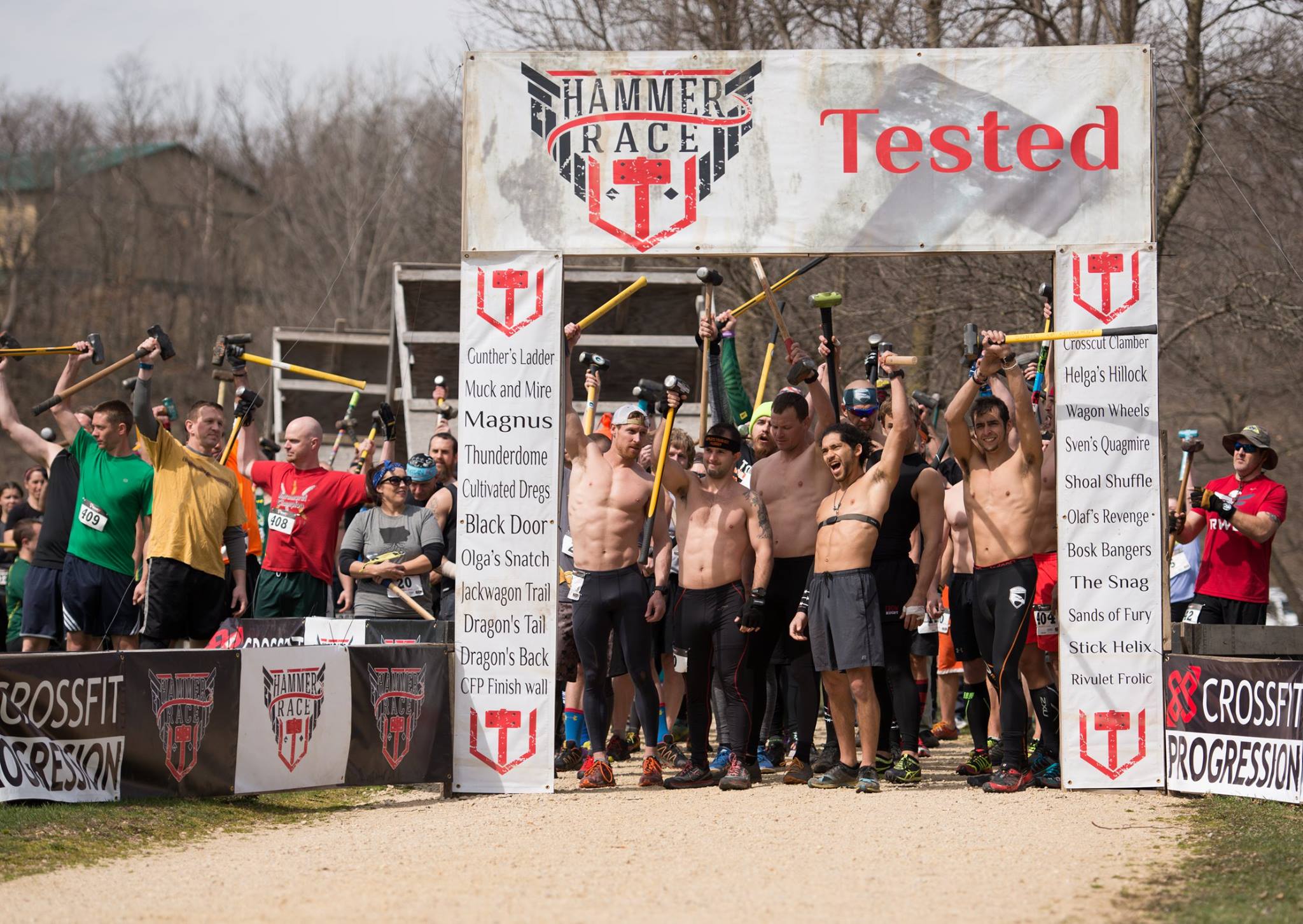 Rounding back on the trail towards the festival area and finish Hammer Race set up a final few obstacles to overcome. Racers started this section by picking up a used car tire and running right back up and around a hill from where they initially came before dropping the tire back off. A short jog on a gravel path led racers to the last 4 obstacles all in a row before crossing the finish line. Those obstacles in order were a log on a buck, a car tire on a buck, low crawl under an A-frame and two last angled walls that needed to be traversed. Refreshments and killer medals were waiting for racers once they crossed the finish line and caught their wind. Post-race warm showers were provided in the campground bathhouse to wash the elements away along with providing a great area for athletes to show each other their battle wounds and talk about the race. Photos for this event were provided free of charge and parking was the standard 10 dollars. So, if you are interested in testing yourself in a unique way, you might want to check out the next Hammer Race this coming October! 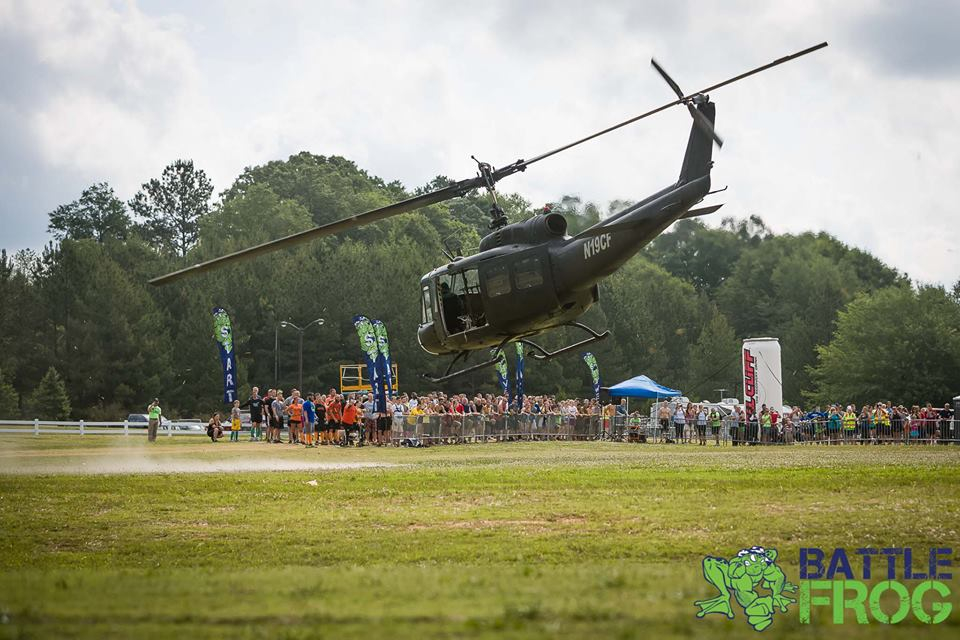 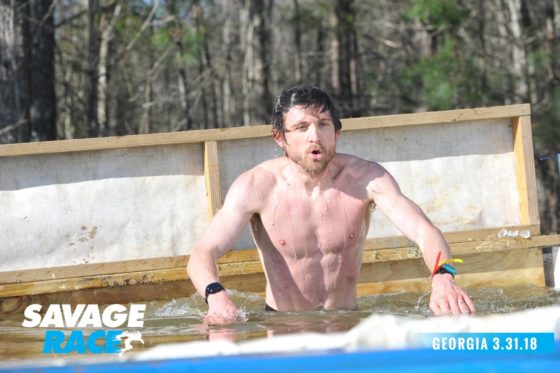 Moonlight stables in Dallas, Georgia set a majestic scene for truly one of the most Savage courses I… 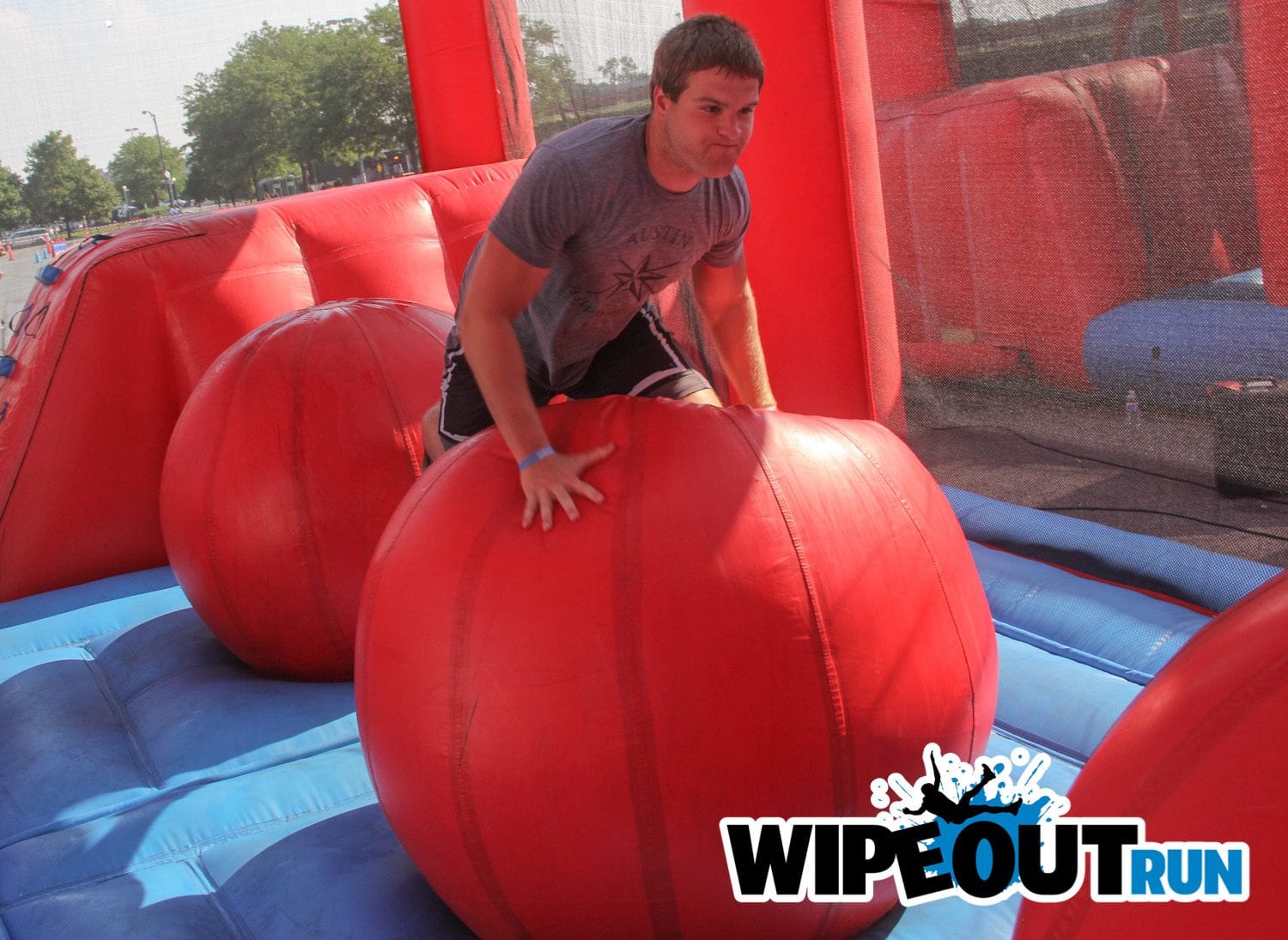 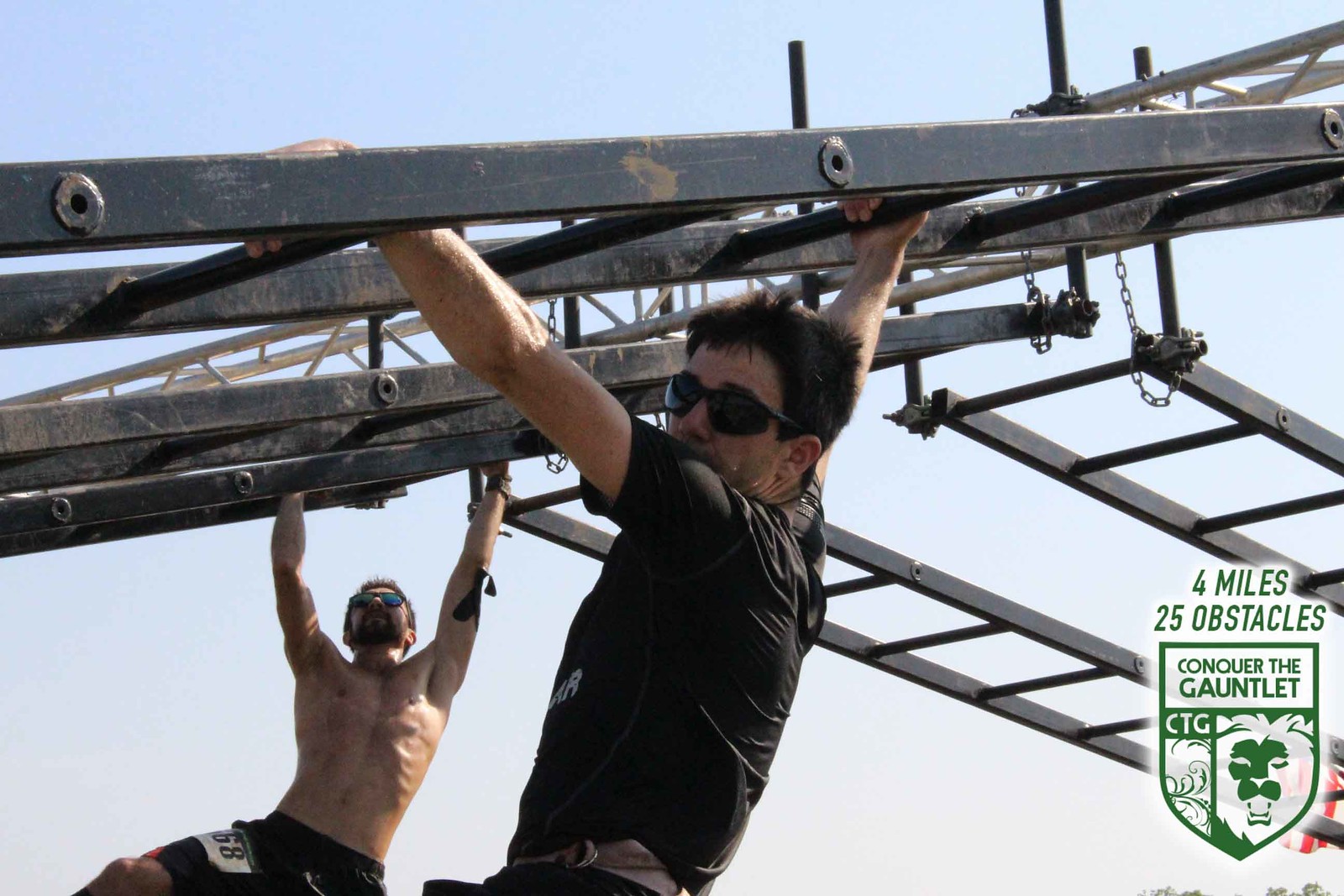