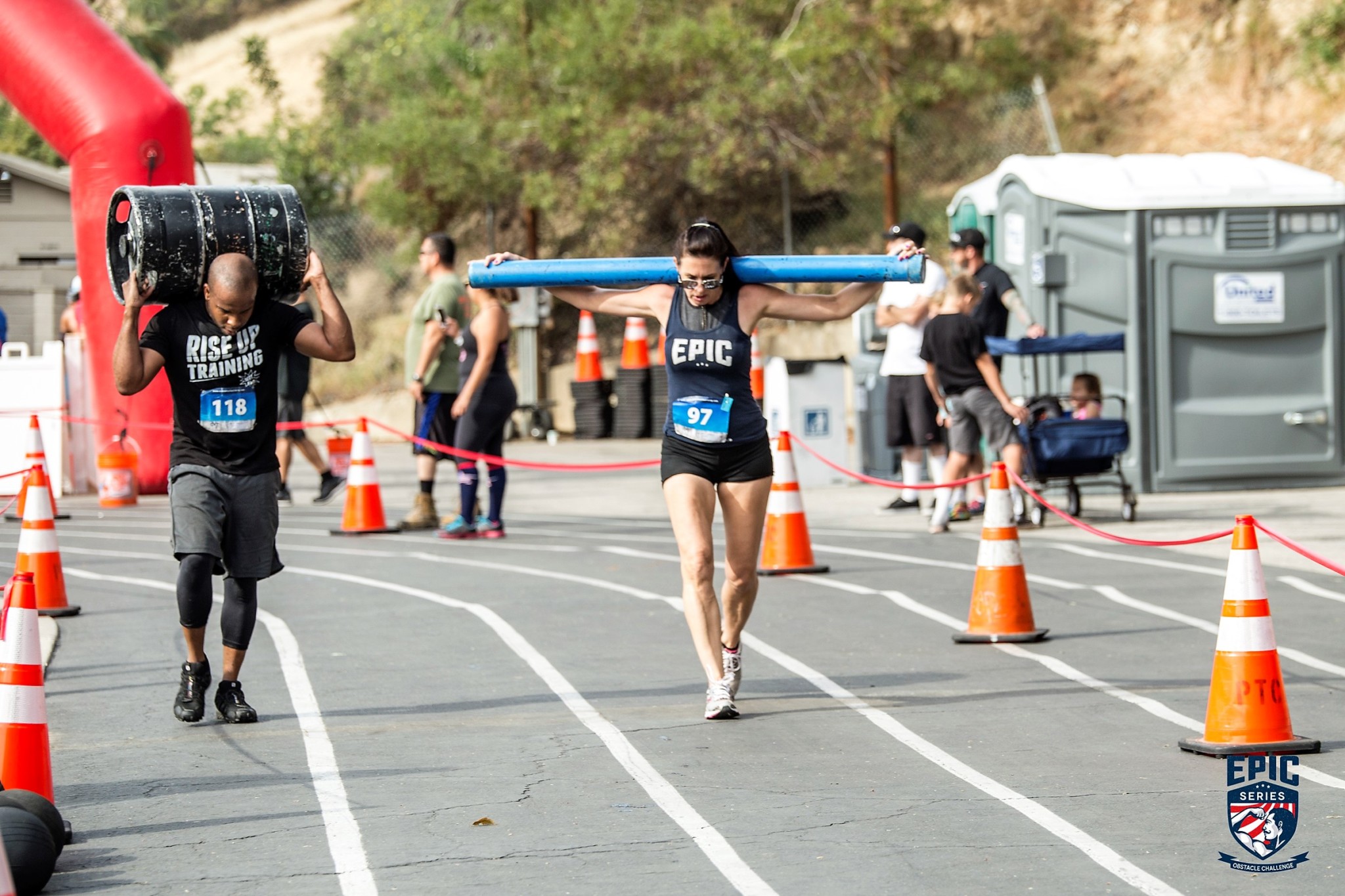 Epic Series OCR made their way back to Los Angeles, California on May 6 for their second event at the Los Angeles Police Academy. For those of you not familiar with Epic Series let me give you a little background.

Epic is a Southern California based race series that’s focused primarily on functional movements with a few OCR type obstacles thrown in. They currently don’t venture outside of the SoCal area very often due to the high cost of transporting all their heavy equipment, so you may not have yet heard about them but listen up!

The formula for Epic’s success is pretty simple, but highly addictive. They pack as many obstacles as they can inside a course about the size of a standard 400-meter track. No miles upon miles of endless running here as most of their events have a total distance of between a mile to a mile and a half. The use of the track format breaks up the lines of functional exercises located inside of the track area and allows Epic to put on their events at venues with limited space quite well.

The Epic race format breaks down like this. Run a lap, usually with something awkward and heavy, then perform a series of functional movements with a few OCR type obstacles thrown in before running another lap. There are three different levels of difficulty at most of these stations throughout the race. Competitive men, competitive women, and open with weights and reps adjusted accordingly. I’ll break down the race in a lap by lap format, so it’ll be easy to follow. 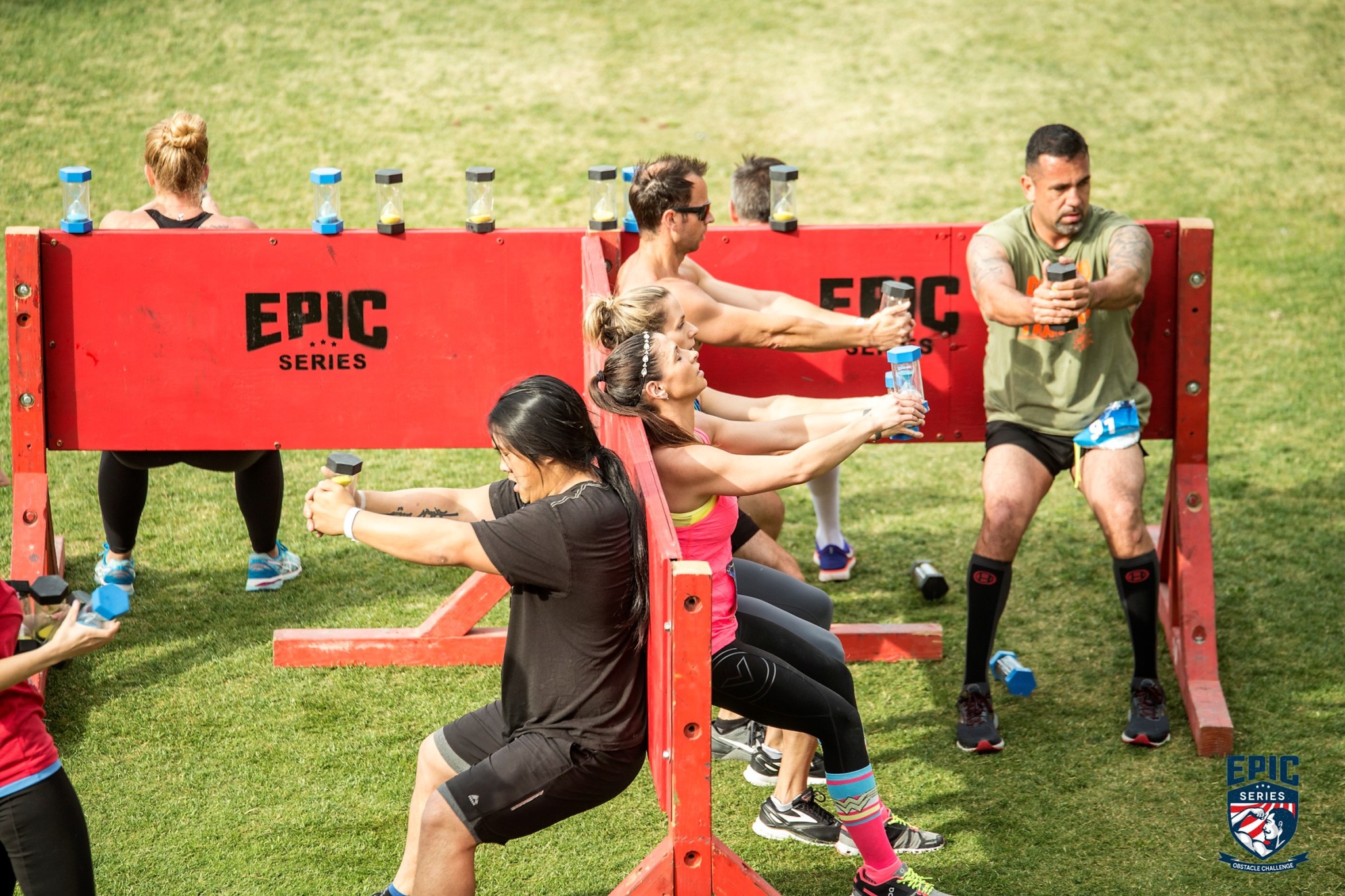 Lap 1. All athletes start out the race by running their first lap carrying an Epic Series flag. Epic appropriately calls this the “flag lap” and once the lap is completed flags are dropped off at the starting line and its then time to get physical with the first series of functional movements starting off with the overhead squat for reps.

Athletes are required to pick up a weighted bar for touch and go squats while standing over a bucket. Volunteers are located at every station giving instructions, directions and occasionally calling out athletes for improper form or to repeat a rep. After completing the overhead squats Epic lined up their ladder wall and tri-wall, which each need to be traversed before continuing. 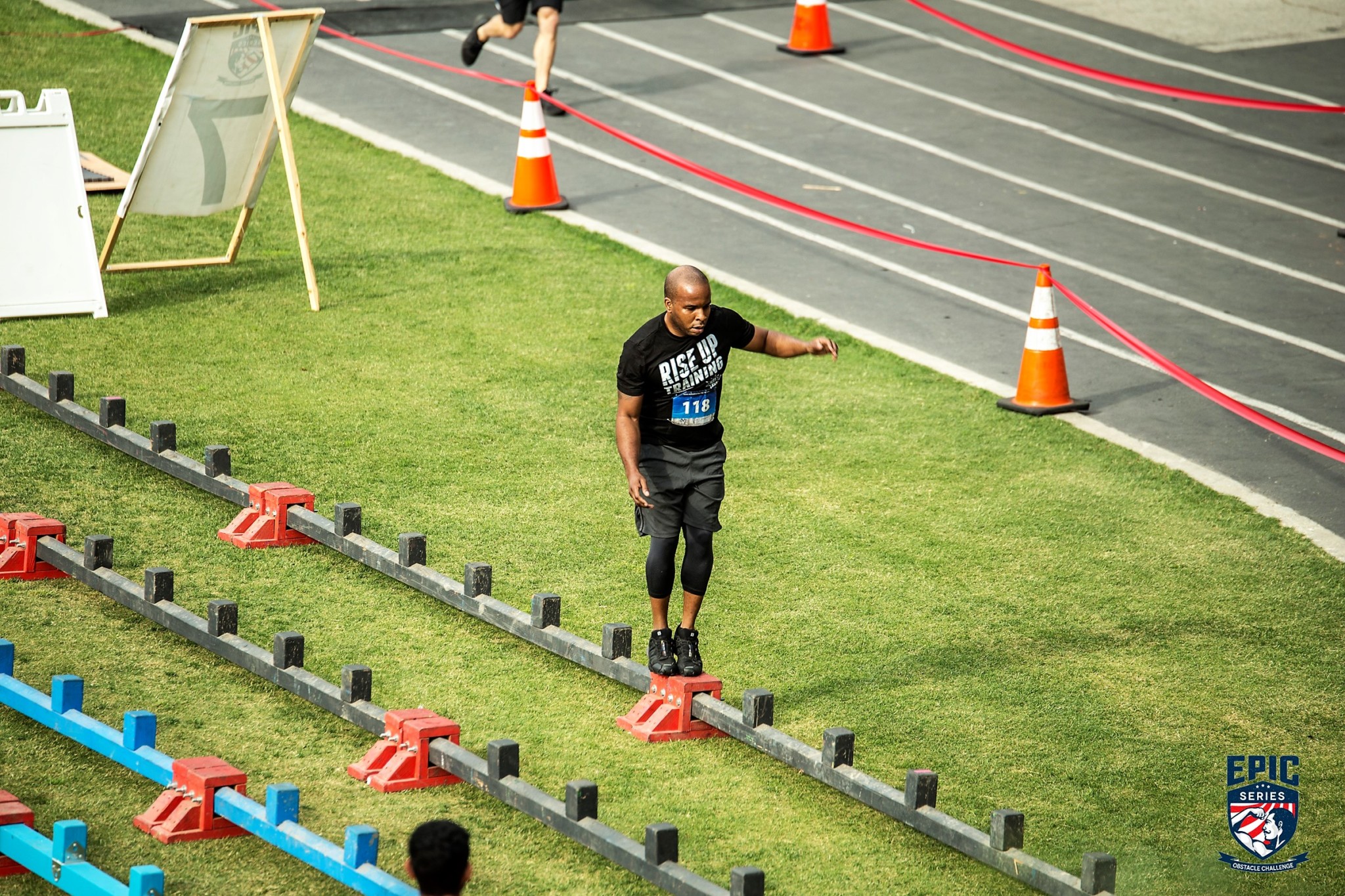 Lap 2. Athletes now were required picked up a medicine ball to carry around the track for their second lap leading up to the Atlas Stones. Atlas Stones of varying weights needed to be picked up and dropped over the shoulder onto a mat. Miss the mat and the rep doesn’t count so be precise! This took a lot of energy leaving athletes very winded, which made the next balance obstacle even harder.

The Epic balance beam was next in line and is truly unique as it’s built with pegs attached to a series of 4×4 boards suspended above the ground. This thing wobbles all over and usually causes me to fall at least once per event. 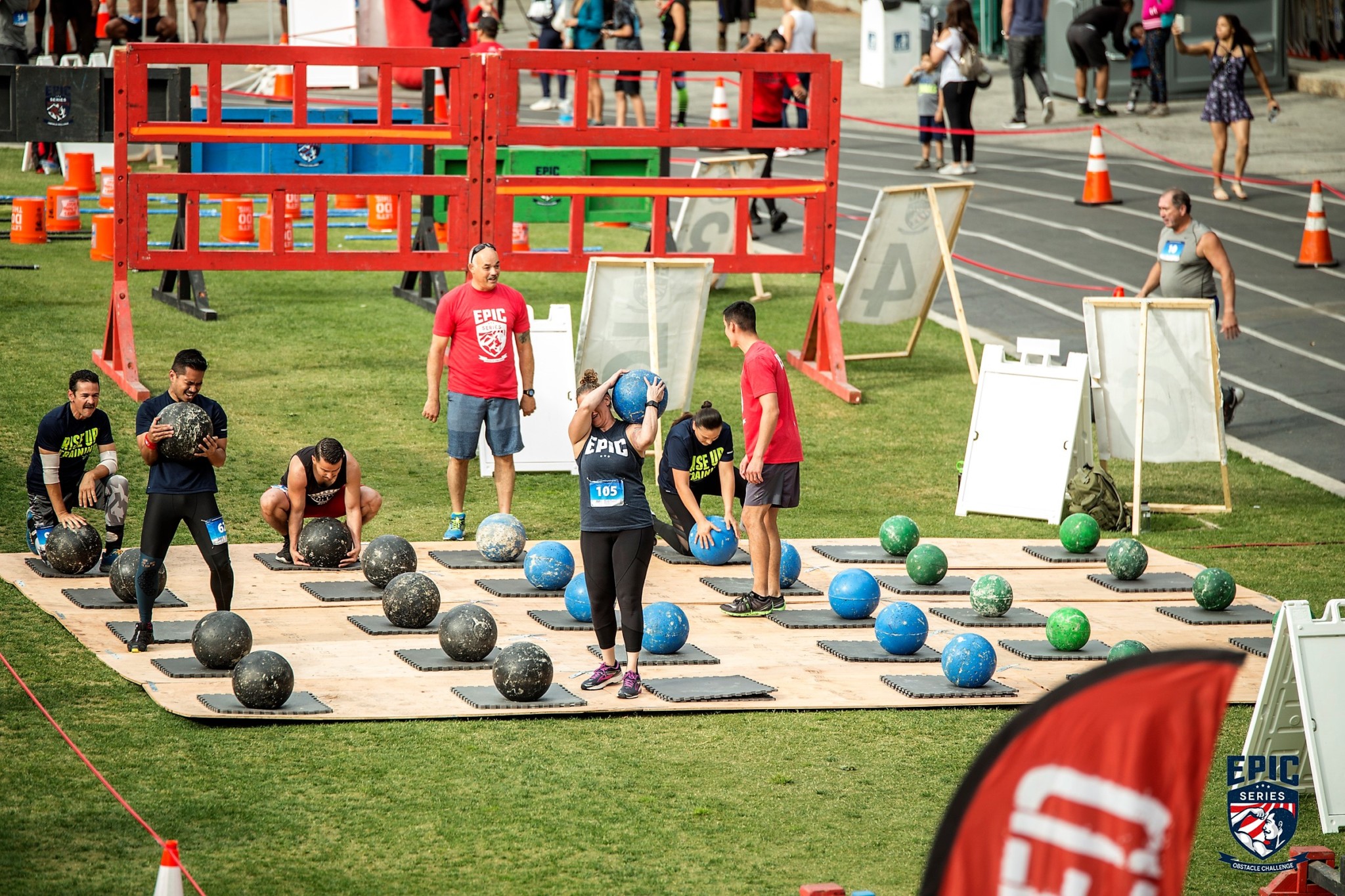 Lap 3. This is where the going starts to get tough as athletes are required to run this lap with a tough to balance slosh pipe. Immediately upon completion of this lap, it’s time for another Epic Series favorite, the squat wall. Pick a spot on the wall and assume the wall sit position while holding an hourglass with your arms straight out in front of you while you beg for the sand to fall faster! This obstacle is made even more fun as a volunteer constantly yells at you to keep your arms straight or they’ll make you start over.

Now normally this is where Epic sets up their lumberjack station which requires athletes to pick up a metal post on a hinge and flip it to the other side, but because this obstacle rips up the grass in a major way Epic had to substitute an inflatable bouncy house type thing as a replacement. Not nearly as much fun, but still a cardio crusher nonetheless.

The rope climb with a bell tap at the top was the next up in this long line of obstacles followed by the plank station. Another hourglass was used here as you sat in the plank position and watched those small grains of sand moving ever so slowly down. Continuing the fun on this lap was a keg hoist for reps followed by another crossing over a ladder wall.

Burpee box jumps for reps followed with an inverted wall immediately after leading to the last obstacle on this lap, the archer. Bow and arrows tipped with a rubber stopper were shot at a tiny target set up on a net and if you have never done this before it could take you forever. Luckily for me, I am a former bow hunter, so I nailed that sucker on the first try! 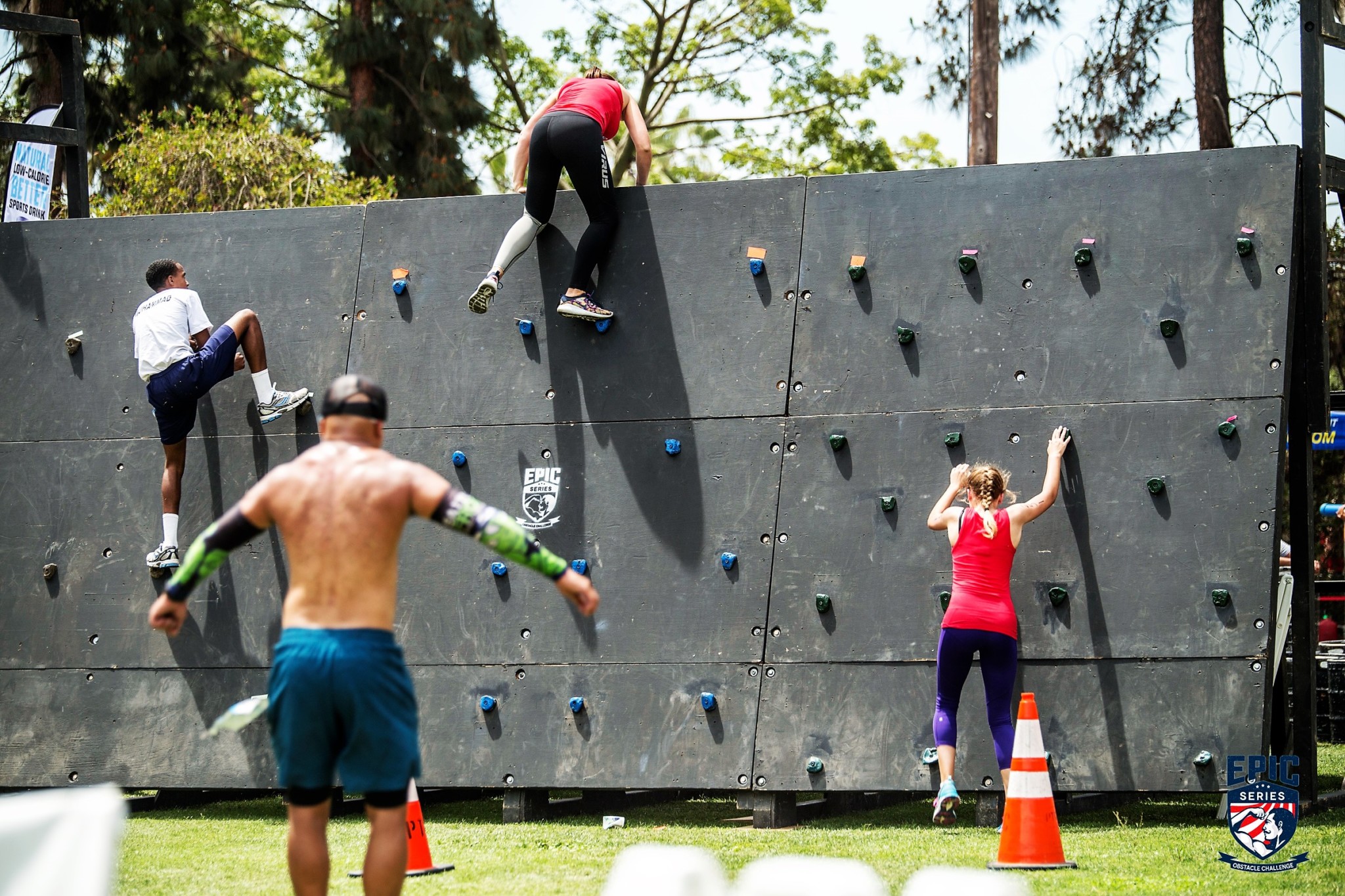 Lap 4. The carries started getting harder here as athletes now grabbed two jerry cans for the farmers carry lap testing out that grip strength to the max. After setting the jugs down it was time to get low for a cargo net crawl followed up by another tri-wall traverse. The band challenge was the last obstacle on this lap and it required athletes to put a thick rubber band around their ankles and hop for a set distance. 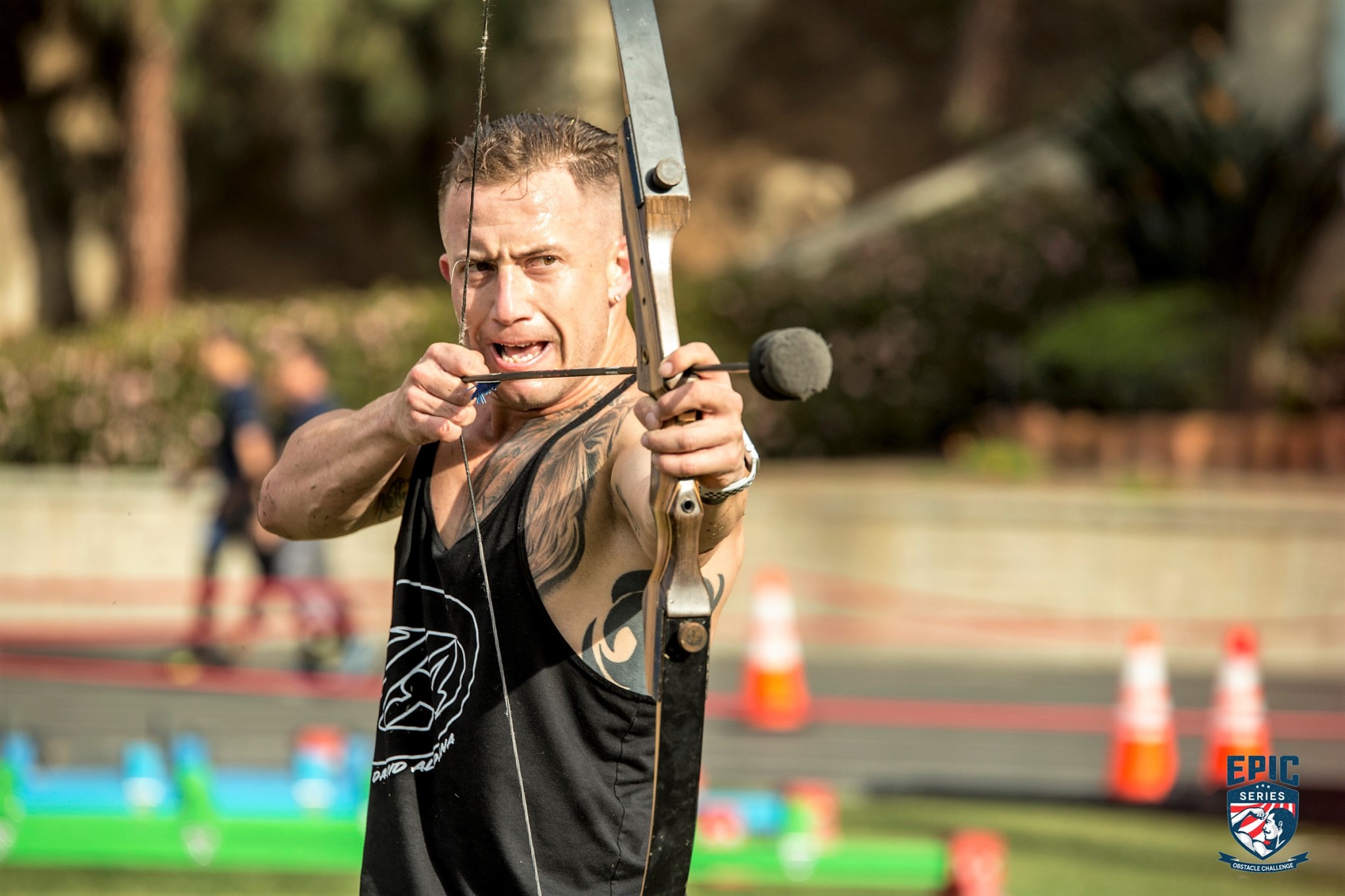 Lap 5. For the next lap Epic kept it simple, just sprint as fast as you can. Finishing up led you to another inverted wall to traverse before climbing up and over Barnaby’s Beast. This was a vertical rock wall where the hand holds became more spaced out the more with the higher difficulty level that you signed up for.

All of this led up to one final lap which proved to be a make or break lap for most people. The final lap required carrying a keg around the course! Now, these were filled to different levels depending on if you ran competitive or open, but I swear mine was filled with lead! 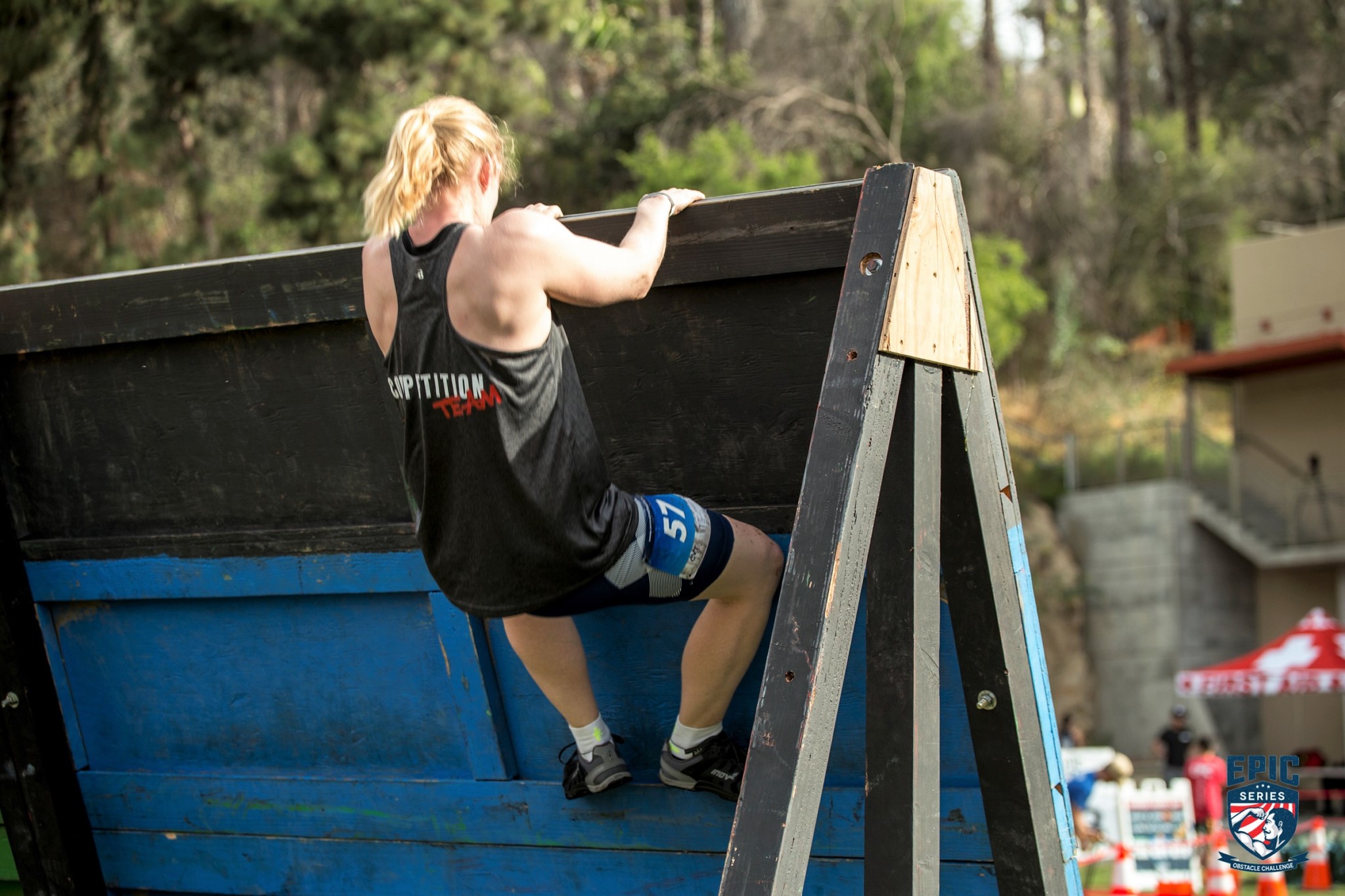 Now, if you ran Open your day was done. Collect your medal and bad ass Clinch Gear shirt and enjoy a Body Armour drink. But if you ran in the Competitive class you could sign up for the Epic Elite short course.

For a few dollars, more men and women could choose from either the Strength or Endurance challenge course for a chance to win even more bling! This course was a great mixture of obstacles, Crossfit, and strength and drew some great crowds to watch the athletes grunt and throw heavy shit around. The list of exercises was the same for both classes with only the weight and reps changing, plus the Endurance class had an added 5 burpees between each station. 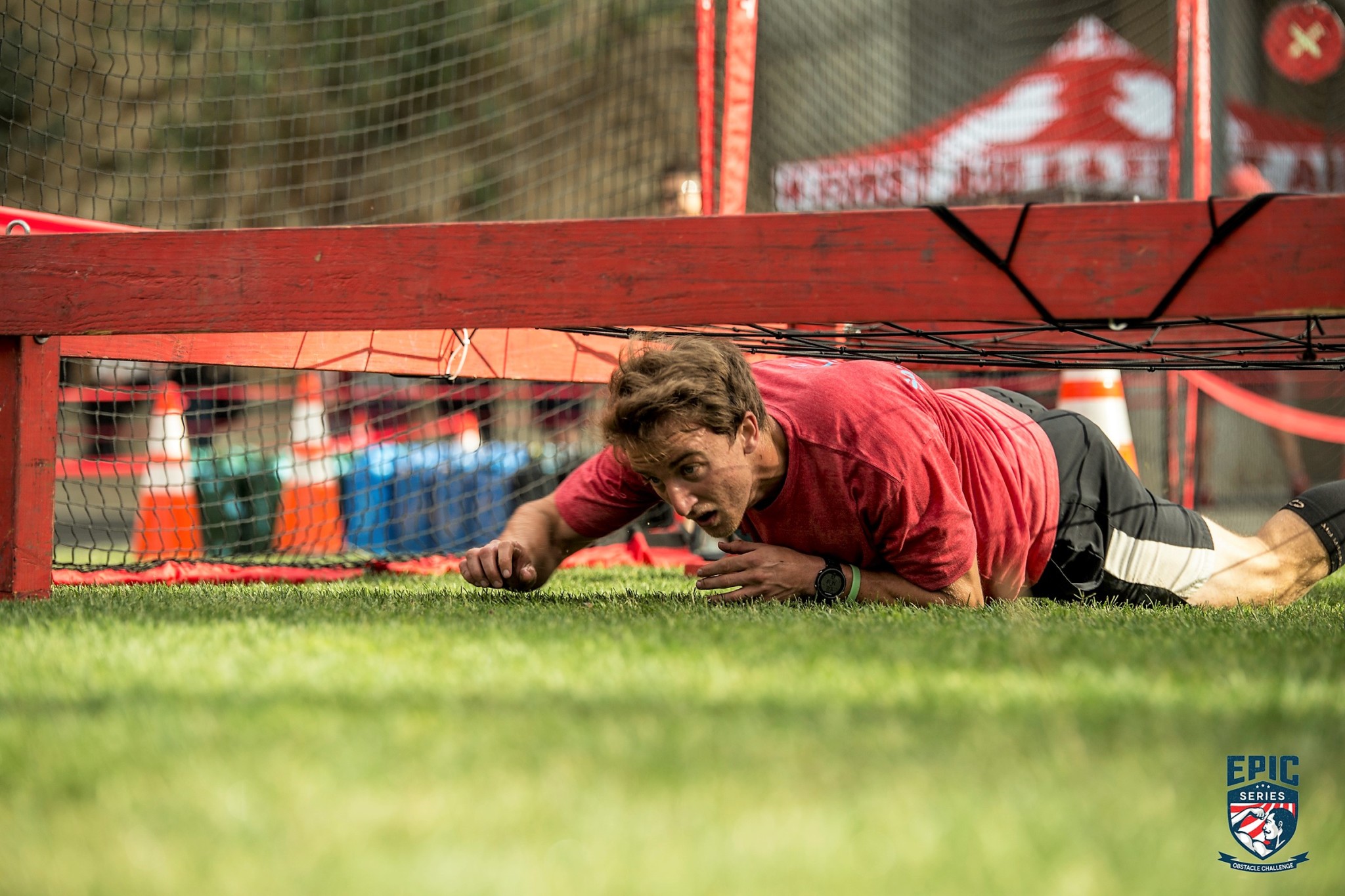 Now there were a few obstacles that happened to be missing from this event that are normally present at every Epic Series due to lack of space on the Police Academy grounds.

The Russian twists and the over under a suspended piece of tubing for a million reps each were gone but not missed by me personally! I found Epic to be an excellent test of one’s overall fitness and that the event offered something for everyone from a fitness newbie to a king of CrossFit.

A kid’s race was also located on-site making this a family-friendly event. Parking and photos were free as was the awesome Southern California scenery. I personally love this series and try to make it out West whenever I can, so maybe it’s time for you to do the same? It’ll be worth the trip I guarantee it and with future events in August in Huntington Beach and a September event in San Diego you still have time to test out how fit you are! 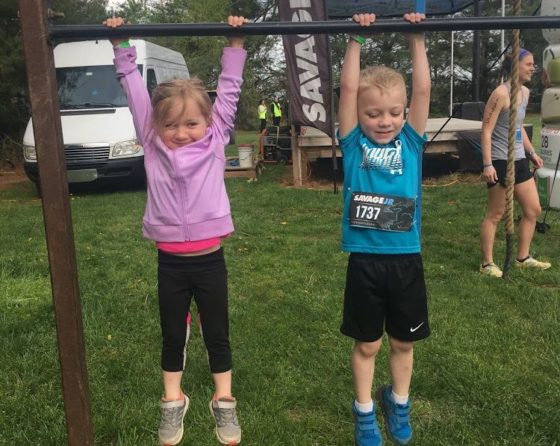 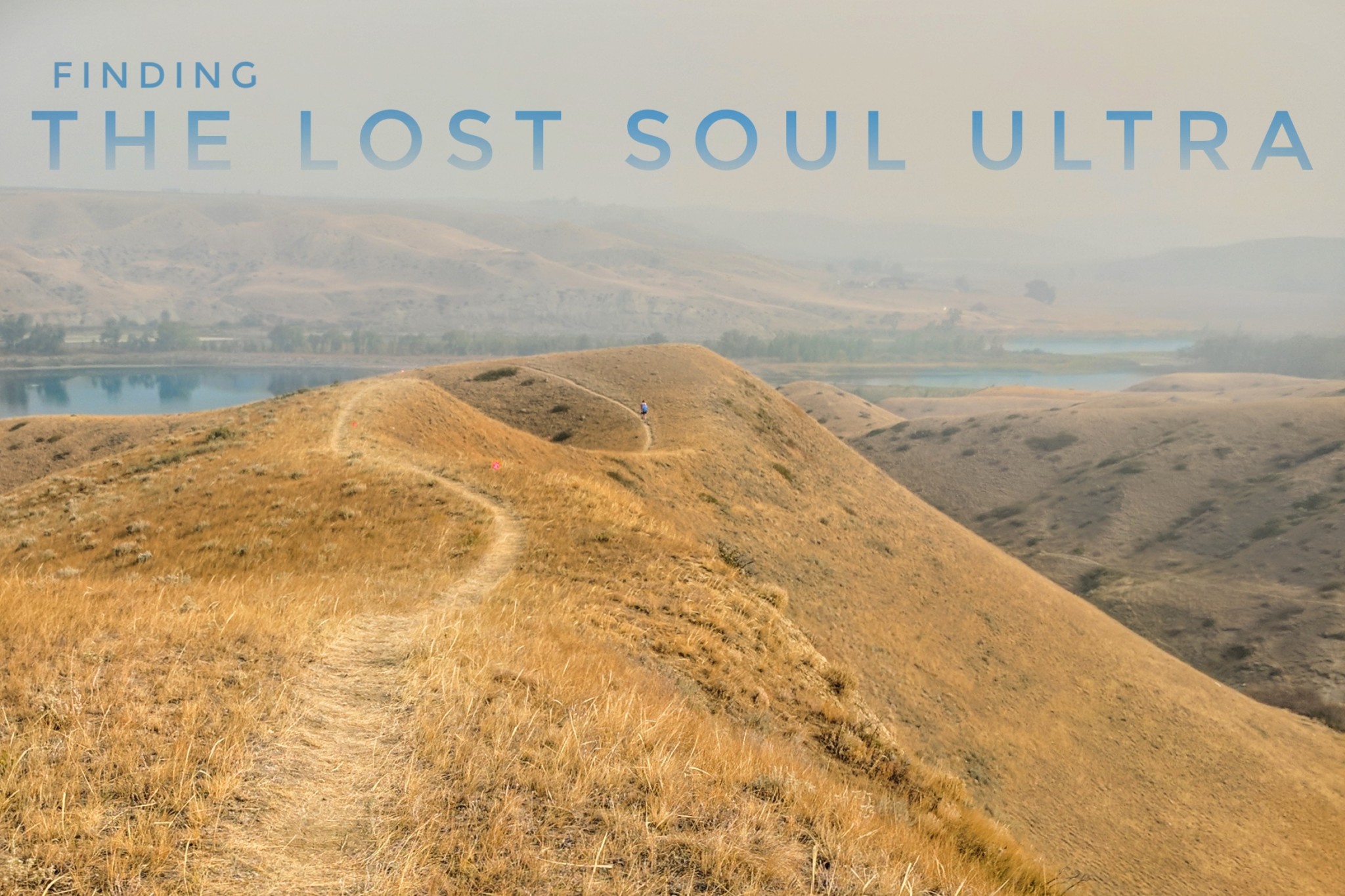