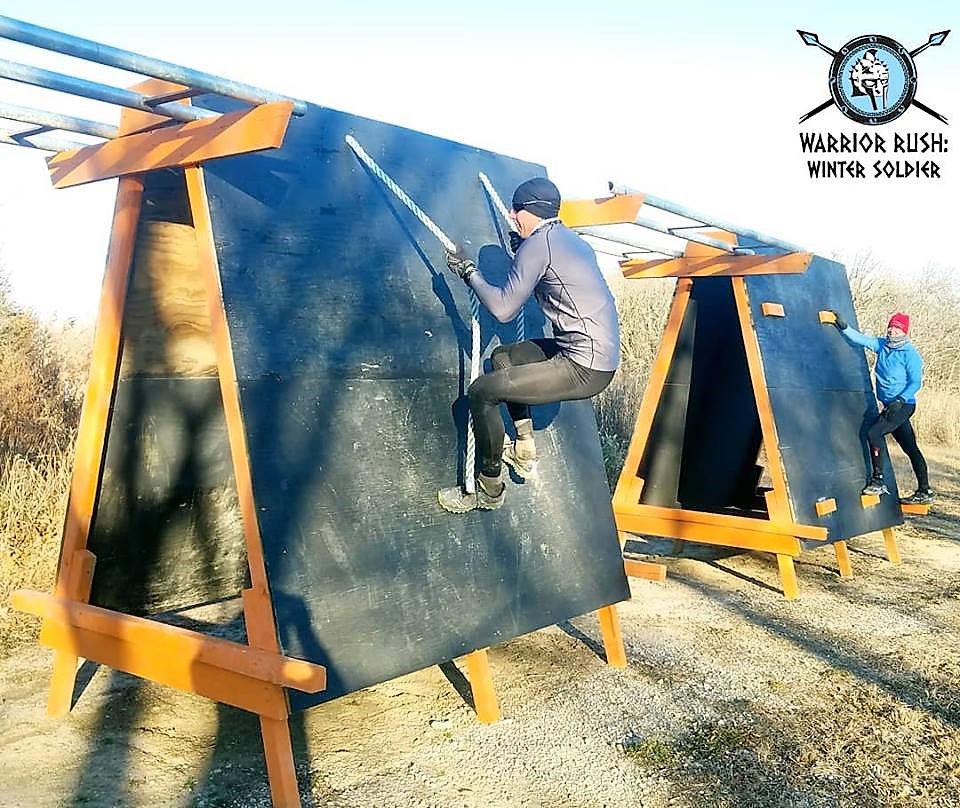 You run OCR events for the obstacles right? How about 50 of them packed into a 5k course? Oh yeah, Dirt Runner pulled this off in their second annual Winter Soldier event held on their permanent course located in Marseilles, Illinois.

Dirt Runner is the former home to the Illinois Spartan and Battlefrog Race Series and is well known for its tough terrain and brutal obstacles. This course truly offered something for everyone with heavy lifts, tons of overhead grip work, brutal low crawls, and seriously technical terrain.

Some of the perks you got racing Winter Soldier at Dirt Runner were free parking, free pictures, and free food and drink afterward. In other words, they don’t nickel and dime you to death like most major races do. Winter Soldier offered an Elite and Open one lap wave, along with an option to get as many laps in as you could in a 3-hour time period for those hearty souls. 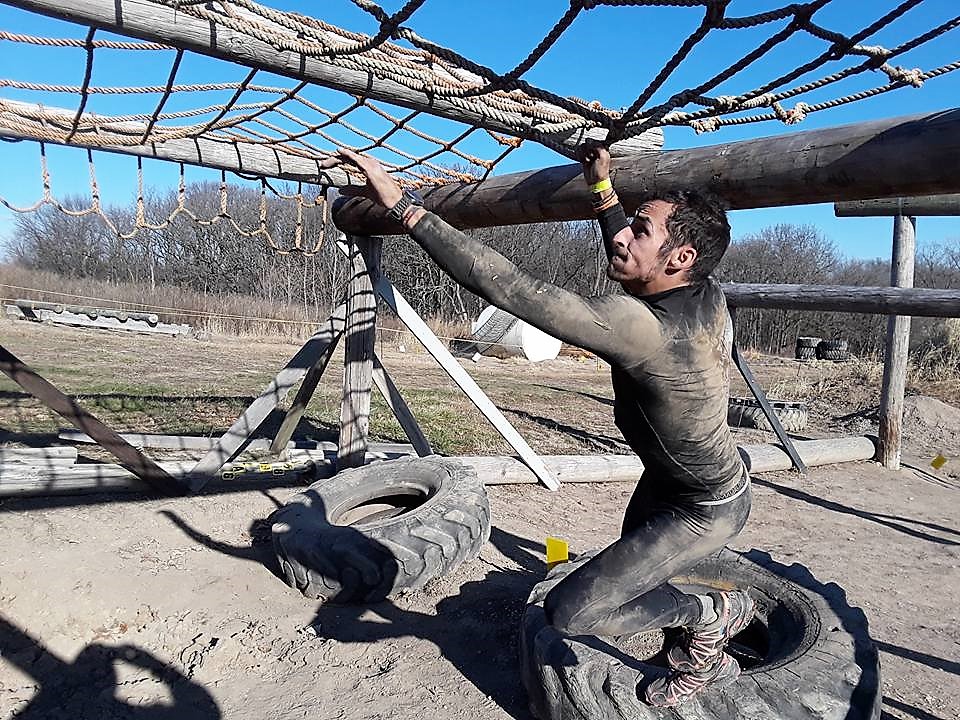 On to the course! With temps hovering around freezing athletes were released from the Dirt Runner festival area with a small fire jump which led out to a trail cut through waist-high prairie grass where a series of wall climbs of varying heights along with a few low crawls thrown in, served to thin out the herd.

Also situated on this section of trail Dirt Runner set up a series of three different weighted carries. You had your normal bucket carry along with a solid cement block carry, formed in those same buckets if you needed a size reference, and finally, dual farmer carries made up of logs with a cloth type handle screwed into them.

Immediately after dropping off your logs it was time to high step through a section of car tires set down on the path leading to another set of 8-foot-high wall climbs. Here the course took a turn into the woods where the trail difficulty increased greatly as the terrain transitioned from running on flat grass to steep hills with uneven footing filled with rocks and tree roots. Some of the obstacles thrown in along this section of the course included monkey bars, a rolling log balance beam, a series of sternum checkers of varying heights, a reversed delta ladder, and a long low crawl through a buried metal tube. 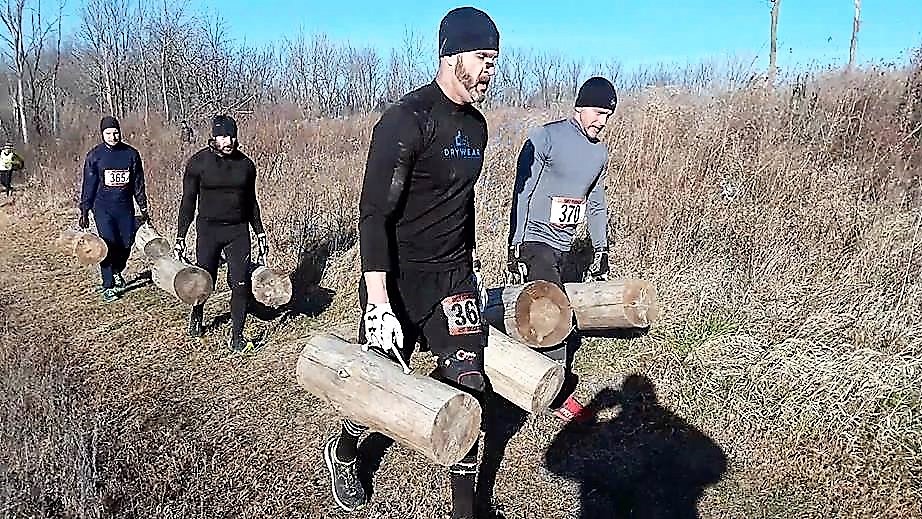 The trail now led racers on a route that circled back into the festival area where Dirt Runner set up a series of obstacles in back to back fashion. The spear throw, Z wall traverse, and traverse ladder climb were all located in an area where friends and family could easily see the action right up close before athletes were once again led back out into the woods.

At this point, the terrain turned into running up and down a series of steep ravines that really drained the legs and taxed the cardiovascular system. Only two obstacles were located in this section of the trail. The tallest cargo net climb I’ve ever come across and a long uphill low crawl through another metal tube. This low crawl was perhaps the toughest I’ve ever had to do. It was super long. There was very little clearance inside the tube, the mud inside was frozen solid killing the elbows and knees with each forward movement, and the climbing angle was about 45 degrees going up. After finally getting out of that damn tube it was back to the steep ravine climbs until the course opened back at the festival area where a gauntlet of final obstacles was waiting. 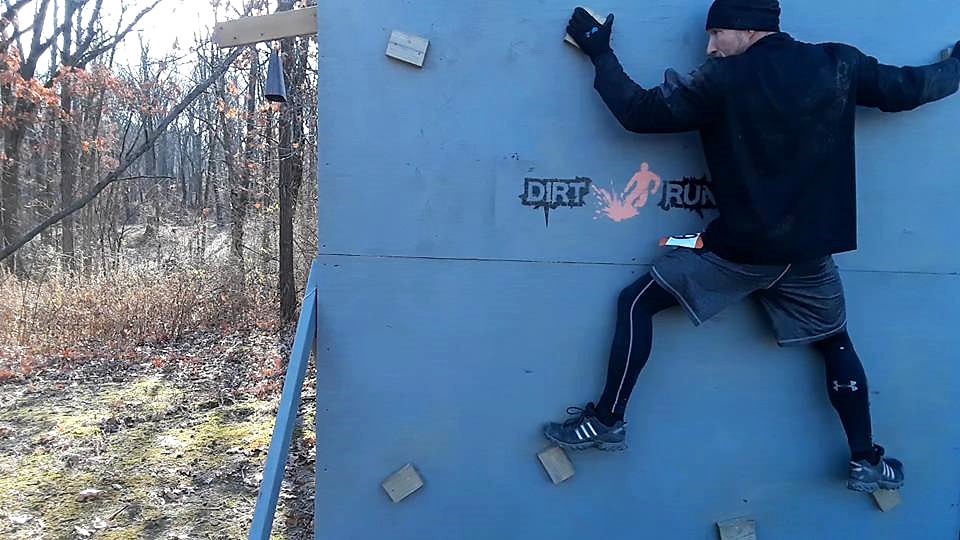 The Gauntlet: Situated on the outskirts of the festival area with very little distance in between each task this final section of the race was draining both physically, and mentally. All while friends, family, and fellow athletes watched close by.

Starting off was a set of two delta ladders and two inverted wall climbs leading right into a semi tire flip and carry, down and back twice over a twenty-yard distance. A jump and hop up and over a set of stacked tractor tires was next up followed by Dirt Runners version of the weaver. Connected to the weaver was a cargo net climb over an enormous plastic container which led to a low crawl under a set of horizontal logs.

A high-step through more car tires led to a unique wall traverse. This wall traverse was set up in three sections connected by long poles on the top. So, after you made it across a section of wall you had to shimmy your way across a pipe to the next section of wall and so on. Each wall segment had a different configuration of ropes or pegs to traverse across. Skill and planning were required to navigate this obstacle along with a serious amount of grip strength.

A hundred yards away Atlas Stones were set up for a down and back push with another set of low crawls waiting after you finished. A climb over the famous Dirt Runner slip wall followed by another climb up the equally famous fortress of logs put you on top of a hill within view of the finish line. But not before a rope climb, a cargo net traverse, a barbed wire crawl, and an Atlas Stone/semi-tire drag and carry were completed. 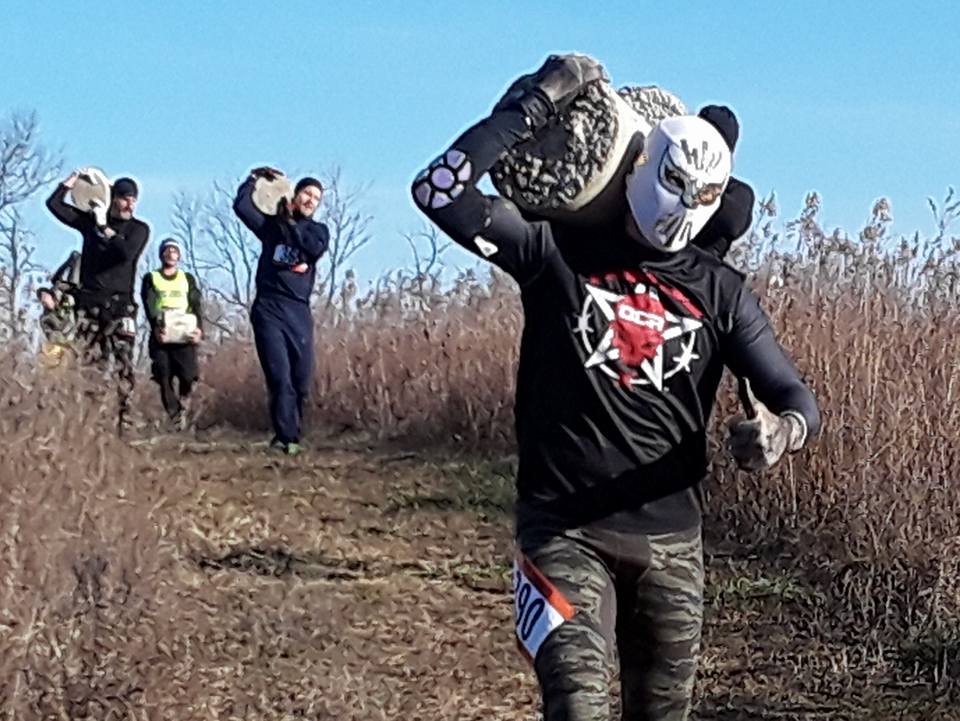 I found this race to be fast and furious with something new seemingly around every corner leaving me totally spent at the end. Winter OCR events have become more popular every year with good reason. It adds another level of difficulty to racing.

Ok, you can fly through a course when it’s 80 degrees out but how about when temps drop below freezing? Dirt Runner offers some of the toughest races and events in the Midwest and I found Winter Soldier to be right on par with the rest of their events. Obstacle heavy, low cost, and a great feeling of accomplishment can always be found here. So, put one of the 2018 Dirt Runner events on your schedule!

Congratulations to everyone who ran UltraVirus II – 379 people completed at least one, 5 mile lap. There… 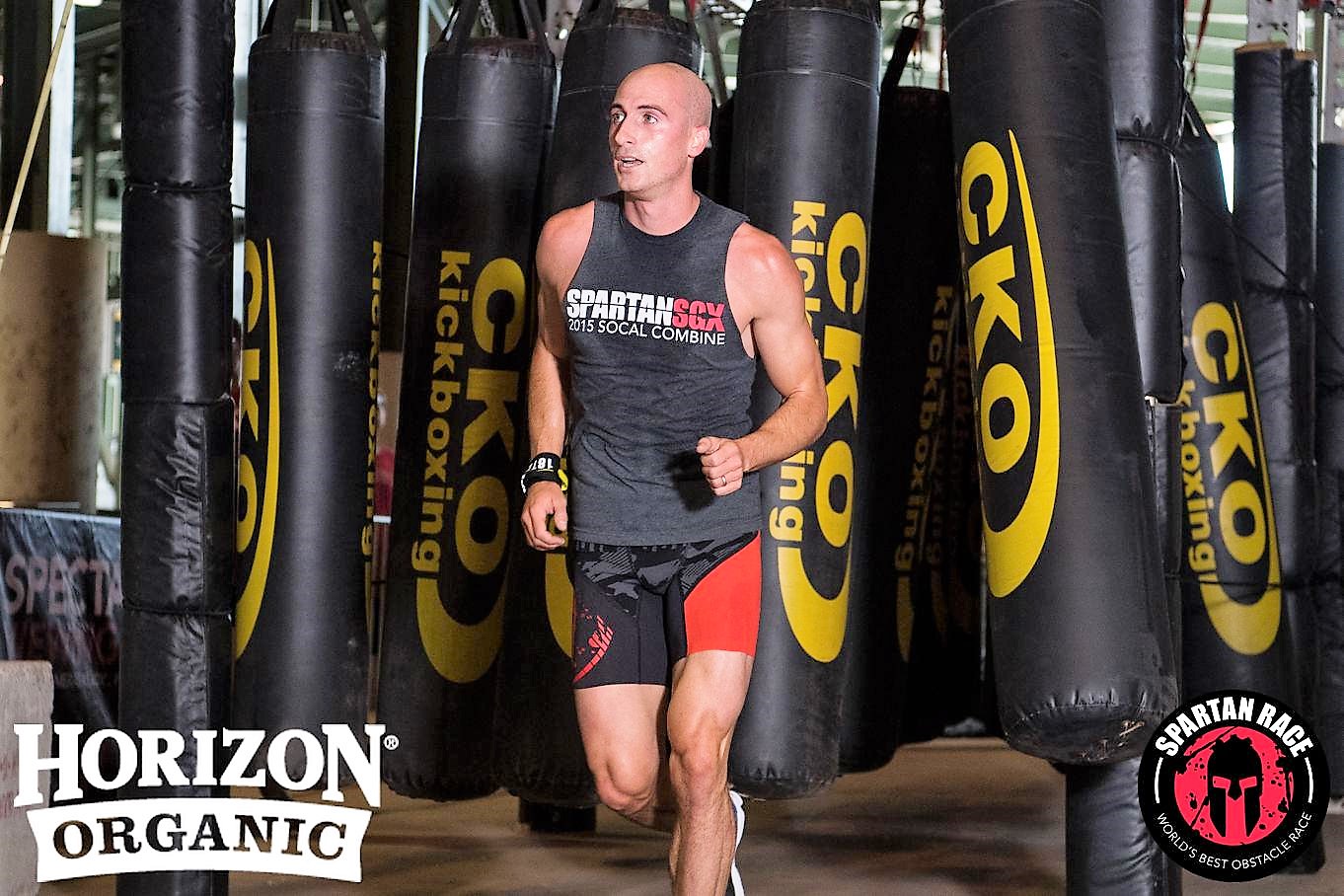 How would you like to race at the stadium where the Ice Bowl was played? Or where Brett… 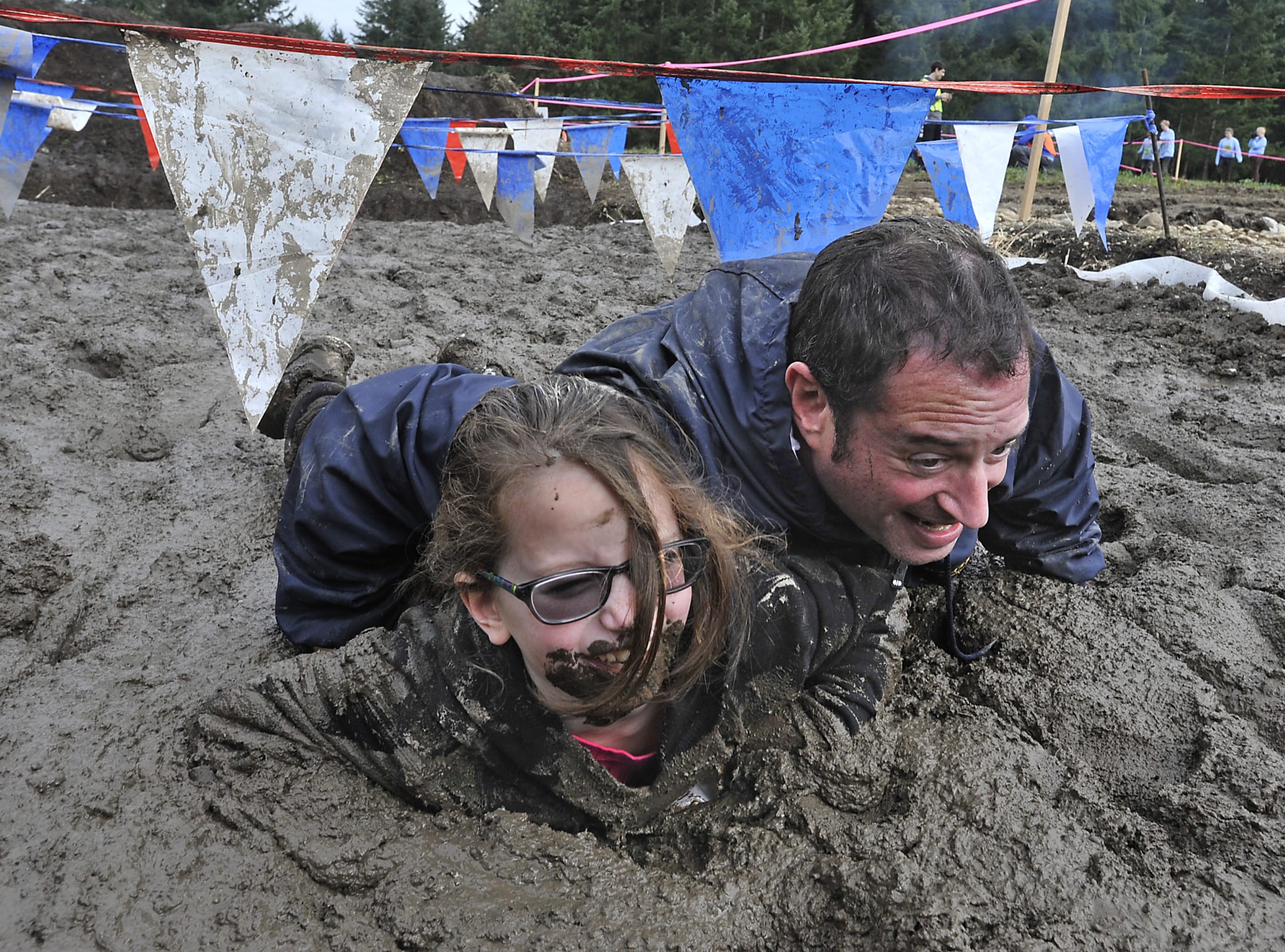