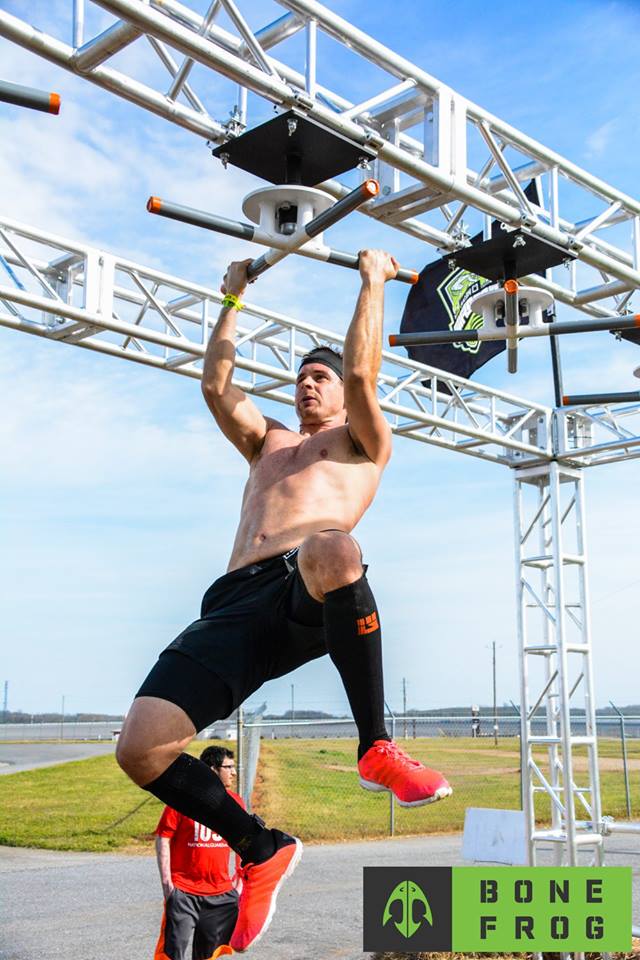 HESCO BoneFrog launched its second race of the year on March 25th in a location very well known for speed. Talladega Speedway in Alabama was the host site for the Navy SEAL owned and operated event, and while there was no Ricky Bobby, there was a Coach Pain! The weather was perfect for racing, partly sunny skies and temps in the 70’s made this brutal suckfest a little bit more tolerable. 10 dollars for parking got you under the tunnel and onto the racetrack infield where the festival area and start was located along with a few of the actual obstacles making picture taking ideal. The volunteers were all friendly and fast which made the check in a breeze.  Also, located in the infield area were bathroom and shower buildings which is a major upgrade over the usual port a potty thing. Bonefrog offers three different race distances for an athlete to choose from. The sprint, challenge, and a combination of both called Tier 1. After running BoneFrog’s first race earlier in the year at Orlando I was thrilled to be asked to cover their second race of the year for one big reason, new obstacles had been added and I wanted a crack at them! 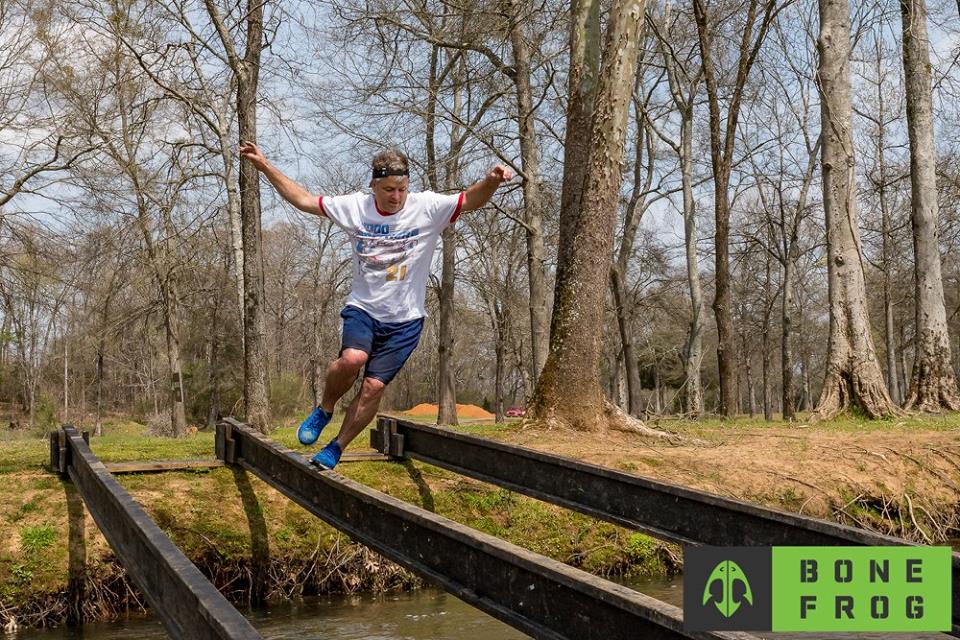 BoneFrog started us off with a jog through the racetrack infield which really was a massive amount of land to cover and served the purpose of thinning out the crowd before we hit the first obstacle called the siege wall and could best be described as a slip wall with a rope minus the slip. A short distance away was one of my favorite obstacles called rolling thunder. This unique obstacle is series of tires strung together about 5 feet off the ground. Now this might look easy till you jump up on the tires and they spin you back to the ground! This was a killer obstacle for the shorter athlete. Now winding our way towards the open end of the infield we came upon the mouse holes, which is kind of like BoneFrog’s version of over, under, and through. One last infield obstacle, a rope swing over a water pool was in a racers path before finding a water station on our way outside the track. Once outside the track area racers were led up to a 60-degree inverted wall and the new first phase wall {think Battlefrog Delta ladder}. BoneFrog now led us along a grassy trail along the back side of the track where the low crawl was located along with a ring handled traverse suspended off the ground called the swingers club. Grip strength body control really came into play here! BoneFrog is big on its suspended traverse rigs, so work that grip hard before you race your next event with them! Athletes were then led back into the stadium where BoneFrog really used the track stairs to their advantage. The sand bag pulley pull obstacle called dead weight was located here and who could think of running stairs without taking anything with them on the trip? Wreck bags were lined up to be carried up and down the stadium stairs for what seemed like forever.  After dropping off our bags we were led again back outside of the stadium area and on to another BoneFrog suspended traverse called get a grip. This was another series of ring type holds suspended quite a way above the ground and proved to be an area where many elite division athletes were “held” up. 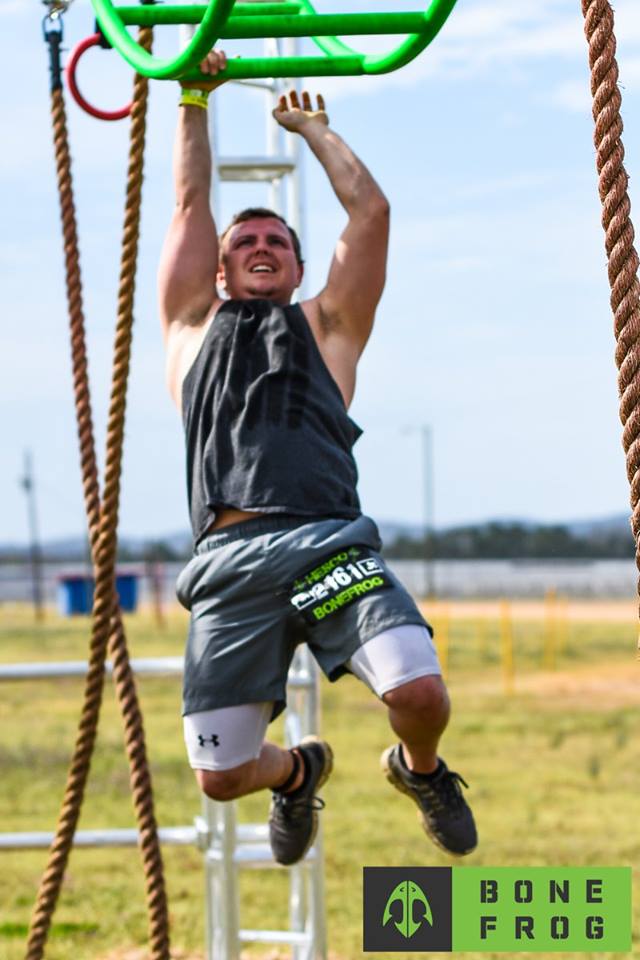 Now racers were led through a section of wooded trail where a series of walls awaited us. Hells gate, a series of five walls increasing in height, then decreasing again was the first wall obstacle followed up by the Irish tables which was a saw horse type structure about 7 feet high! Another aid station was located here at the tables then we set off on again through a thickly wooded section of trail where Bonefrog took advantage of the creek to place their balance beam. Yes, the balance beam was set right over the water and caused an awful lot of wet feet. Now with our shoes soaked we ran along the creek to a burpee fest called 31 heroes. Here each racer called out the name of a fallen soldier before doing a burpee and this totaled 31 burpees. Now winding our way back to the racetrack, we encountered a 9-foot wall to climb then were led back onto some pavement for a tire drag. Bonefrog now led racers up a set of stairs and down to another inverted wall before having us climb up the steep embankment to the top of the track, only to have us slide back down a short distance later. 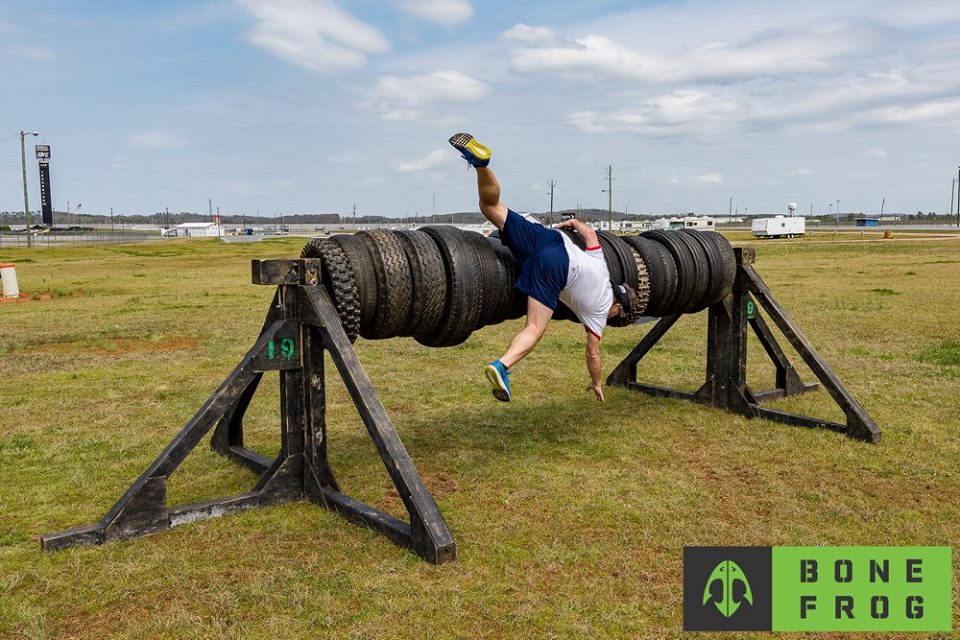 A low crawl under netting was the last obstacle racers encountered outside the stadium as we were now led through another tunnel and back to the track infield for the last section of the race. A vertical cargo net climb was our first infield obstacle followed up a short distance away by a new rig developed by Bonefrog which used the normal ropes and rings along with a jungle gym type sway bar in the middle. Right after this obstacle was another new Bonefrog traverse called the choppa. Think of it like Savage Races wheel world but with only the spokes. It was a new and difficult obstacle I personally found to be extremely fun! Now getting close to the finish racers were thrown another traverse called the drunken monkey. This was a series of pegs staggered on both sides of a wooden 2 x 12 and was perhaps 30 feet long. Two Bonefrog staples were next up with the rope climb and the ever-popular dirty name. If you’ve never slammed your body into a log suspended in the air you simply must try it once! Now out of breath, either from the running or the slam into the log, an athlete had one last rope climb/monkey bar setup called black ops before one last low crawl to the finish! 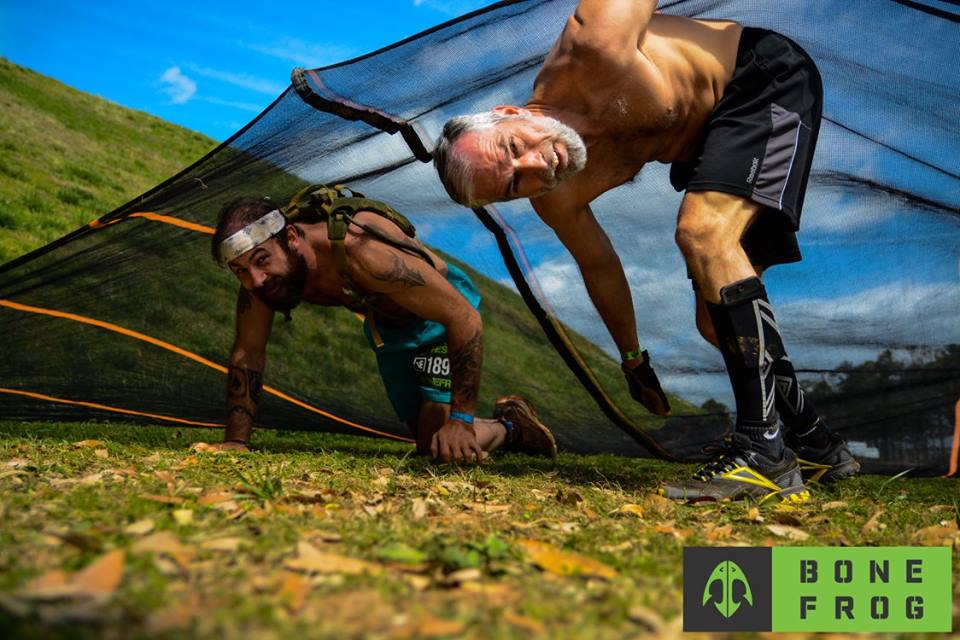 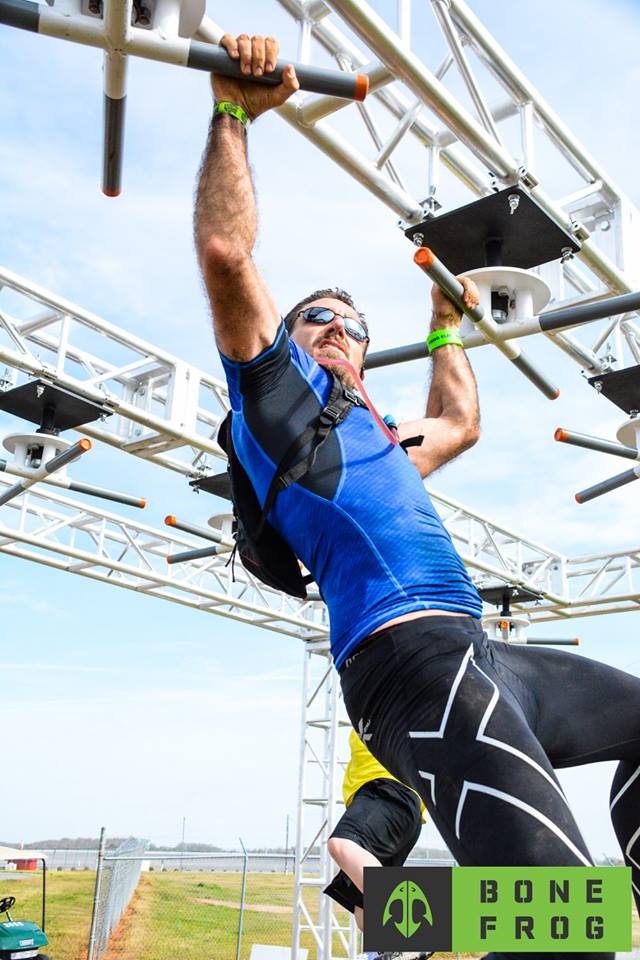 I found this BoneFrog race to be a great mixture of distance running, 11.5 miles for Tier 1, 8.5 miles for challenge, and 3.5 miles for the sprint, and bad ass obstacles. The new choppa was a blast to play on along with the new BoneFrog rig. With some other race series becoming easier to better fit the weekend warrior athlete it’s great to see BoneFrog getting tougher. What else would you expect from a series run by Navy SEALs right? Photos were free and of great quality and the race bling was top notch. The kids course could use a little work but kiddies could run it as many times as they wanted. There could have been a few more food and drink vendors on hand but the warm showers made up for that in my book. So, check out their next event in Austin Texas on April 29 for a real test of your fitness level! 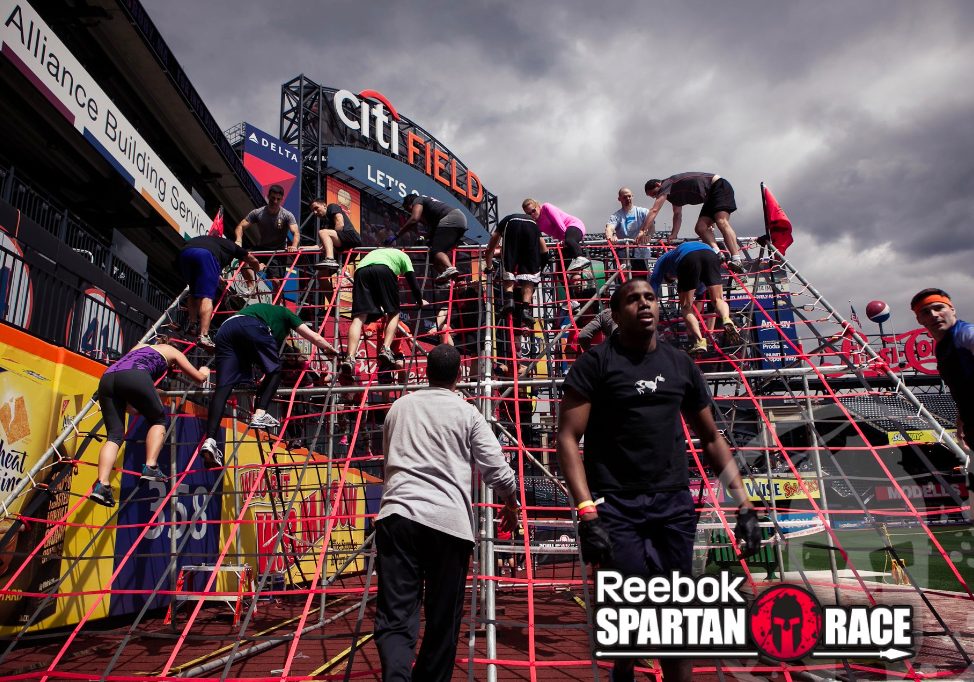 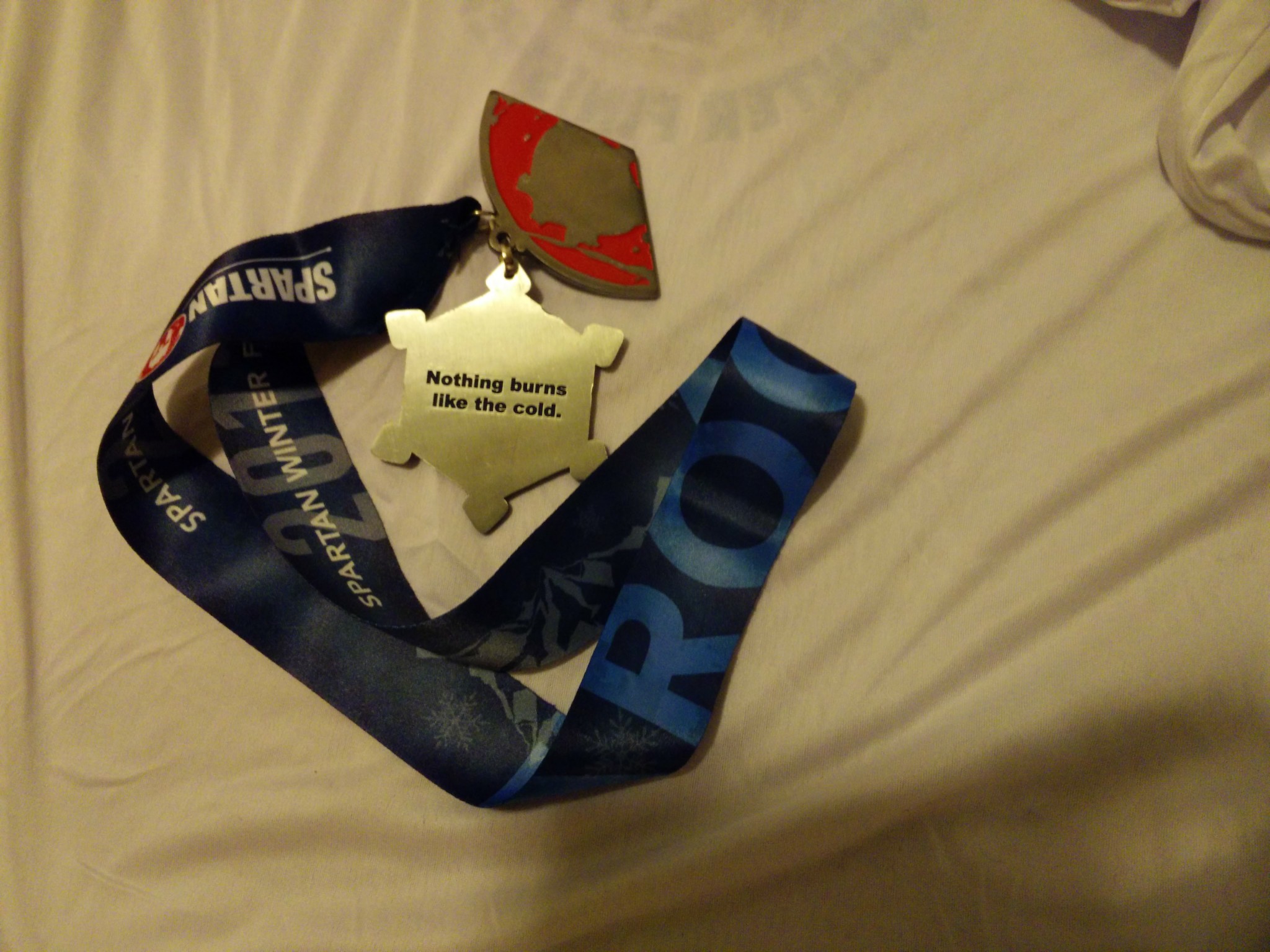 Be careful what you wish for. Last year I grumbled that the heat at the Tri-State Spartan Sprint… 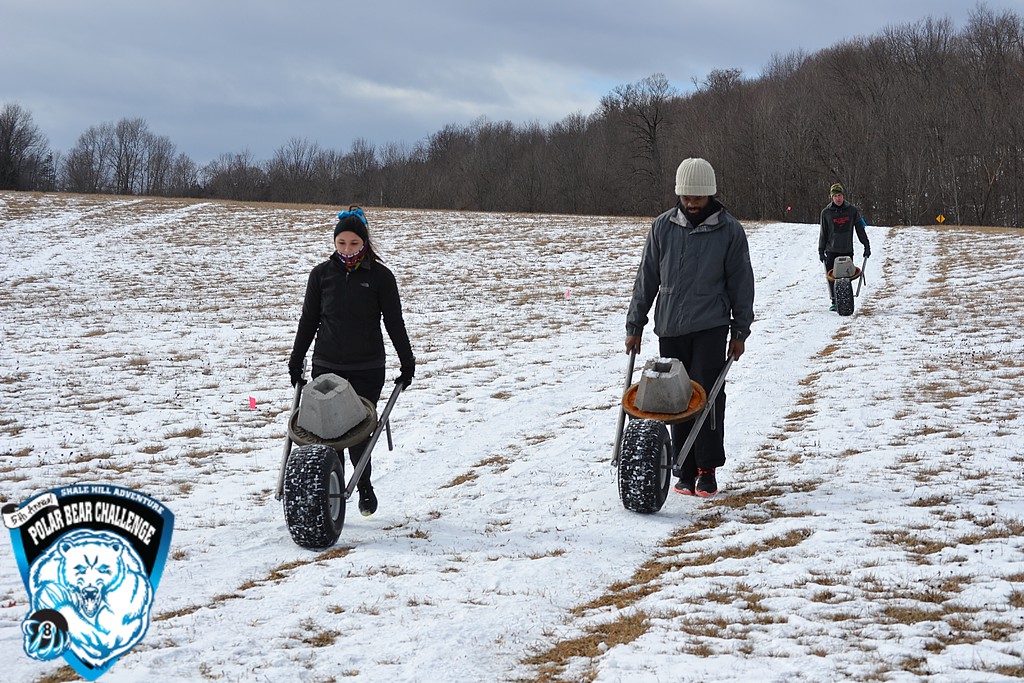