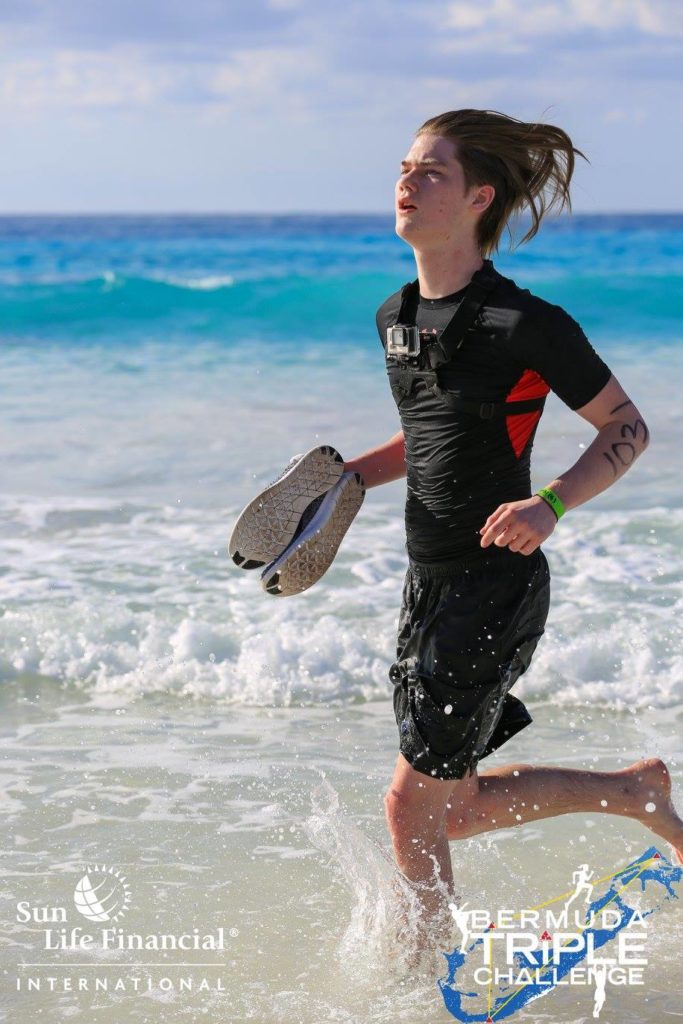 Arriving to Bermuda was like falling into a dream. It’s a picturesque paradise lined with whispering palms, white sand beaches, and water like glass. Its so fucking beautiful there.  Not to mention that Matt and I traveled ALONE,  without kids hanging on our legs, or punching each other in the face. No noise. No chaos. No fighting. No crying. I think it was the first time in years I had any consecutive days without someone crying.

Honestly, I was in no mood to race. I saw the beach and wanted to lay there for four days straight. Maybe not even eat, just lay there.

I had to keep mentally preparing myself. There were 3 races, so it was the perfect “race-cation”. Friday night was the Argus Urban Footrace, staged all around the town of St. George’s. The race distance was between 2 and 3 miles. The roads were so narrow and windy, and hilly. Just picture running in a european beach town. The streets were filled with pops of color, wild flowers, salty air, and quaint cottages. In between were 33 obstacles , yes I  said 33, on the streets of Bermuda. I’m pretty sure they don’t regulate obstacles there. The guys thought, “That would be cool”, and they just made it. 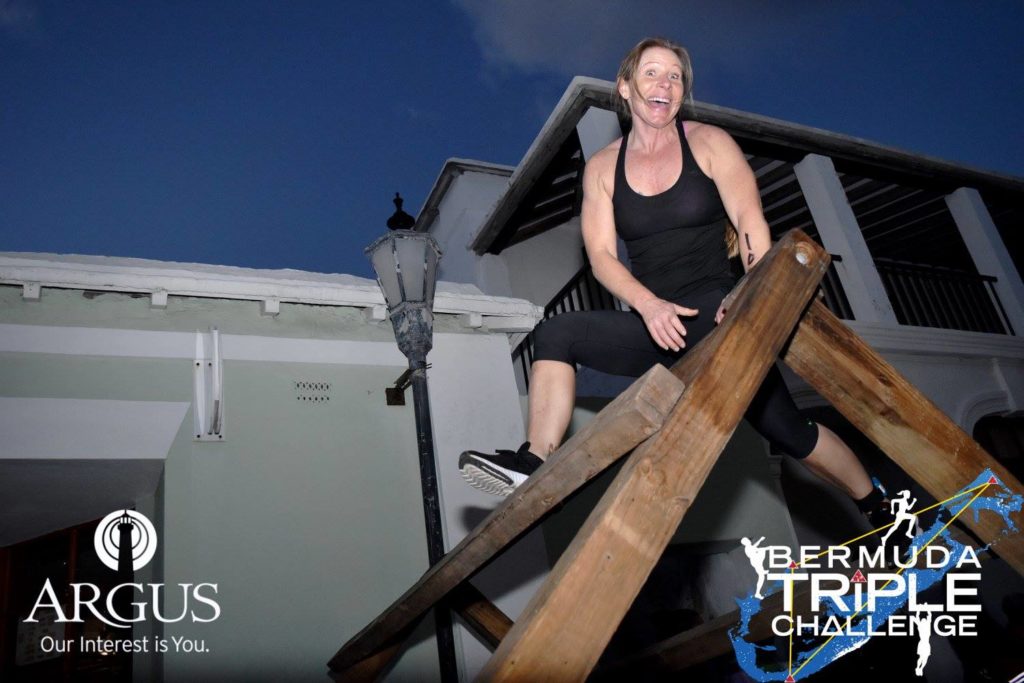 At one point I climbed over rope net that was draped over a fucking BUS. Just a bus sitting in the middle of this course with people climbing over it. Not to mention that the net was slipping most of the way down but no big deal.  Then we jumped over cars. Literally jumped on the hoods of two cars and then into the back seat of a van and through the windows of a random four door car. It was like Dukes of Hazard turned into an obstacle. Meanwhile, there was no mud, just friendly volunteers in army fatigues saying “this way” and giving commands in Bermudian accents. Lots and lots of walls and container climbs. The spider web was a mass of tangled ropes and Im pretty sure it could’ve caused some serious rope injuries but no one seemed phased. As the sun set, it started to get chilly. we approached a hill and had to tie our ankles and jump up the hill, it was harder than you think. Following looking like a complete idiot with tied ankles, we had to then bear crawl down a huge hill. 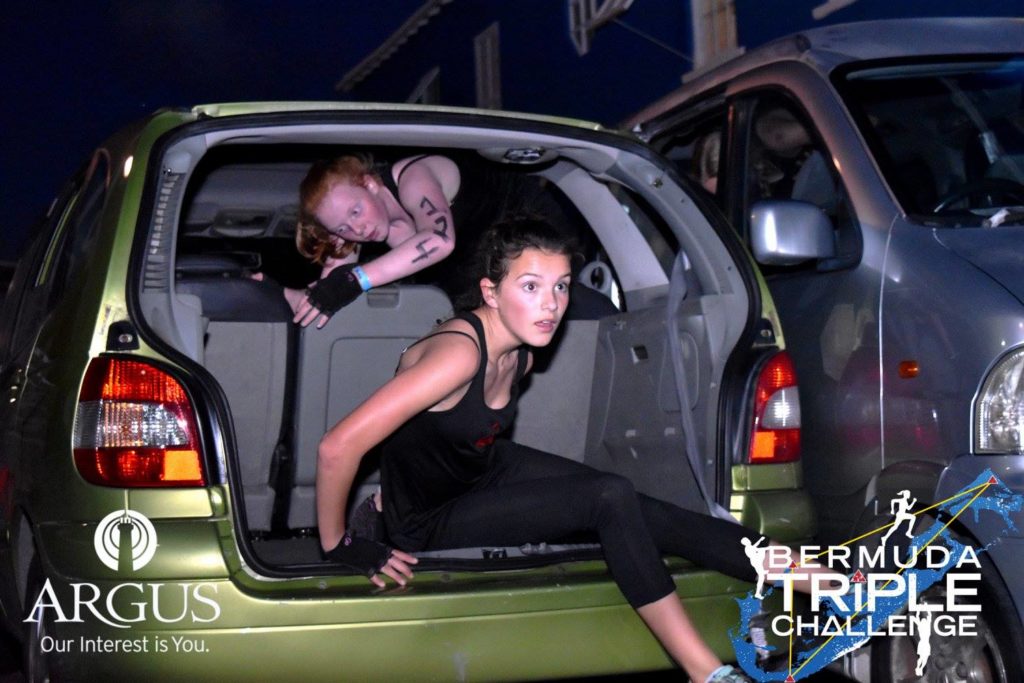 This was not an easy race. Finally we got to the rope climb, then there was run along the wall of the ocean. I guess you could say it was like running on a glorified curb with a 15 foot drop to the sea in the dark. “Holy Shit! I can’t see!” I said to Matt. Mostly pretending I wasn’t thinking about how easily I could miss a step and just fall into the ocean. Laughing to Matt I said,” I hope I don’t fall in and DIE.”  Did anyone think of that? Maybe, maybe not, but possibly another exciting pro to doing a true grass roots race. No frills, no bullshit, nothing fancy at all, but a whole lot of great.

Race #2, The Sun Life Island Challenge, was absolutely stunning. We raced on the South Shore Beaches, which are some of most beautiful beaches I have ever seen. Running on the beach was fantastic, the grains of sand in my shoes were so much better than mud. I LOVED the sand. One obstacle was crossing the ocean for about 500 feet. The water was so clear and crisp, it was amazing. 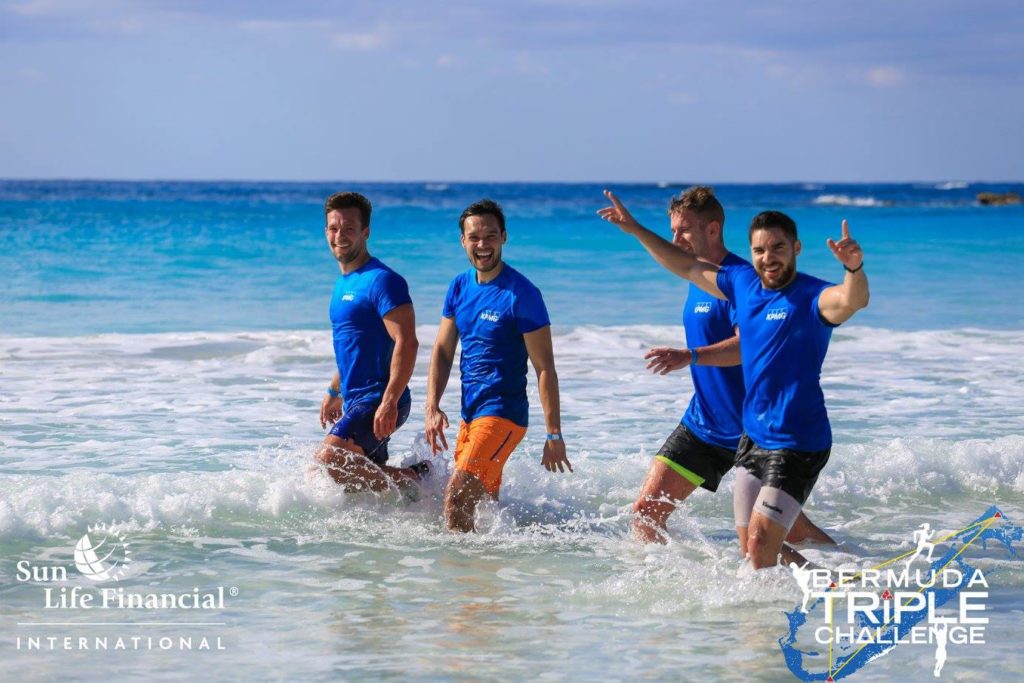 The sand hills were not easy, trudging up a hill sticking in the sand AND carrying weight was tough. Although looking at the vast blue ocean and swaying trees in the breeze was so relaxing.  At one point, we filled the sand bags ourselves, a truly sustainable moment. The elements were so kind and breath taking. It was like the best of both worlds. The obstacles were challenges, with moments of “Holy Shit this is Amazing.” throughout the course. There were some barb wire crawls that nearly killed me because the sand made it a true crawl. I did say “FUCK THAT!” when I came up to the 25 foot “Assault” wall. That was the highest wall I’ve seen. Probably not, but I just couldn’t get the nerve. I did some burpees and moved on. Being on that beach kinda felt like being on survivor, except there was an end in sight with food and Gatorade. 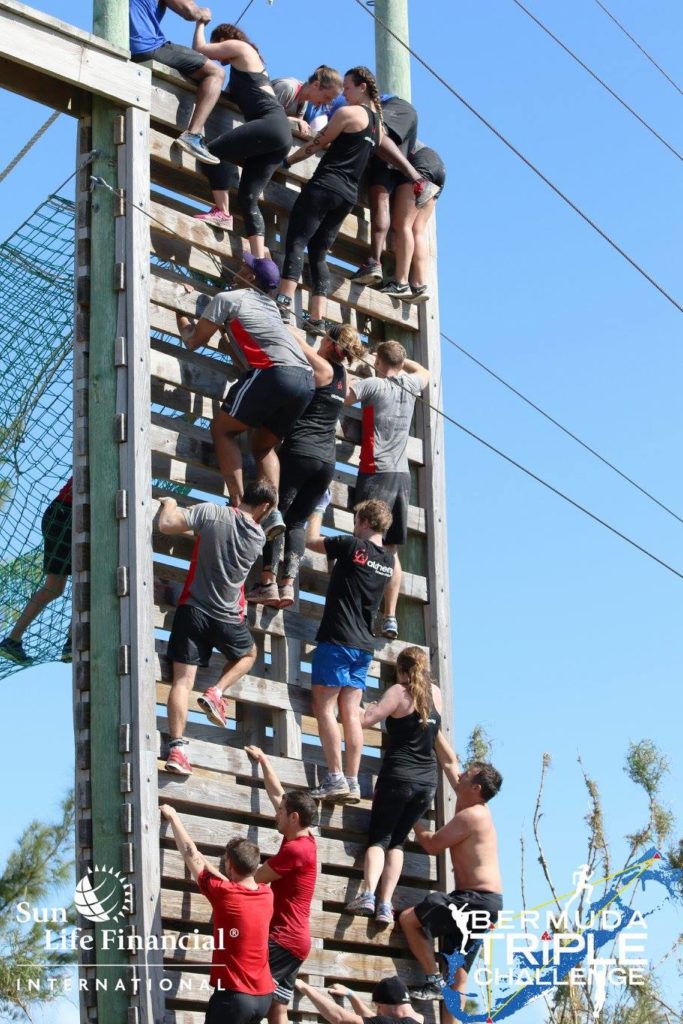 Race #3, The Chubb Royal Challenge, was seriously insane. It took place in the Royal Navy Dockyards, and was so insanely fun. I’m pretty sure Joe Desena himself would be pleased with his competition. Imagine Spartan Race meets an island with an adventure water park. It all started with a swim, and not just any swim. It was on the colder side that morning. There was a chilly breeze and the sun was barely peaking out, so the ocean was freezing. It was at a dock yard with an old abandoned prison on the grounds. We ran out to a wall off the ocean that was about 15 feet high and it was a jump and swim. A rescue boat floated beside the swimmers as they moved as fast as fucking possible swimming about 500 feet. They made an announcement at the beginning of the race to let people know that if you could not swim, DO NOT do the jump and swim. Maybe that’s why they had no life jackets, or maybe the boat was just one big life jacket for all. Many of us skipped the swim and did burpees. Yes I skipped the swim, but I had to do Instagram for ORM. 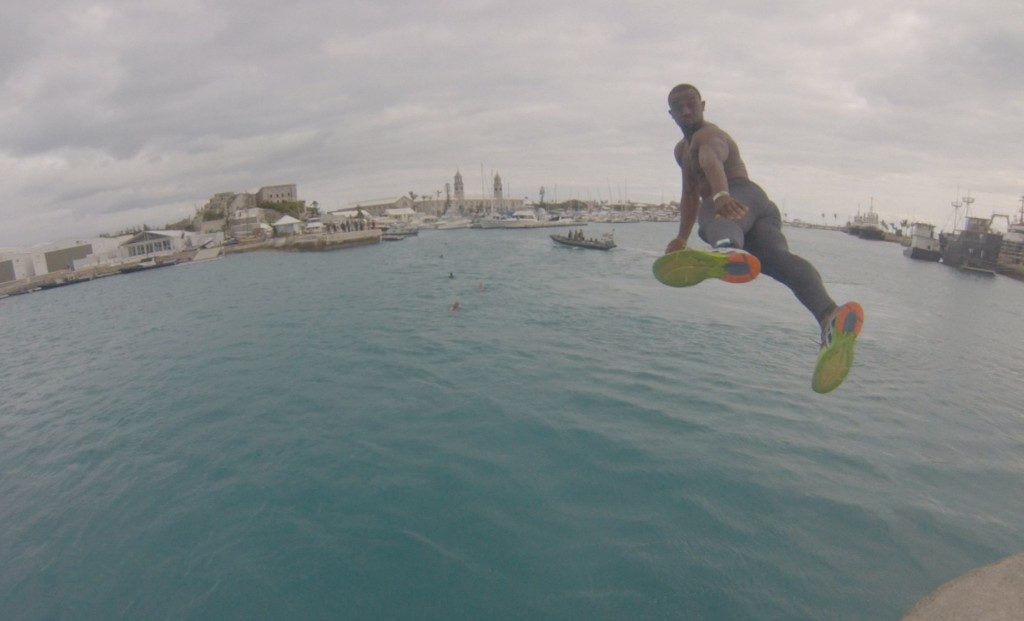 This was the hardest race of the three because it had so many water obstacles. There were 23 obstacles. Some were log carry, spear throw and Tarzan swing. At one point on the course there were sheep meandering around amongst the racers. Damn, I wish I got a picture of that. The zip line was pretty epic, and I was too big of a chicken shit to do it. Also I was doing Instagram for ORM, what would i have done with my phone? There stood the red dumpster with the cargo net to climb up and grab the zip line. People were flying over the ocean, it was awesome. 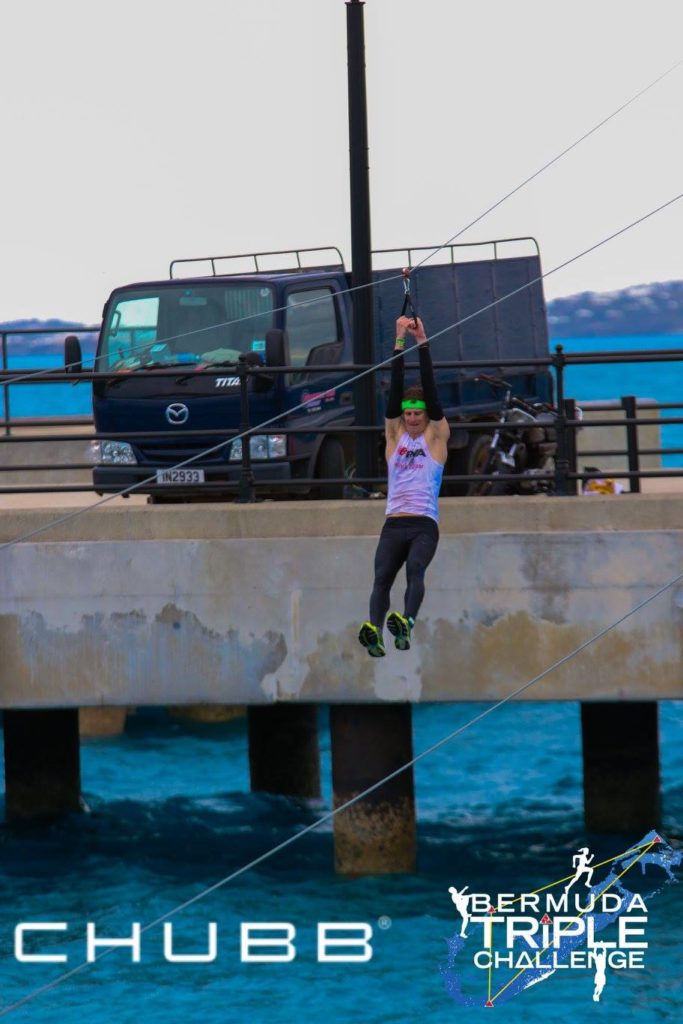 OH MY GOD, I almost forgot. There was a rope traverse that stretched across the ocean from wall to wall of the dock. It was a long way across and people were falling in left and right. Then there were a few guys and chicks that absolutely killed it, watching them perfect the balancing act with the ocean backdrop was amazing. The prison was eerie and beautiful and the view from the top was of the vast ocean and blue sky. Racers ran through disheveled stone doorways and skipped down terrifyingly narrow stairs. The stairs and doorways were obstacles in themselves. When you got to the roof there were volunteers holding flash cards with math problems on them and you had to get the correct answer or do burpees. This race had a great finale. There was a huge free spread of delicious food at the finish, and a beautiful, grassy place to gather with tables and seating everywhere. 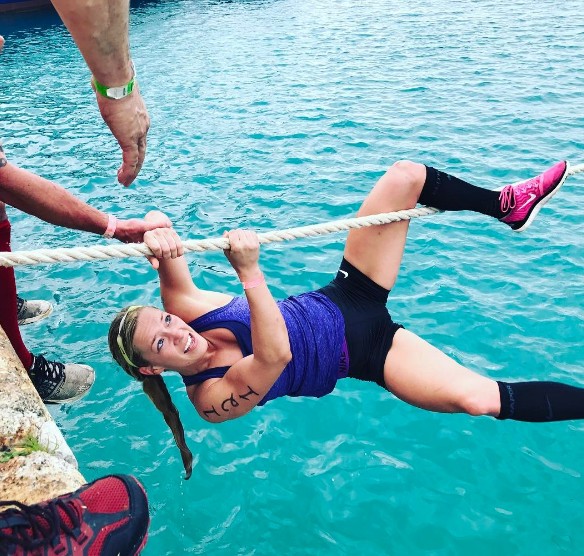 Bermuda Triple Challenge wasn’t a race. It was an adventure filled with heart and true beauty. It was a vacation with unexpected challenges and a great community of kind people. I will definitely be back, with my husband, and without my kids.

Register for the next event at bdatriplechallenge.com

Josh and Matt Get Down

OCR and Crossfit, Crossfit and OCR. The two seem to go hand in hand as many OCR types… 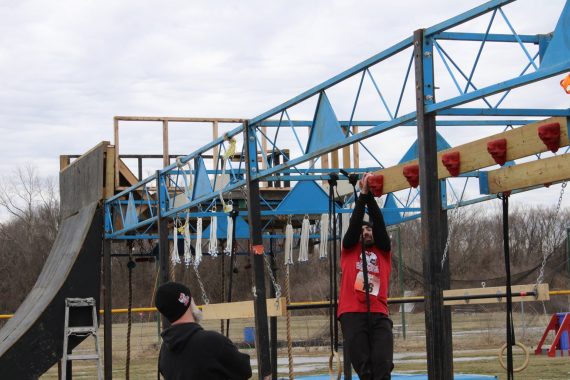 We all compete in OCR because of the obstacles, right? If not, we’d all be signing up for… 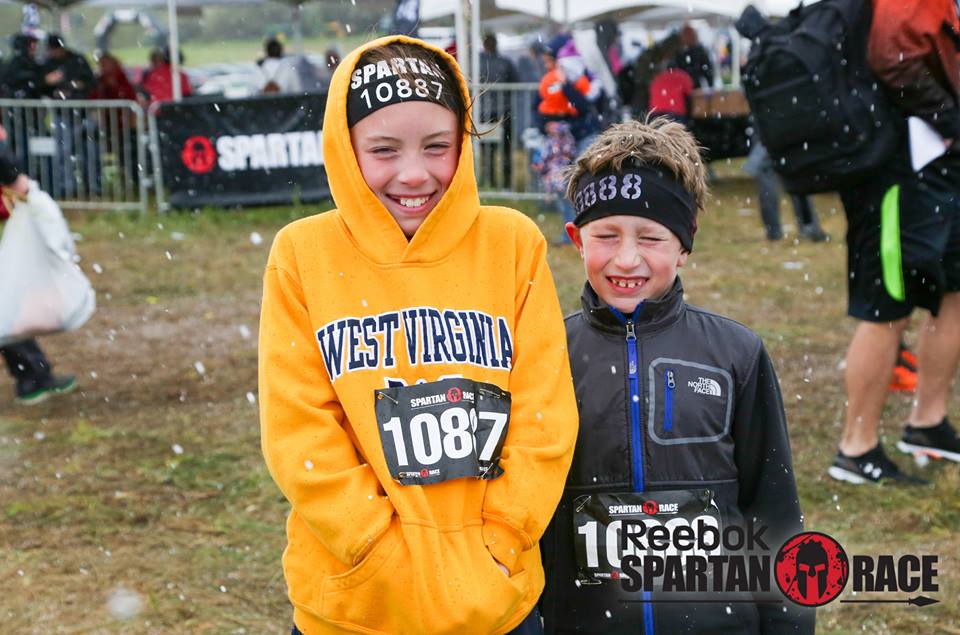