Tough Mudder has released details about the new obstacles for 2017, and it is clear that they will keep Tough Mudders wet, disoriented, and dangling in midair. Which is how Tough Mudder likes it.

Most of these obstacles will debut at World’s Toughest Mudder, which takes place this weekend outside Las Vegas, and those who are curious are bound to get glimpses of the new obstacles during the copious live feeds that will be broadcast.

In the meantime, you can also see many of the obstacles in this dramatic video:

Once you have picked your jaw up off the floor, you might want to know more about the individual obstacles you just saw. The most impressive is called Augustus Gloop. Why is that name familiar? If Johnny Depp is your WIlly Wonka, then you will remember this:

However, if you go old school Gene Wilder, try this instead.

Sadly, this obstacle does not involve a river of chocolate. Rather, Mudders will climb up a tube while water rushes down at them. I spoke to obstacle designer Eli Hutchison, who explained that while the tube itself will not be difficult to climb, the force of the water flowing down will make it feel like you can’t breathe. “Just keep your head down”, he advised. Thanks, Eli. 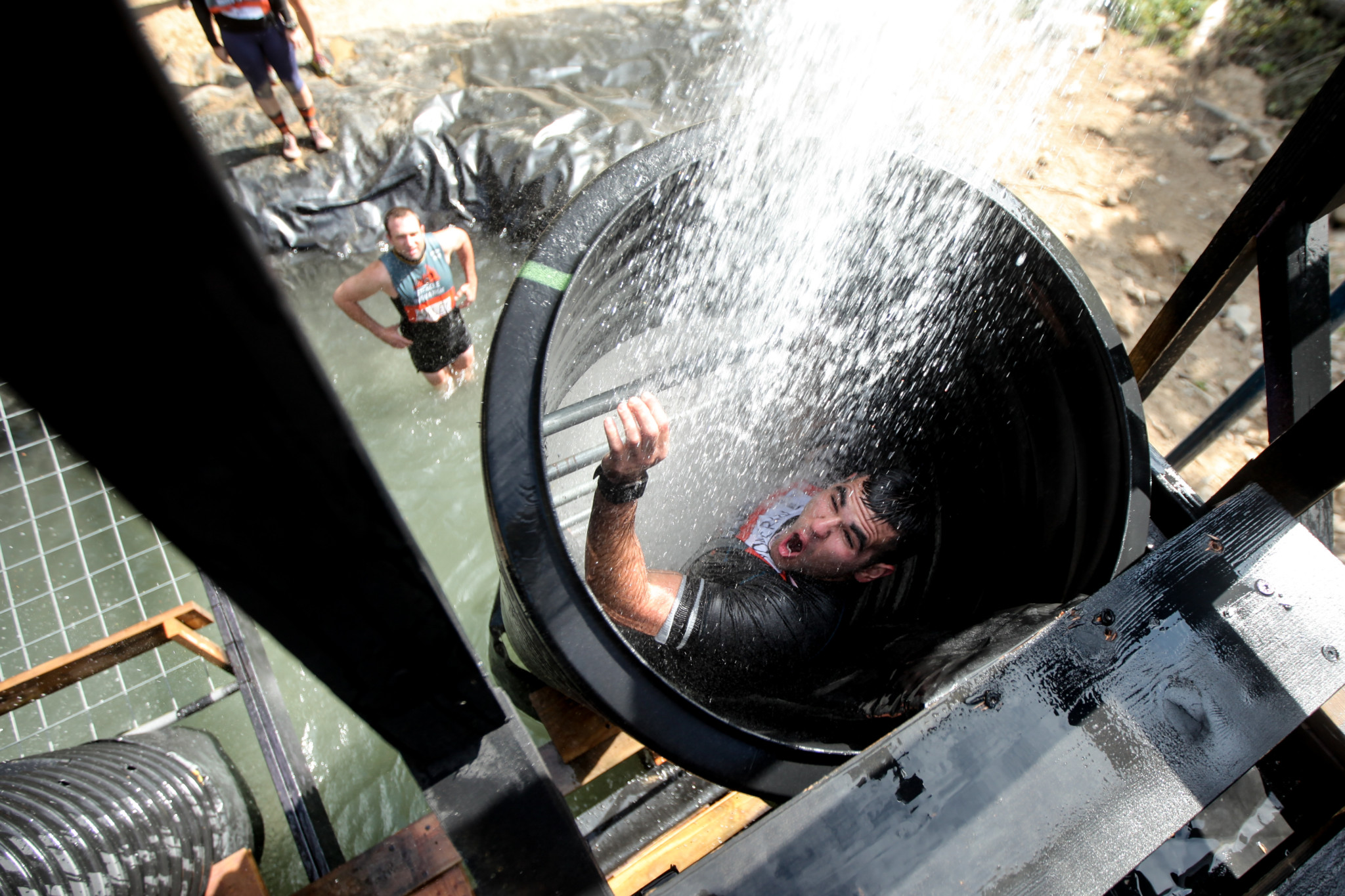 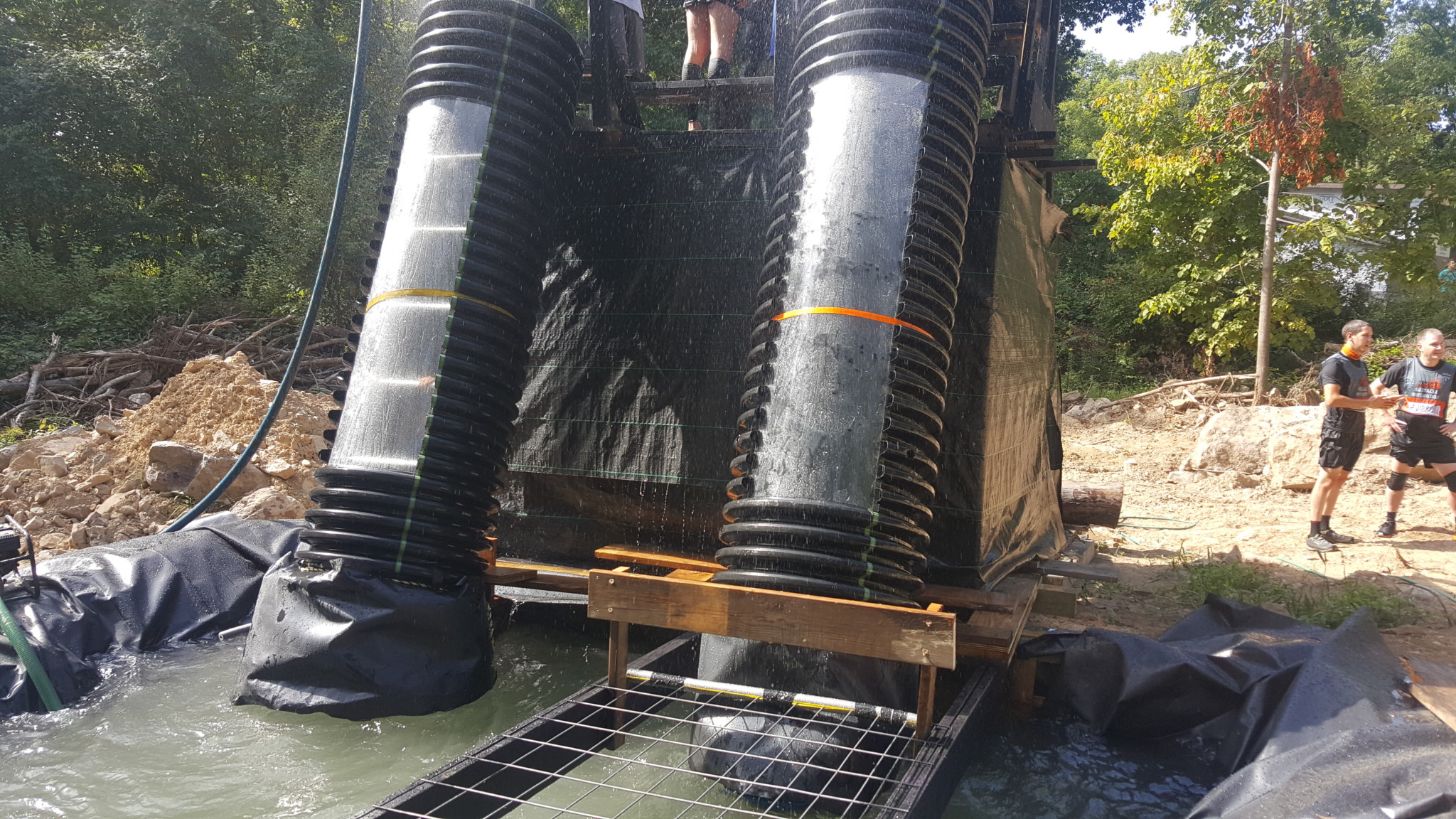 Another brand new obstacle is called Reach Around, which requires participants to climb almost 20 feet in the air to a point which requires some problem-solving to get past a point before climbing back down. This obstacle combines both the need for upper body strength as well as the need to overcome a fear of heights. 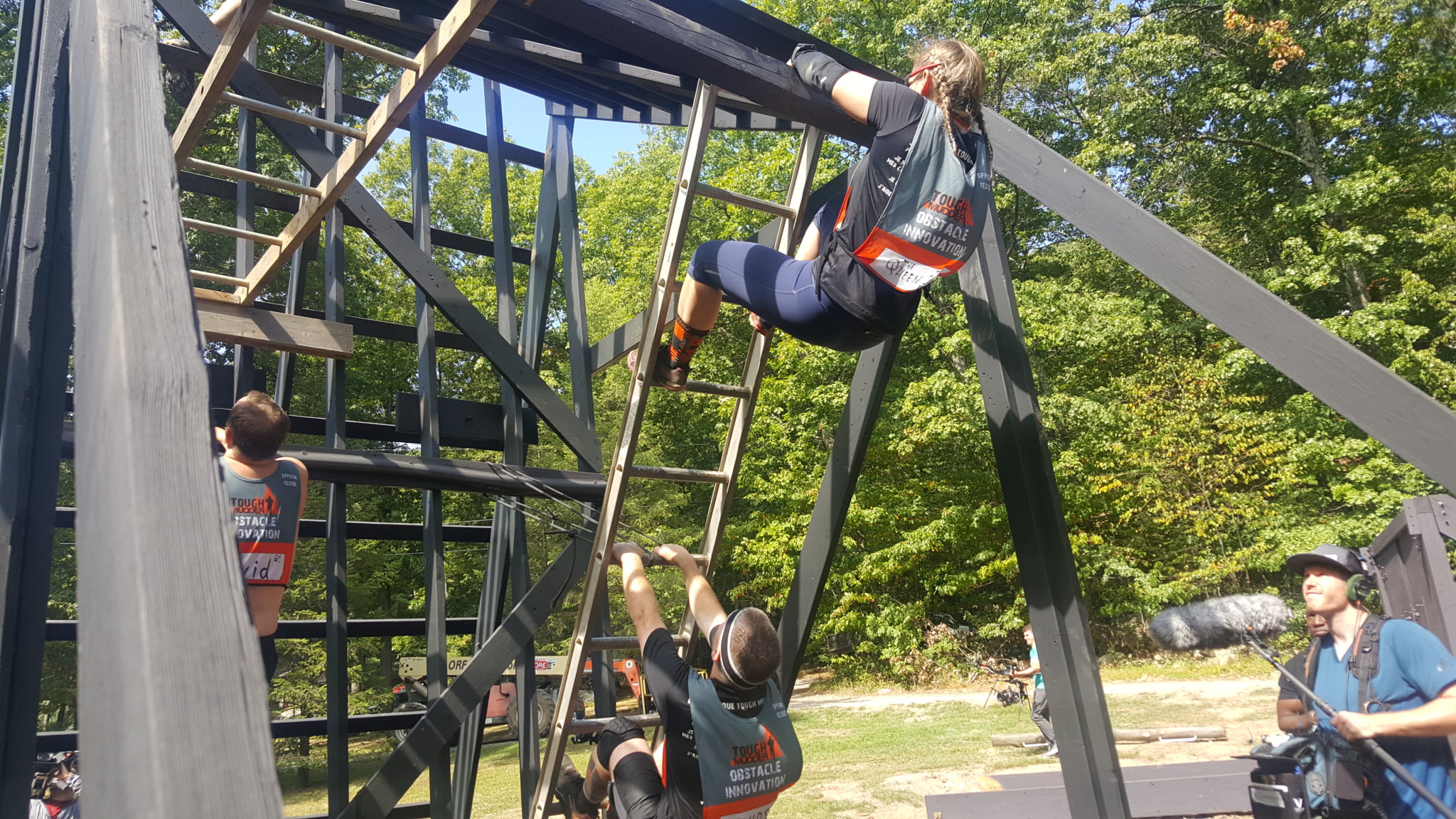 The remaining two new obstacles are the latest updates on successful obstacles from the past. Arctic Enema was originally just a dumpster full of ice water separated by a fence, requiring you to dunk yourself completely to emerge at the other side (and originally it was called “Chernobyl Jacuzzi”, but that’s another story). Version 2.0 introduced in 2015 forced Mudders to slide into the ice under wire fencing, preventing you from hesitating on your way down. The latest version, Arctic Enema – The Rebirth, replaces the fenced-in slide with a tube, reminiscent of the old obstacle “Boa Constrictor”. The catch? You’re supposed to go down the tube head first, which means you get more submersion, more cold, and a greater element of fear. Well played, Tough Mudder. 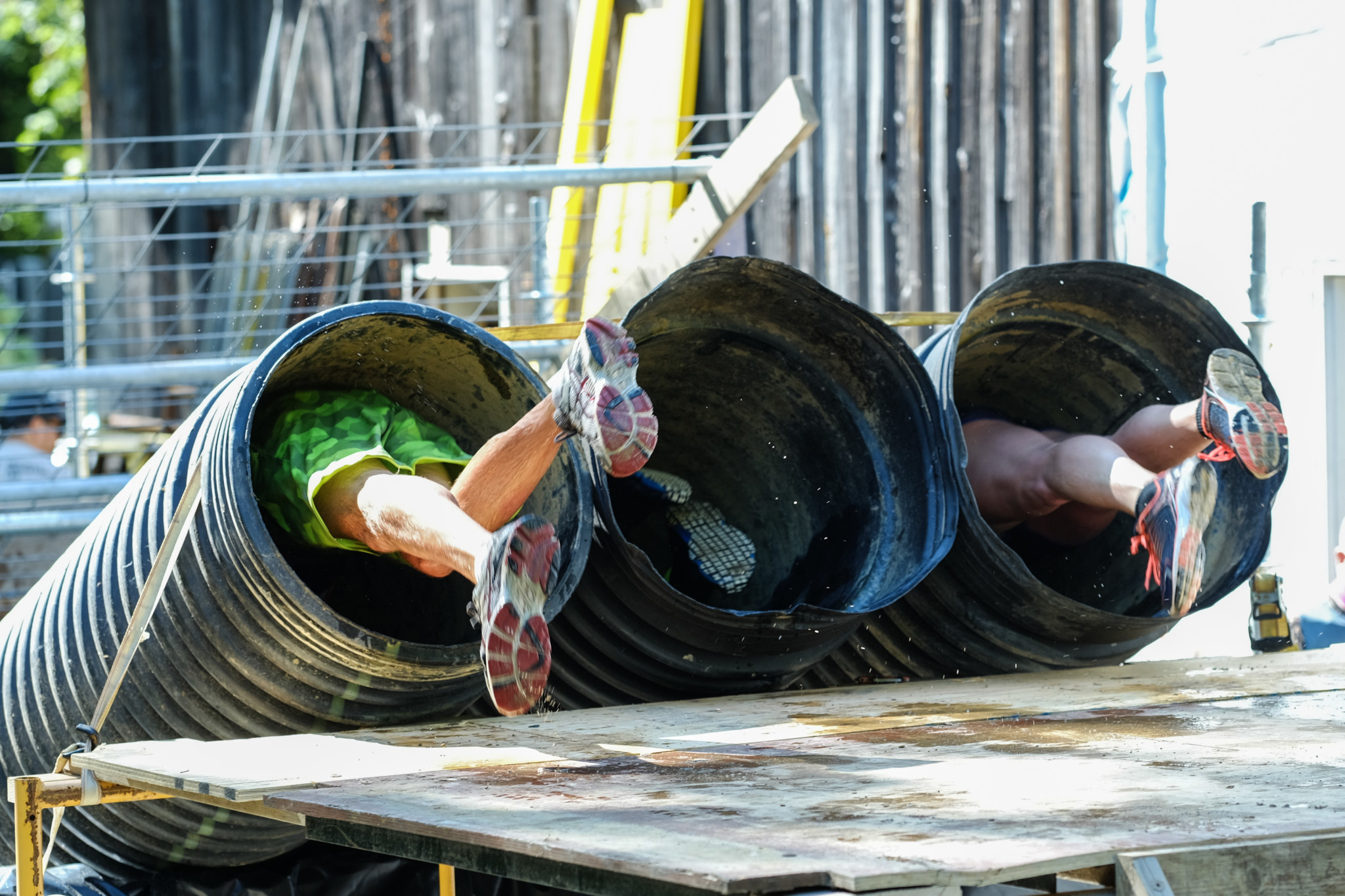 Also updated is Funky Monkey. This was originally just a monkey bar climb over water, and it was updated to add a transition from monkey bars to a pole. If you have finally mastered this skill, in 2017 you get to try Funky Monkey – The Revolution, which adds moving wheels to the mix of items you need to grab to get across. This innovation may or may not have its inspiration from the American Ninja Warrior courses.

Legionnaires, those who have already completed a Tough Mudder, will have more options this year as well. Three obstacles will feature Legionnaire Lanes, where an obstacle has been adapted to be just that much tougher (and get an even more aggressive name). You might call these versions “enhanced”, with the same meaning as “enhanced interrogation”. Augustus Gloop will become Snot Rocket, and Legionnaires will have to approach the entrance to the tube through a wire covered pool of water, reminiscent of Cage Crawl, with only a few inches of water between you and the fencing. The Legionnaire Lane for Reach Around is called Stage 5 Clinger and will require you to climb to the top at an even steeper, more technical angle. Birth Canal has been adapted as Black Hole, requiring you to crawl under heavy bags of water, but this time in complete darkness (WTM insider alert: this obstacle will not be present at Vegas this weekend. Now you know!). Finally, instead of Electroshock Therapy, Legionnaires will be able to opt for something called Kong, which will require you to swing from ring to ring high in the air. The twist is that the rings are spaced farther and farther apart as you cross the obstacle. 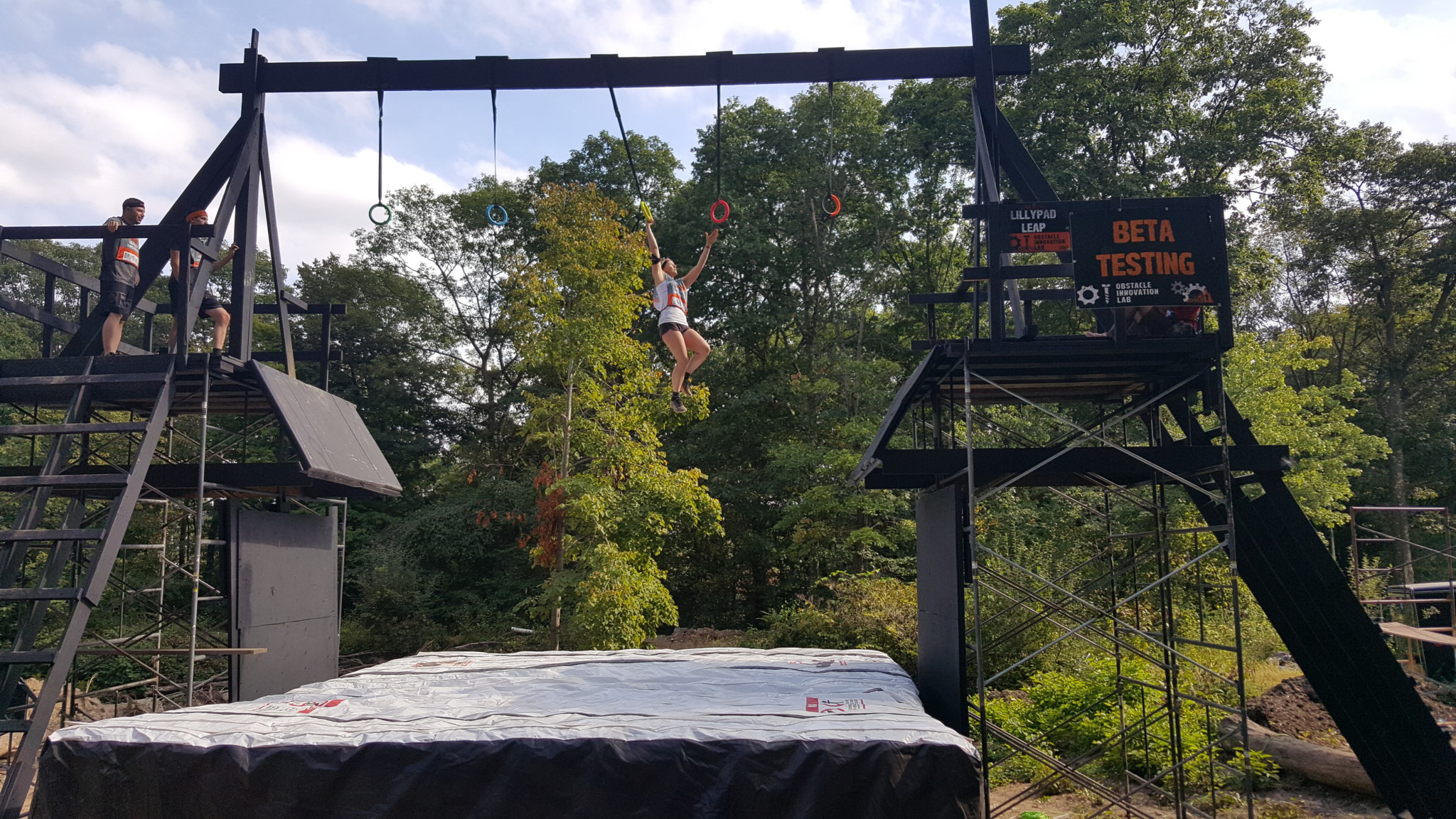 Tough Mudder has shown that it can innovate by introducing new obstacles and keep the event fresh by updating old ones. The focus is on making obstacles that are challenging, but entertaining.I know that I can’t wait to give Augustus Gloop a try. Even if no chocolate is involved.

Bonus: You can hear the podcast with the entire conversation between Eli, ORM’s Matt B. Davis and myself, here.

Fans can watch the world’s leading ultra-endurance athletes take on these new challenges for the first time and compete for a $100,000 grand prize by viewing the Tough Mudder/CBS Sports’ World’s Toughest Mudder Livestream at ToughMudder.com.

The new 2017 Tough Mudder obstacles are:

For those who have completed a Tough Mudder event, known as Legionnaires, Tough Mudder is providing new challenges – in the form of special Legionnaire-only lanes to enhance their experience in 2017. The lanes will be new twists on classic challenges, as well as an all-new Legionnaire-only finisher obstacle that will test participant’s upper body strength and fear of heights.

“The 2017 enhancements set a new standard of excellence in obstacle innovation and showcase the physicality and intensity which makes Tough Mudder unique,” said Will Dean, CEO and Co-Founder of Tough Mudder, Inc. “The mental and physical challenges participants experience is ­­­­what makes Tough Mudder the industry leader. We remain committed to exploring and engineering ways to present new challenges and increase obstacle difficultly to keep our events fresh and exciting. We look forward to welcoming thousands of new and returning participants to Mudder Nation in 2017 to face these challenges together.”

For more information on the 2017 Tough Mudder obstacles, World’s Toughest Mudder, the Tough Mudder CBS Sports special or to register for an event, visit ToughMudder.com. Join the conversation by following Tough Mudder on Twitter at @ToughMudder or Instagram at @Tough_Mudder.

Founded in 2010 with the launch of the Tough Mudder event series of 10-12 mile obstacle courses, Tough Mudder Inc. has since grown to become a leading active lifestyle company. The brand includes Tough Mudder Half, an obstacle challenge bringing the thrills of Tough Mudder to a 5-mile course; Mudderella, an obstacle course series created by women for women; Fruit Shoot Mini Mudder, a custom event for children ages 7-12; Toughest Mudder Series, the eight-hour, overnight competition series; World’s Toughest Mudder, a grueling 24-hour endurance competition; and an extremely vibrant engaging social and digital destination for leading fitness, nutrition and wellness content delivered across multiple platforms. The Tough Mudder family of brands and online community is united by a commitment to promoting courage, personal accomplishment and teamwork through unconventional, life-changing experiences. With more than 2.5 million participants to date, Tough Mudder Inc. will produce more than 120 events worldwide in 2016 across five continents, including Asia through its partnerships with Seroja and IMG. More than 20 of the world’s leading brands are sponsorship and content distribution partners, including Merrell, Old Spice, Shock Top, Cellucor, Volvic, Jeep, Britvic, L’il Critters, US Army, Virgin Active, Olympus, Bosch, Live Stream, The CW and CBS. To join the conversation, follow Tough Mudder on Facebook at facebook.com/toughmudder, on Twitter @ToughMudder, and on Instagram @Tough_Mudder.

Known as one of the most extreme endurance events in the world, the World’s Toughest Mudder event, presented by Cellucor, is the only competitive event that Tough Mudder, Inc. hosts in 2016. Competitors are eligible to win a total of more than $170,000 in prizing, including a grand prize of $100,000 for teams that complete at least 100 miles together. Like all Tough Mudder events, World’s Toughest Mudder encourages Mudders to work together, help one another overcome obstacles and push past their physical and mental boundaries. While competitive in nature, World’s Toughest Mudder is about finding one’s personal limits and putting teamwork to the test, and hundreds of participants take part in the event as a team. The course is a grueling, five-mile loop featuring diverse desert terrain, steep hills, mud pits and more. Prizes are awarded to participants who complete the most miles within 24 hours, and the team of two or more that completes 100 miles together wins $100,000. Competitors take on 20-25 of Tough Mudder’s most challenging obstacles including The Cliff, Human Operation, and Gut Buster, in this 24-hour, timed event to be deemed the toughest man, woman and team on the planet. 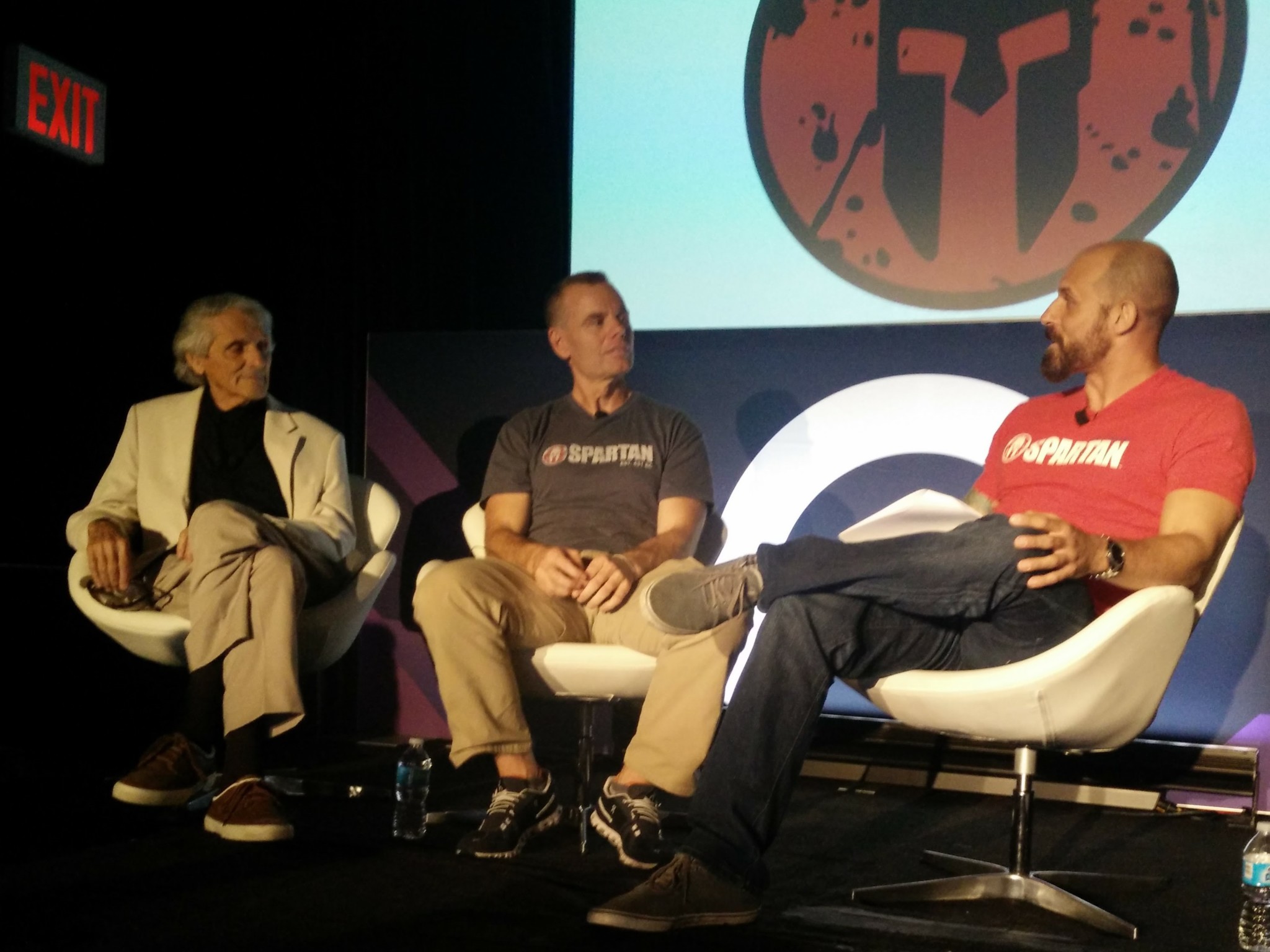 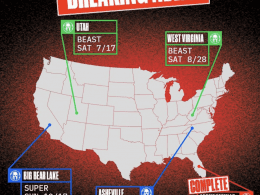 Spartan, the world’s leading endurance sports and wellness brand, has announced the return of its US National Series… 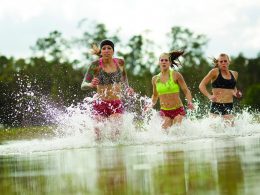 3 days ago, the Wall Street Journal wrote an article about Spartan Race asserting the company was in…