SKIP THE ARTICLE AND GO STRAIGHT TO APPLICATION

Stop me if you’ve heard this one before. Tough Mudder, one of the original giants in the OCR space, launched a 10-12 mile grueling obstacle race. Initially, only 75% of people who start go on to finish. It’s designed by military special blah blah blah. As I said, you’ve heard it. 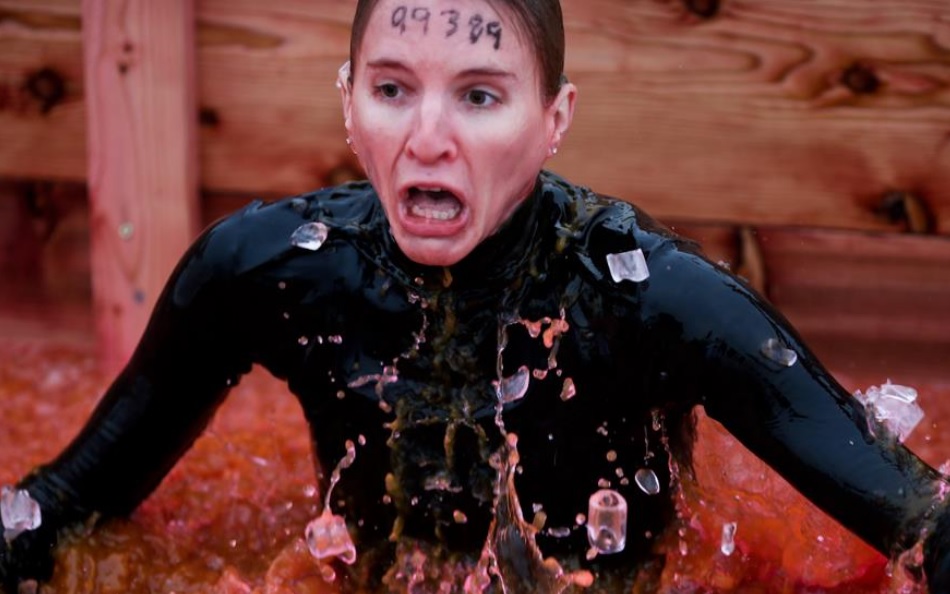 But then one day, they added a new event – World’s Toughest Mudder.

Then Tough Mudder created Mudderella, It was just like Tough Mudder, but for women, and was purple. Similar cries of confusion were let out across the land.

Over recent years, all of us in the OCR world then had the same conversations and online arguments with Urban Mudder, Tough Mudder Half, Tougher, Toughest, and The Tough Mudder 5k.

And now the one you thought they would never do. The one that if I told you even 2 years ago,  you would have never believed me. The one that was created as a joke Facebook group because that’s how far from reality, OCR fanatics thought it was possible.

Are you ready for…DUN DUN DUN…

Tough Mudder announces an event they are calling  –“Tough Mudder X – The Toughest Mile On The Planet”.

The one mile course consists of 10 Tough Mudder obstacles and 10 “Functional Fitness Workout Zones”. The Zones will have exercises such as pull-ups, box jumps, and wall balls. All obstacles and workout zones are MUST complete. This means there are no penalty loops or penalty alternative exercises. You either complete the obstacle and/or workout zone or keep trying until the race is over.

When we asked TMHQ who they had already invited to this event, we were told:

“We put it out to a wide range of athletes including top OCR competitors, Decathletes, Crossfit Pro’s, Ultrarunners, Parkour Athletes, a couple of the Harlem Globetrotters, etc… The event will have some of the best athletes in the world competing against each other”.

Since everything has been under wraps until today it has been hard to get in touch with athletes to confirm their attendance. However, a little birdie told us a certain “Macho Man” has made plans to attend. 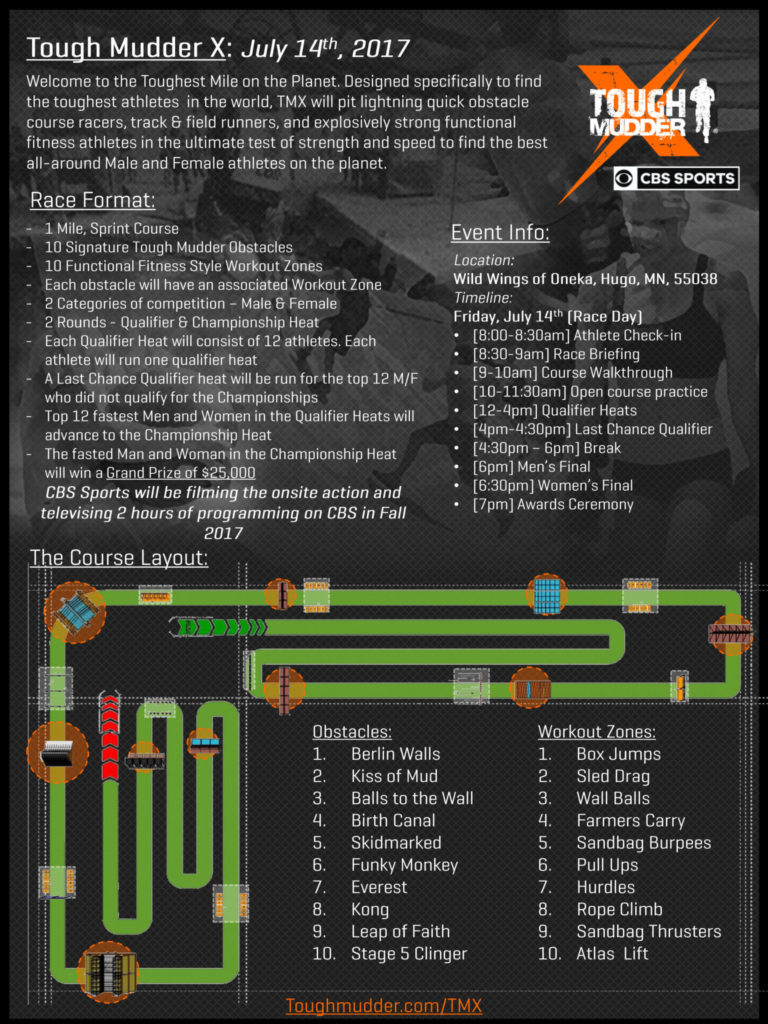 The complete press release, which includes TV air times for Tough Mudder X, and Toughest, is below.

With $50,000 on the line, one of the largest prize pools in the fitness sport and obstacle course racing (OCR) industries, Tough Mudder X will pit top male and female athletes across multiple disciplines, ranging from OCR to HIIT/functional fitness training to racing, against one another. The competition will test their strength, agility and speed over a one-mile course in search of the fittest and fastest athletes in the world. $25,000 will be awarded to both the first place male and female finishers.

“The debut of Tough Mudder X , in partnership with CBS Sports, solidifies our commitment to innovation and continued leadership in the sports event world by debuting the ultimate race in sports that will capture all the hottest elements occupying elite athletes and sports fitness enthusiasts alike,” said Will Dean, Co-Founder and CEO, Tough Mudder, Inc. “Due to the overwhelming success of World’s Toughest Mudder on CBS, the expansion of our partnership to broadcast further positions Tough Mudder as a leading active lifestyle sports brand and video content company. We can think of no better partner than CBS Sports to bring this new sporting event and all of its drama, action, and excitement that makes for compelling sports television to millions of viewers and fans across the United States.”

“We are excited to expand our partnership with Tough Mudder and debut all programming, including the innovative new Tough Mudder X, on CBS,” said Dan Weinberg, Executive Vice President of Programming for CBS Sports. “We look forward to further showcasing Tough Mudder’s world class athletes and competitions, and all the drama surrounding their biggest events.”

Tough Mudder X is a one-mile course that combines the ultimate physical challenges and mental grit of a Tough Mudder course with the intensity of a timed, functional fitness workout and speed of a world-class mile. Elite athletes will be pushed to the brink of their limits as they conquer 10 of Tough Mudder’s most signature obstacles, including Kong, Everest 2.0 and Funky Monkey – The Revolution, and 10 functional fitness stations known as Workout Zones, in a battle to be the fastest to cross the finish line. 200 selected athletes will compete in qualifying heats with the top 12 male and female finalists progressing to the Final Rounds taking place on the same day. Tough Mudder X will take place on Friday, July 14 in Hugo, Minnesota.

The Tough Mudder broadcast schedule on CBS is as follows (All times Eastern):

About CBS Sports:
CBS Sports, a year-round leader in television sports, broadcasts a portfolio of events on the CBS Television Network, including THE NFL ON CBS; “Thursday Night Football;” college basketball, including the NCAA Division I Men’s Basketball Championship; golf, including The Masters®, PGA Championship and PGA TOUR; college football, including the SEC ON CBS; and CBS SPORTS SPECTACULAR. In addition, the division includes CBS SPORTS NETWORK, the 24-hour home of CBS Sports; produces INSIDE THE NFL for SHOWTIME; and partners with CBS SPORTS RADIO and CBSSports.com in creating recognized leaders in sports radio and digital.

CBS Sports Network is available across the country through local cable, video and telco providers and via satellite on DirecTV Channel 221 and Dish Network Channel 158. For more information, including a full programming schedule and how to get CBS Sports Network, go to www.cbssportsnetwork.com.

Amelia Boone - Back To The Future 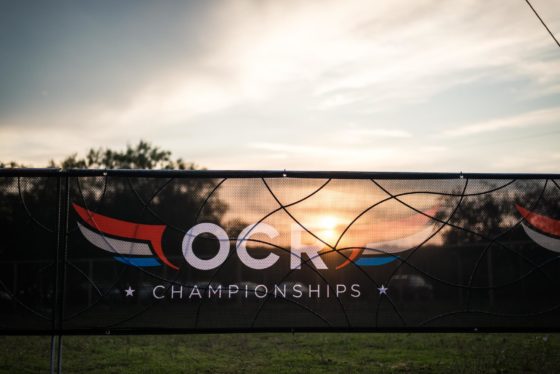 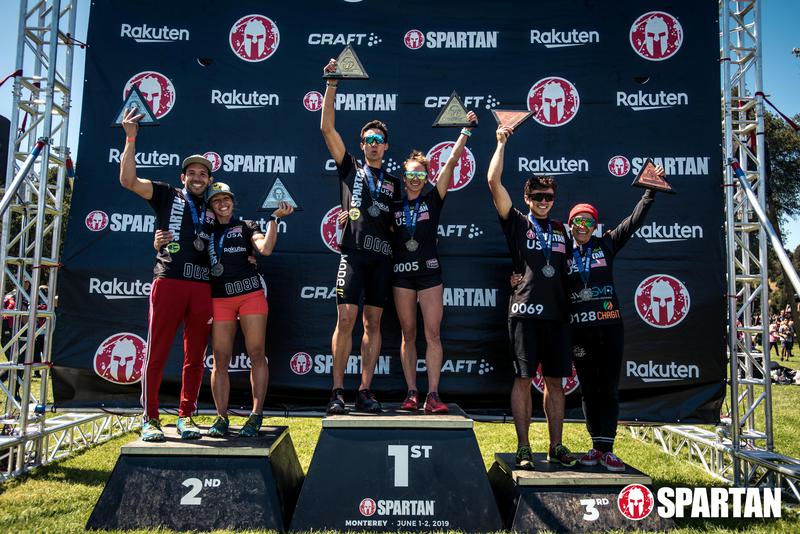 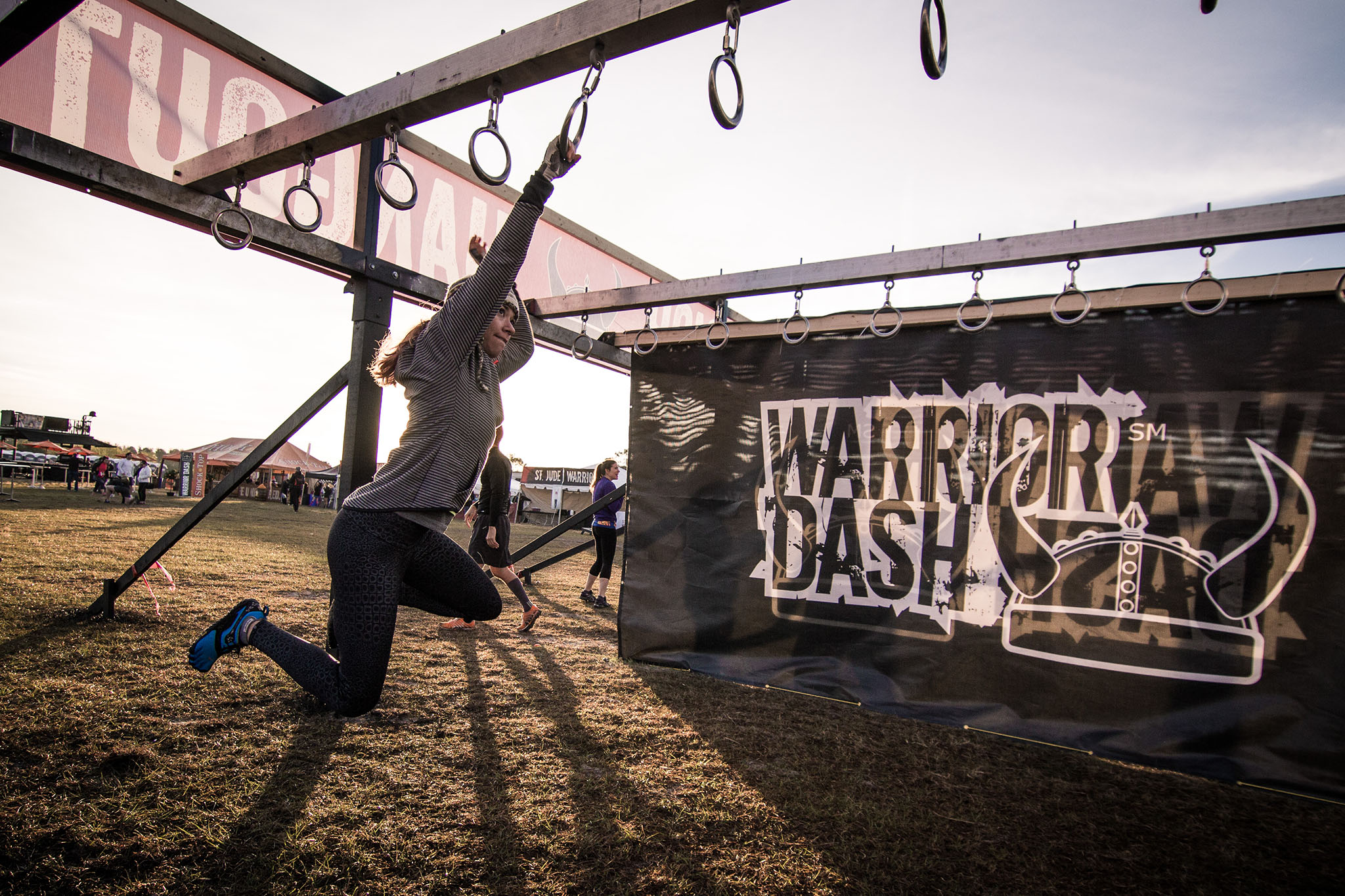 It’s Championship Season, and the Warrior Dash World Championship should be on your radar!  The Prize Purse is…