If you’ve ever run a Tough Mudder event, and I mean anywhere in the world, you’ve probably seen Colorado native Jim Campbell. His signature blue shirt, hydration pack, and hat/beanie (always adorned with the Colorado state flag) have been around since TM’s earliest days. He is an ambassador to the sport in the truest sense of the word. Last weekend Jim, or “Da Goat”, as he is more widely known, elevated his status to Mudder Legend as he became the first person to complete 100 Tough Mudder events. 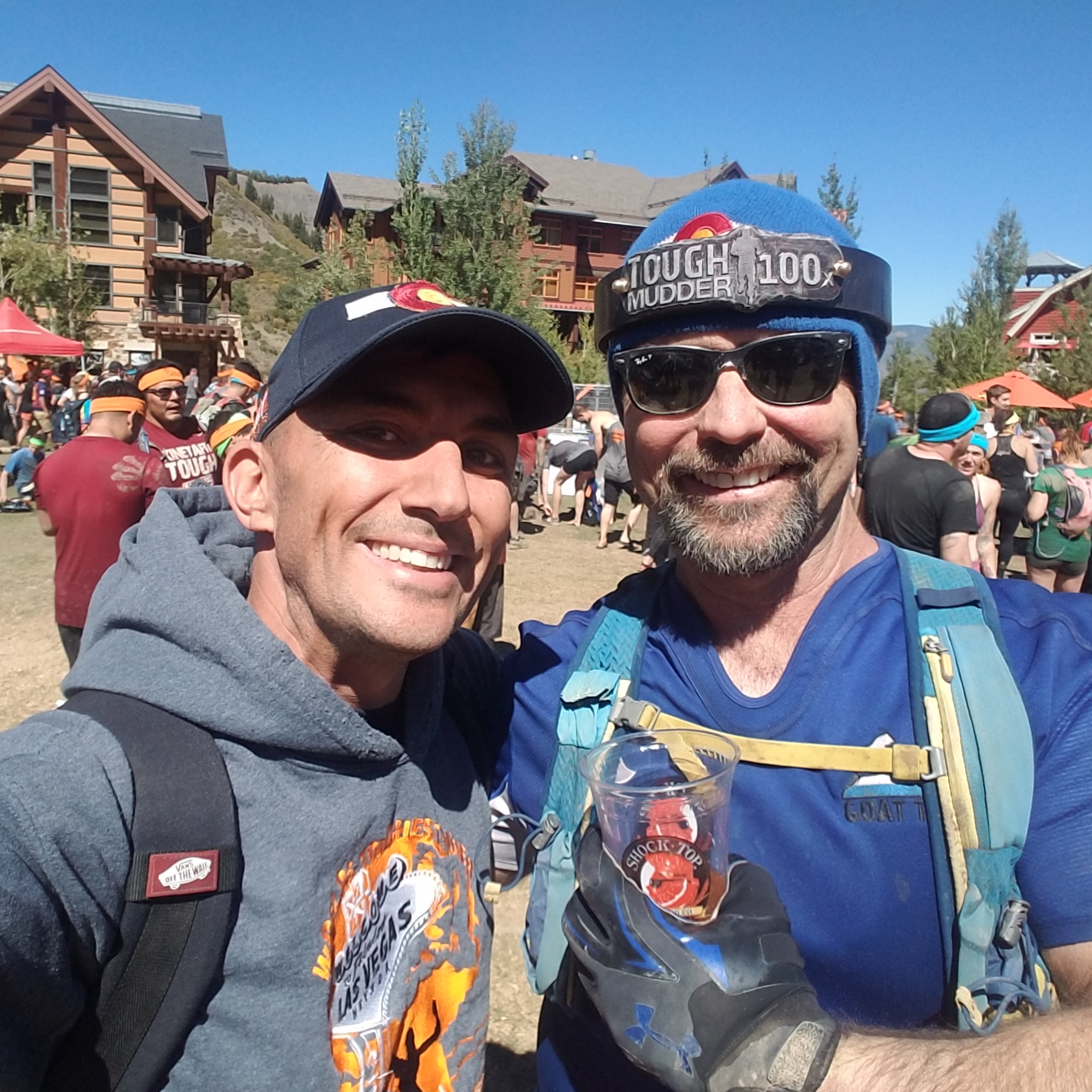 While the feat alone is impressive, if you know anything about Jim’s background, this story quickly goes from impressive to inspiring.

A horrific motorcycle crash almost took his life back in 2009. While he managed to survive and somehow escape permanent paralysis, he spent the next six months in a cerebral halo. Rehabbing from his injuries was slow and arduous, with multiple setbacks along the way. Through it all, Jim remained undeterred. He had been an athlete all his life (formerly a top ranked AMA racer and a 1984 USA Olympic windsurfing team qualifier), and he refused to slip quietly into a life of inactivity.

Through a friend’s Facebook post, Jim discovered Tough Mudder back in early 2011. He would participate in his first event in June of that year, in Beaver Creek Colorado. Although that first event tested him physically and mentally, it also got him hooked. In the years that followed, Jim would travel the world attending more and more events. He’s completed six events in Canada, four in Ireland, four in Scotland, four in England, and two in Germany. He’s also one of only a handful of people who have competed in all five World’s Toughest Mudder events. 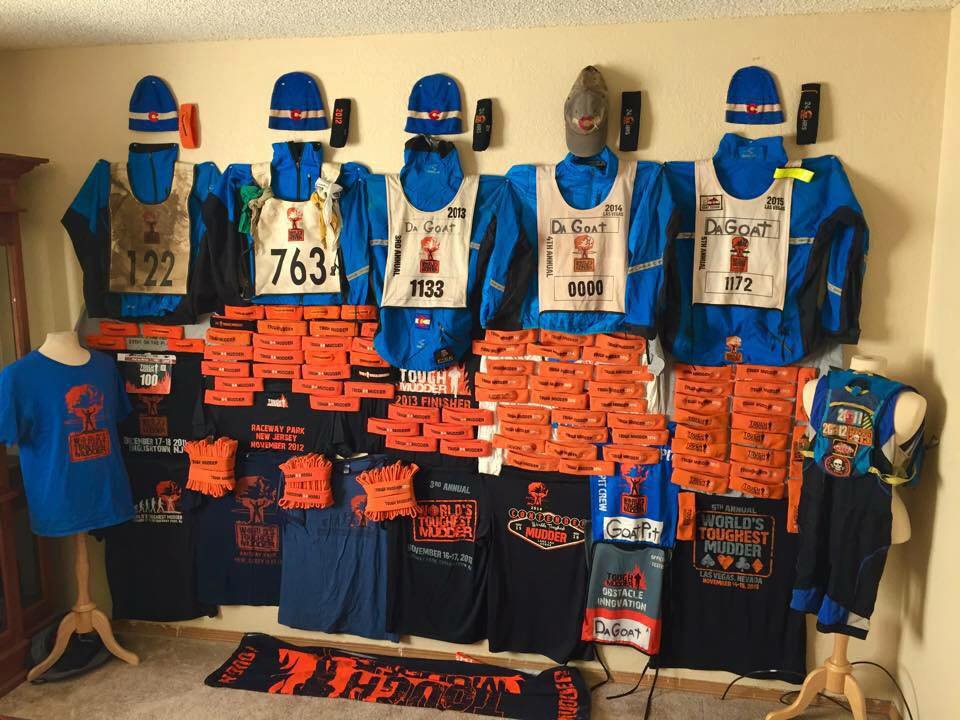 As previously mentioned, Jim’s first Tough Mudder was in his home state of Colorado back in 2011. In 2014 he completed his 50th Tough Mudder, also in Colorado. So it was pretty much a no brainer that when he was plotting his path to 100, he made sure that he hit the mark in the Centennial state.

When you attend as many events as Jim, you manage to make a few friends. Or in his case, hundreds of them. And many of them flew in from all around the country last weekend to help him celebrate his monumental achievement. The Saturday morning 8am start wave at Tough Mudder Colorado in Snowmass was packed with friends and admirers, all wearing gear with his signature #GOATTOUGH logo.

Tough Mudder did a wonderful job of recognizing Jim throughout the day, including  a presentation from start line MC Sean Corvelle prior to the launch of his wave.

TMHQ also had a media team shadowing his movements along the course, and live-streaming some of the action on Facebook. Throughout his lap, Jim did as he always does. He cruised along at a steady pace, chatting and laughing with friends and strangers alike. Always there with a helping hand, should one of his fellow Mudders need it. 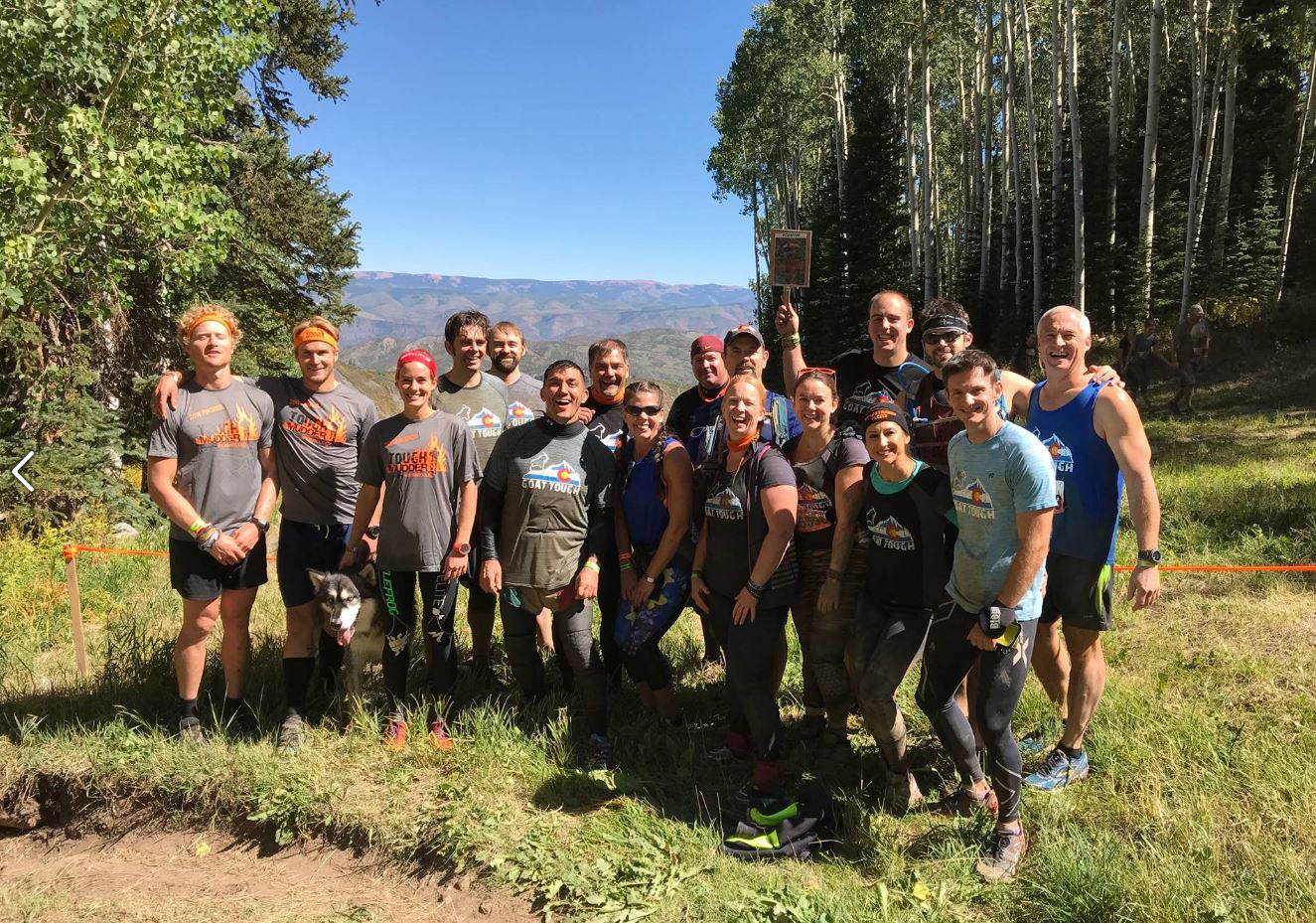 As Jim and his team approached Electroshock Therapy, the final obstacle of his 100th event, they were joined by even more of of his friends. Many had finished their laps earlier, and had waited around to witness Jim’s great achievement. EST hype man Clinton Jackson then presented Jim with a hand crafted steel “100th Tough Mudder” headband, that TMHQ had made for him. As the headband was placed on his head, Jim joked at how similar it looked to the steel cerebral halo that he had been confined to for all those months following his accident. In a way, it was a fitting reminder of how far he had come, and how much he had achieved.

After receiving his headband, Jim locked arms with his friends and made a human chain. In true Tough Mudder fashion, they all stomped their way through the Electroshock Therapy obstacle together as a team, and crossed the finish line the same way. 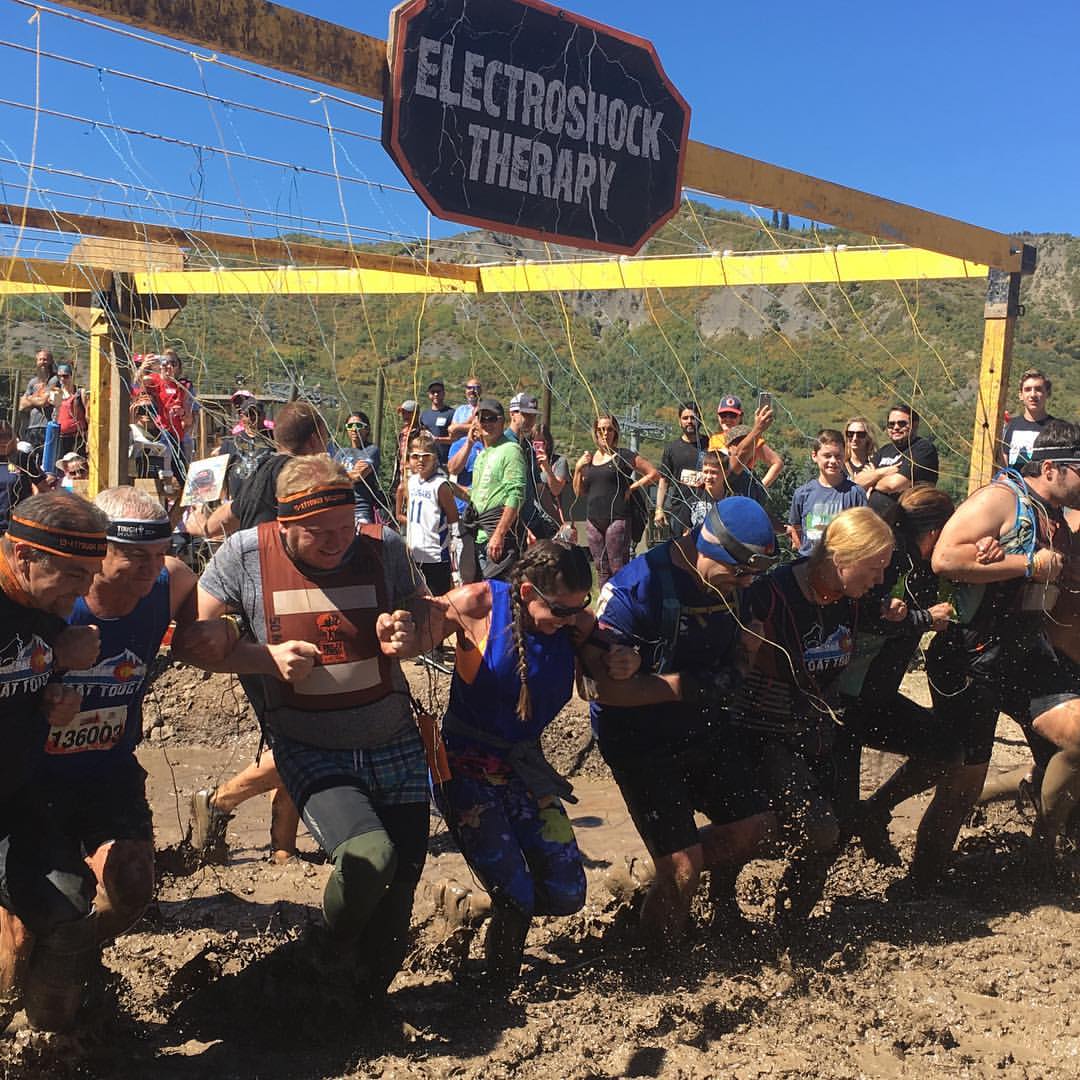 Down in the Mudder Village following his lap, Tough Mudder and Merrel presented Jim with an impressive “schwag bag” of gifts that included everything from shoes to leggings to a jacket, all of which were embroidered with the Tough Mudder #100EVENTS logo.

Jim spent the rest of the time laughing and reminiscing with friends, posing for photos with admirers, and soaking in all of the love that Tough Mudder and its community has for him.

It was a great day, dedicated to a great man. So congrats Jim Campbell, or I should say “Da Goat” on your centennial achievement. Here’s to 100 more. 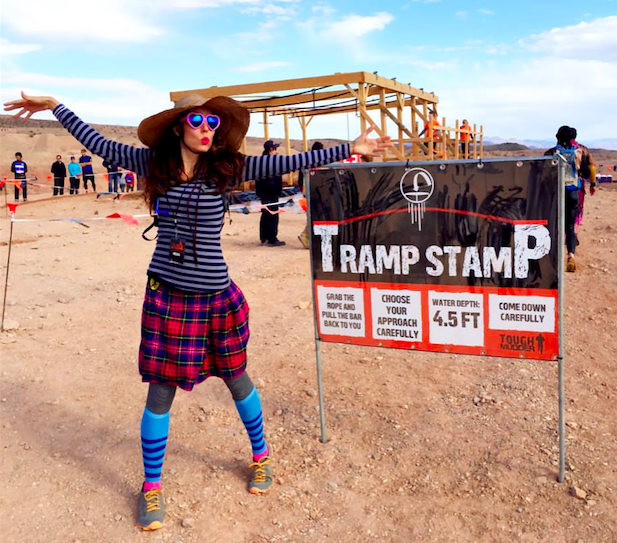 Oh, The miracles of technology. As you already know, our crack team was on the ground all weekend… 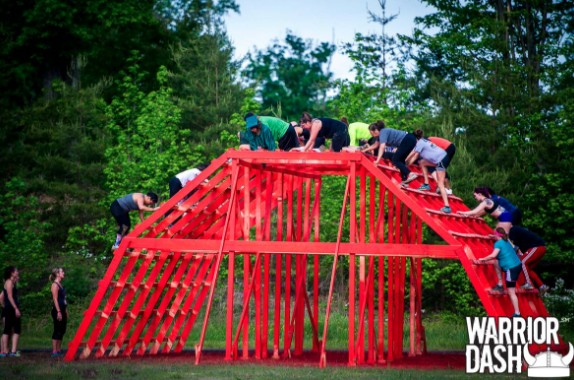 This morning, Louisiana based “The Advocate” released information regarding an investigation concerning the failure of an obstacle at… 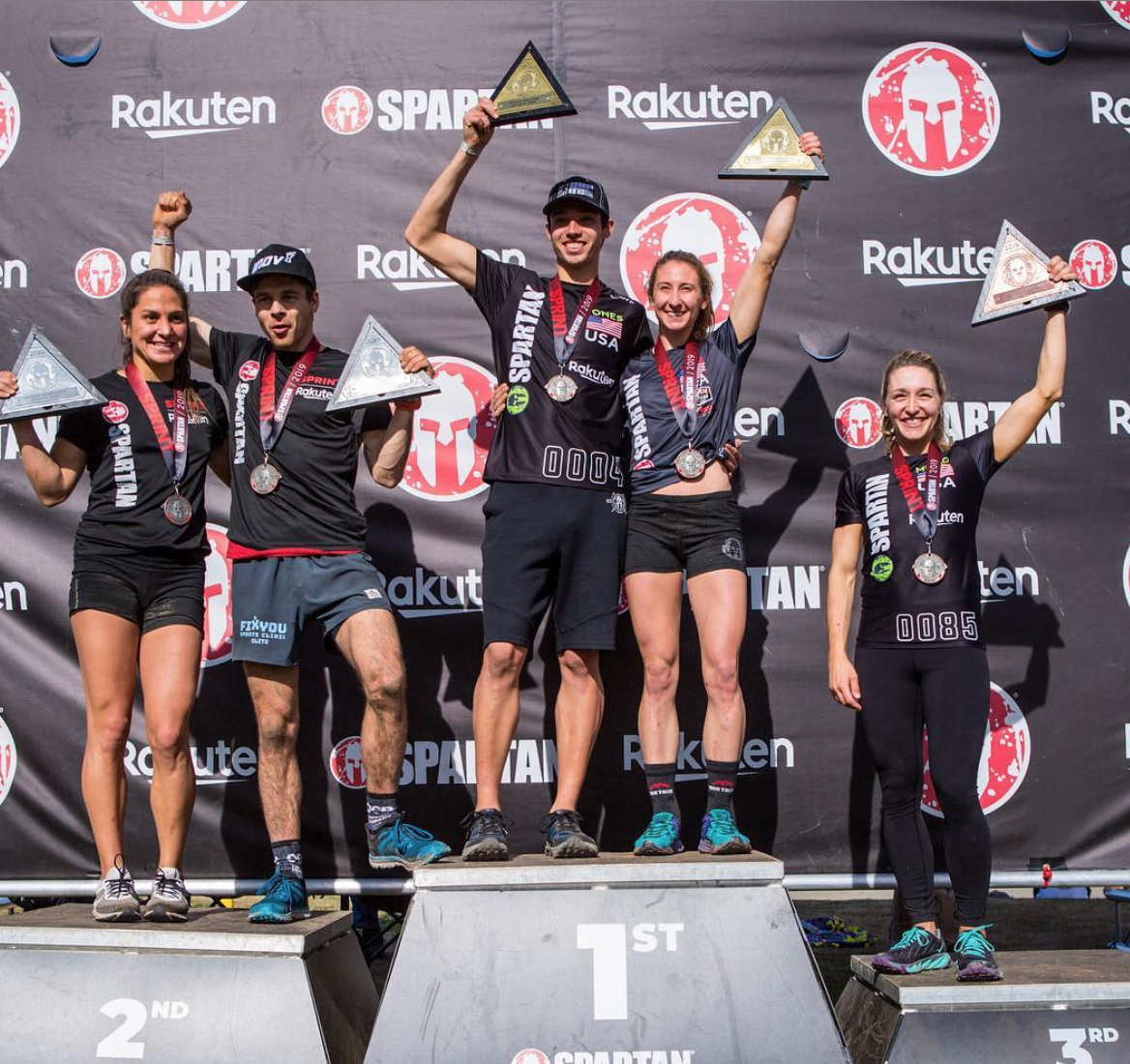