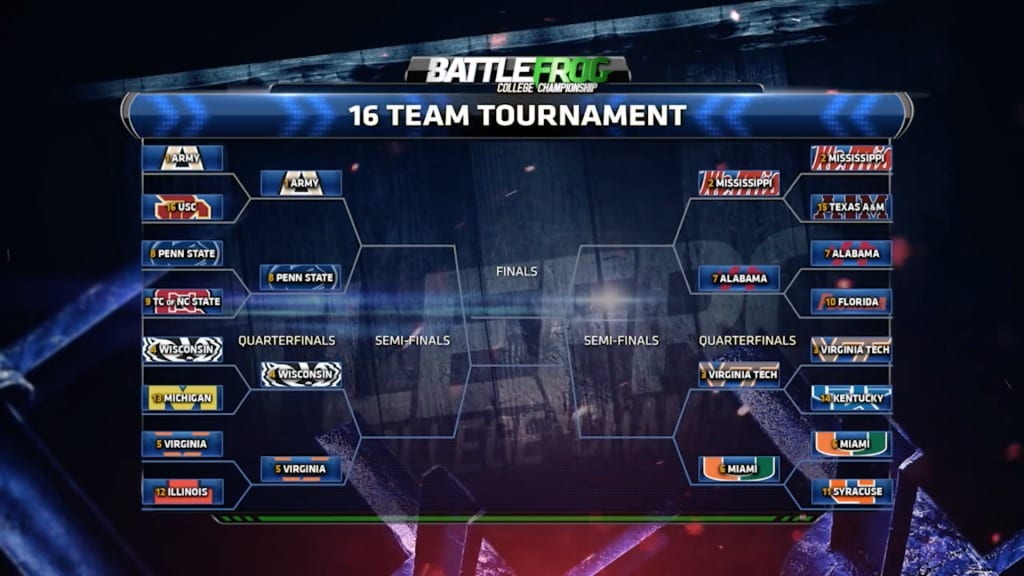 Having watched the first two episodes back to back, thanks to the wonders of DVR and ESPNU streaming, I’m really excited about this change of pace and what it could mean for the future of televised Obstacle Course Racing. The BattleFrog College Championships have managed to please most OCR athletes even when they aren’t completely sold on the short course representing OCR to the rest of the world.

The only negative things people had to say after the first episode was that it did not represent what a 13 mile Spartan beast is. It left out the endurance aspect that you get from even a 5k obstacle race. This is obviously a huge sticking point for people but I think that with the positive response they already have plus the commentary from viewers it could lead to the ultimate OCR show. Enough of what the significance of what this could mean, on to the show recap.

In episode 1 we saw teams getting their feet under them and some teams that weren’t the most obstacle racing inclined learning a lot fast. They all talked about being able to optimize their performance in the next round and shave valuable seconds. But the real question that most people must be thinking is can anyone compete with Army. I mean they kind of have a natural leg up by being the only school that does obstacles and has physical fitness as part of their requirements and qualifications.

Interestingly Ole Miss seems to have quite a bit of obstacle racing experience on their side when it came to how they attacked the obstacles. You really saw it when they had an athlete kick the bell and another dive head first through the opening in the Over Under Through. 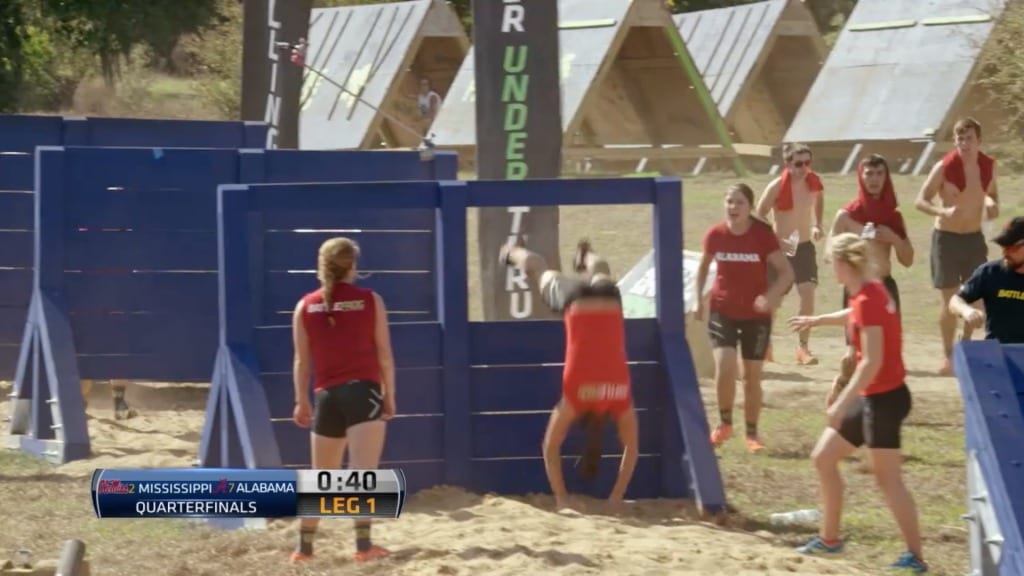 I’m excited to see the match up in this episode between Miami and Virginia Tech. Miami looked like they had good potential and having they them go up against Virginia Tech with Corinna Coffin on their team and how much knowledge she can pass on to her team.

***SPOILERS for Episode Two Ahead***

Up first we had the obvious crushing of Penn State by Army. In the first episode you saw Kayla Carpenter jump off the top of that first tall ladder climb, and it looks like in this run through she wisely scaled back her super hero jump. And it didn’t really seem to make much of a difference in her playing it safe. You couldn’t see Penn State after 15 seconds into the race. Easy win and Army moves on. 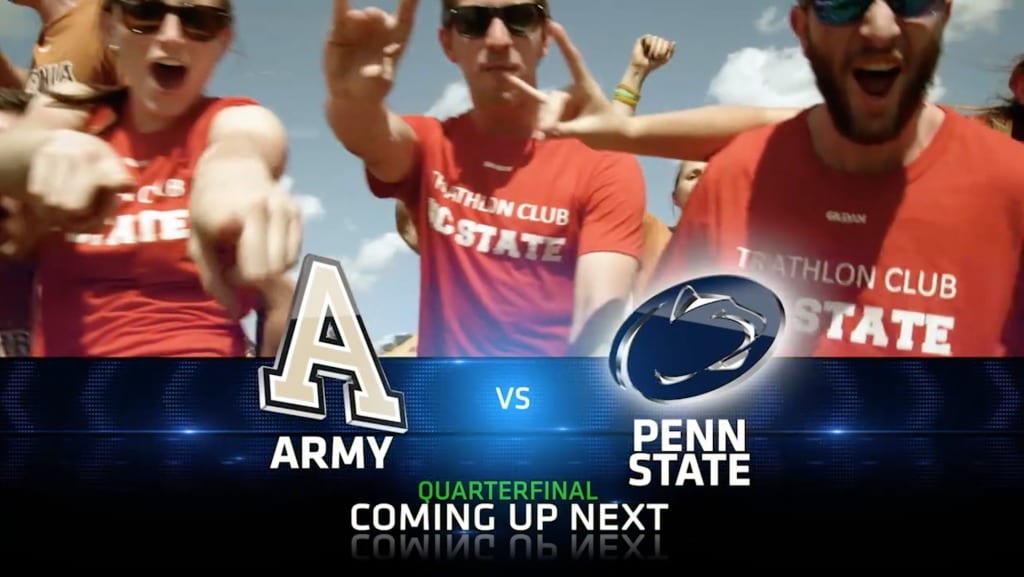 Second was Wisconsin vs. Virginia. The 4th and 5th seeds are very evenly matched here and proved to be a really close race. It was very surprising to see Virginia sneak up on them when Wisconsin missed the bell on the rope climb only to have Virginia also have to redo the rope climb. It looked to be all but in the bag for Wisconsin but the Wedge obstacle which looked very obvious to the rules was done wrong by Wisconsin and then they were called back. Virginia seized this opportunity near the end of the race to come back and move onto the next round.

The third match up between Ole Miss at 2nd seed vs. the 7th seeded Alabama didn’t leave for much of a surprise. Ole Miss ended up posting a quarter final time only 5 seconds slower than Army which should prove for a stellar match up if they meet in the finals. 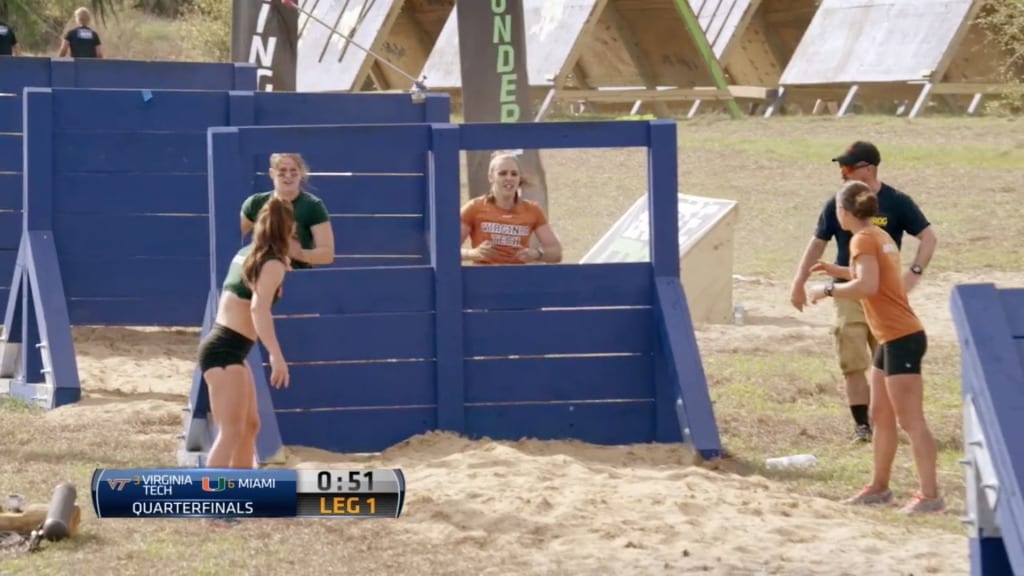 The final match of the episode was the one that I think everyone was waiting for, I was.  Virginia Tech took on Miami  in a fairly even match up and it looked to be Miami taking an early distance until a failed obstacle came into play again. Then it was the first time we saw two people on the obstacles at the same time. The second leg remained fairly tight and there was some back and forth in the third leg but still a close race. The ROTC 4th leg for VTech made it a runaway race and they sealed the deal with another fast race but still 20 seconds away from Army’s time.

The obstacles really came into full effect. No race is ever over just like in real long course racing. For BattleFrog if you can’t complete an obstacle during the elite wave you are stuck, Spartan Race races are continuously won and lost with things as simple as missing the spear throw.

The barbed wire and the Normandy Jacks must be made of non sharp wire. There was 2 or 3 people that got whipped back when they were caught on it. None of them looked worse for it.

Product placement for the Win. Inov-8

, Mudgear, Gildan, and 2XU. That’s how you do good advertising in the age of DVR and no commercials guaranteed.

What to Watch for in Episode 3

With two rounds to go you will possibly see teams like Army use their strength and possibly not go full out against the 5th seeded Virginia that got through on the other team failing obstacles. Then if they make it to the finals I think we might see Kayla Carpenter jumping from the top of the bars again.

Will Kim Duff continue to dive head first through the OUT obstacle even if they feel they can dominate. That’s an all or nothing move.

What other improvements will the teams find to shave the precious seconds off their time? Will anyone change up the legs to find stronger rope climbers. 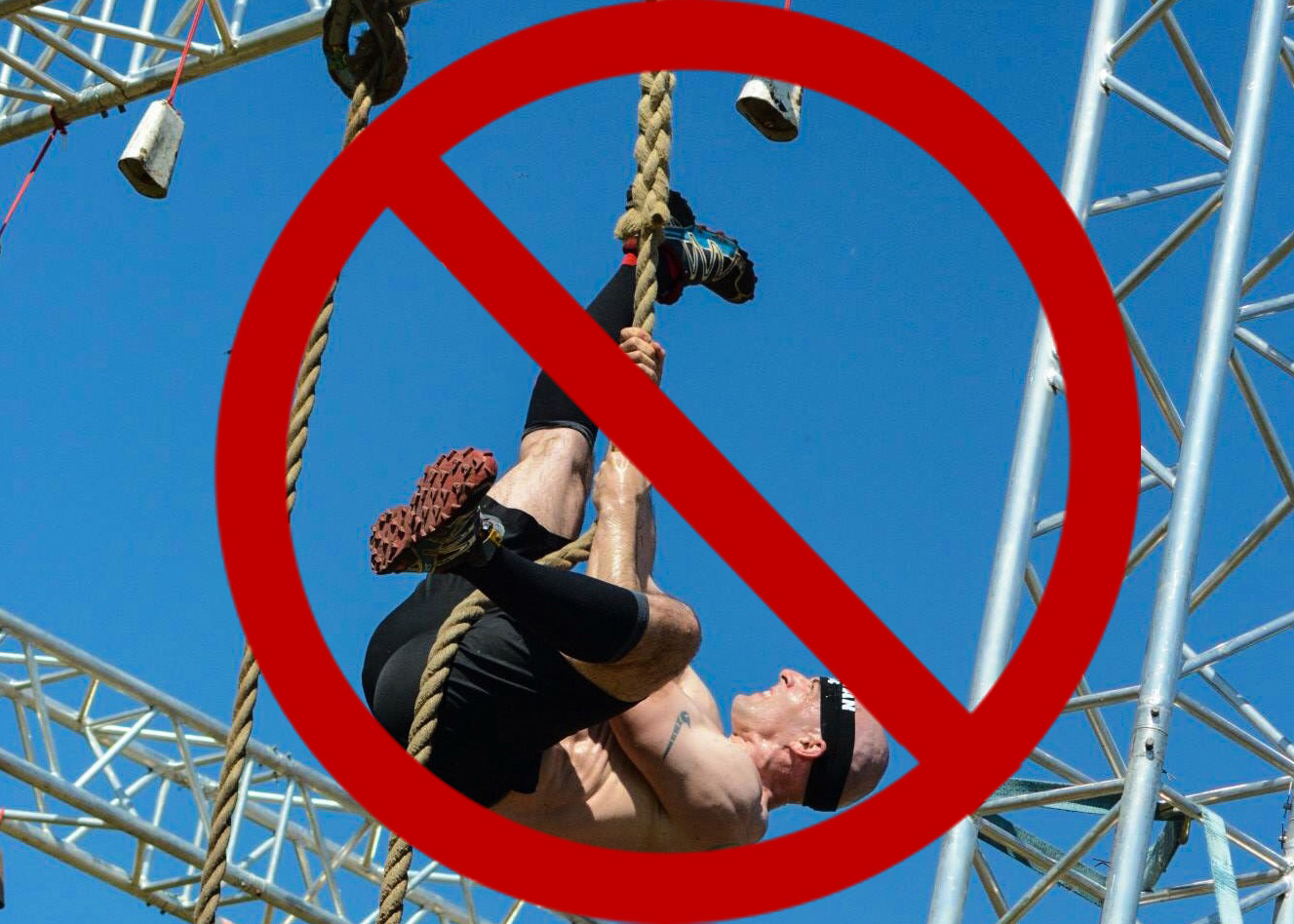 An email went out to several Spartan Race athletes early this morning from Robert Coble, Athlete Director at .… 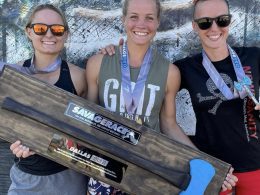 For the first time in its history, Savage Race will be offering a national points series and crown…