The Reebok All Terrain Supers have some incredible features to them and their water draining is second to none. But with that in mind they also have some flaws. 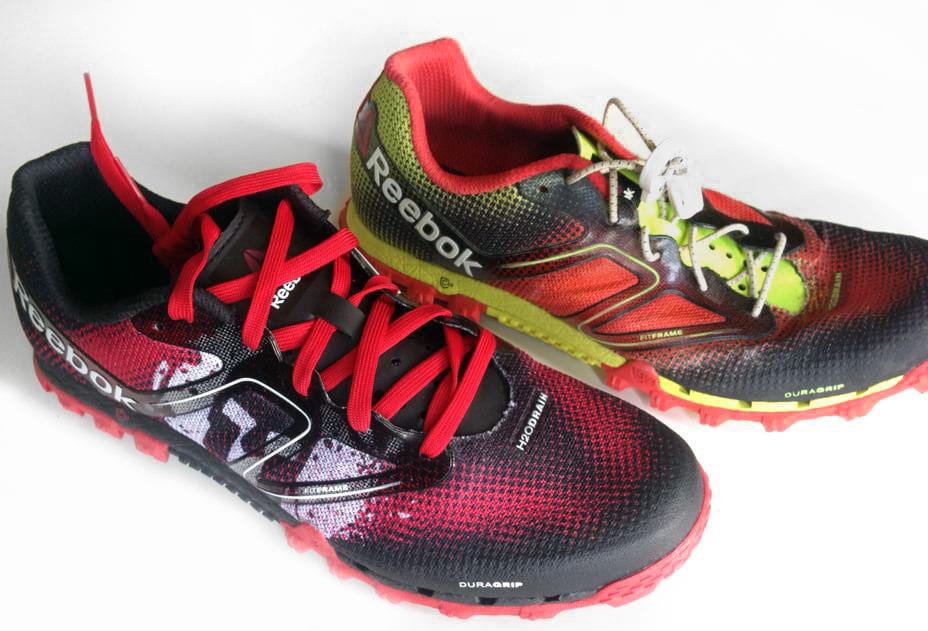 It is also worth reading the comparison between the Reebok All Terrain Super and All Terrain Sprint Version that I wrote, there are more specs on both of them.

. It’s been over a year and I can say without a doubt these are some of the best (top 5) shoes for obstacle course racing that currently exist. But like all things, they do have their downsides besides their great upsides.  Next I’ll cover all the details of the shoes, read on after the Reebok Promo video.

The bottoms have 1/4″ studs in the front and slightly larger, maybe 5/16″ in the back. Another feature they have on the soles is the textured grip area on the inner and out areas of the arches – this is to help with rope climbs. Now working your way up from the sole there is when the shoes really start to shine.

The upper is all synthetic and holds close to no water when they get wet. There are also drainage holes in the forefoot area of the shoes that remove water which would otherwise pool inside your shoes.  Reebok has added their duragrip technology to the toe box area to add durability to the toe box area but this is just a minor boost in durability since they are still thin everywhere else. The other nice thing with the upper is the tongue that is made of what they call “second skin” material and what that actually means is that it tries to conform to your foot and holds no water at all.

It’s worth pointing out early on that when you get to the laces you should immediately replace them.  I left them as is for 3 races and I re-tied them in the middle or beginning of all three races I wore them at.  Some suggestions for replacement are Lock Laces

which I reviewed previously here. Or if you don’t like the locking elastic solution look into Bubble Laces

My first and most irrelevant race, as a test, that I ran in these was the Spartan Race at Citi field which is a stadium series race and bone-dry.  Despite that they felt nice, light, and were very grippy on the few climbing obstacles like the wall traverse, rope climb, cargo net pyramid, etc.

I next put them to a serious test when I took them to the wettest race I have and likely ever will run – The ABF Mud Run. This race was only 2-3 miles long but there was literally over 1 mile of walking in waist high muddy streams. Added to that was the rolling mud, jumping over logs that were across water, running in a swamp and so on.  They performed admirably and dried fast once the race was finished but there was never really a stretch of ground that gave them a moment to dry during the race since it was mostly in water or mud.  I did find out two interesting things besides the fast drain speed – while soaking wet they didn’t hold much water since they are so thin and that they have a problem keeping out debris.  After leaving the water it was like I was just filtering debris through the various ridged bends in the shoe. I think this is happening because the material are so synthetic and slightly stiff as not to absorb water that they don’t bend very naturally, as well as the even more ridged fit frame in the mid foot that is supposed to add durability and support. See the photo for an example of what I mean: 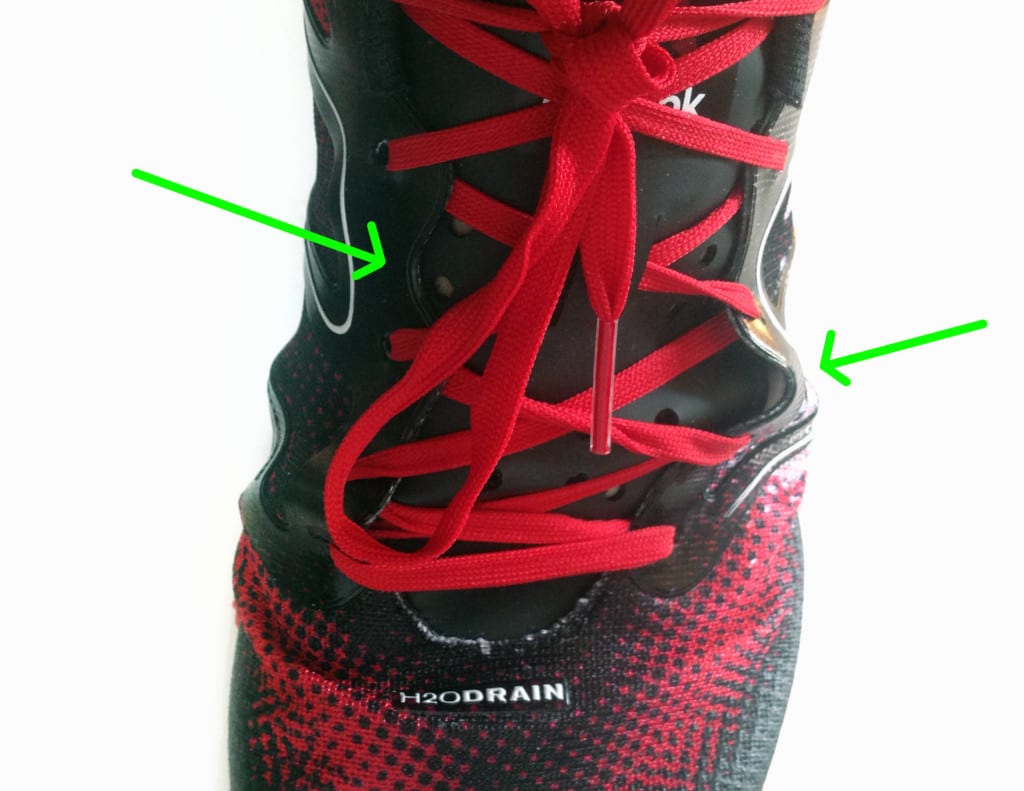 The next race I  ran them was a more standard type of obstacle race, it was put on at the Reebok headquarters in conjunction with Spartan Race. There was mud (it was raining) but no water obstacles here so it was a decent test of their grip in mud which was great.  They didn’t cake up on the bottoms at all.

Next up at the warrior dash I finally tested them like they were clearly meant to be used. We started with some water crossings and continued to go in and out of water obstacles a few times. After each water obstacle they drained the water fast and within 400 meters or so the shoes always felt almost completely dry.

At The Lost Tribe Expedition 12 hour race it started with crossing a rapid stream and then two more in the first hour. This was a great time for them to shine, everyone else had soaking wet heavy duty hiking boots. No matter how good your shoes keep water out, waist high water soaks all shoes. But this is where I also exposed one of the shoes weaknesses. Since the race went from dusk until dawn I was slamming my feet through rocks in the dark. I gave the shoes their first little rip, see here: 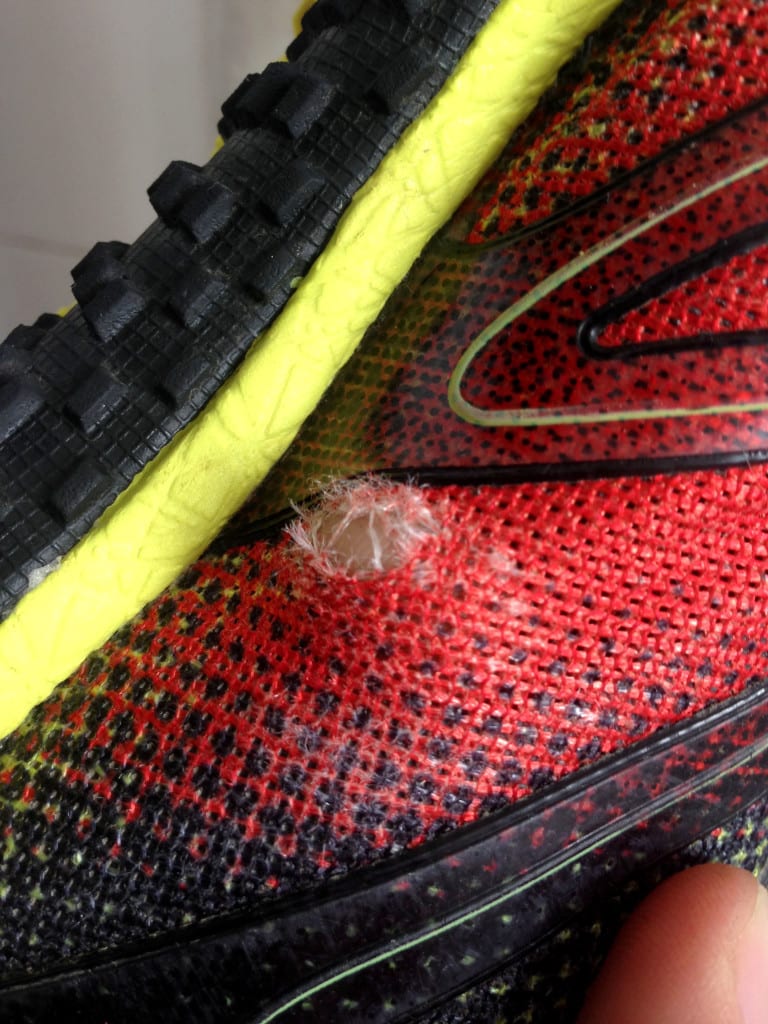 Three races later and they kept working with all the ins and outs listed above. But I did in the meantime order a new pair from Reebok to replace the hole and future holes that would be forming. I put a nice long rip in them at the last race I ran and now will be having to patch them up with some JB weld

and tape on the inside.

After patching them and removing the tape when the JB weld dried I found the area to be a little stiff since I did use a product like JB weld. But the up side was that after I cracked the solid epoxy area in a few place is that the patch held up and didn’t feel too uncomfortable. While this isn’t ideal that the shoes rip so easily they are able to be fixed for a handful of dollars.

I though it would be worth it’s own mini section for these shoes since they are so good in the water. The base weight of the shoes for a size 9 is 248 grams. When fully submerged and then weighed instantly they come in at 360 grams. That’s only 1.45 x their dry weight when fully wet, and after 2 minutes of hanging to dry they weigh in at 322 grams which is only 1.3 x their dry weight.  Phenomenal drainage speed.

Reebok entered the trail running / OCR shoe market with a surprisingly strong shoe. There is even talks already about a revised edition in the works which will hopefully fix the issues the shoe did have. These shoes beat all other shoes in the water drainage department which ranks as one of the biggest issues for OCR shoes. They would lose head to head with other shoes when it comes to the durability and terrible laces. I will likely wear these over my Inov-8 trail shoes for most shorter wet races.

Other shoes to consider 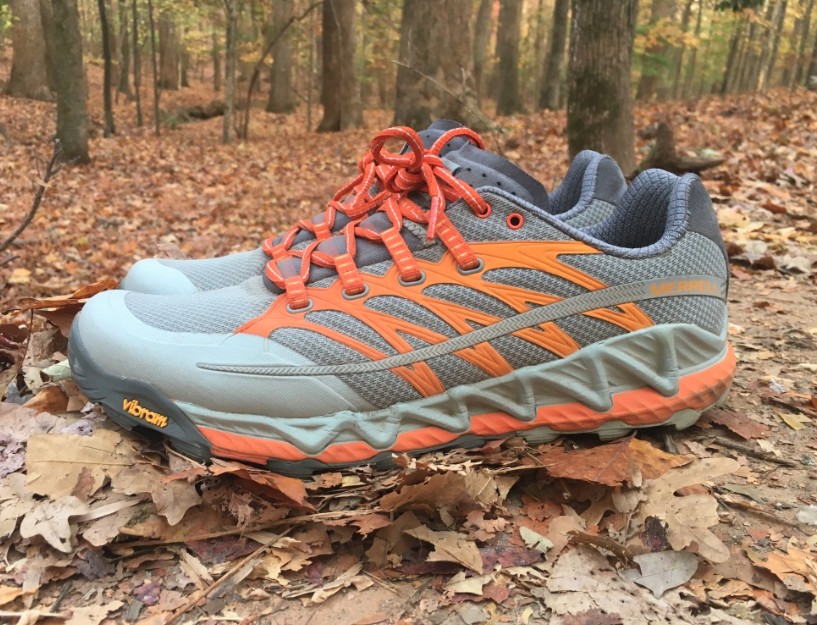 Merrell All Out Peak Review

The Merrell All Out Peak are the 2nd pair of shoes in the “All Out” line, that we… 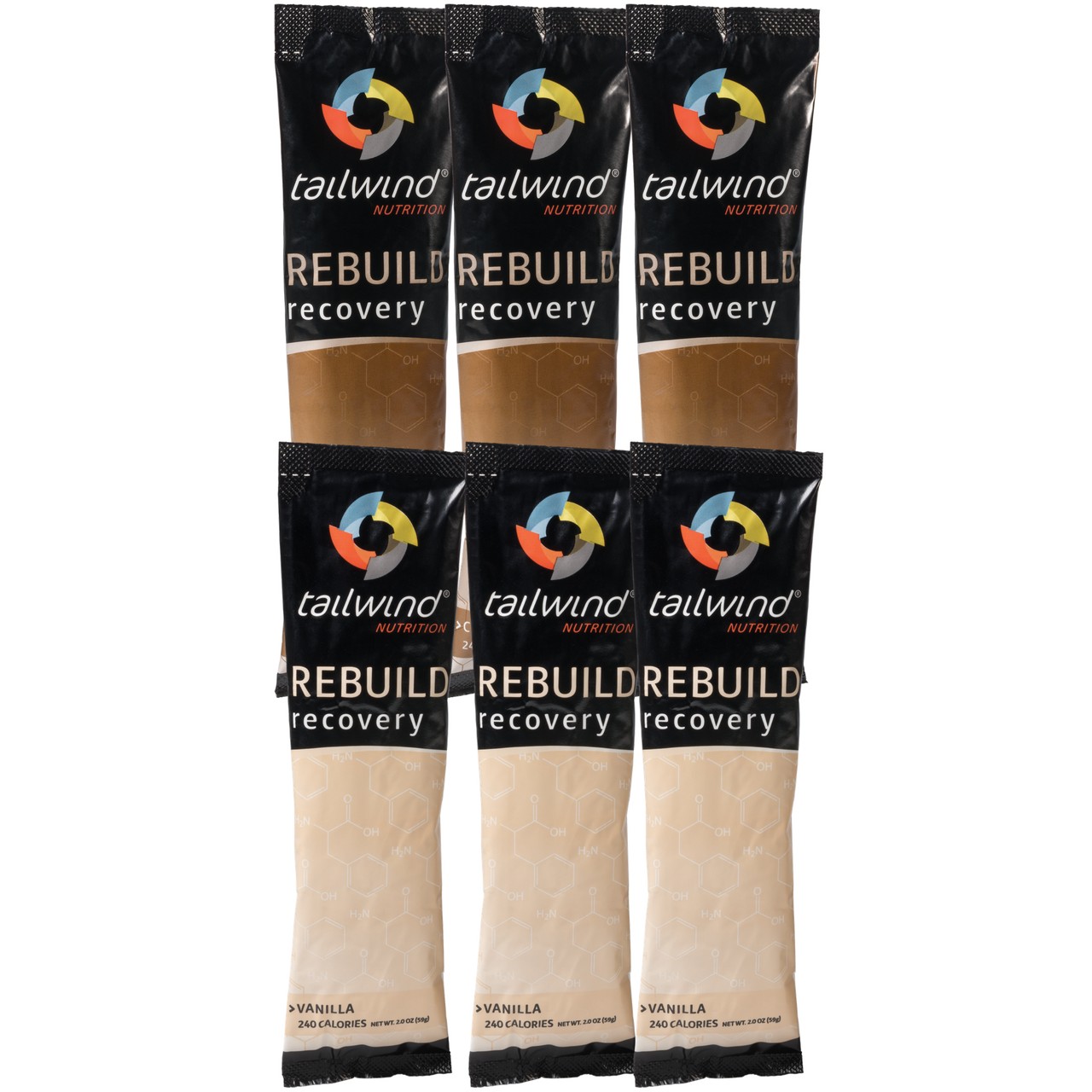 On race day, my pack always has a few standard items in it – Gels (gross), a Snickers… 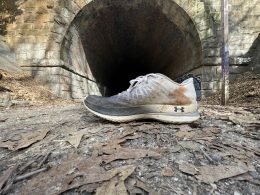 The majority of shoes I own are trail shoes. Despite living in the city and many of my… 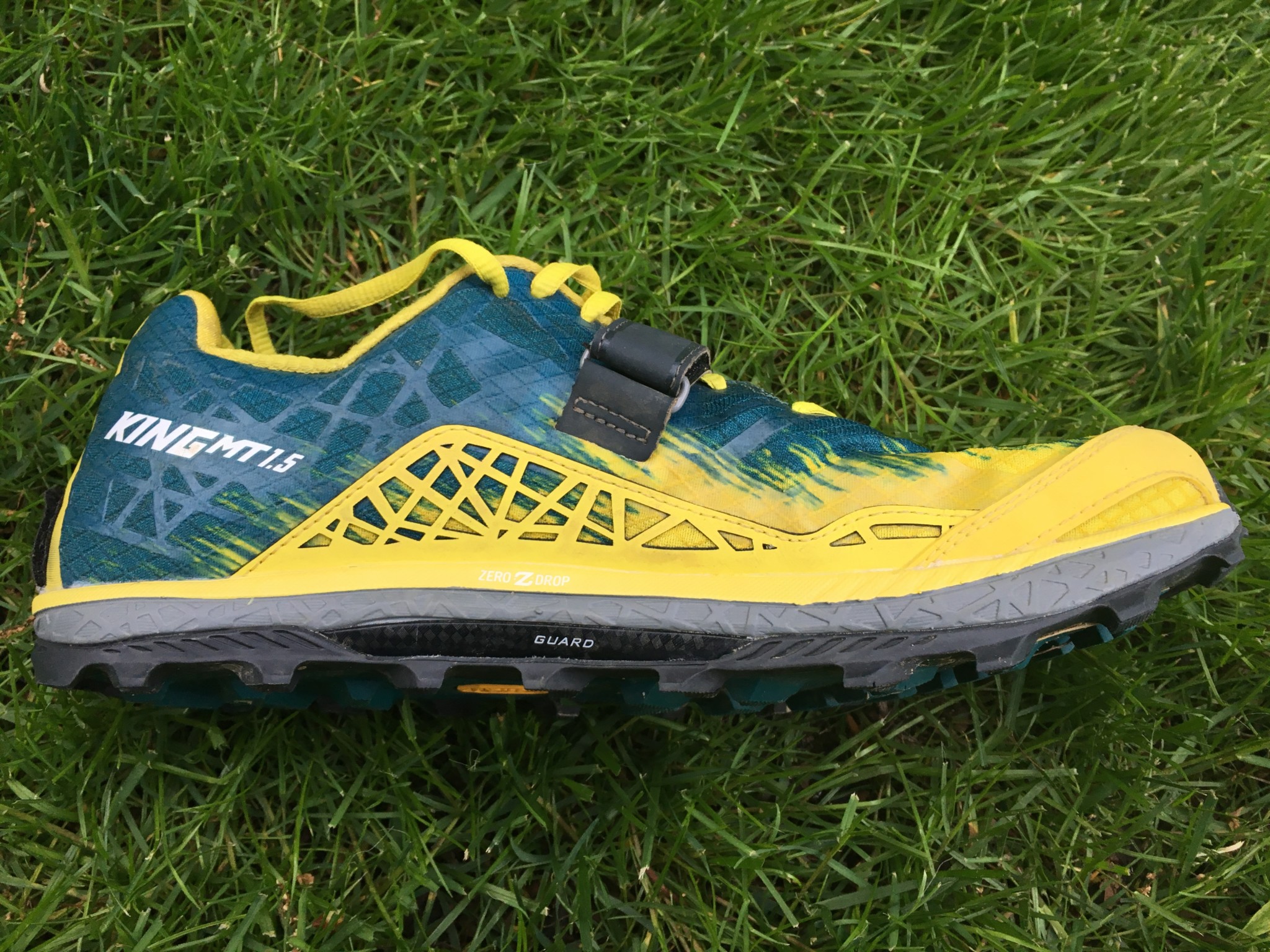 The Altra King MT 1.5 is the second edition of the King MT line. When the original King…