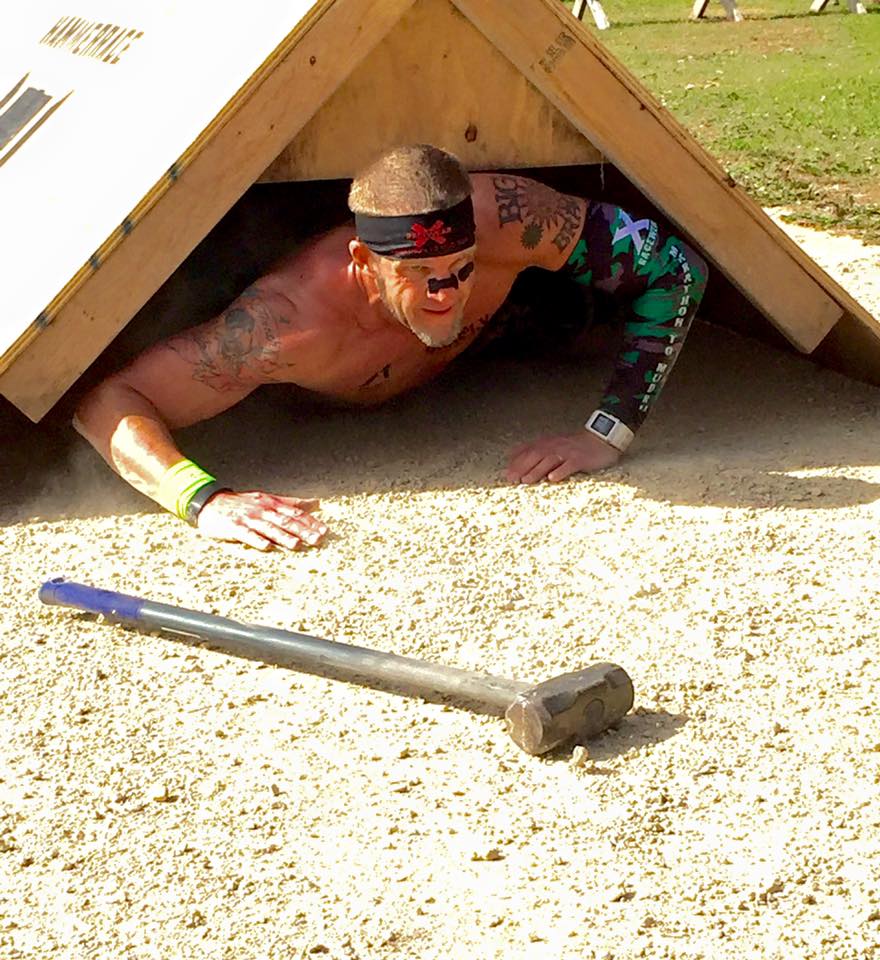 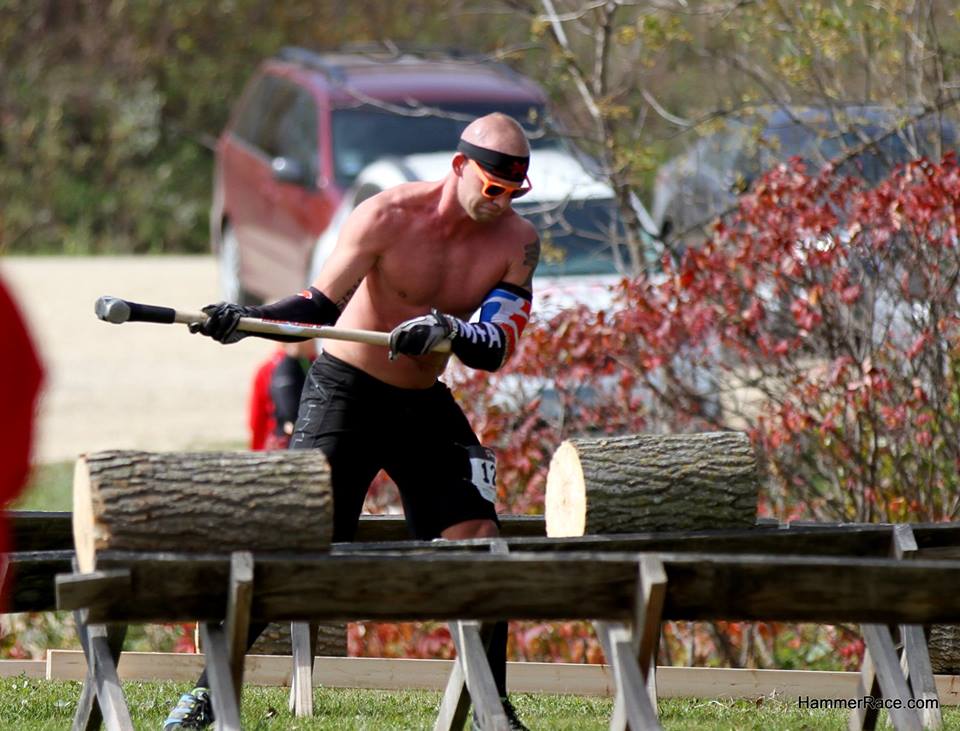 The 2015 Hammer Race was held October 10th in Zumbro Falls, Minnesota on a crisp 70 degree day. Billed as an obstacle/terrain race athletes have a choice between Elite and Open heats. Open heat choices included a 5k or 10k choice, along with a team race option. What drew me to this race wasn’t the beautiful, hilly terrain or the obstacles; it was the fact that you got to race with your own 8 pound sledgehammer throughout the race! Yes, 5.5 miles and 676 feet of elevation gain, along with two river crossings, all with an awkward 8 pounds in your hands for the duration of the course. Think Spartan Sprint difficulty with a sledgehammer added in.  The Elite race started at noon, followed by the open class long and short heats 10 minutes later. Overall there were just under 200 athletes participating in the days’ activities. 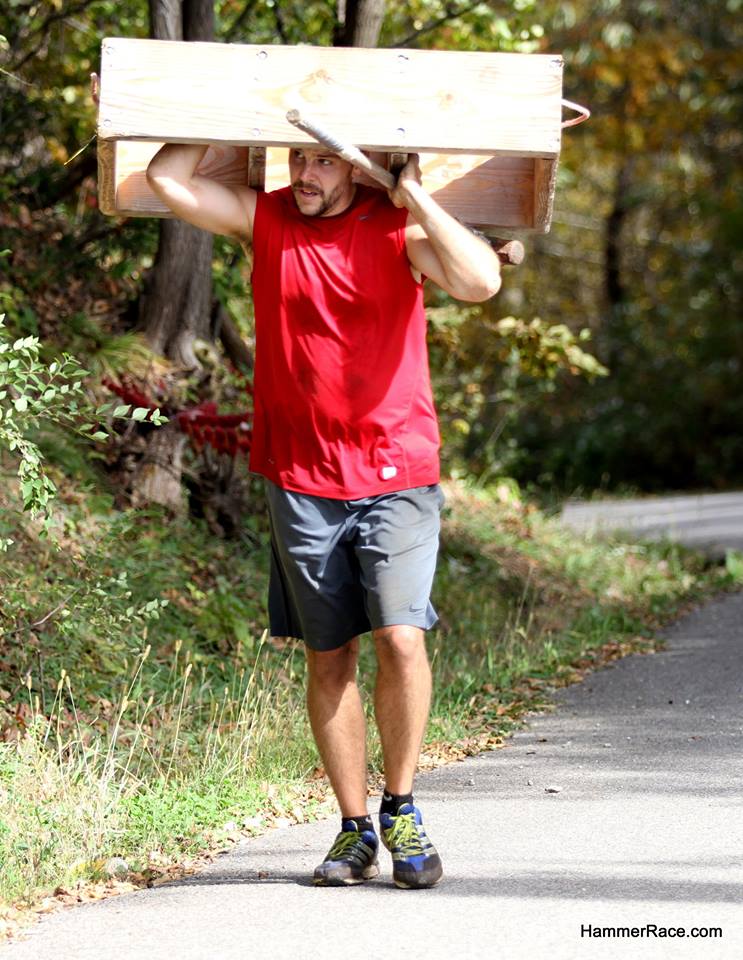 The course started along the edges of the Bluff Valley Campground and quickly led down to the river where a tractor tire flip for 15 repetitions was waiting to greet us. Heading back up and down the narrow, rolling trail we ended up at a thigh deep river crossing where the water temperature was brisk, to say the least. Back up into the woods, the next obstacle was one I personally thought could have been left out. There was a section of woods taped off where racers needed to find the “black door” hidden among the trees. Athletes collected a wrist band after going through an actual “black door” hung between two trees, proving they found the proper way out of the woods. This was based more on luck than anything, and didn’t really have much to do with obstacle racing. 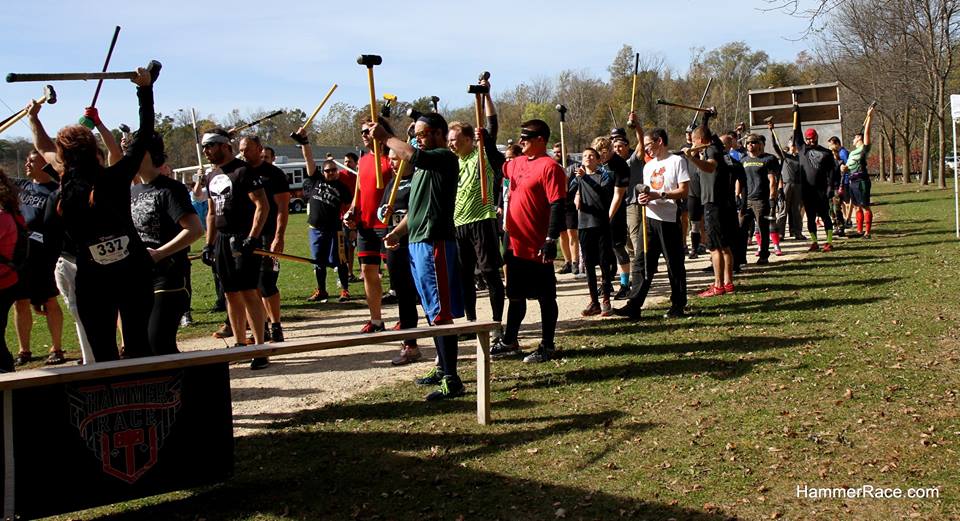 After receiving your wristband you were back into the woods and hills until coming upon one of the three places along the course where you needed to use your sledgehammer. Large wooden blocks were placed on top of “bucks” where you needed to knock the block from one side to another with your hammer. This really proved to be a great test while winded. Curving back towards the campground through the woods and hills, Hammer Race tucked in numerous 6 foot walls to climb over and low crawls to scramble under. There was another river crossing where the “buck” and block to hammer was actually located in the river. 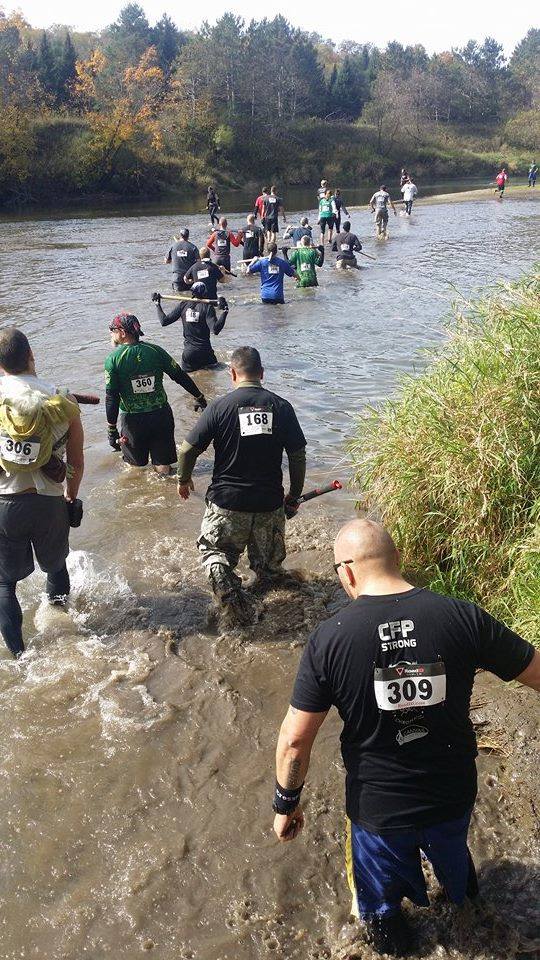 One other unique aspect of the Hammer Race was a series of wooden racks (some filled with cement blocks) that you had to drag up and down hills, all while still carrying your sledgehammer. This was a brutal test of strength that had many of us stopping to catch our breath and reposition our grip. The back end of the course was loaded with steep hill climbs along small game paths and ravines loaded with moss-covered rocks, which made footing very treacherous.  There was very little actual trail running on the course. Racers were pretty much just choosing the path of least resistance along the flagged route. The finish area was stocked full of regular OCR style obstacles, all needing to be completed while still holding onto your sledgehammer. Small hurdles, two A-frame climbs, a low crawl, and two different blocks on “bucks” to knock around to really drain you ended the course. 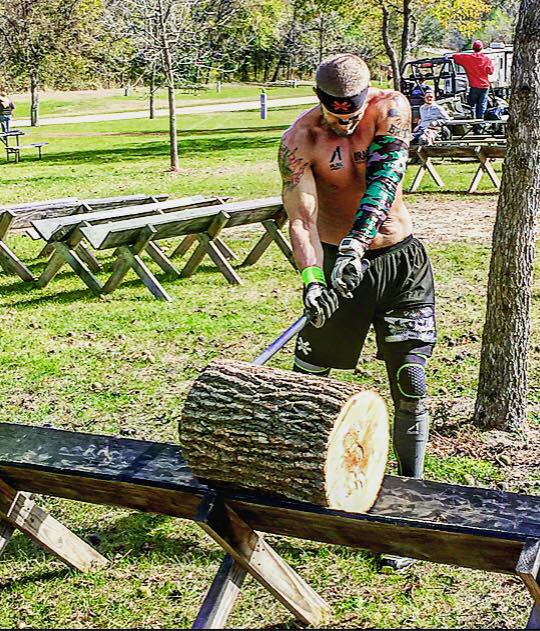 After crossing the finish line you were awarded a large medal for yourself, while a smaller one for your sledgehammer was to be found in your race packet. The Hammer Race was well put together, the music was great, and the course was clearly marked. The volunteers were possibly the best I’ve encountered. They were all very helpful, attentive, and knowledgeable. Photographers were spaced out along the route to take great pictures. Unusual for OCRs, but welcomed, were hot showers for cleaning up. In all areas, everything was neat and clean. 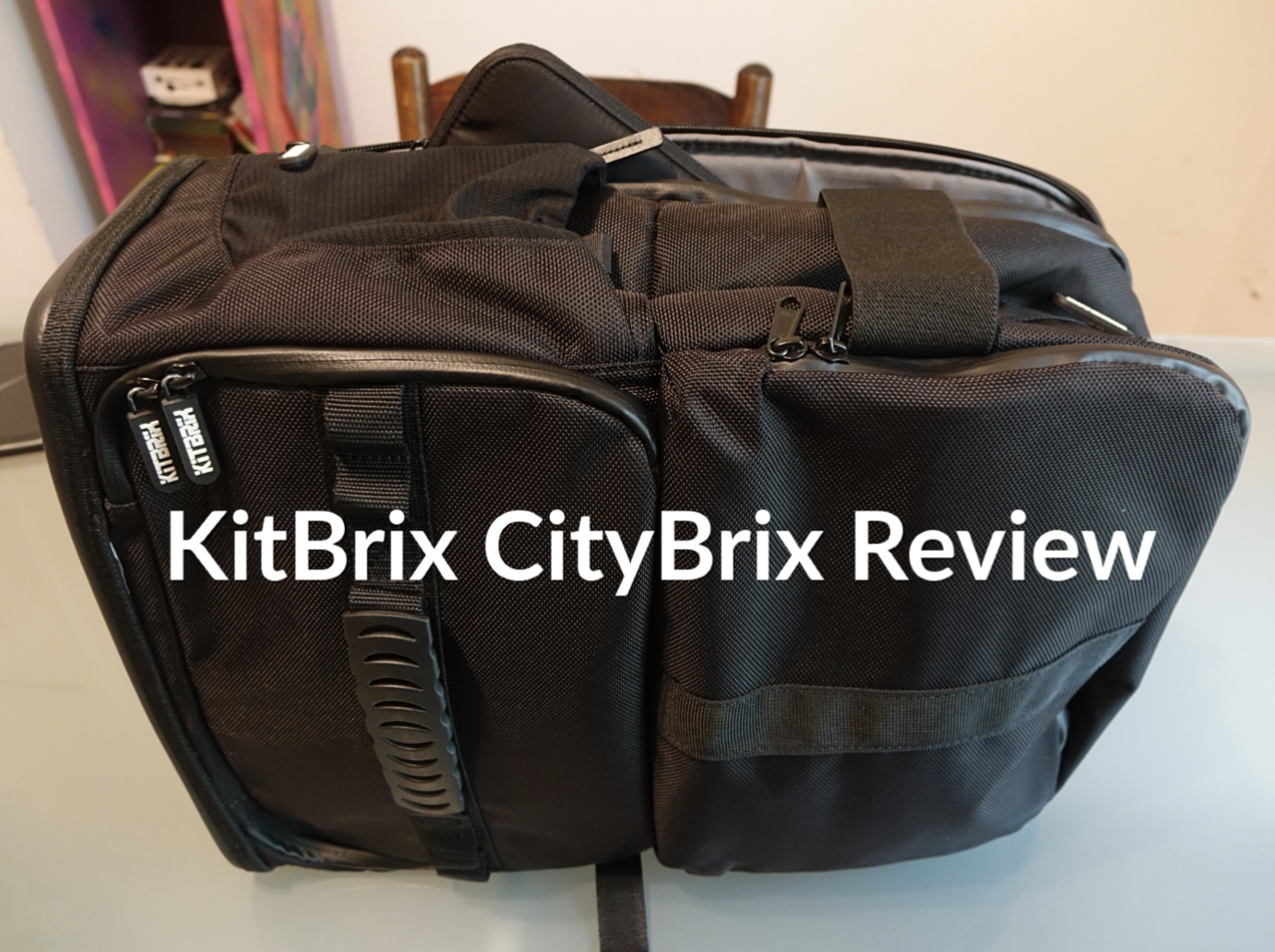 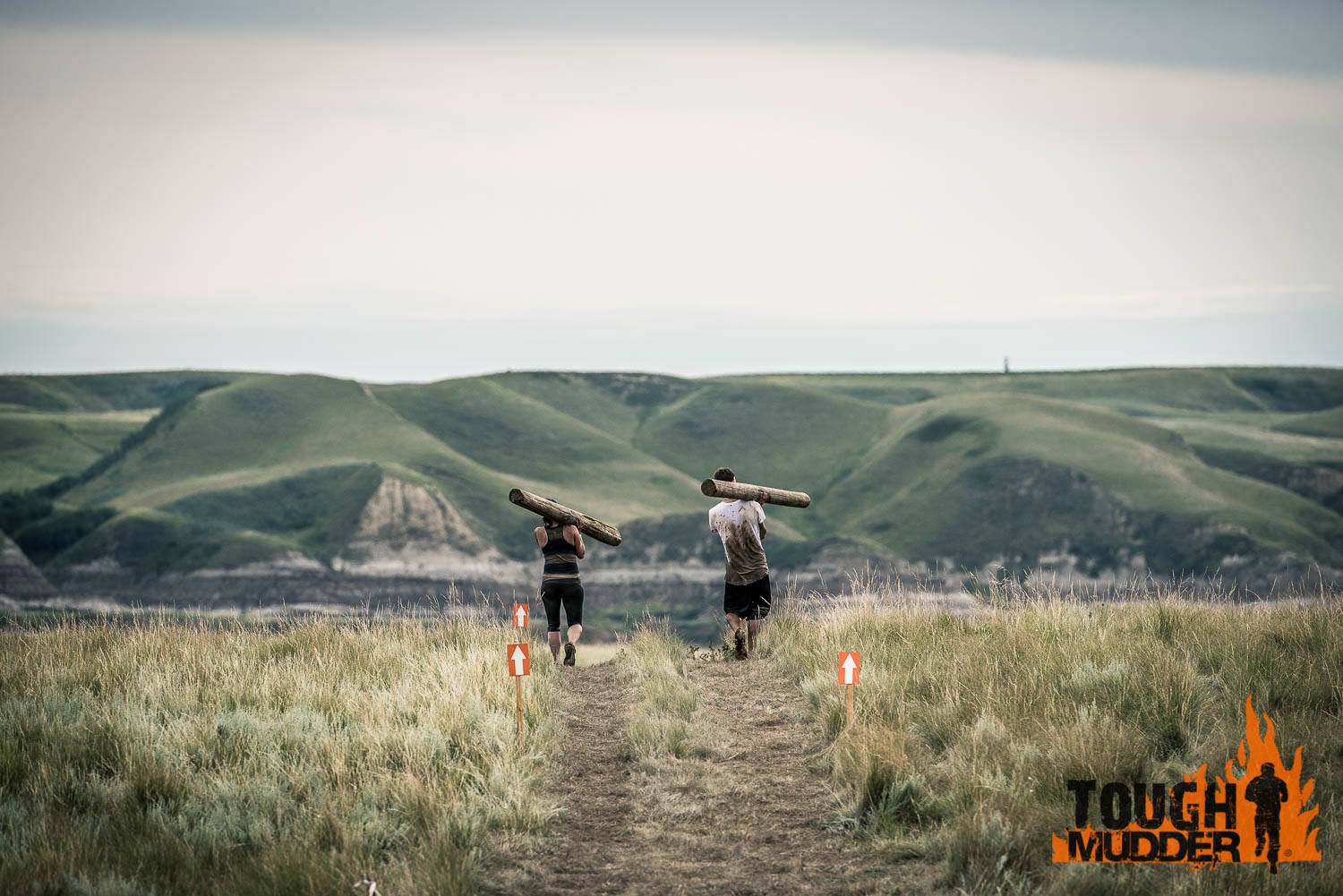 I have never understood Tough Mudder. I get it, but I just never felt like doing it until… 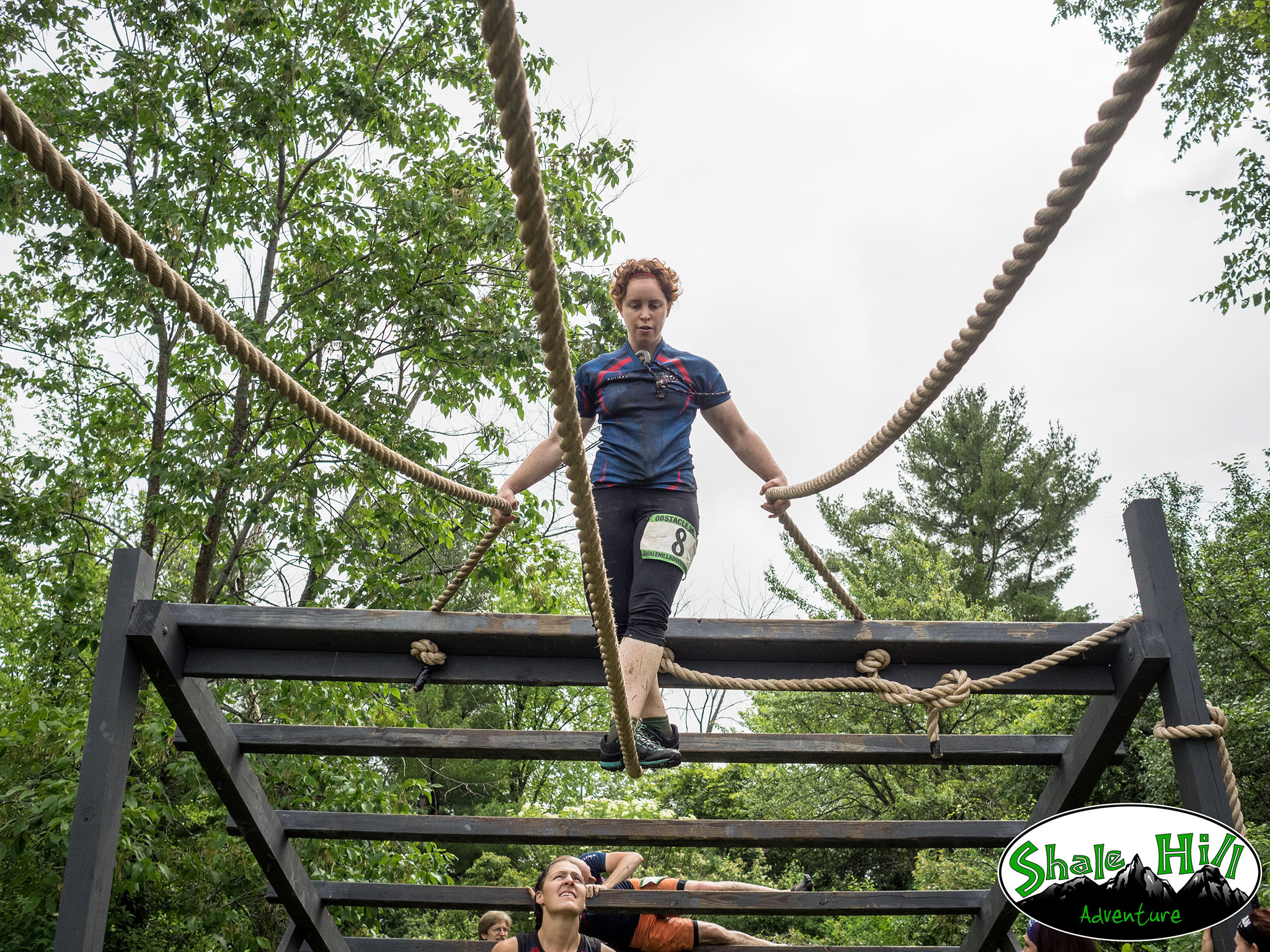 If you’ve been involved in obstacle racing for long enough, chances are that you’ve heard of Shale Hill,…