This month’s OCR transformations introduces Caitlyn McCracken. High school athlete turned lazy college student, Caitlyn over came multiple physical ups and downs in order to find her happy place. Taking the weight off her shoulders allowed Caitlyn to flip her switch and find a new passion…running. Caitlyn’s story demonstrates how much the mind and body interact to make a better you!

Caitlyn McCracken is a military brat who grew up in multiple places. Although she grew up mostly in Clarksville, Tennessee when her dad was stationed at Fort Campbell—Franklin, Pennsylvania is where she considers “home”. Caitlyn was very athletic throughout school, which kept her from being overweight. In 9th grade, she became addicted to an unlikely sport for a female. She signed up for boys wrestling randomly one day and it quickly became her passion for the next four years. Mentally, Caitlyn was well kept together. However, the physical demands put on her from being on an all boys wrestling team weighed heavy on her stress levels. In order to succeed amongst the boys she had to stay in the lower weight class. 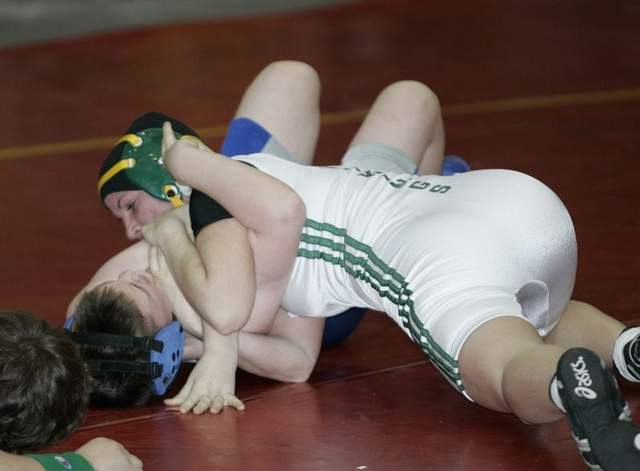 Throughout her four years of high school, Caitlyn wrestled in the 112-pound weight division. As a growing young girl this became physically and emotional draining to maintain. Her weight class did not come easy to Caitlyn. In a way, she had become abusive to her body due to the weight fluctuations she had to go through in order to maintain such a low weight class. When asked if she ever considered moving up in weight class Caitlyn responded, “no, I didn’t consider moving up because I knew I could win matches at a lower weight”.

During the off-season she would weight train and gain muscle, thus causing her to also gain pounds. When the season would approach again, Caitlyn would have about 18-pounds on average to try and cut to make her wrestling weight class. This vicious cycle continued until her coach made her stop lifting and start running. Caitlyn joined the cross-country team (even though she hated running) to lose all the weight she worked so hard to gain for muscle mass. She quickly began battling the difference between strength and a low weight even when her body style wasn’t made for it. “It was the most rewarding thing in the world…to have my hand raised at the end of a winning match”, said Caitlyn.

When Caitlyn went to college, she let fitness fall to the wayside. “I enjoyed my meal card and living in downtown Pittsburgh. I mostly went to class, napped, and ate”, said Caitlyn. Unlike her high school days, she only went to the gym maybe twice a week and became less and less active. Other than a racquetball class for an extra credit, she did not partake in any physical activities like she once loved. 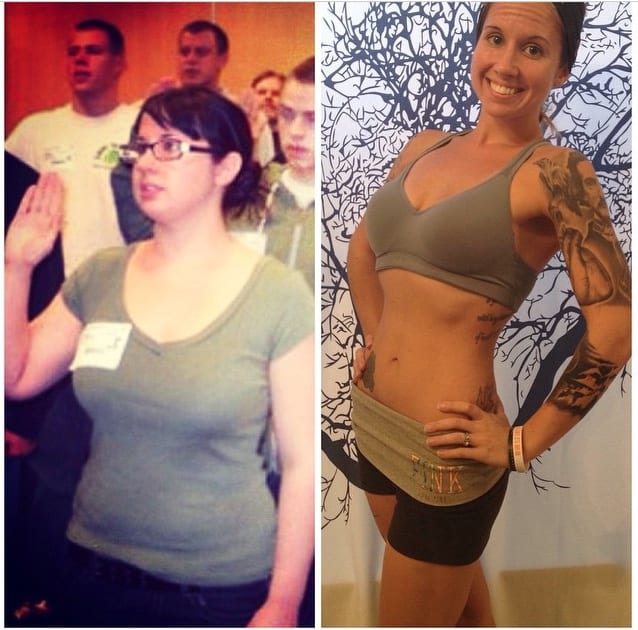 After a year and a half, two different colleges, and no idea what to do with her life; Caitlyn decided to join the Air Force. Although the military is known for “whipping people into shape”, that wasn’t the case for Caitlyn. After getting pretty fit in basic training and only having to pass an annual or semi-annual PT test, she quickly ballooned up again. She wasn’t taking her training seriously and just got lazy again. She contributes a bit of “letting herself go” to depression she developed throughout tech school that trickled into her permanent duty station in Tampa. Complacency set in and her habits of eating bad food, being lazy, and having no motivation continued its vicious cycle.

WEIGHT OFF HER SHOULDERS

Surgery motivated Caitlyn to change her lifestyle. No, it’s not what it sounds like…she had always been cursed with large breasts (too large for her barely 5’2” frame). Her entire life they had literally been weighing her down. They hindered her breathing, running, and anything else you could think of. In the summer of 2012, Caitlyn decided she had enough! After consulting with her military physician due to severe backaches, she was referred to a plastic surgeon. The surgeon deemed her case as a medical issue and the military covered the expenses of the surgery. Surgery didn’t make Caitlyn feel like she was having something taken from her. Instead, she was given much more—a second chance and literally weight off her shoulders. 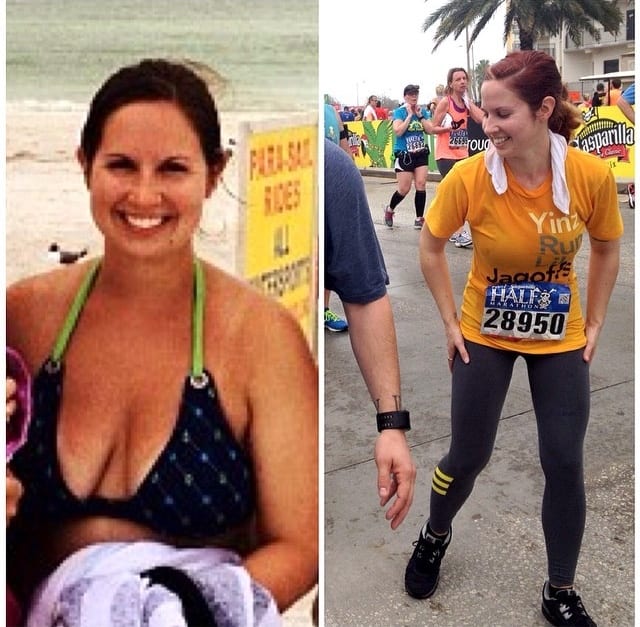 After having complications with her initial surgery, Caitlyn had to go back in for round two. Finally healed, she was able to work out again for the first time. She remembers doing a quick circuit workout with co-workers and feeling like she wanted to do more. So she did! She jumped on a treadmill and ran six miles. For Caitlyn, six miles was obscene, she hated running and she had never ran anything more than required by her PT. She could breathe now, she felt great, and she didn’t want to stop. 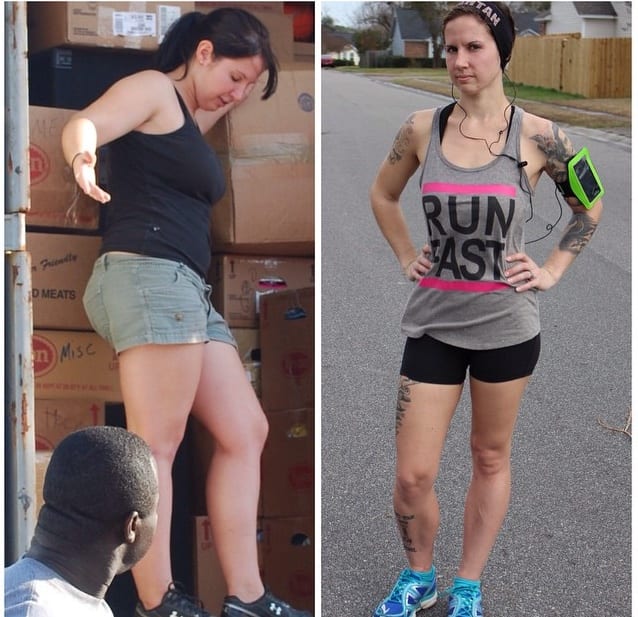 This is when the switch flipped for Caitlyn. Suddenly, she was a runner! She began running anywhere from a half hour to an hour a day on the treadmill with her playlists she would make. Caitlyn bought a scale and began to watch the weight that was so easily gained, fall off. She hadn’t been so excited to watch her weight since her wrestling days. Only this time it wasn’t a “have to” it was all for her and it was for her health.

The first obstacle race Caitlyn ran was the DC Spartan Race in 2014. Her and her best friend signed up with the expectation they would kick ass (they had become seasoned runners by now with several half marathons under their belts). They couldn’t have been more wrong! Both of them didn’t know much about Spartan races and the race drained everything they had. They had no idea how physically demanding the race would be and how ill prepared they were. It was too late to turn back though; they had already signed up to get their trifecta (Virginia Super and Carolina Beast). Caitlyn remembers thinking, “our training had to change quick”! 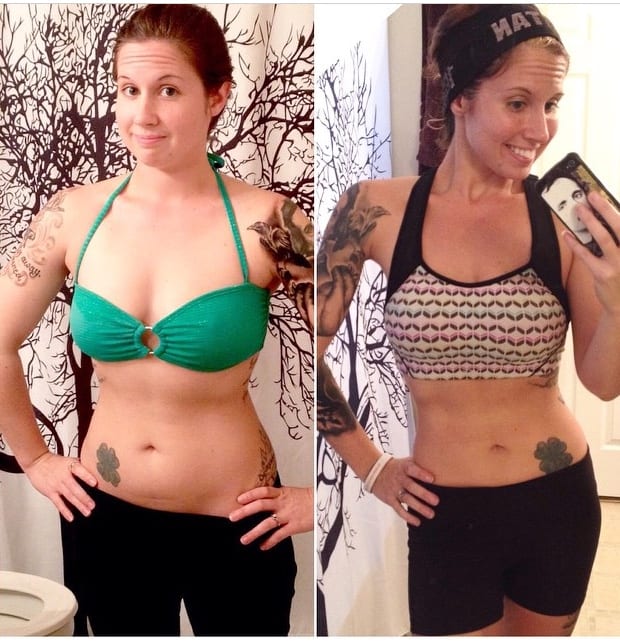 After the Sprint, Caitlyn and her friend began doing Spartan workouts they found online (a mix of calisthenics and running). The Virginia Super was not far after their DC Sprint and the pair was determined to not feel as defeated. However, they knew little of the legacy that is the Virginia Super. Race day was a rainy day, which introduced them to the black diamond that is Wintergreen. The workouts had significantly helped them prepare for that day. Many people didn’t even finish the course, and although it was physically and emotionally exhausting—they managed to finish in less than five hours and the top 20% for their age group. The Carolina Beast was a breeze for the friends. Their Spartan training had paid off and their 2014 season had come to a successful end. Caitlyn already has her 2015 trifecta mapped out and she has met her half marathon time in less than two months! 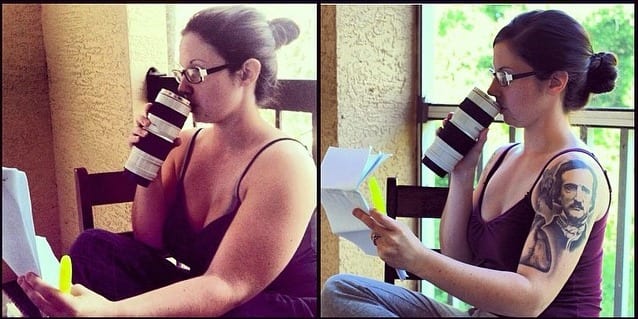 When asked whom she contributes her success to, Caitlyn said “my best friend Chey has helped me along the way. She has been my biggest motivator”. Caitlyn was responsible for kicking her own butt into gear the moment she took charge on the treadmill that day. Chey helped motivate her to sign up for her first half marathon. They also raced for their trifecta together, finishing every race hand in hand. 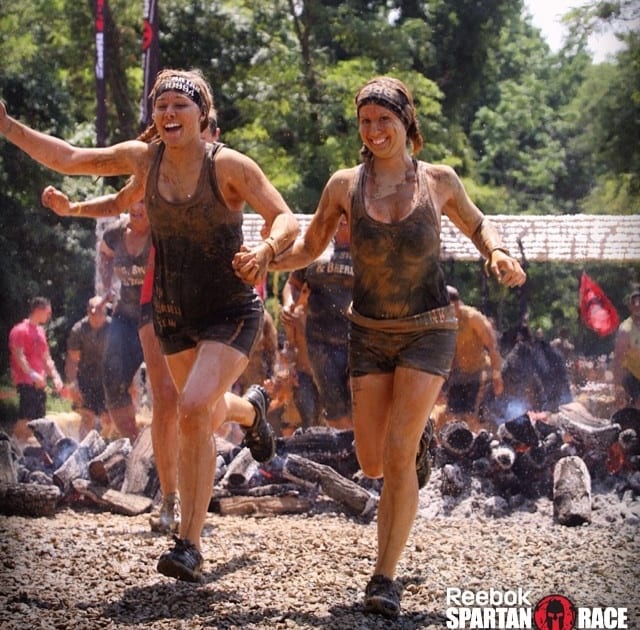 Caitlyn is currently training for a Spartan Race. She does a mix of calisthenics and running Monday thru Friday. Her workouts include sort treadmill runs between .5-1 mile per set and usually 4-6 sets. The calisthenics include push-ups, sit-ups, pull-ups, planks, crunches, squat jumps, mountain climbers, leg raises, oh and don’t forget the burpees! She likes to stick to a simple, but effective routine. When she isn’t training for a Spartan, she tries to run about 20+ miles per week. At her peak she was around 145- pounds, now she is around 105-106-pounds steadily. 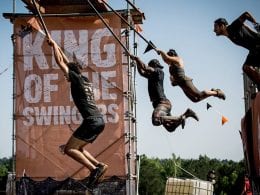 How To Get Physical & Support Your Mental Health For A Race 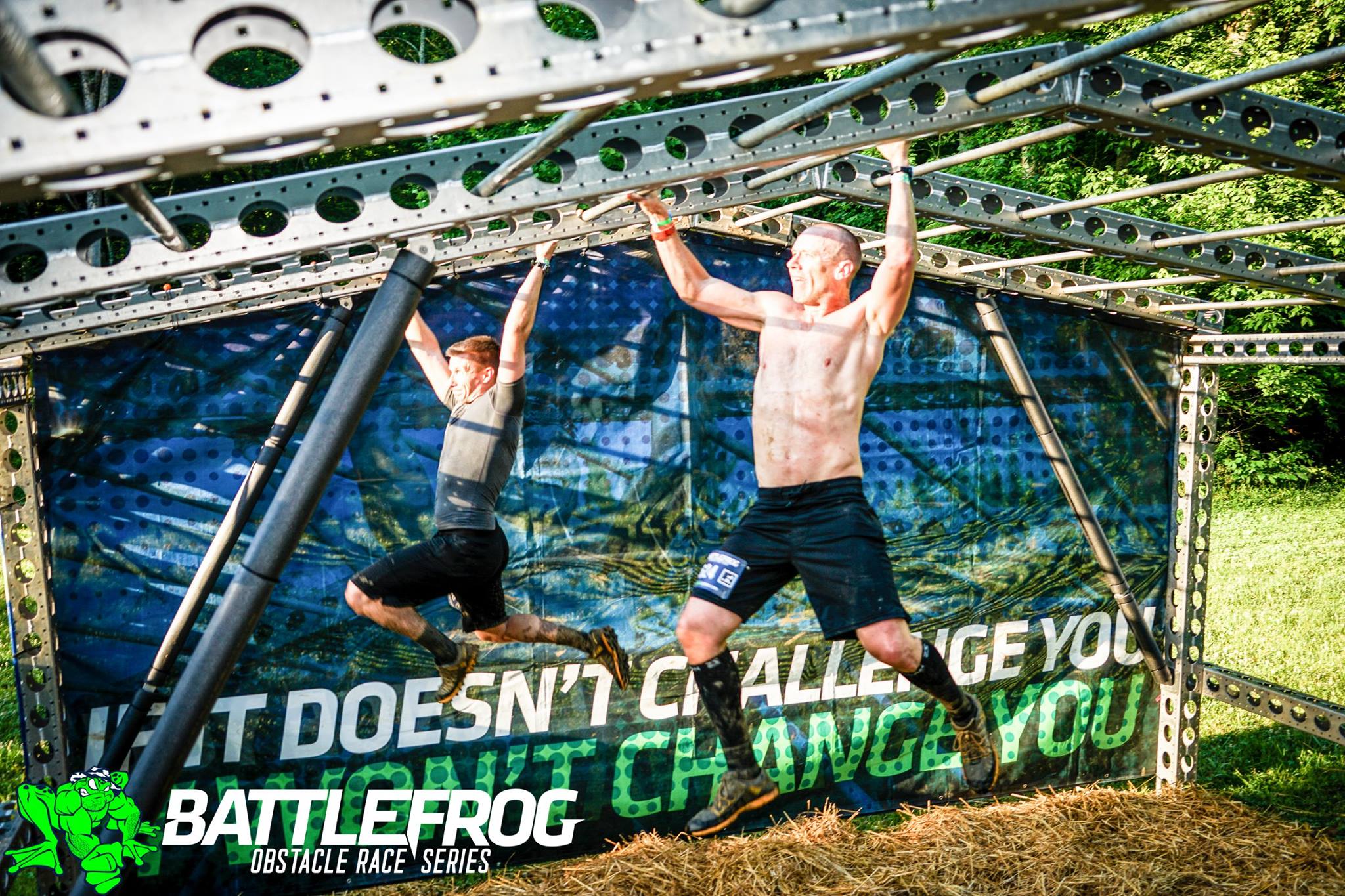 5 Tips For Improving Your Sleep As An Obstacle Race Athlete

All athletes require sleep in order to recover, build muscle, and have a good state of mind so… 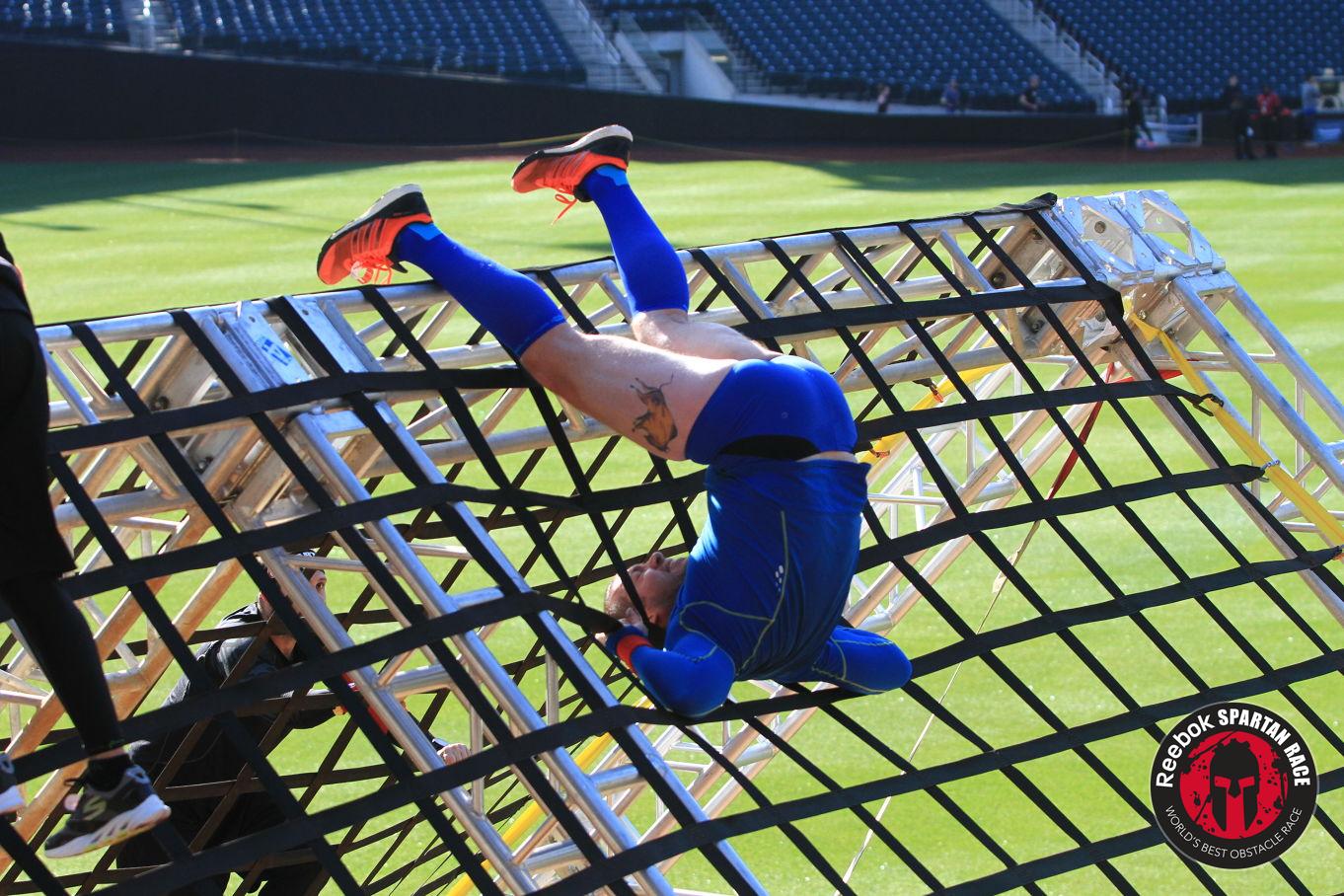 This is the story of my love affair with obstacle racing, and how it all has to come…